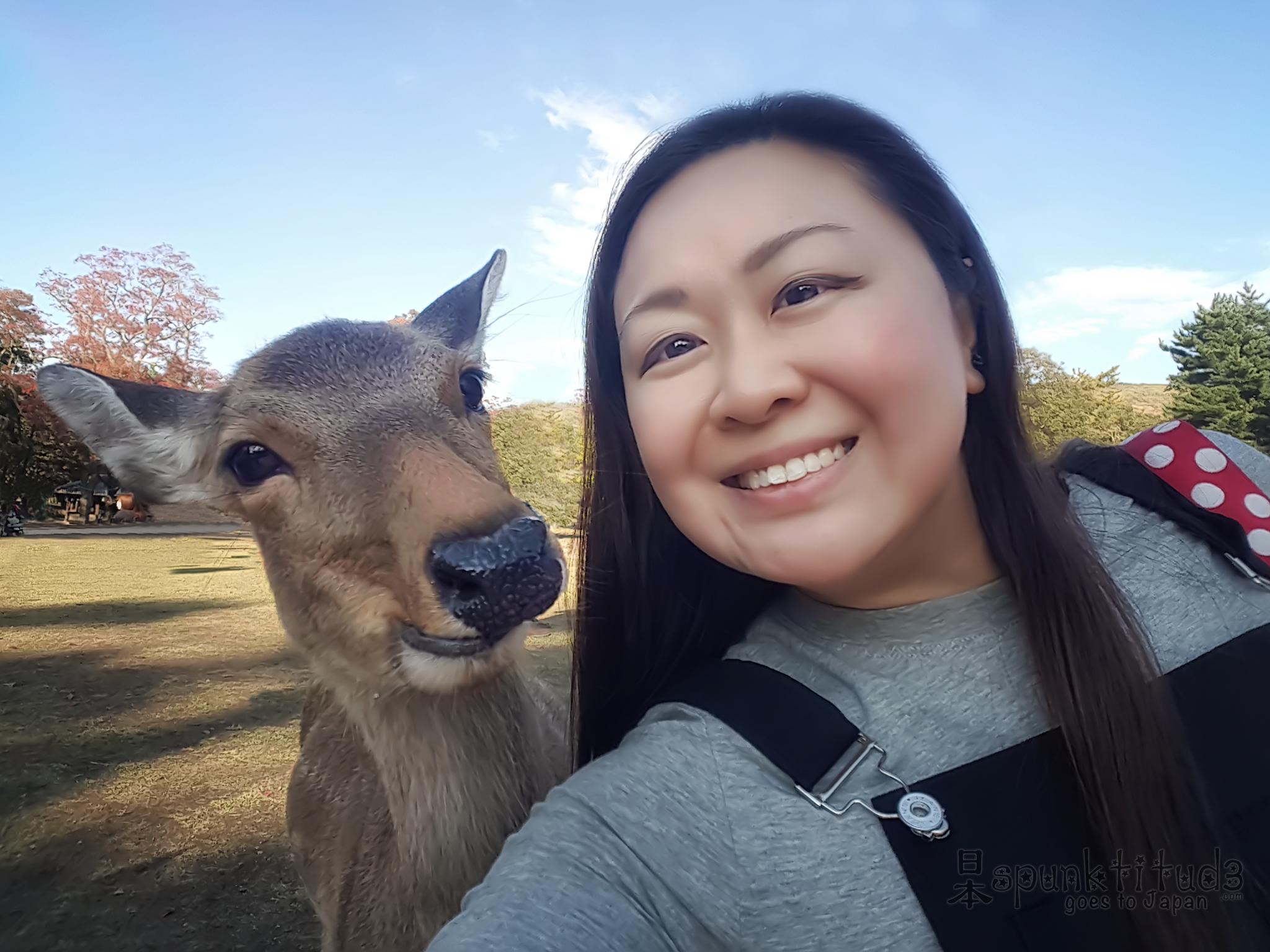 No visit to Nara will be complete without meeting its most famous resident, the free roaming wild deers (シカ ‘shika‘ or 鹿) at Nara Park 奈良公園, which is also the location of many Nara’s attractions including Todaiji, Kasuga Taisha, Kofukuji and Nara National Museum. 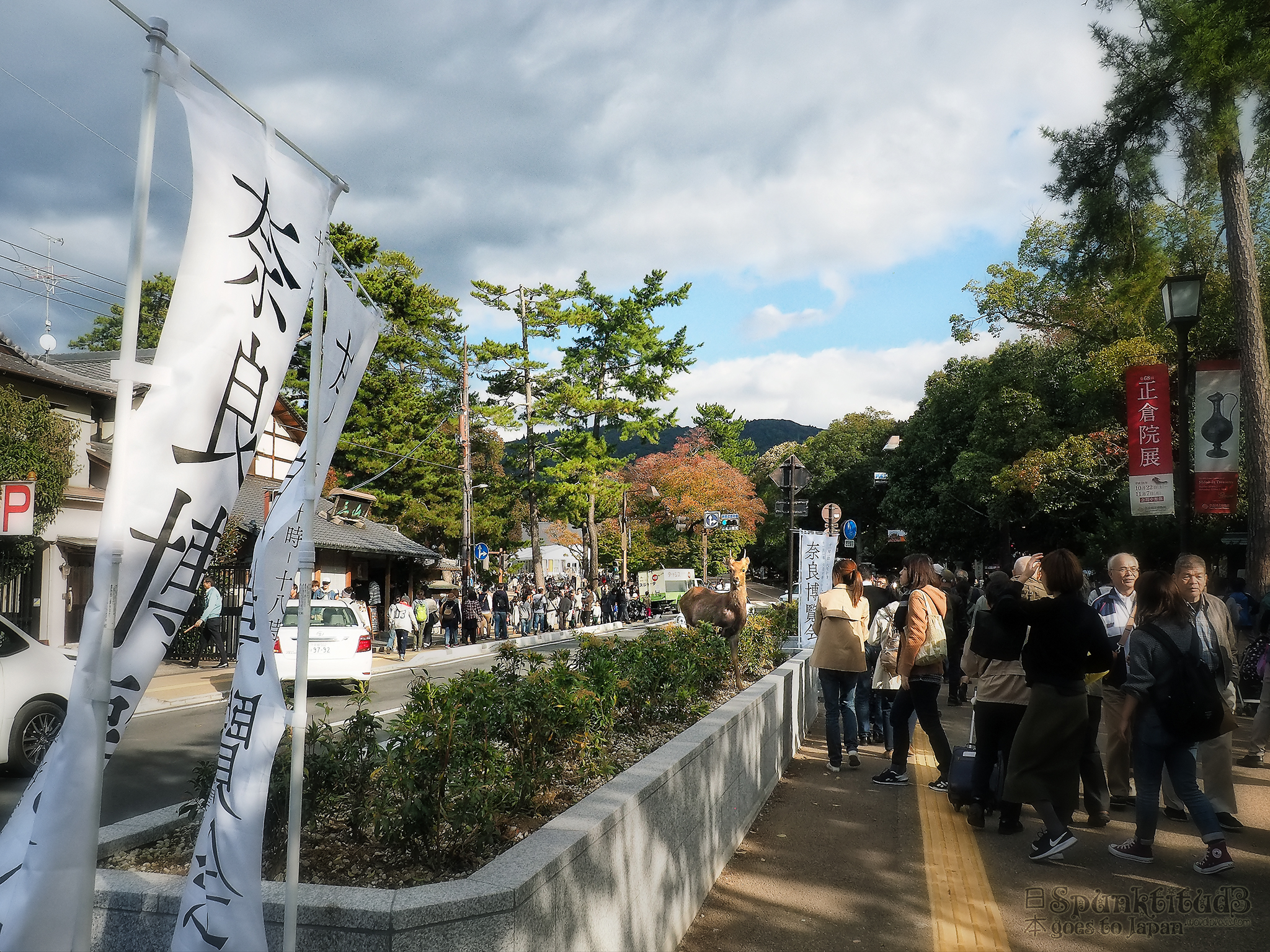 Nara Park is just a leisurely five-minute walk from Kintetsu Nara Station or a a 20-minute walk from JR Nara Station. The park can also be reached by bus. If you are ever in doubt, just follow the deers which are literally EVERYWHERE you can think of, like in the shrubs or even inside a drain. 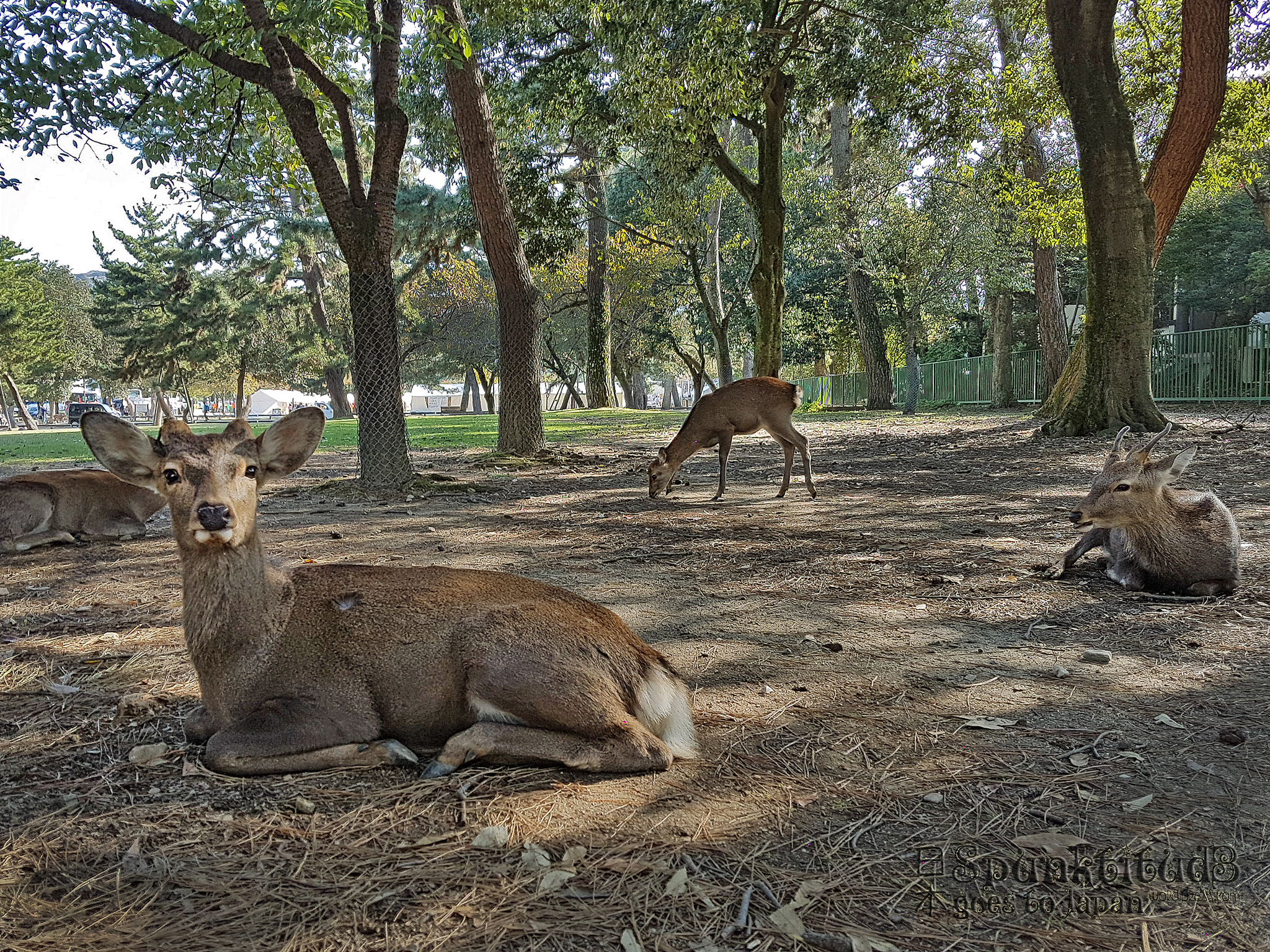 Considered to be holy messengers of the gods, Nara’s 1,200 deer have become a symbol of the city and designated as a natural treasure under the Cultural Properties Protection Law. According to local folklore, deers in Nara were considered sacred due to a visit from Takemikazuchi-no-mikoto, one of the four gods of Kasuga Shrine, who appeared on Mt. Mikasa riding a white deer. Killing one of these deers was a capital offense punishable by death up until 1637. 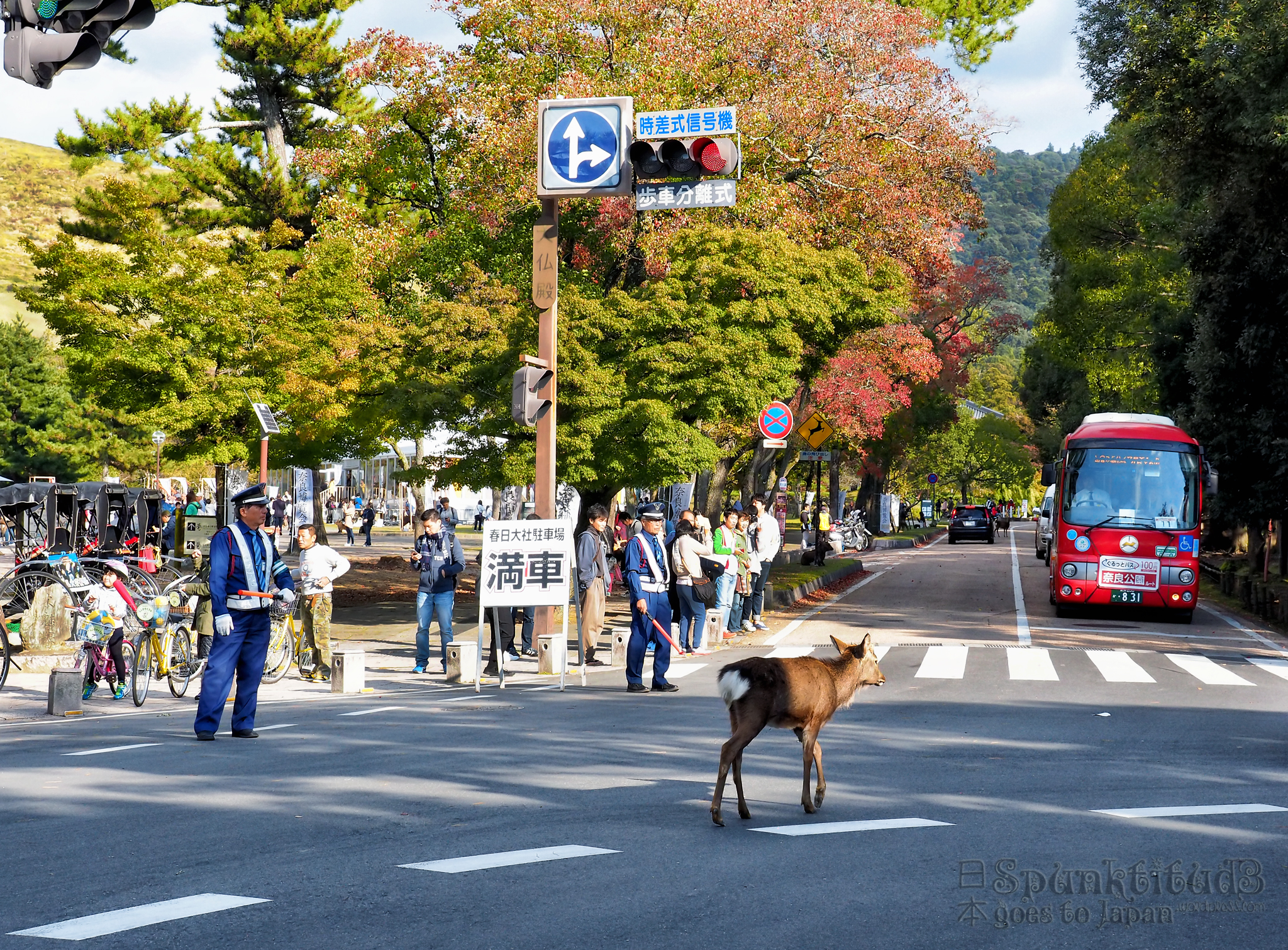 So these deers literally do whatever they feel like. Including stopping traffic. 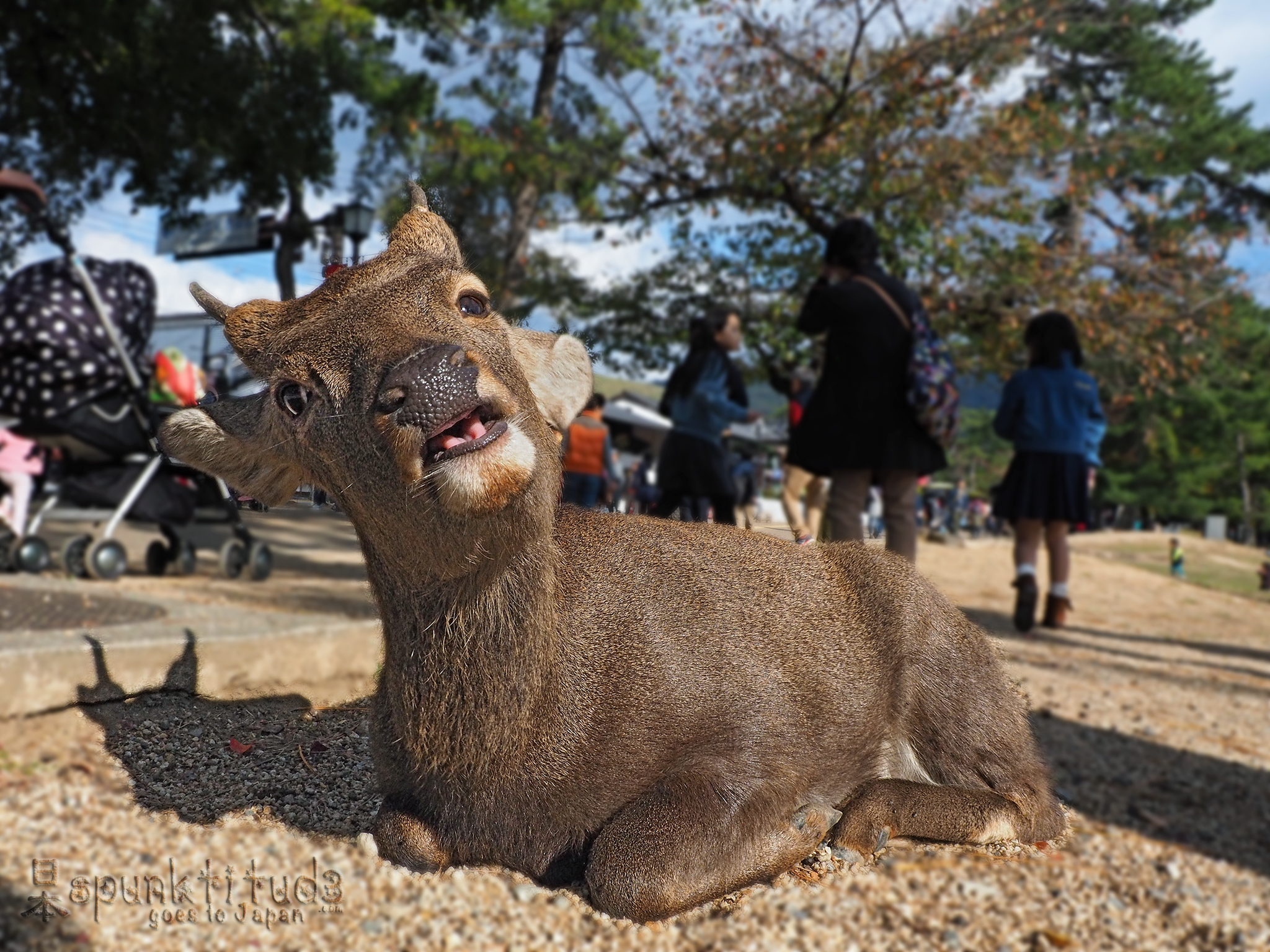 Nara’s wild deer are super chill with people, although they can get a little pushy when you start feeding them. They can be quite a handful at times as well… 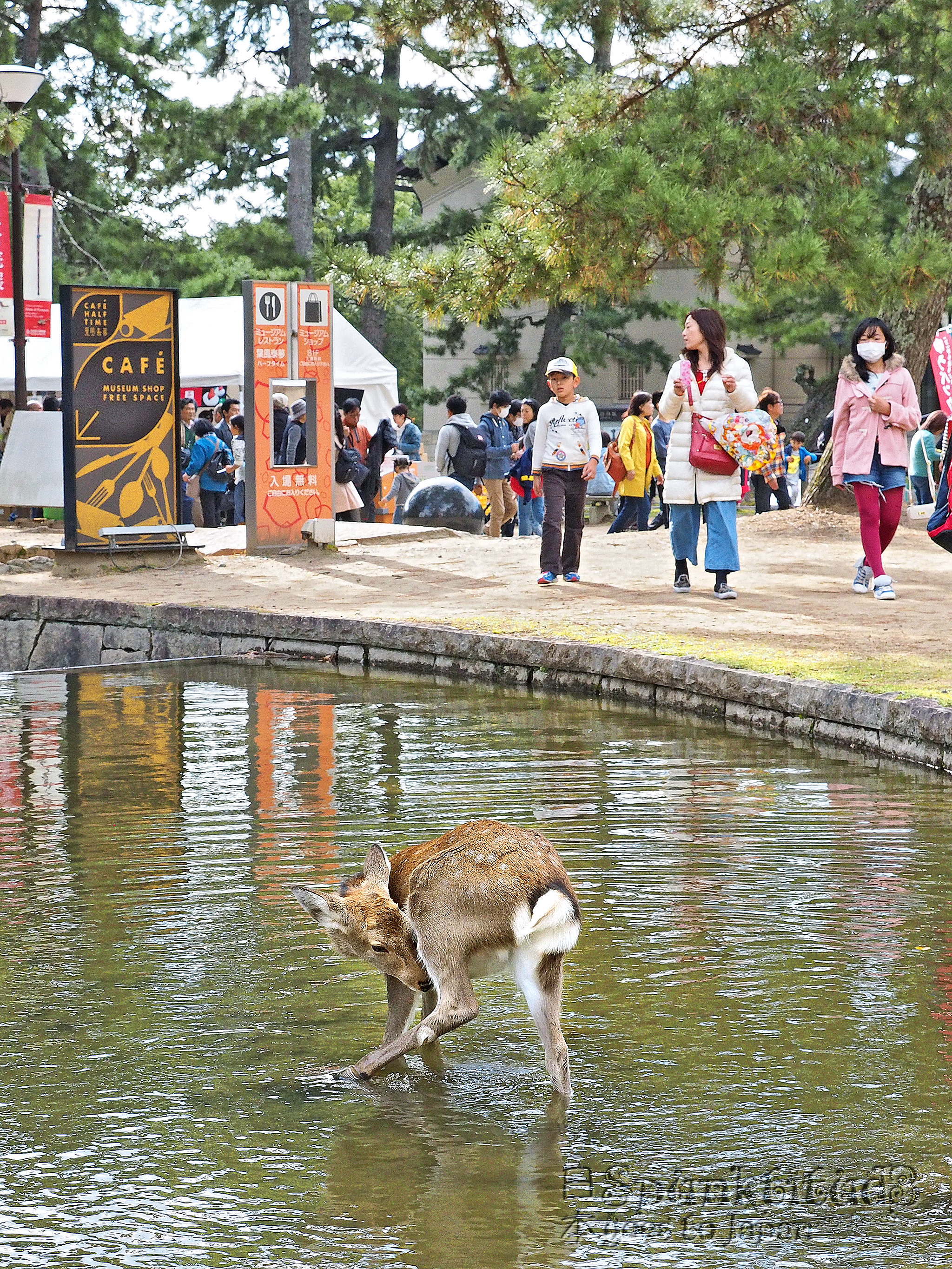 Like this one who happily trotted into the pond just outside the Nara National Museum for a dip. 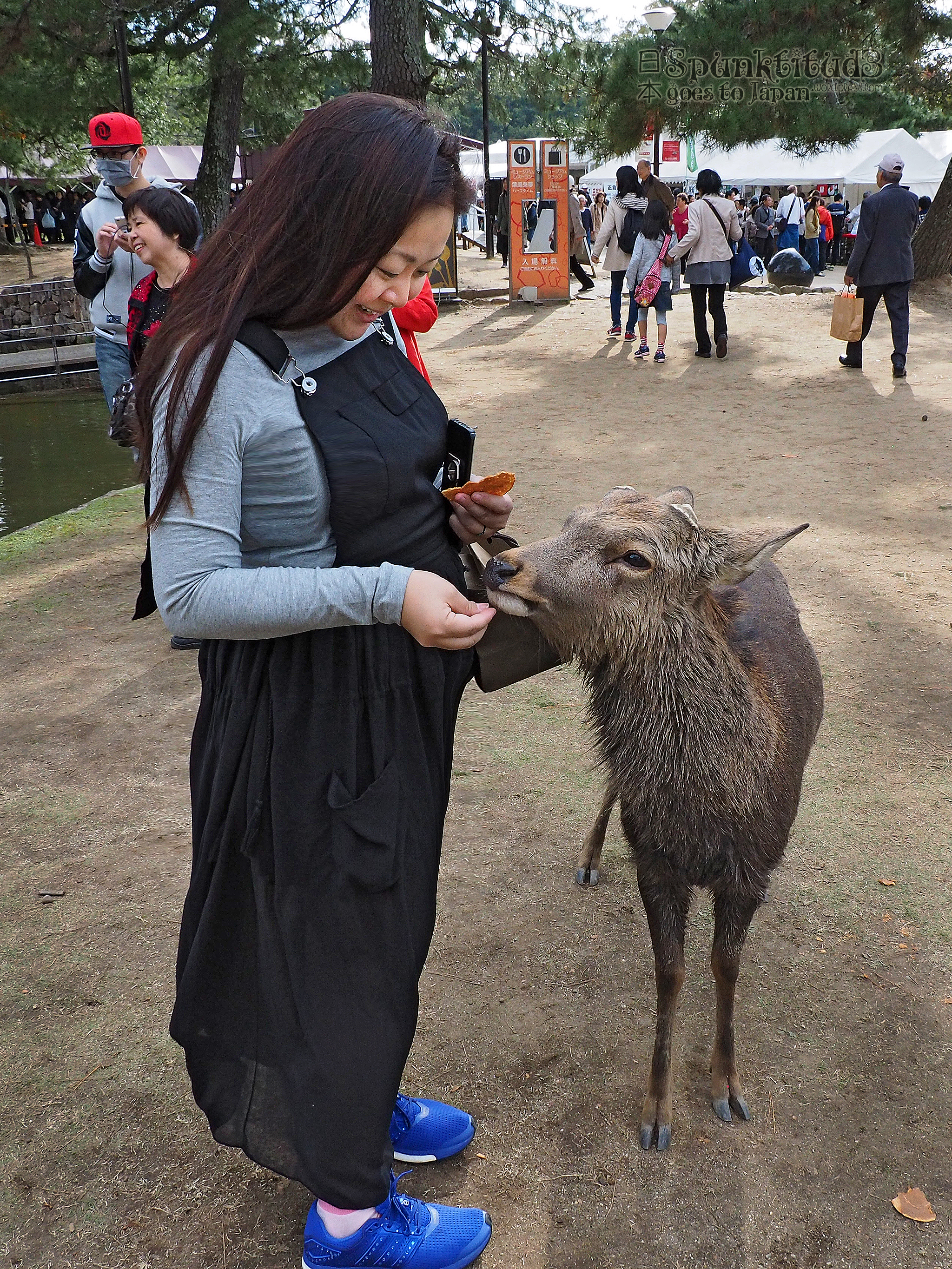 And came to ask to be fed after its skinny dipping. Shika biscuits, which smelt just like the wafers we eat (I had to resist trying them myself), were sold at kiosks along the park at 150yen for a stack. Our hotel kindly prepared a little bag of biscuits and bottle of water for our little adventure. 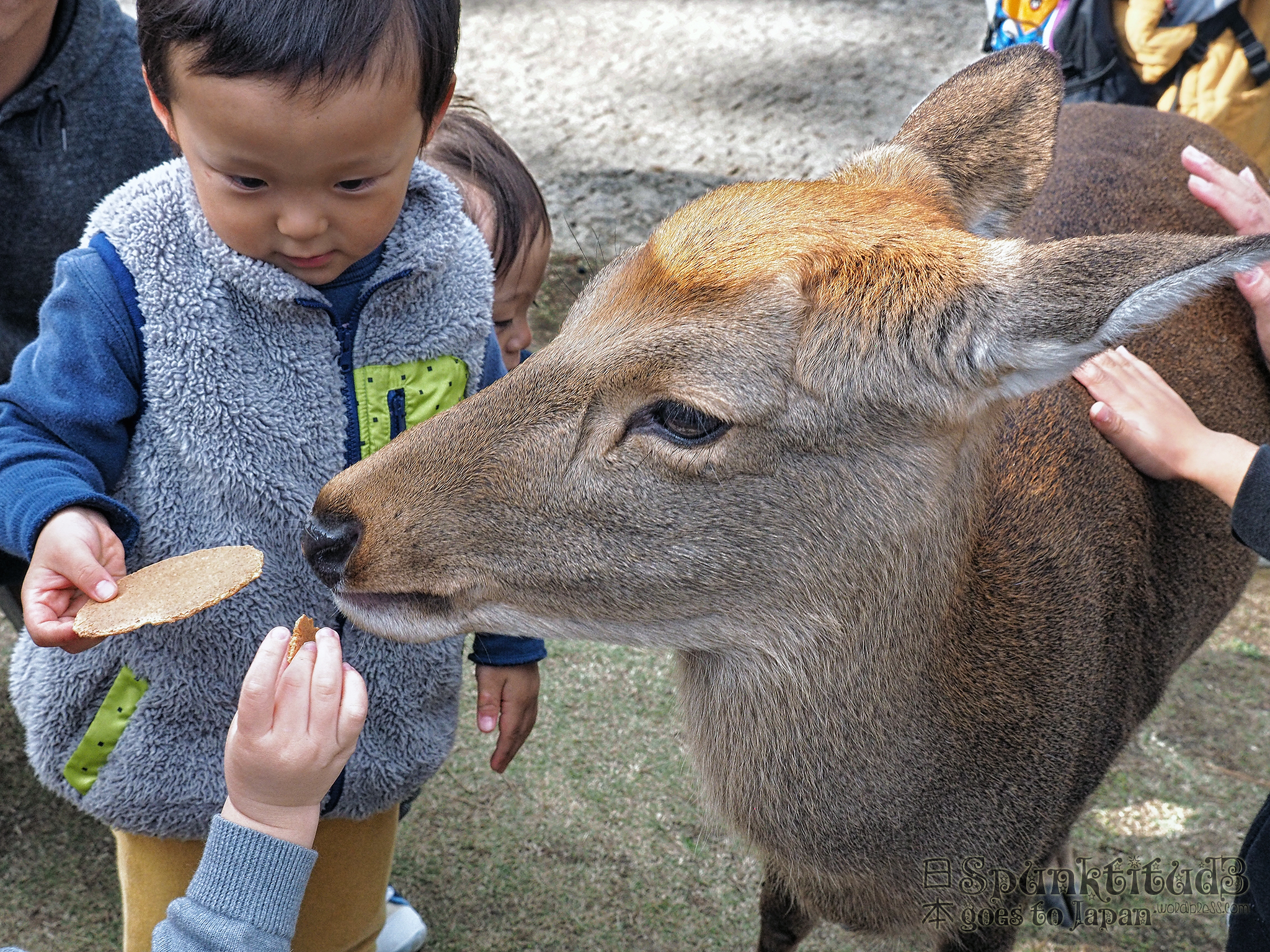 While the deers are generally tame, just be cautious as they can get aggressive. Afterall, they are wild animals.

The deers are pretty intelligent, and have learnt to bow to ask for food. 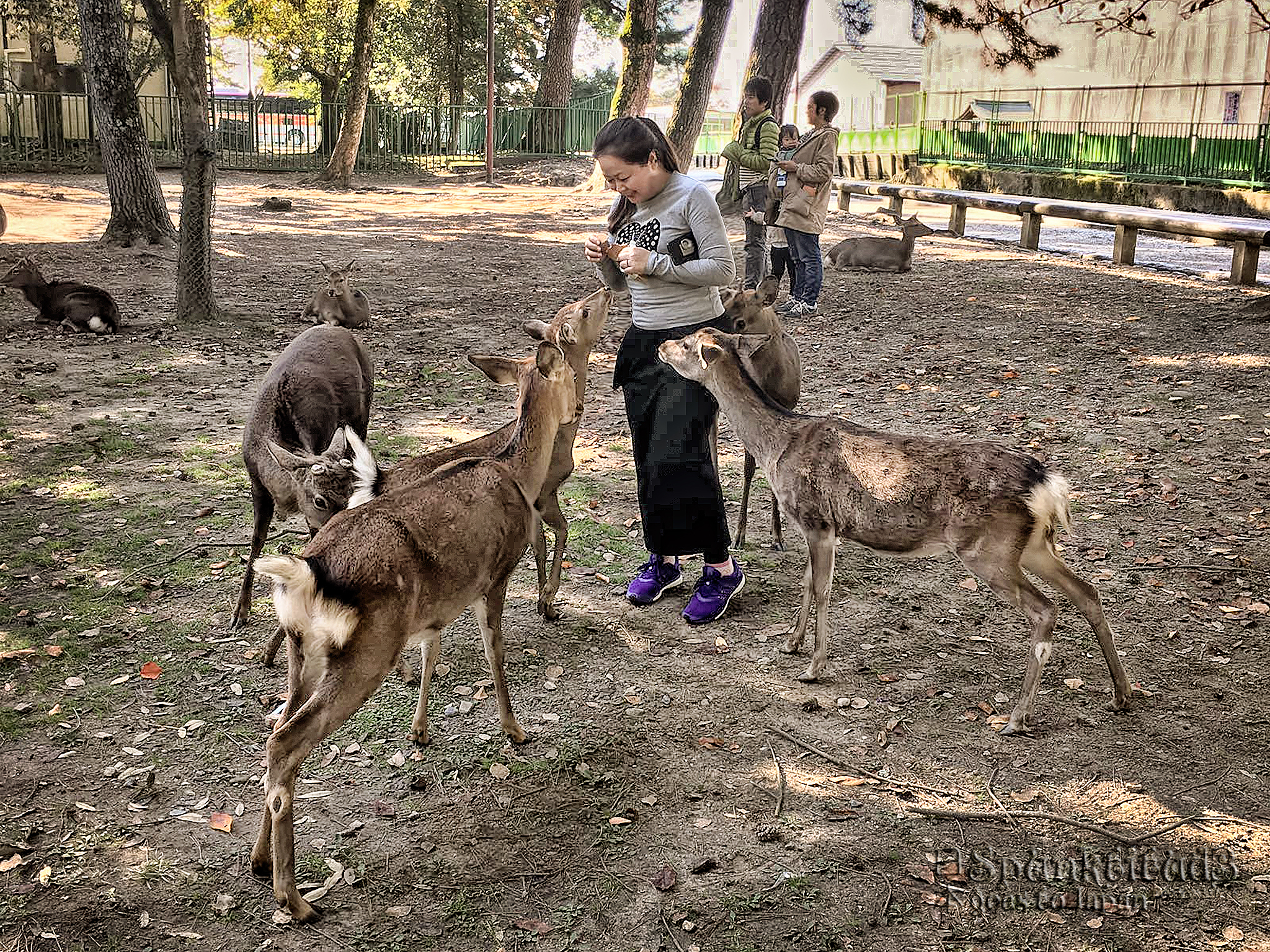 Once the deers see the biscuits, be prepared to be surrounded and nudged around like a superstar. They butt you with their heads when you don’t feed them quickly enough, and the one behind lightly bit my arse to get my attention. 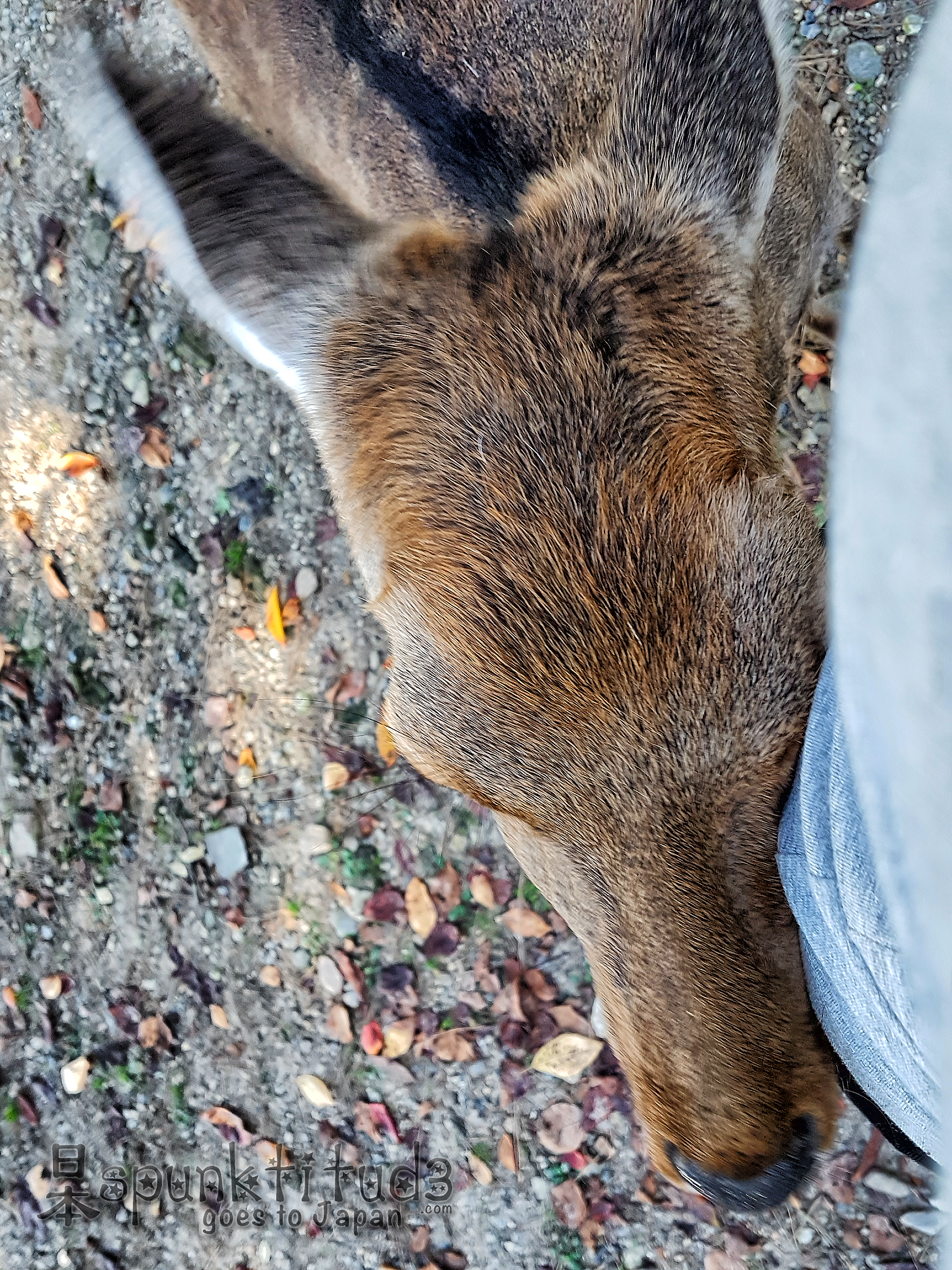 See the affection they show just to get their treats. 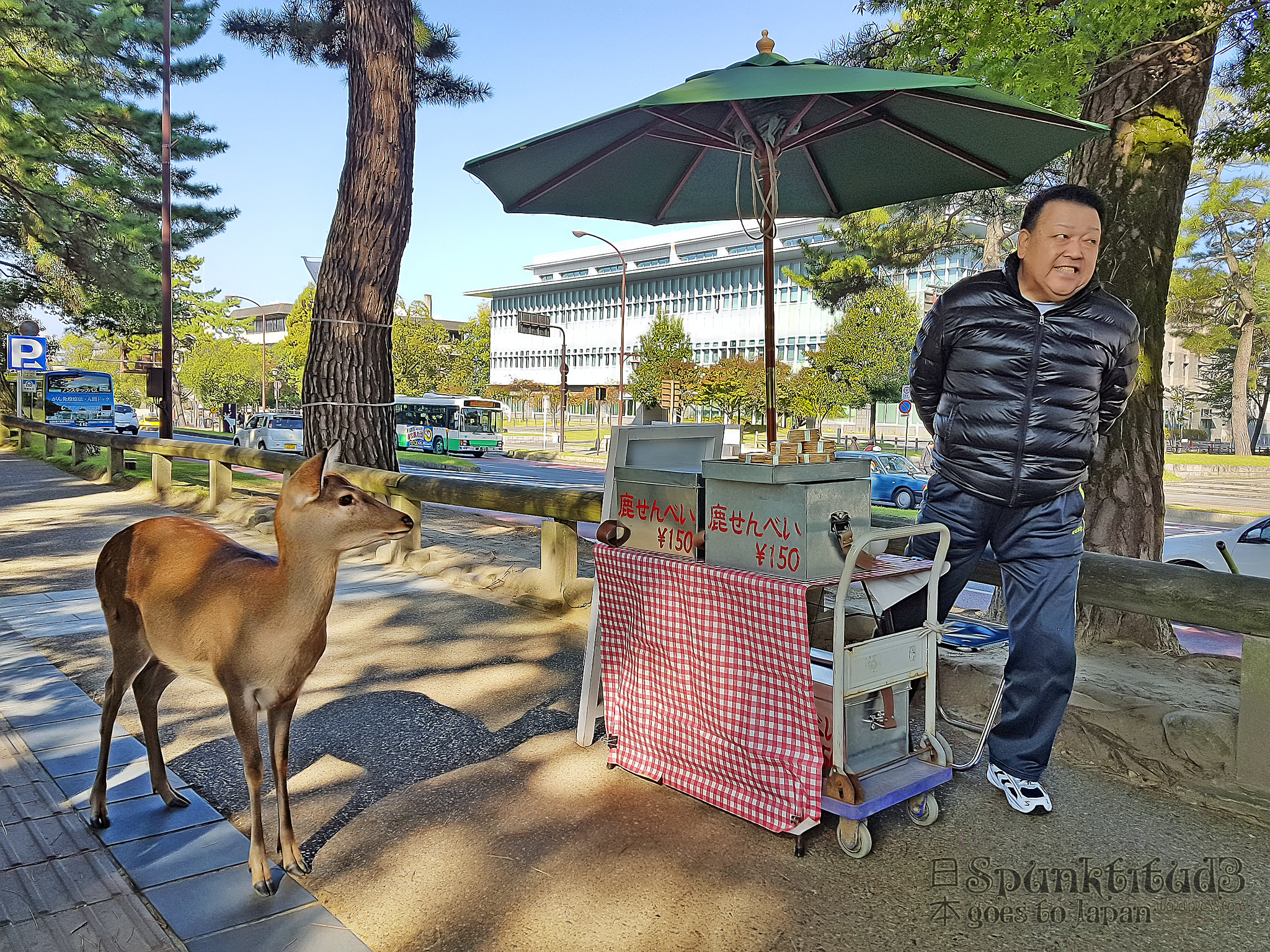 This clever one went for the shortcut and simply stood in front of the deer biscuit stall :D 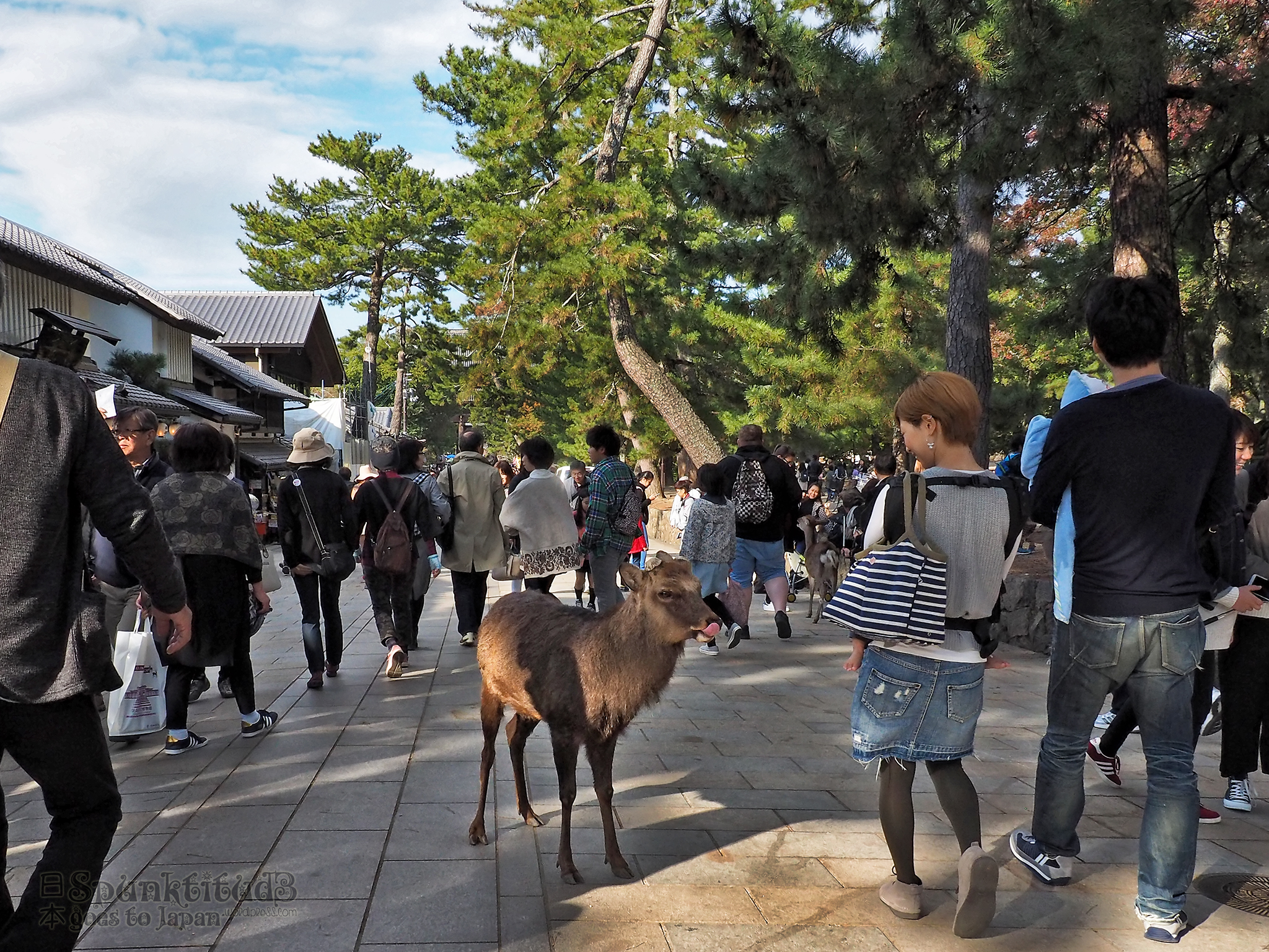 Greedy little fellas. They are also very practical – they leave you as soon as you run out of biscuits to feed them. 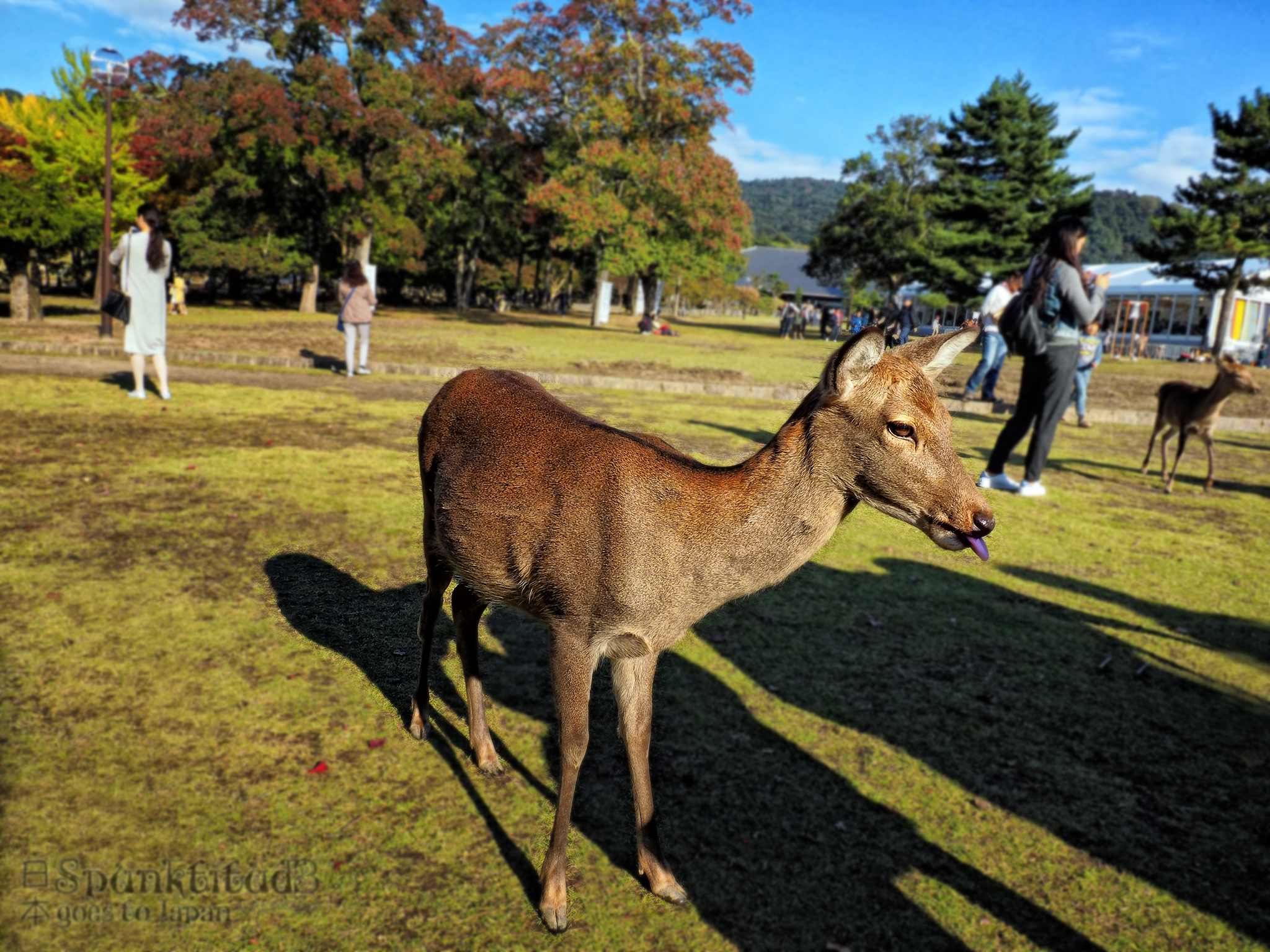 “No biscuits for me? Bleahhhhh.” 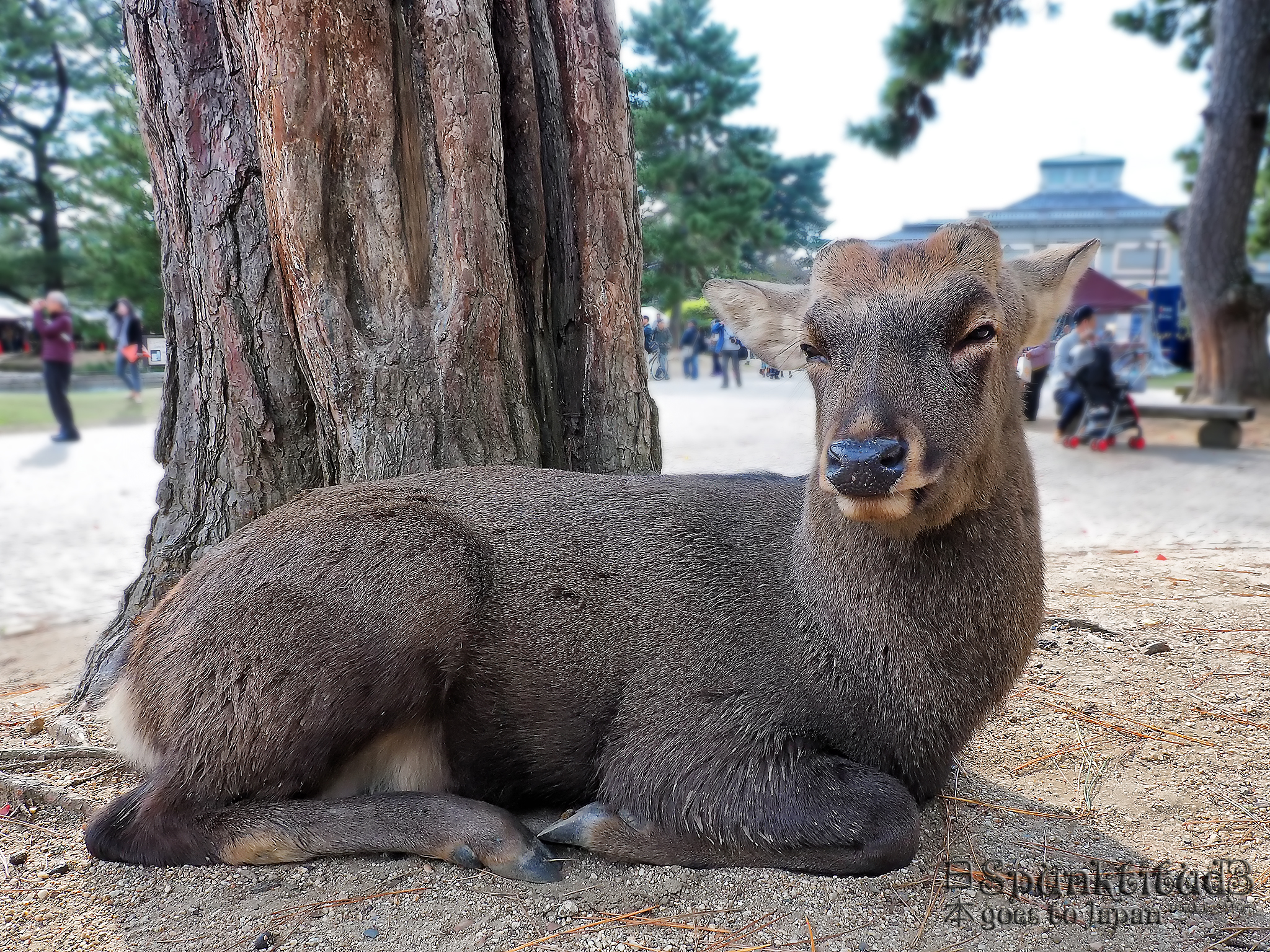 Once they are well-fed, they pick a spot and start snoozing. Nothing you do will move them, not even putting a biscuit right under their noses. So come early in the day when they are still hungry. 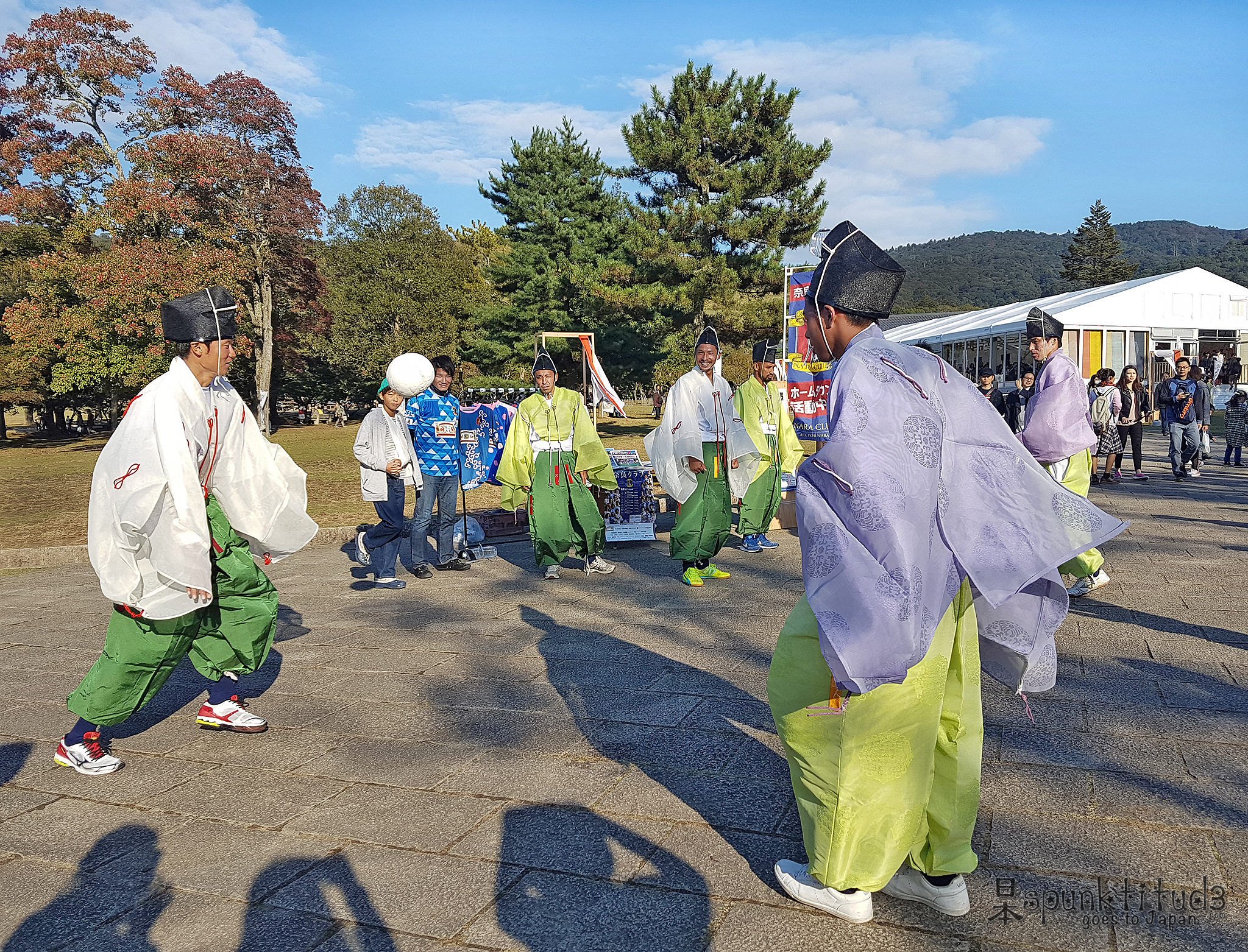 We caught some hotties in traditional costumes playing ball at the park too. There was a festival nearby as well, and I thoroughly enjoyed hanging out with the locals, both human and animal. 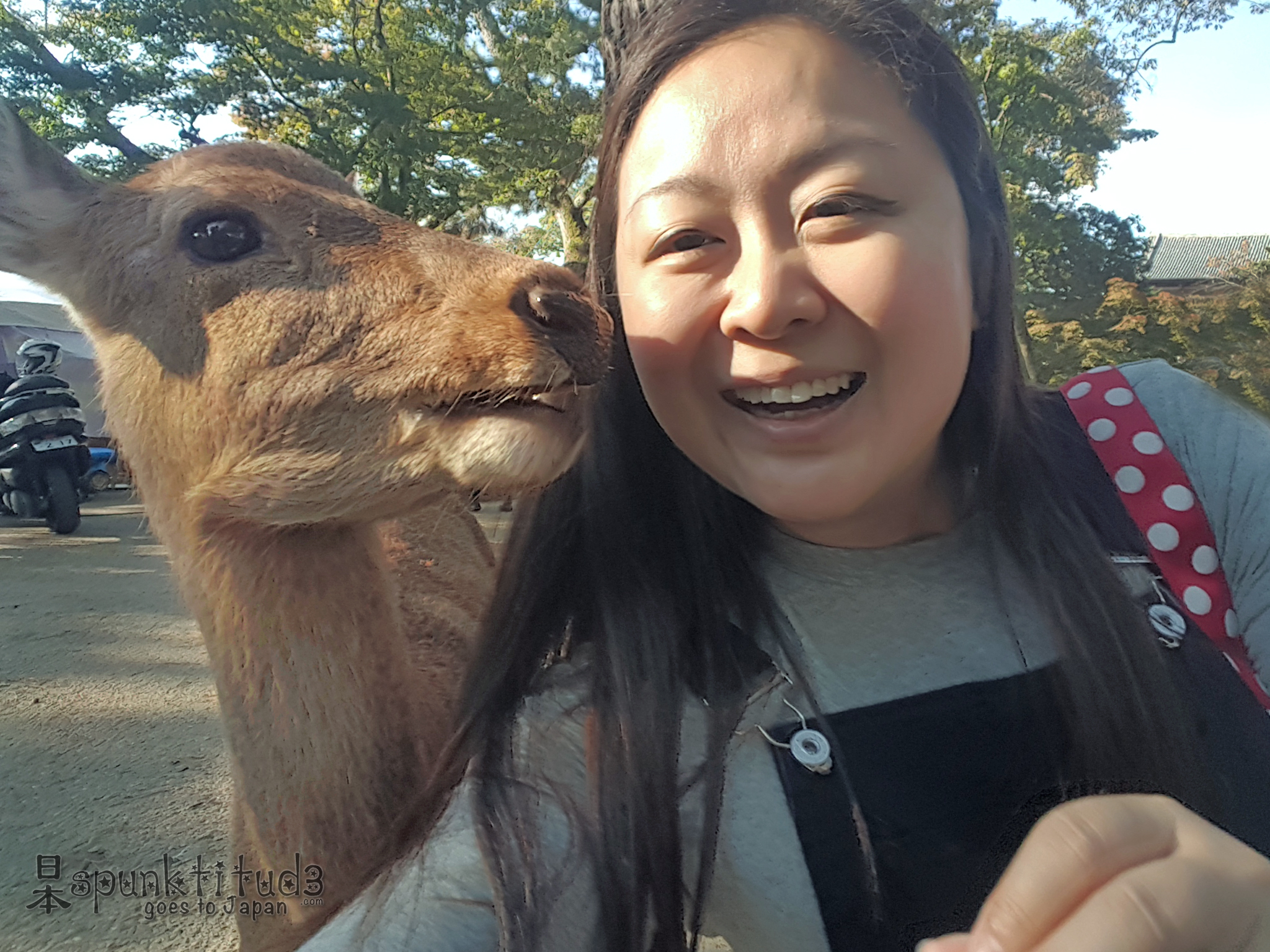 One for the wefie album ;) It was quite an experience getting upclose with the deers after hearing so much about them. It was totally worth the trip, not to mention there’s so much cultural sights to visit in Nara. I will be back to visit my furry friends…with thicker pants.

Read more about my travels in Japan 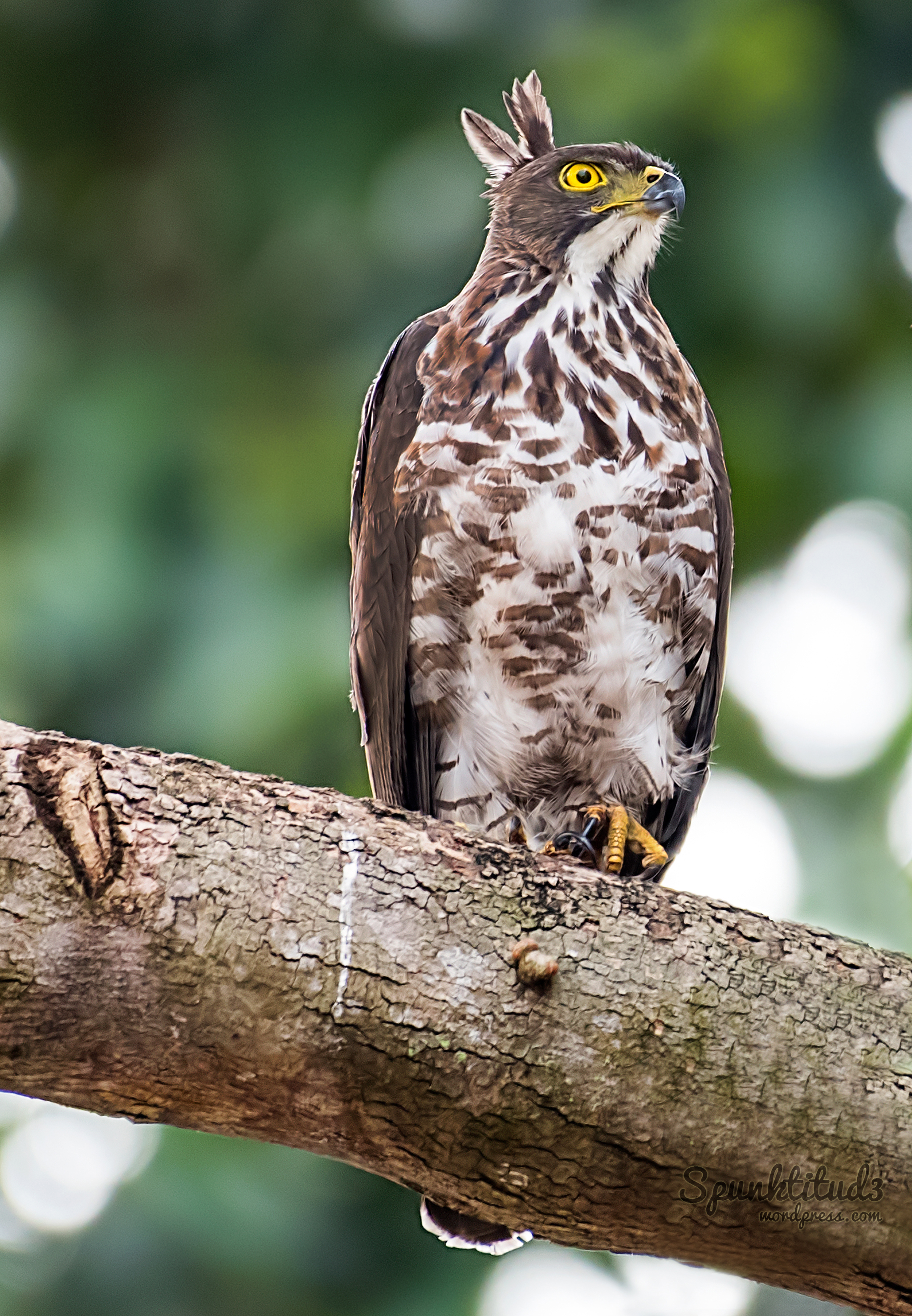 The Crested Goshawk (Accipiter trivirgatus) is a bird of prey from tropical Asia, and the only resident and rare accipiter in Singapore.

There are 11 subspecies of goshawks, with the one in Singapore being indicus whch has the widest range from north India east to China and south to Singapore. Know as Helang-Sewah Berjambul in Malay or 凤头鹰 in Chinese, this bird of prey is found in tropical and warm subtropical areas. The Crested Goshawk can be identified by its short crest, yellow eye-rings, 6 fingers, short wings when perched, thick tail bands and thick tarsi. 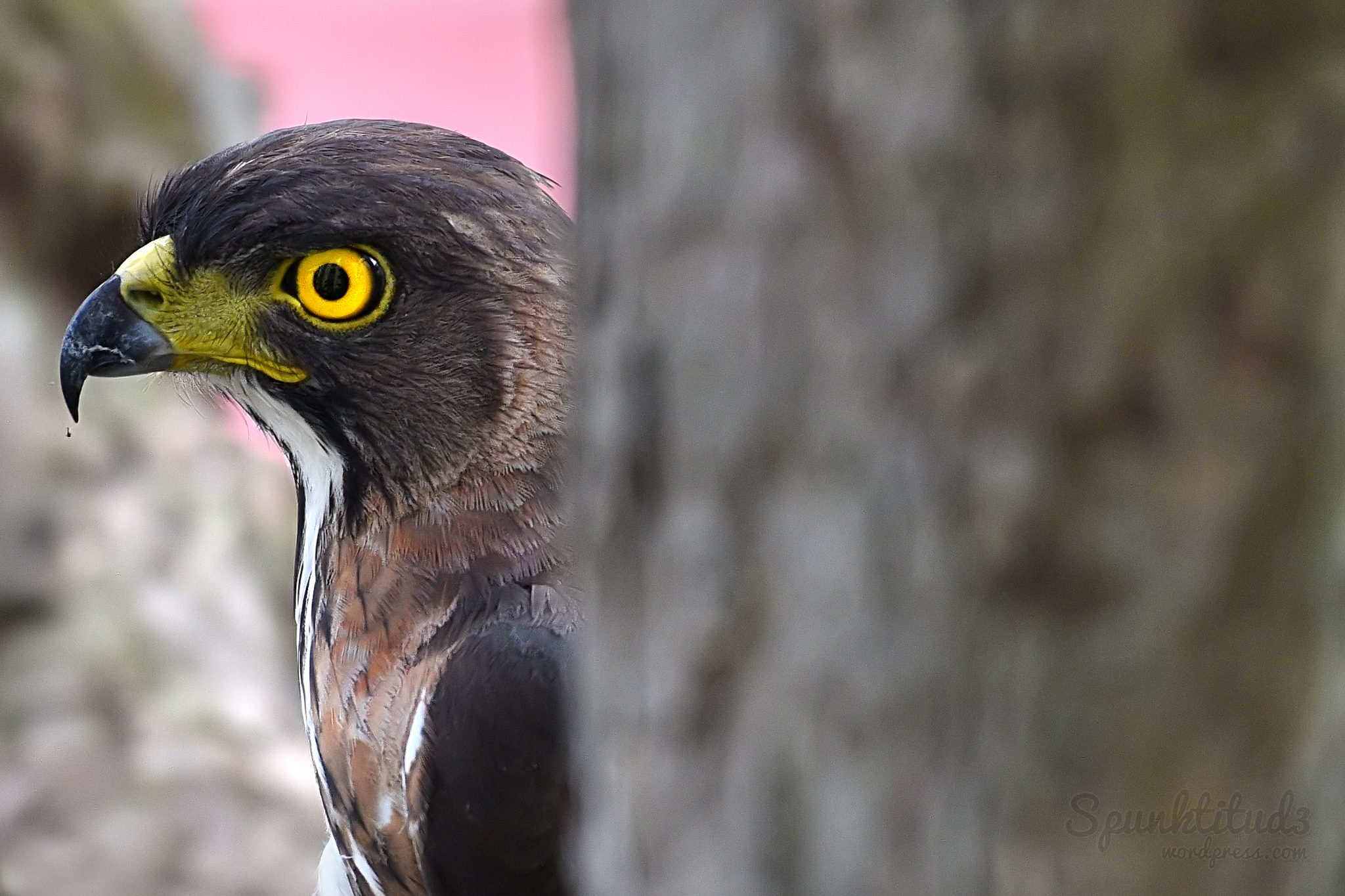 This bird is a female who recently found a liking for a particular tree branch just outside my friend’s flat. The crested goshawk inhabits deciduous and evergreen forests in humid lowlands and foothills, and have been sighted in nature reserves and parks in Singapore, so I guess the loss of their habitat has gradually forced them to come to housing estates. This particular female bird was teaching its baby goshawk, which came earlier in the morning, how to hunt.

The crested goshawk preys on large insects, small birds, small mammals (such as fruit bats, rats) and reptiles. It surprises its prey by diving from its perch. We have seen it coming back with rats or blood on its beak. 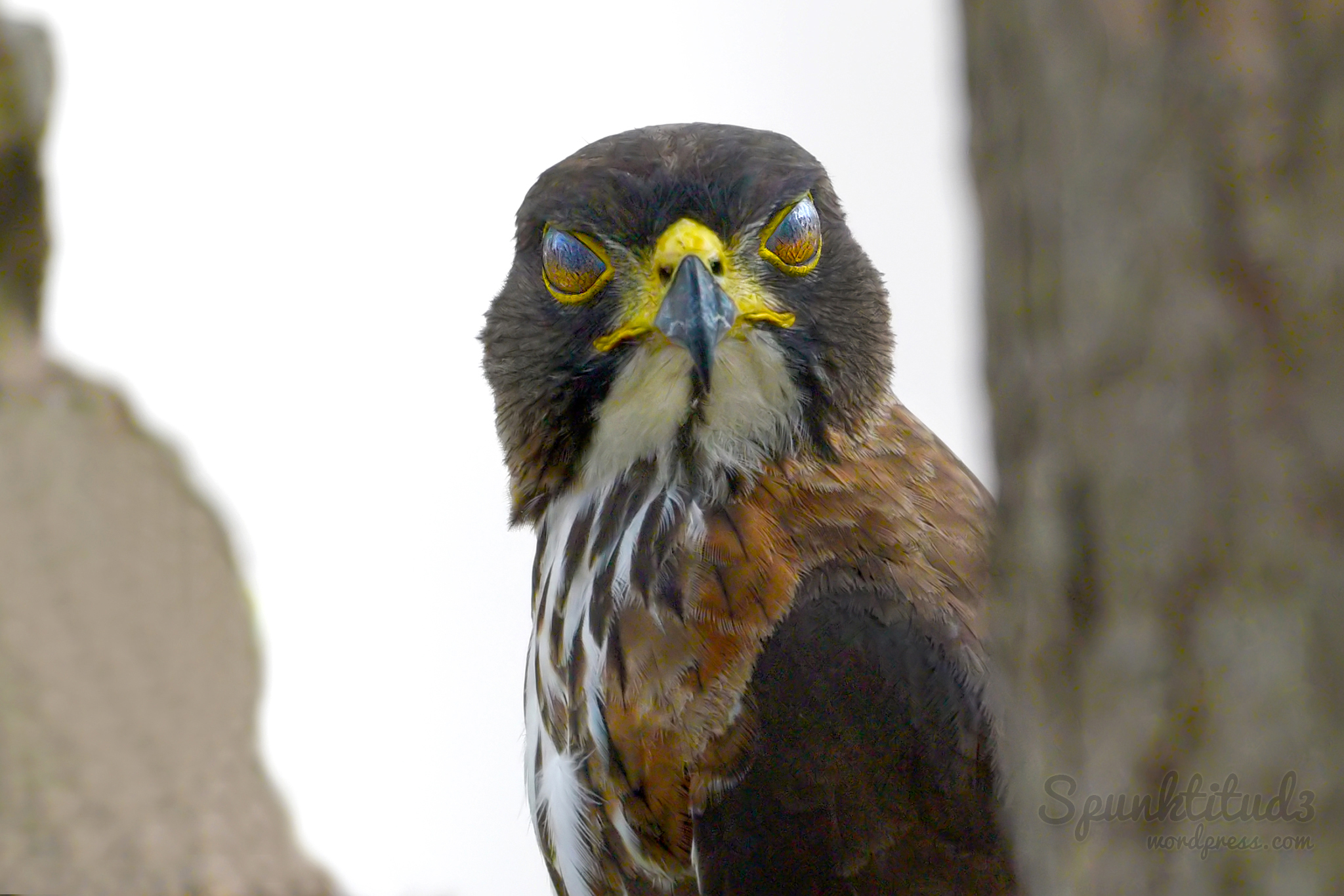 And she blinked at me. Somehow she reminds me of a Marvel Hero like this. Well, as long as I don’t look like food to her I am fine with the attention. The crested goshawk is small compared to most other raptors, measuring 30 to 45 cm in length and weighing about 350 grams. The female goshawk is slightly larger weighing around 550 grams. The wingspan is 50 to 80 cm. The male has a dark brown crown with a grey head and sides, black moustachial and throat stripes. The female goshawk has brown plumage. Its call is a high-pitched tone. 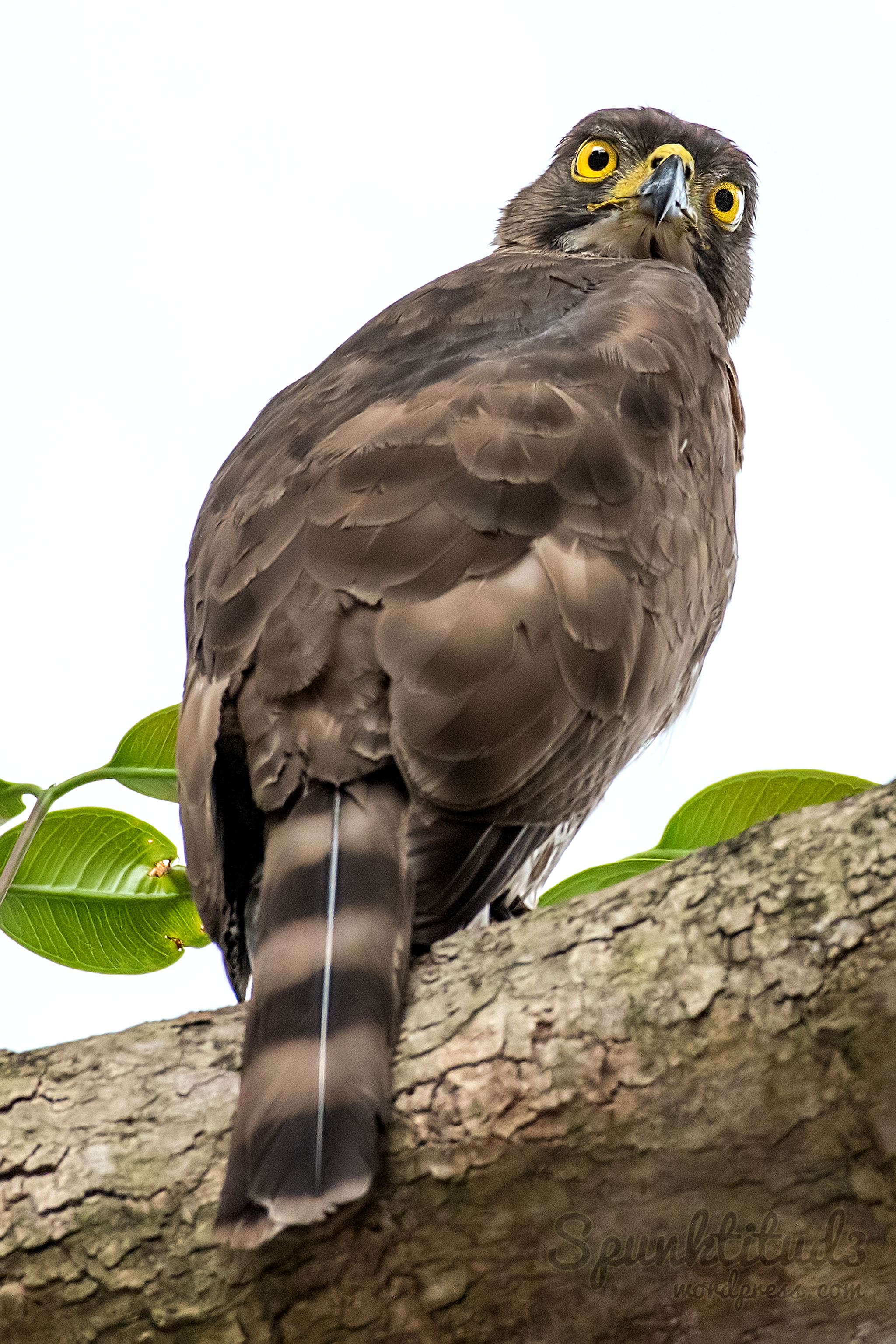 Glad I managed to see this pretty raptor (I have decided to name her Bunny – inspired by the first photo). Hope she and her baby will continue to co-exist well with urban Singapore. 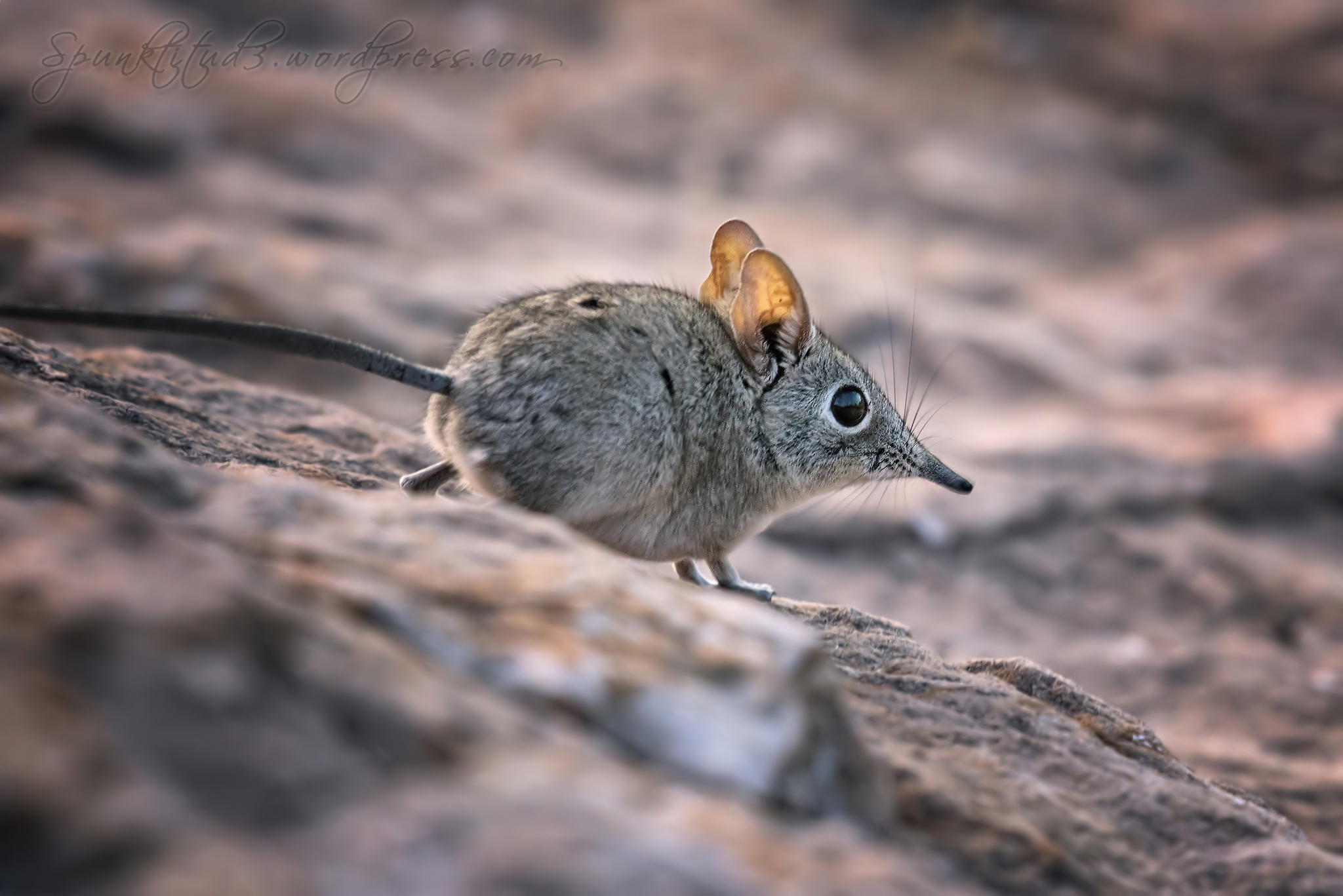 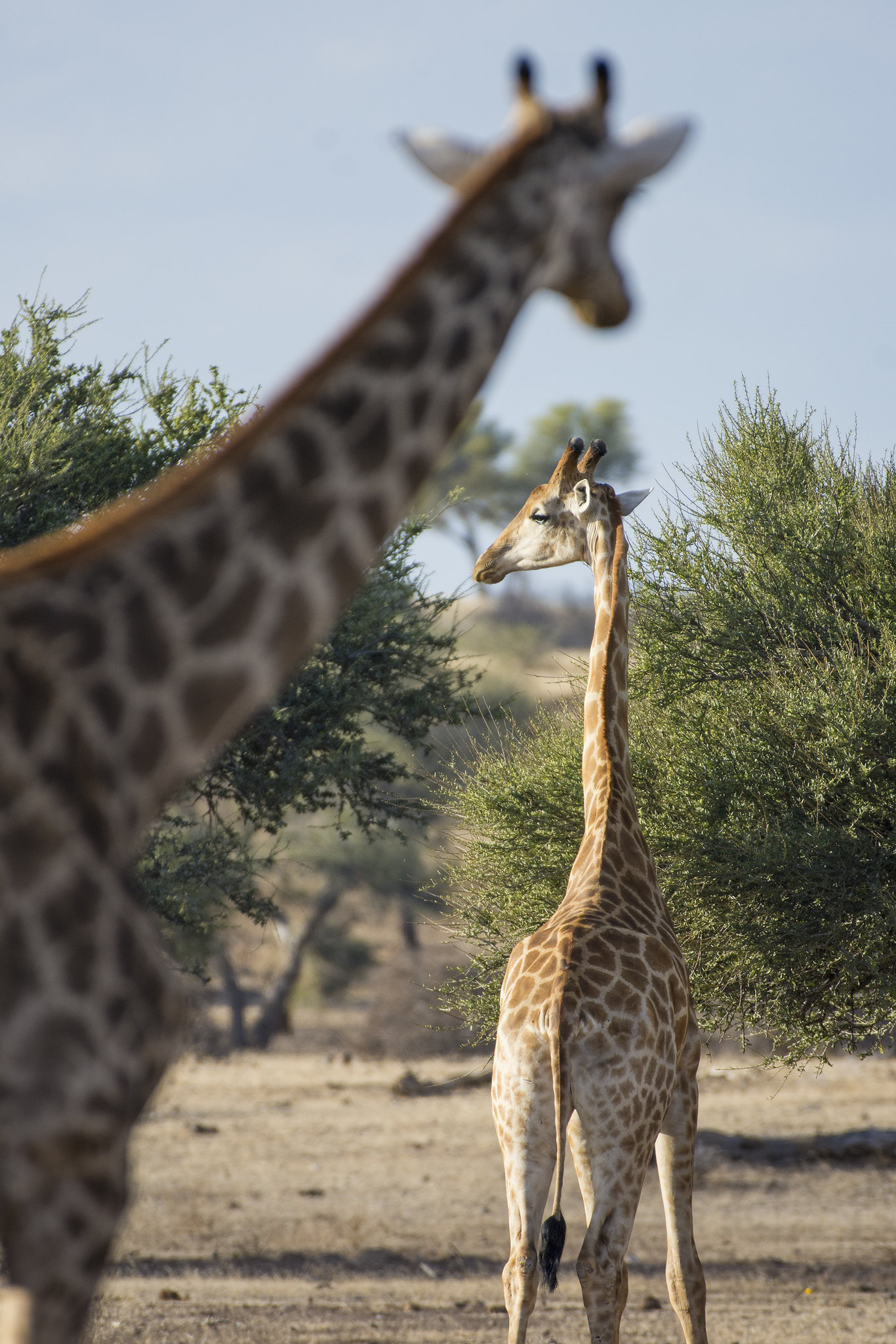 An adult giraffe keeps an eye on a young one as it feeds on the leaves of an acacia tree. A giraffe’s extra-thick saliva gets its antiseptic properties from the acacia leaves that they eat. Its tongue also has a thick, tough layer that protects it from being cut by the super sharp thorns (from personal experience, ouch) of the acacia tree, while its antiseptic saliva thoroughly coats the thorns so they come out of the digestive system pretty intact. The saliva helps it to heal quickly too should it be cut by the thorns or anything else. So if you have a cut, you can try getting a giraffe to lick on your wound – if you can ever get close enough to one in the wild :) 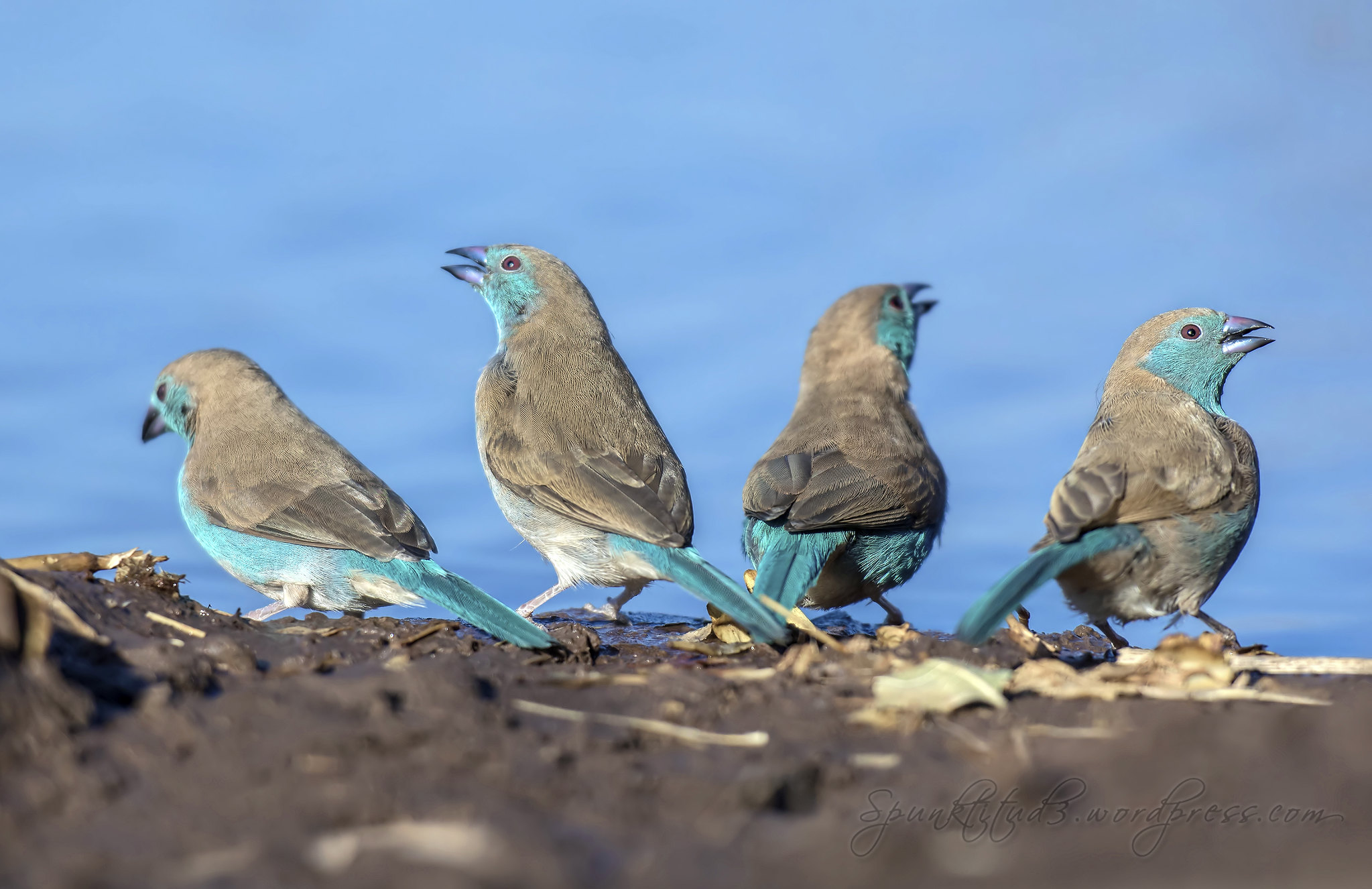 The blue waxbill (Uraeginthus angolensis), also called blue-breasted cordon-bleu, is a small estrildid finch (about 12.5cm) found in open grassland, savanna, bush or wooded areas and cultivated lands of South Africa. We saw these cuties in Botswana’s Mashatu Game Reserve. It needs to drink regularly, hence is often found in areas with a constant supply of surface water. Its diet consists of small seed and insects (for protein especially during breeding period). Interested males sing and dance when courting a female, with a blade of grass in his beak (it must have Spanish blood, reminds me of flamenco!). Blue waxbills can live for a decade or more.

Listen to the chirpings of a blue waxbill.