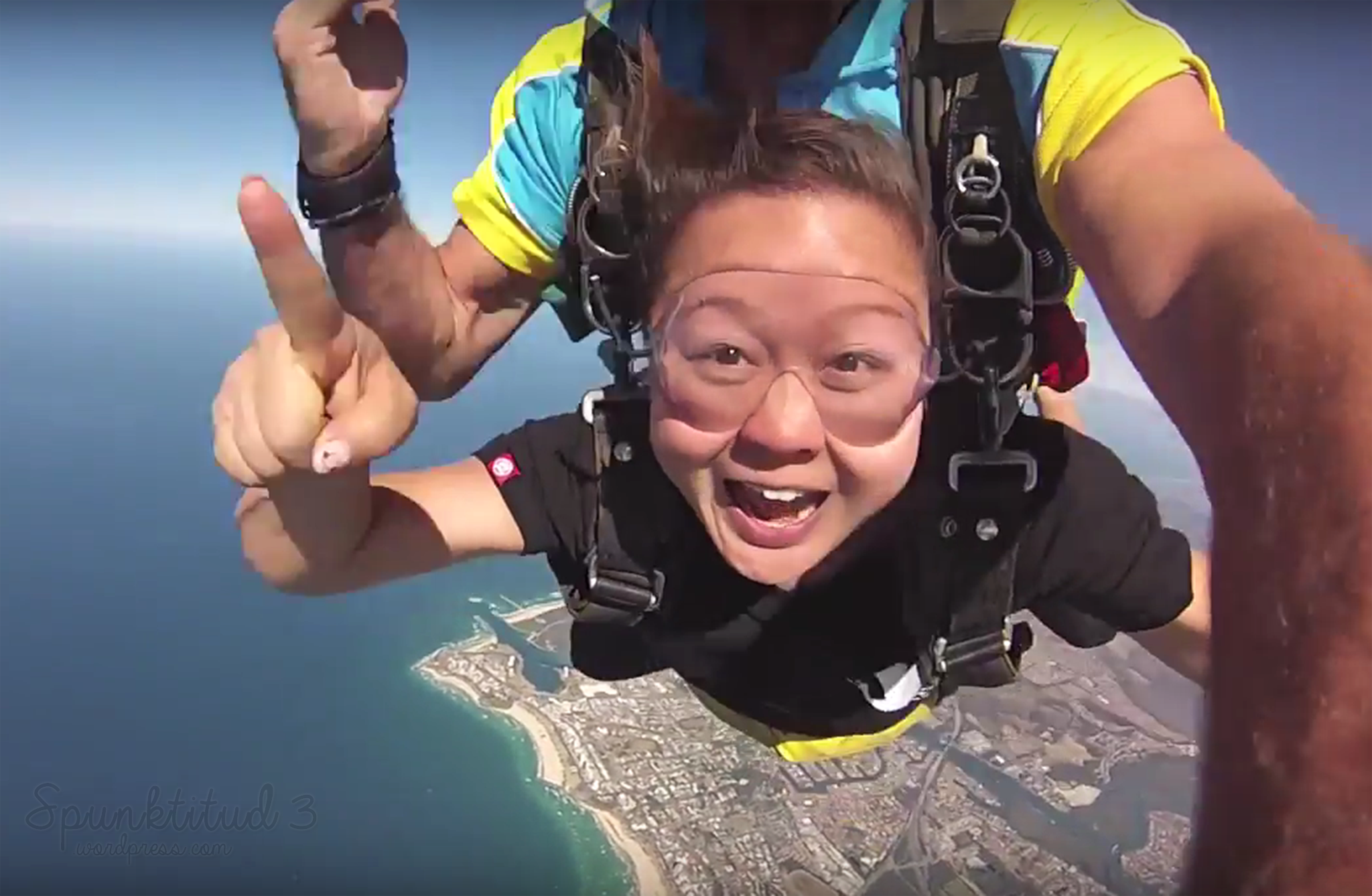 I don’t even dare to take the rides at theme parks, so I don’t know how I found the courage for this impulse purchase – a skydive! My travel partner has been wanting to skydive for a long time, but everytime he was booked to do one, it rained. So he was understandly excited when he saw skydiving being one of the suggested activities in hotel guide at Halcyon House. Fate has it that Mauro, the hotel’s charismatic General Manager, was just as enthusiastic about skydiving, and promptly booked us for a skydive with Gold Coast Skydive. 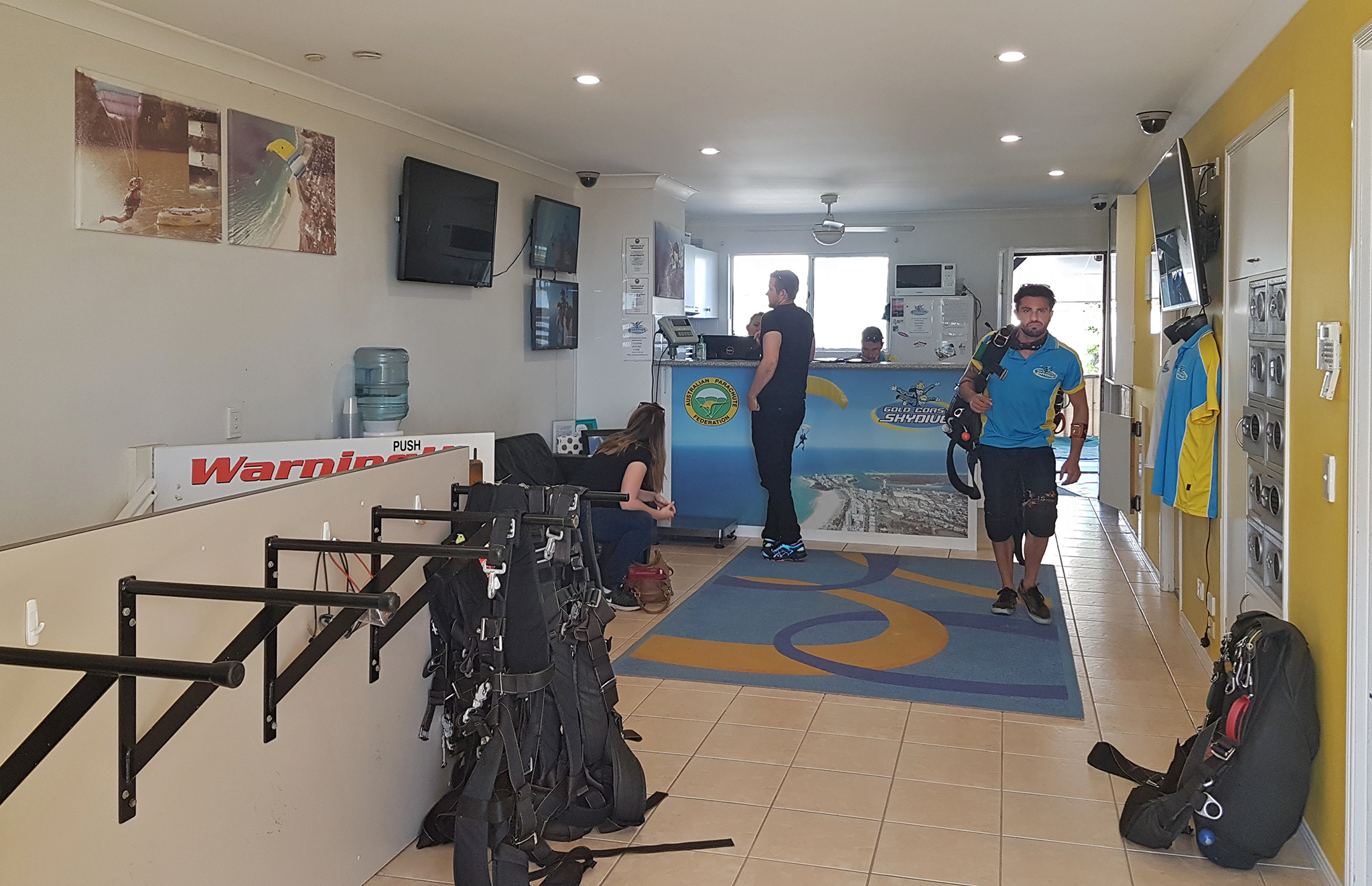 The scariest moment of my life came when we started to jump one by one. There was no turning back. 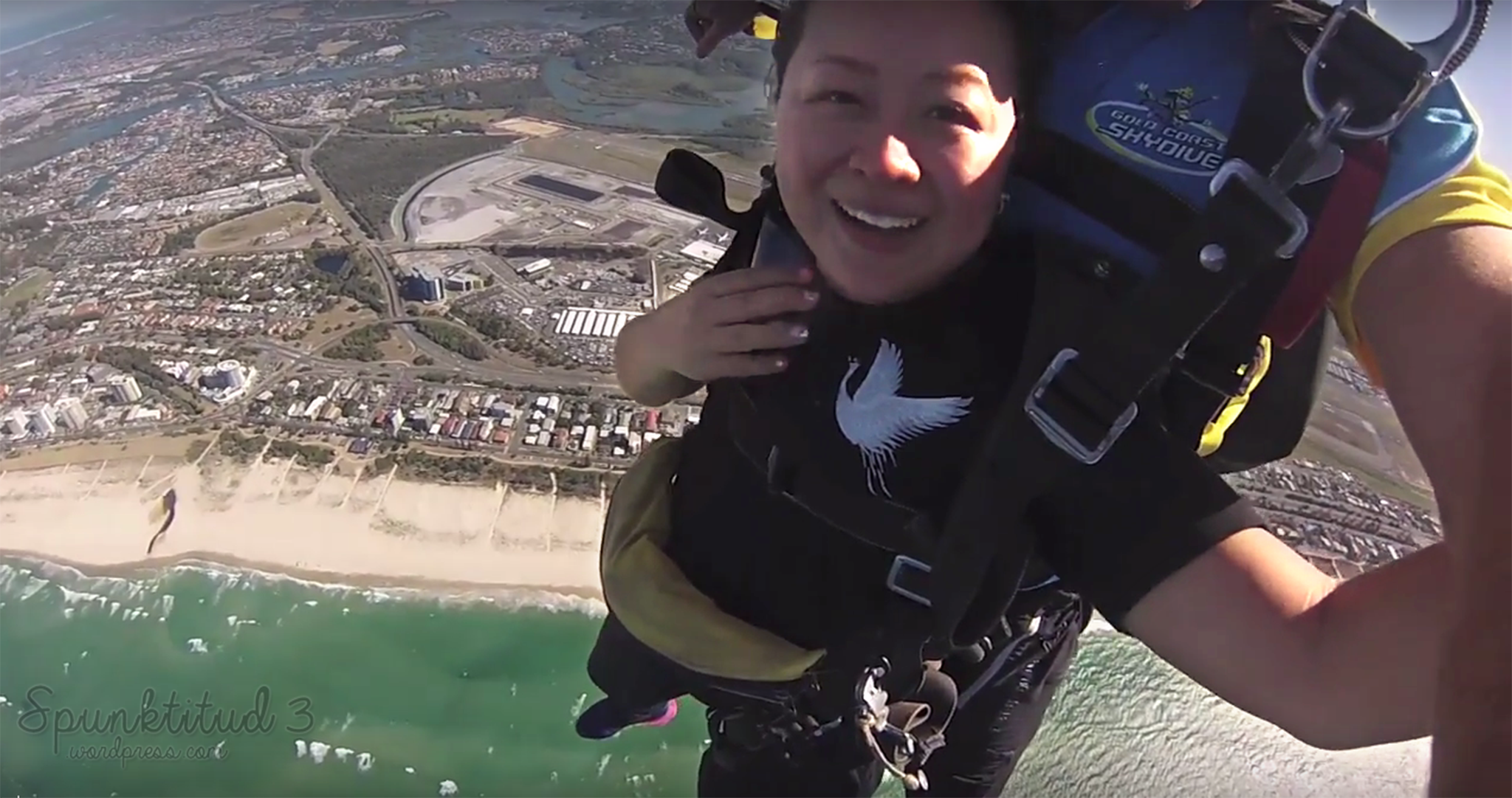 I SURVIVED! Gosh, I am so proud of myself LOL. 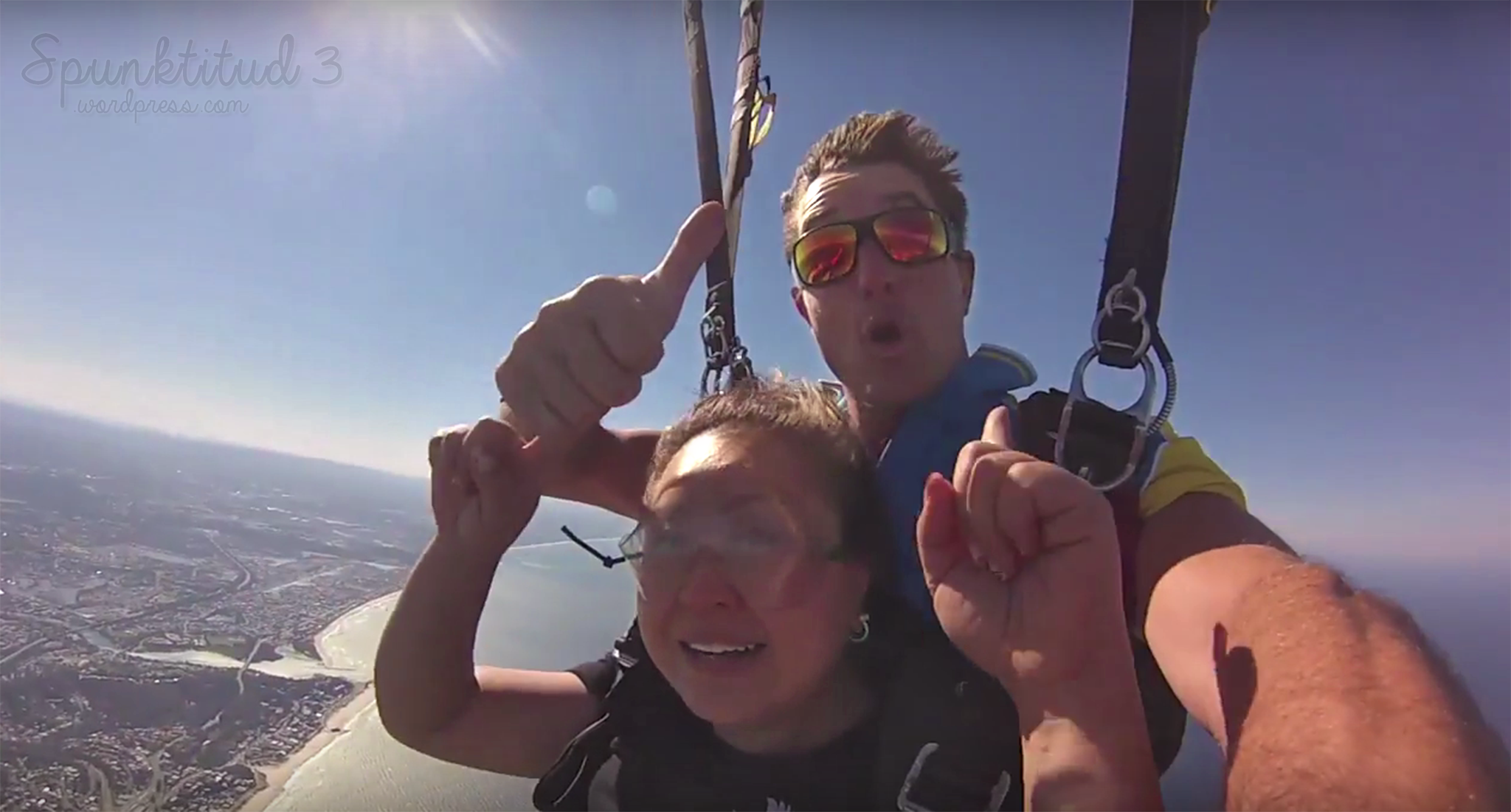 The freefall was quite cool, and I felt like Superman. Tom was awesome and uber experienced, and made it more fun. 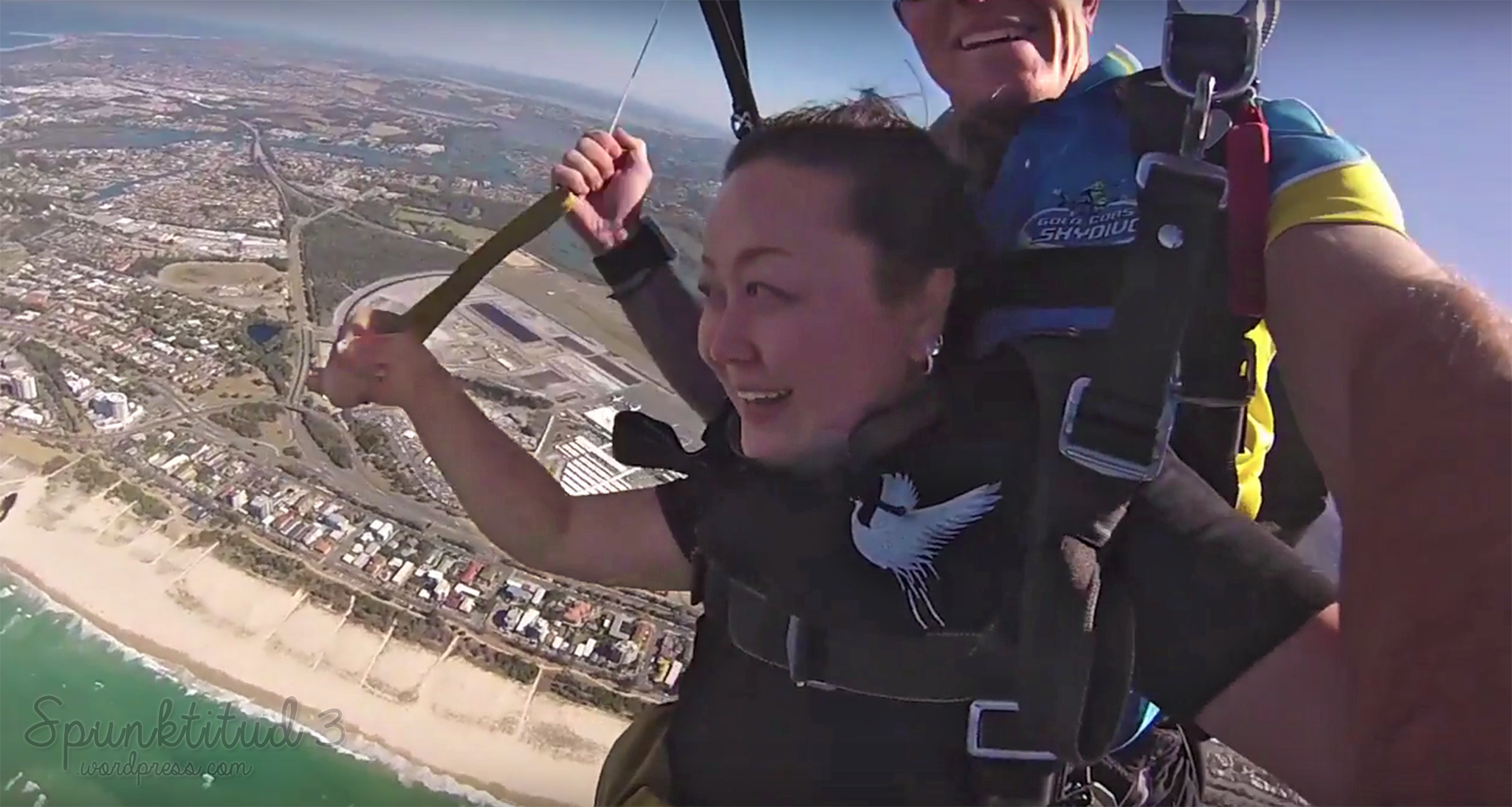 Taking a moment to enjoy the scenery from above. I got to control the parachute for a while, though I got a little dizzy from the spinning when you pulled only on one side. 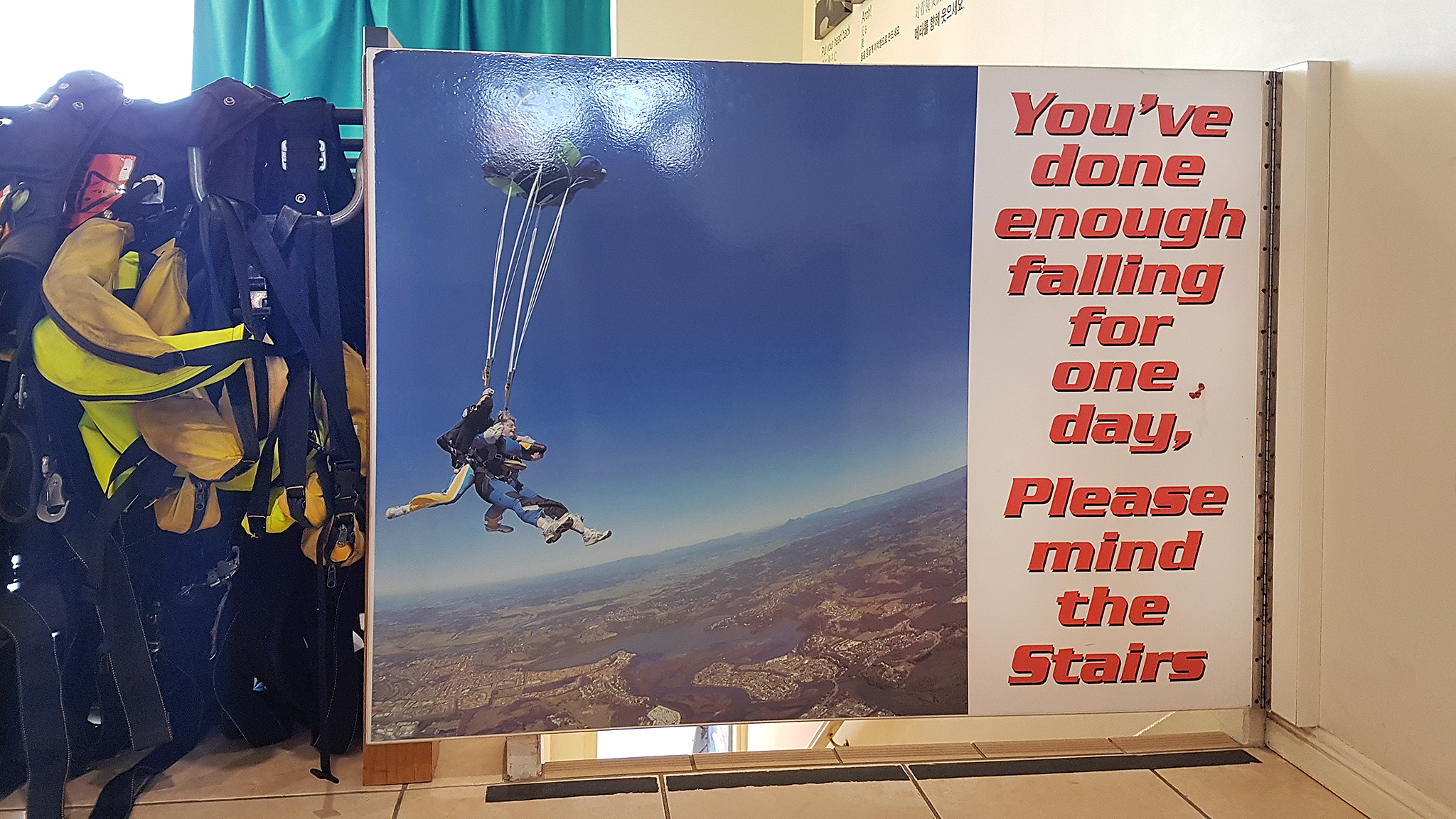 My first thought when I landed on the beach: “I’m hungry.” Good, I am back to normal LOL. The parting humor at the skydive centre left a smile on my face. No doubt this would be an experience I will remember for the rest of my life. I am SO happy I checked this off my bucket list! :) 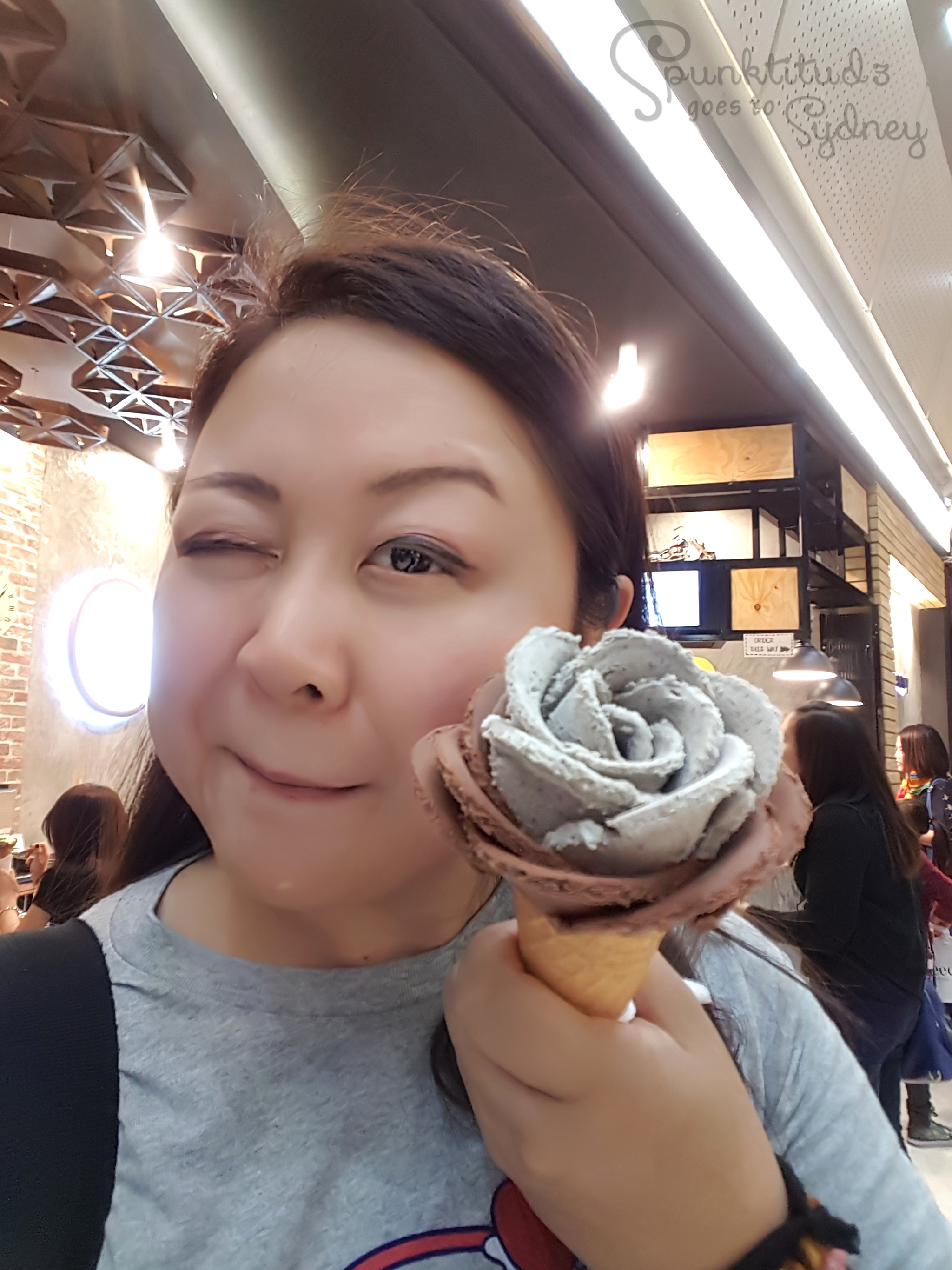 This is easily the most Instagrammable gelato I have ever seen – it caught my attention when I chanced upon it on my Instagram feed, and I made it a point to visit i-Creamy on my next trip to Sydney. 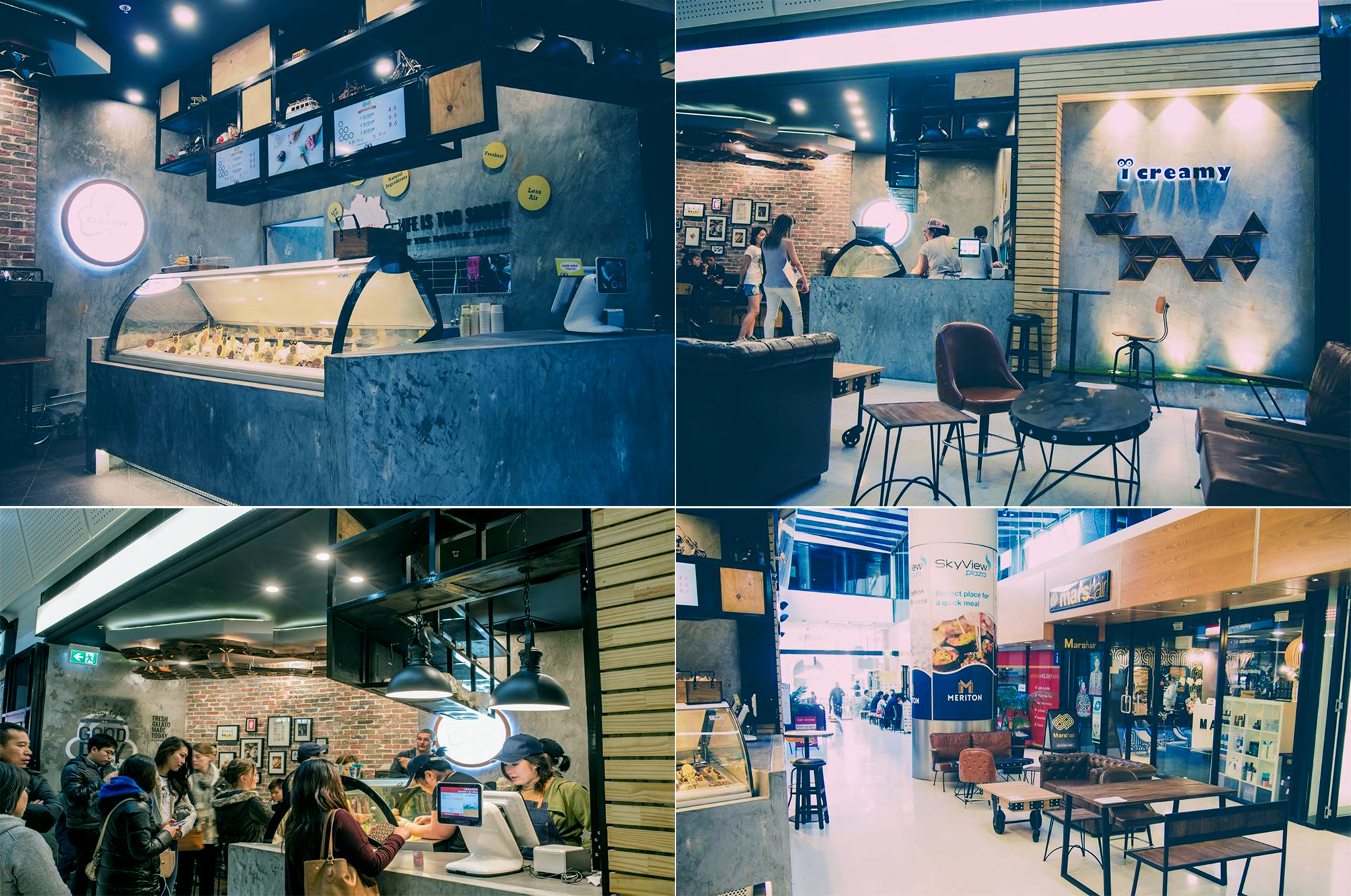 i-Creamy is located within Sydney’s CBD at Skyview Plaza (street level) near Chinatown. There is some seating space within the shop and in the public area.
Image source: i-Creamy Facebook page 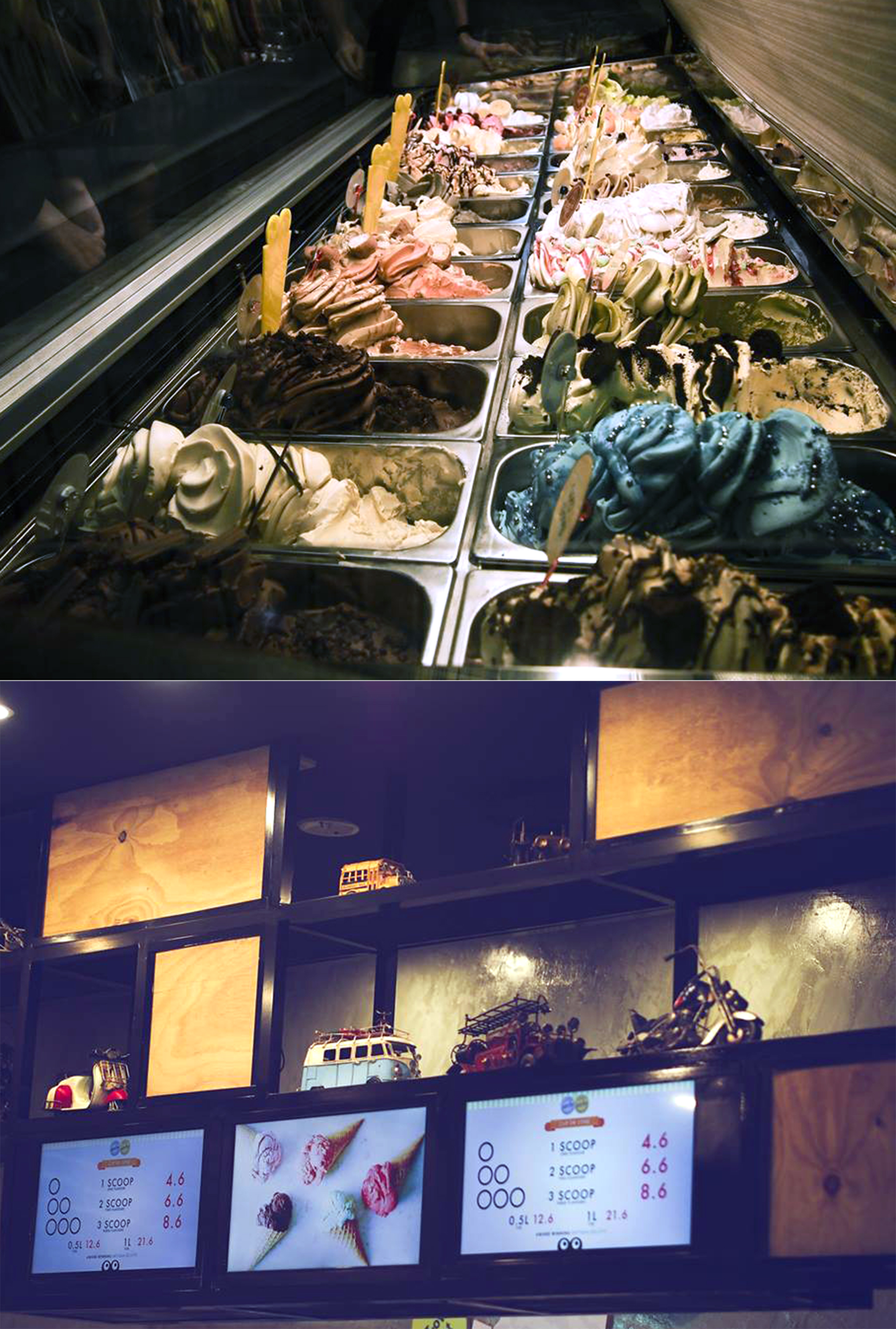 The shop is opened by Thai Ben Chitmitrechareon, who studied at Carpigiani Gelato University where he was taught by Gelato Messina master Nick Palumbo. So no wonder all the staff were Thai. And guess the creative Thais would be more adept at crafting roses out of gelato.

There are at least 24 flavours of gelato available out of 96(!) rotating flavours, all made daily in-store. Not every flavour can be used though – look out for those indicated with a green leaf signage. You can choose up to 3 flavours for your rose gelato – do make sure that the flavours complement cos’ I don’t think a durian flavour would taste very nice when mixed with say, strawberry flavour. I went for the chocolate and black sesame flavours.

It was fun watching the Thai staff deftly shaping the gelato with their spatulas into floral treats…and I silently contemplated buying a tub of ice cream at home to play with at home. 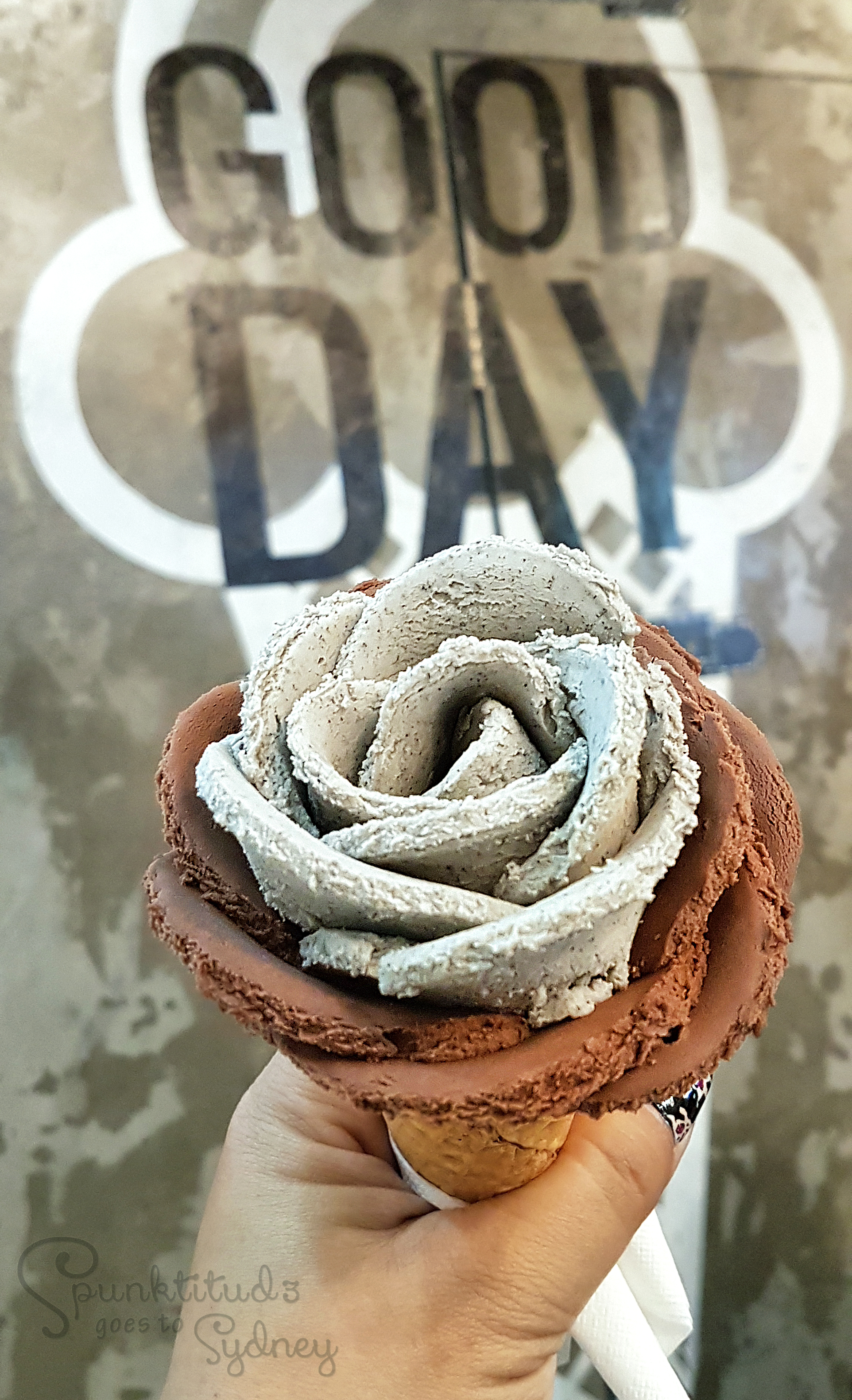 Voila – I love flowers which look enough to eat! Taste-wise, the texture was thicker than usual probably because you need the hardness to shape the gelato. The taste was also lighter than the usual Italian gelato flavours which I favour at Gelato Messina. Go during off-peak hours as you may need to wait about 10-20mins for your gelato to be shaped depending on the crowd. Have fun creating your roses! 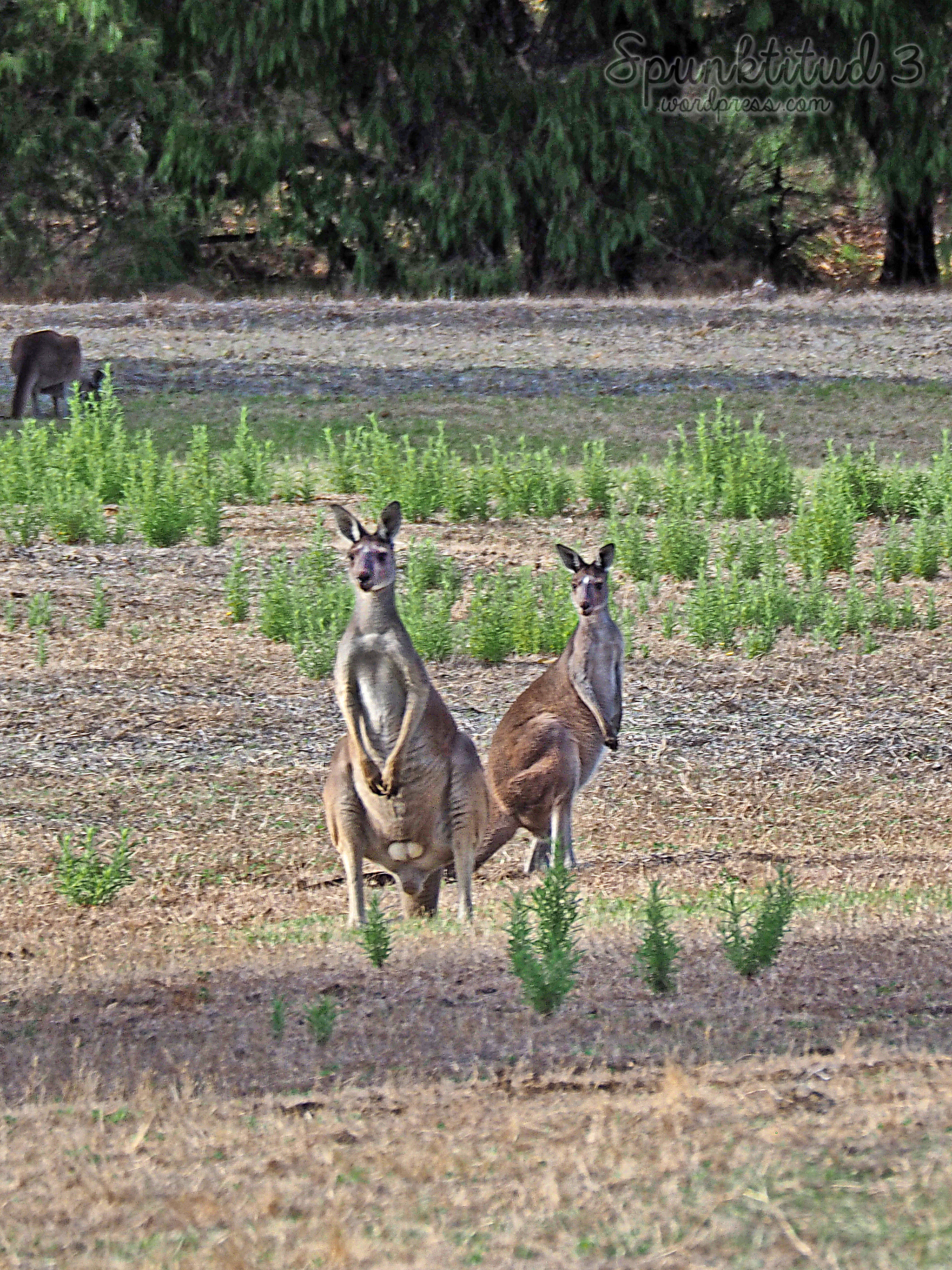 Caught this pair of wild kangaroos at Gunyulgup Drive in Margaret River, Perth. Apparently, everyday at around 5am and 5pm you can see HUNDREDS of wild kangaroos at the empty green space near Little Fish Restaurant. Apparently, the roos hang out at rural golf courses around the area as well (Vines Golf Course, Margaret River Golf Club, Melville Glades Golf Club, Yanchep Golf Course, etc). Another ‘interesting’ place to see them would be Pinnaroo Valley Memorial Park (yes a cemetery). It’s definitely a must-see when you visit Margaret River :) Be careful of them if you are driving, as they are well-know to be ‘road hogs’ or may just suddenly jump out to cross the road.

Other places that you can try are Yelverton Brooks, Whiteman Park and Cottonwood Reserve (off Dianella Drive and Gay Street by Chanel 9 and Chanel 7 TV studios). Do you know of more kangaroo sighting places in Perth or Australia? 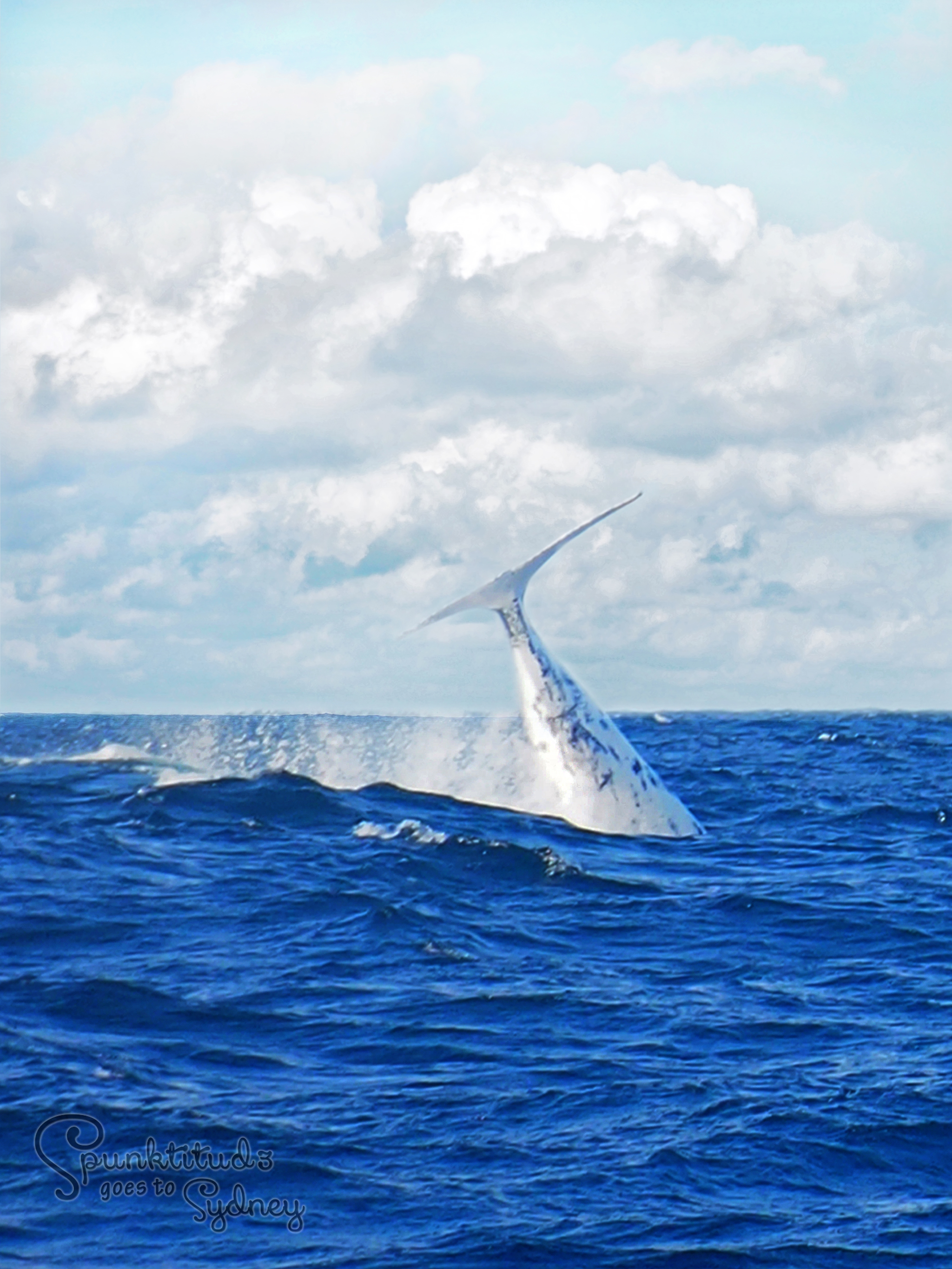 During June to November, the whale watching season in Australia, whales such as the humpback and orca migrate from the cold waters of the Antarctica up to the warm temperate waters of Australia to give birth. About 20,000 whales pass by the waters of Australia during this period, and I took the opportunity to catch a glimpse of this magnificent creature up close during my trip to Sydney. 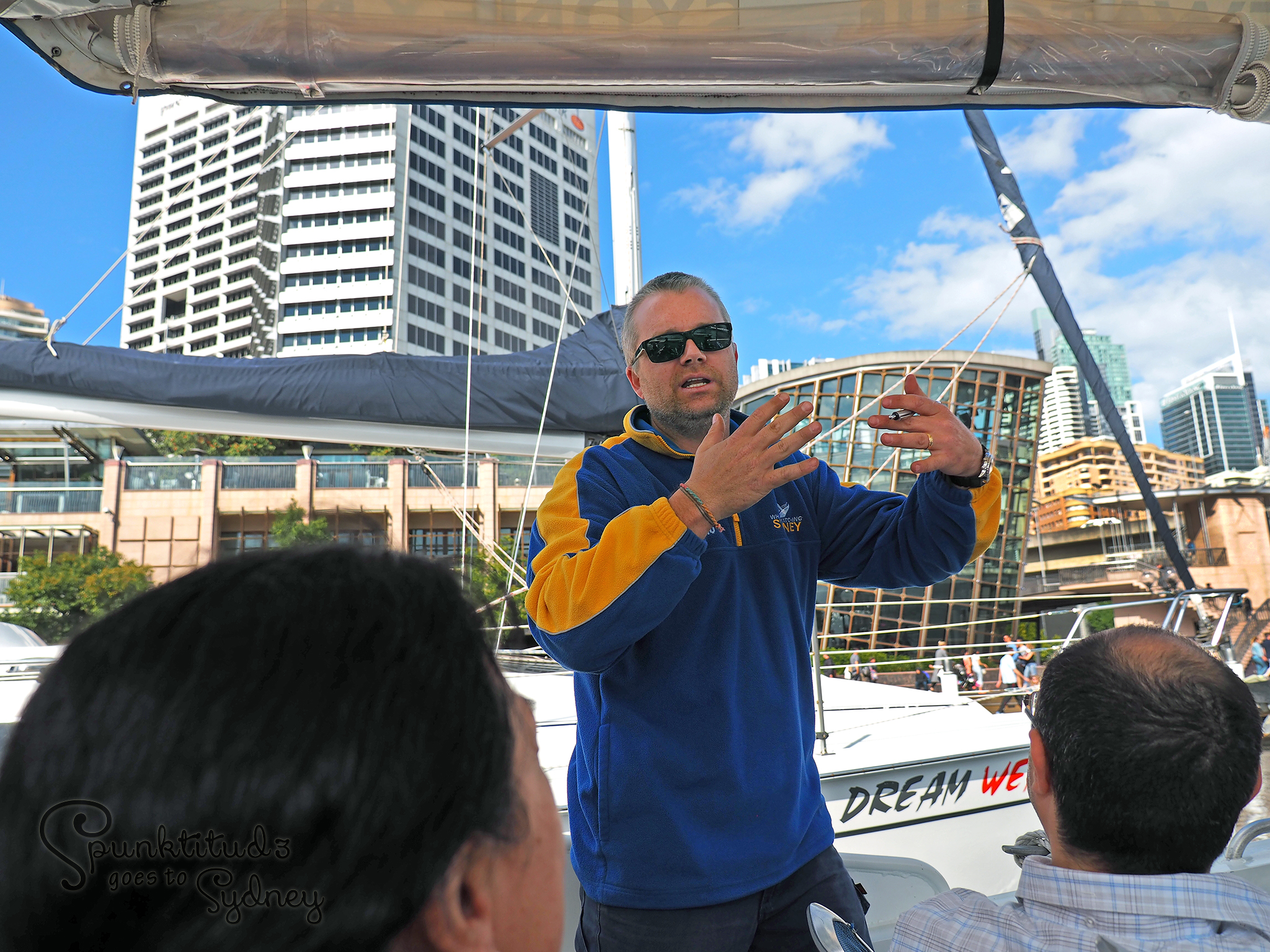 While you can watch the whales on numerous land-based vantage points in NSW national parks, I opted to join a 2-hour Adventure Cruise to increase my chances of spotting them in the deep blue sea. 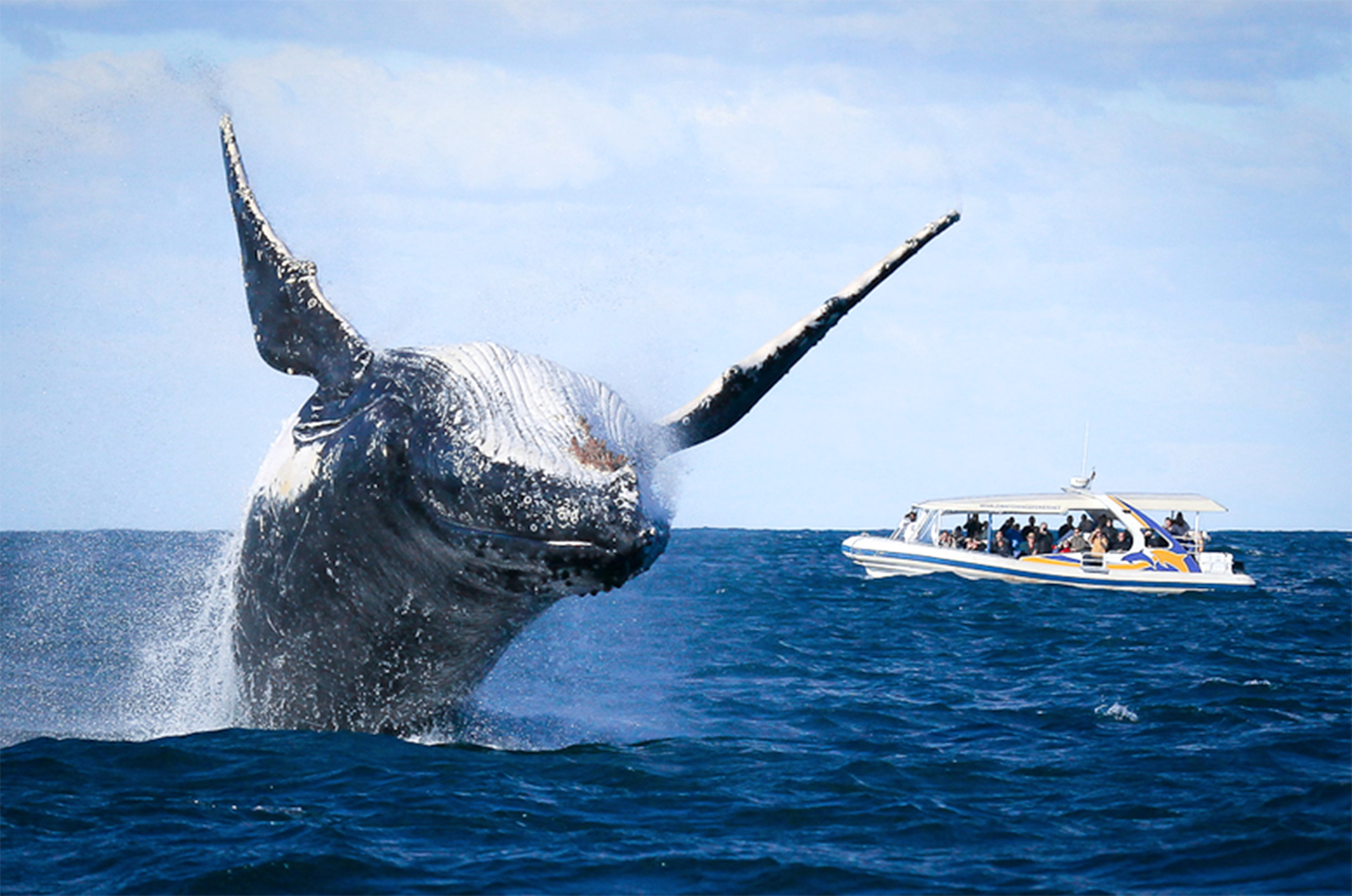 After seeing the promotional images, who could ever resist such an opportunity? I opted for the smaller speed boat as it can go faster than cruise ships and the open deck would allow whale watching from all angles. But with agility, also meant smaller size boat and a speed ride that could rival Universal Studio’s. I was clinging to a pole like a koala bear most of the time, and your camera shutter speed has to be at least 1/1000s to be able to minimize blurred photos.
(Source: Whale Watching Sydney) 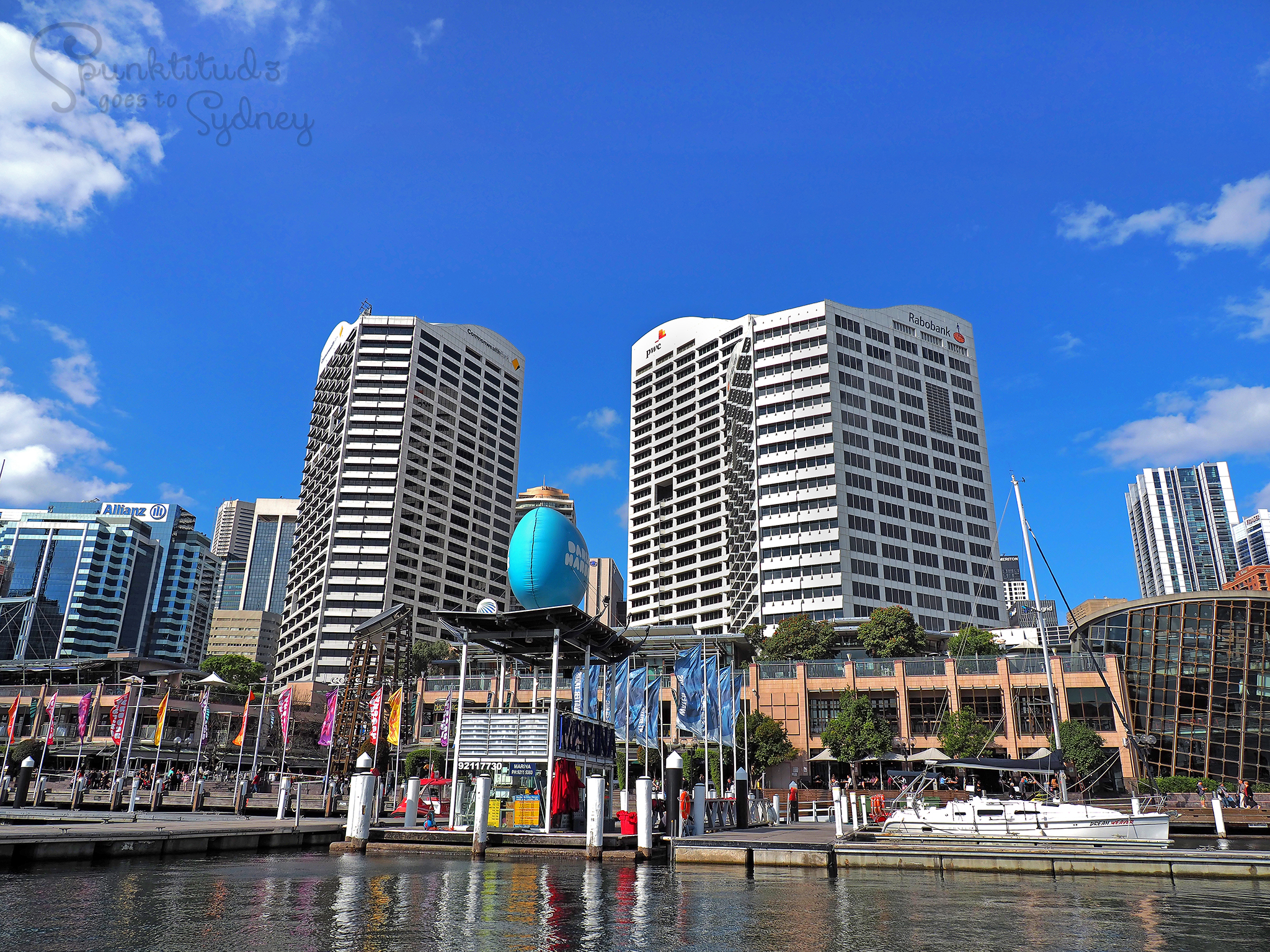 We started off our adventure from Darling Harbour. We were lucky to have good weather, and a nice view Sydney’s skyline. 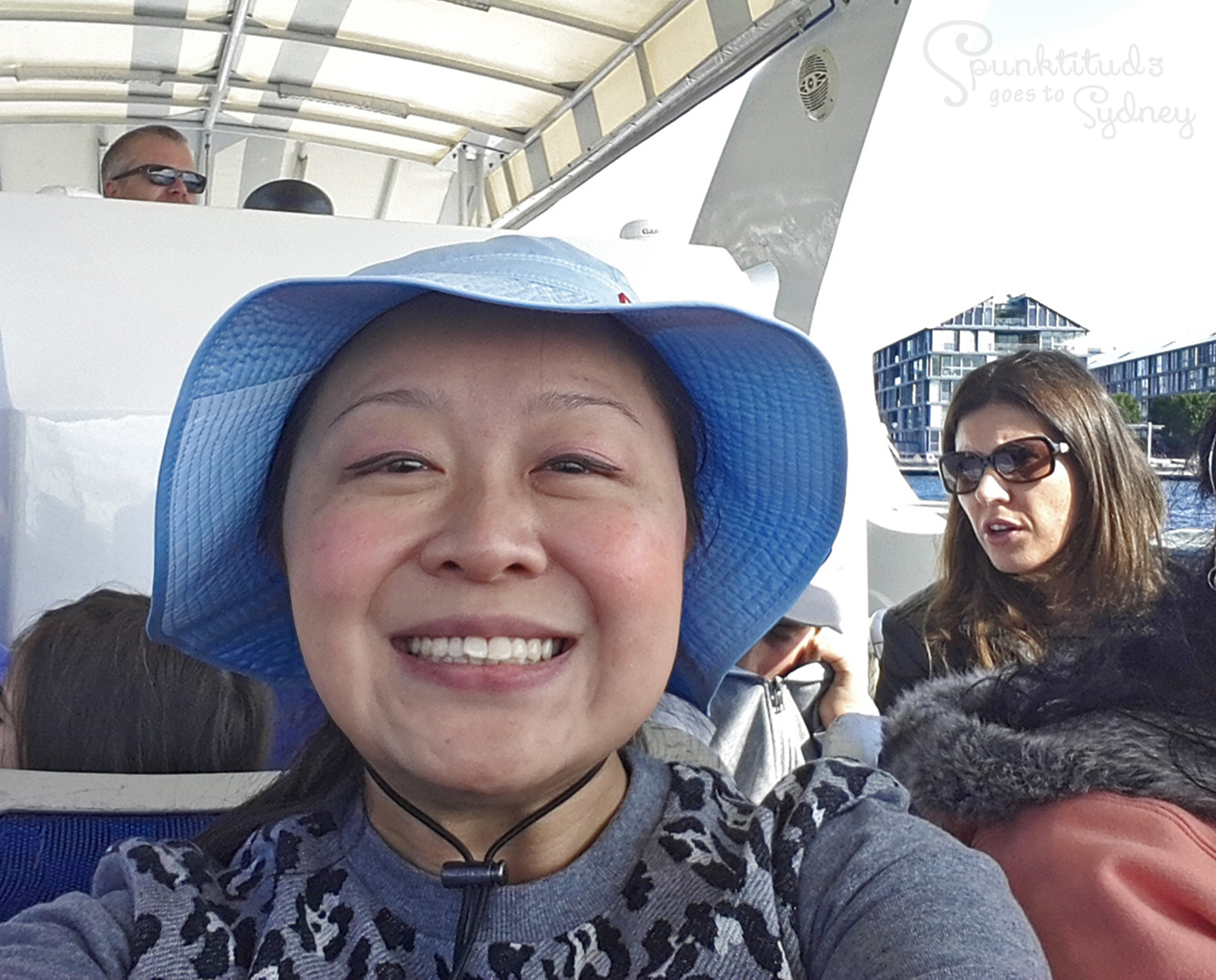 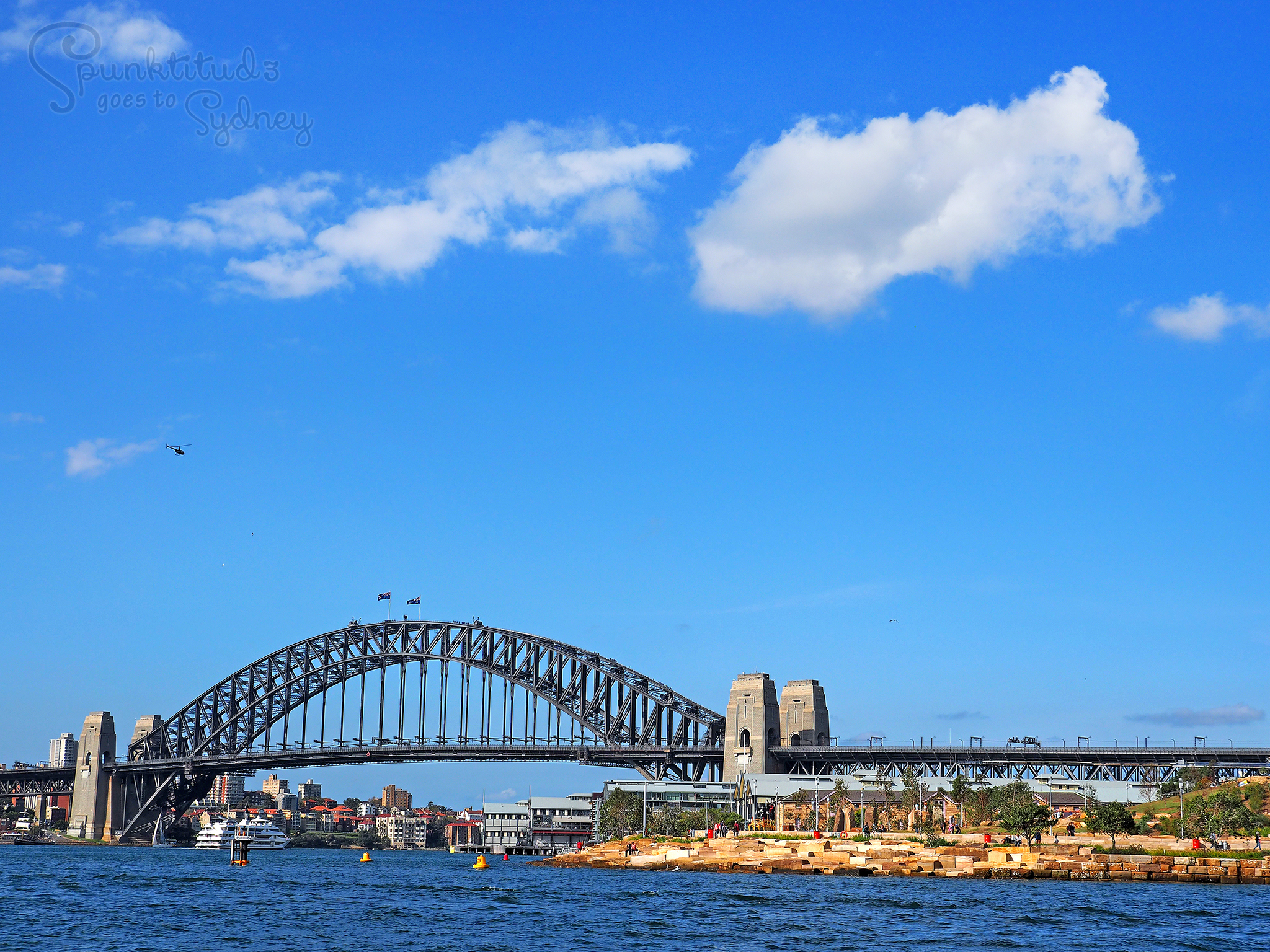 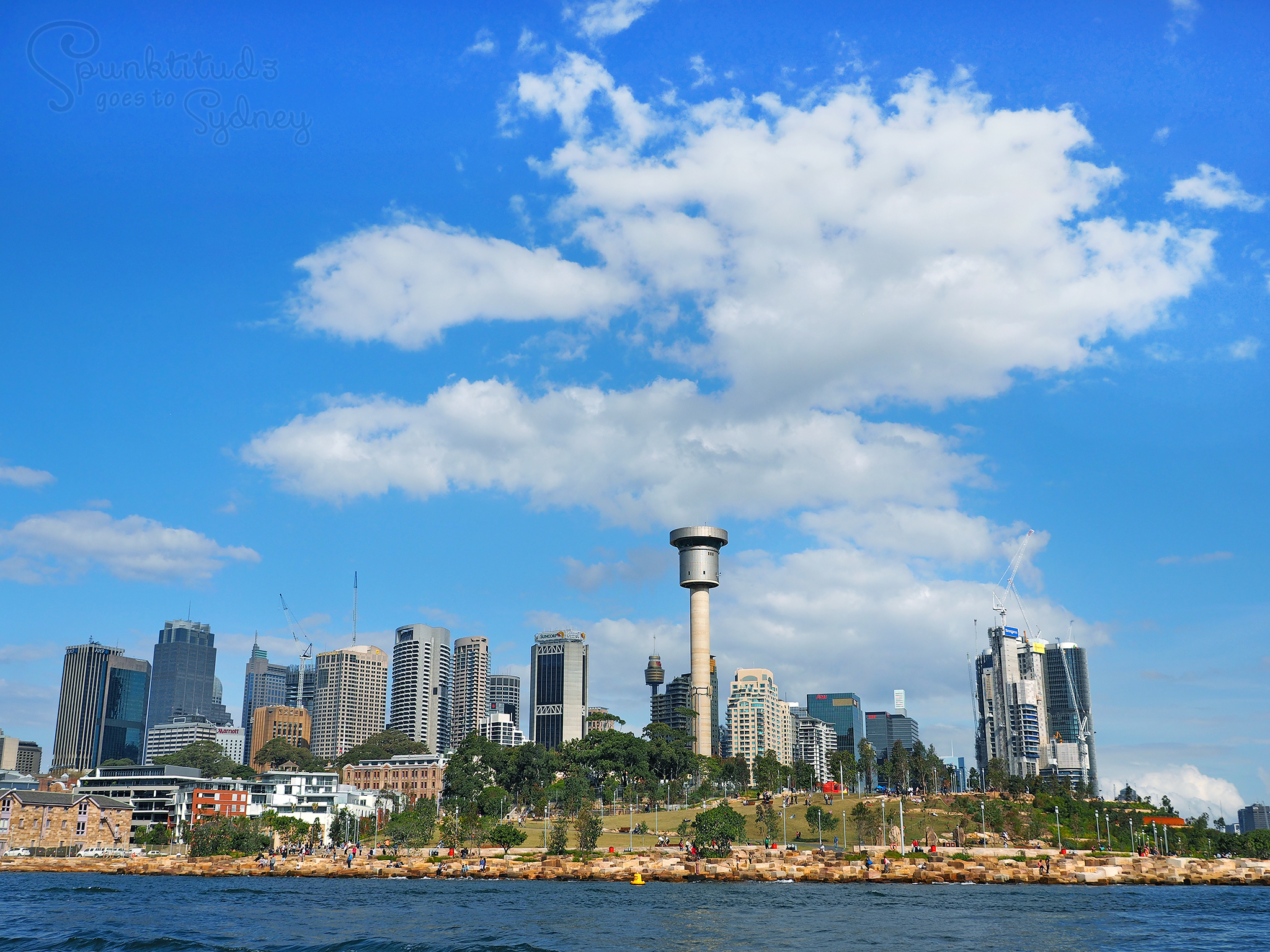 Spotted a lot of people at the park on a nice, sunny weekend afternoon 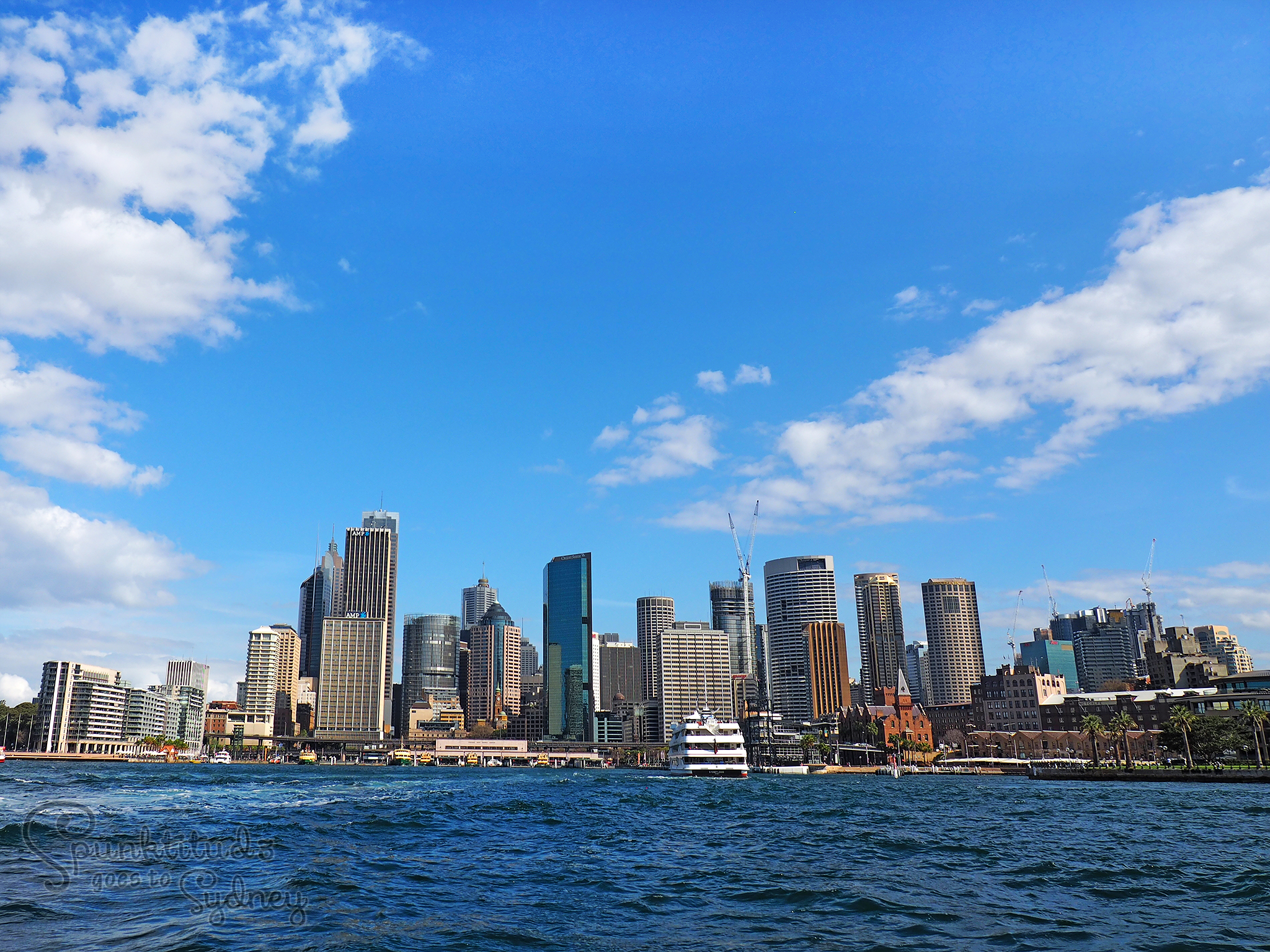 Heart of the Sydney Business District 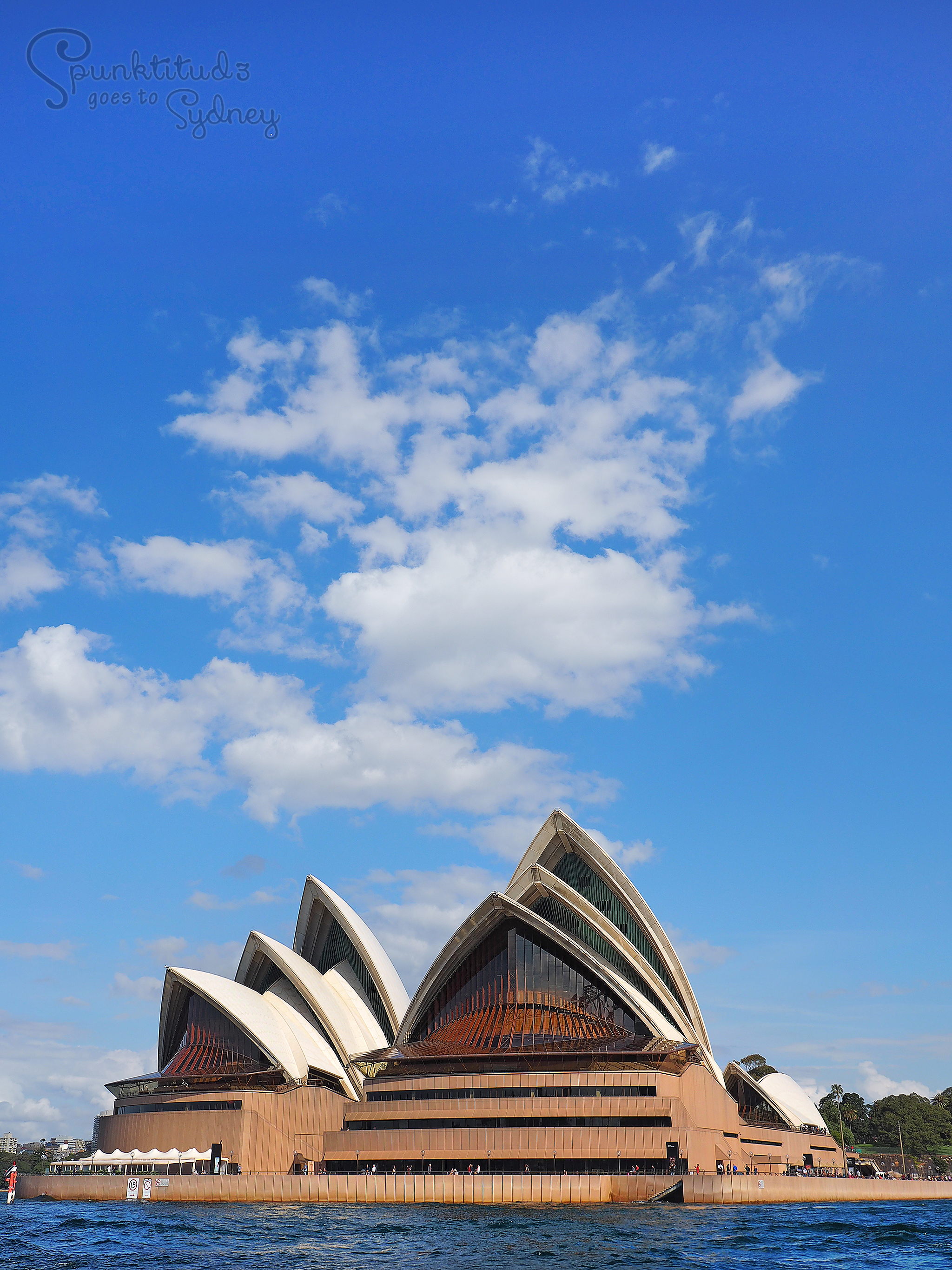 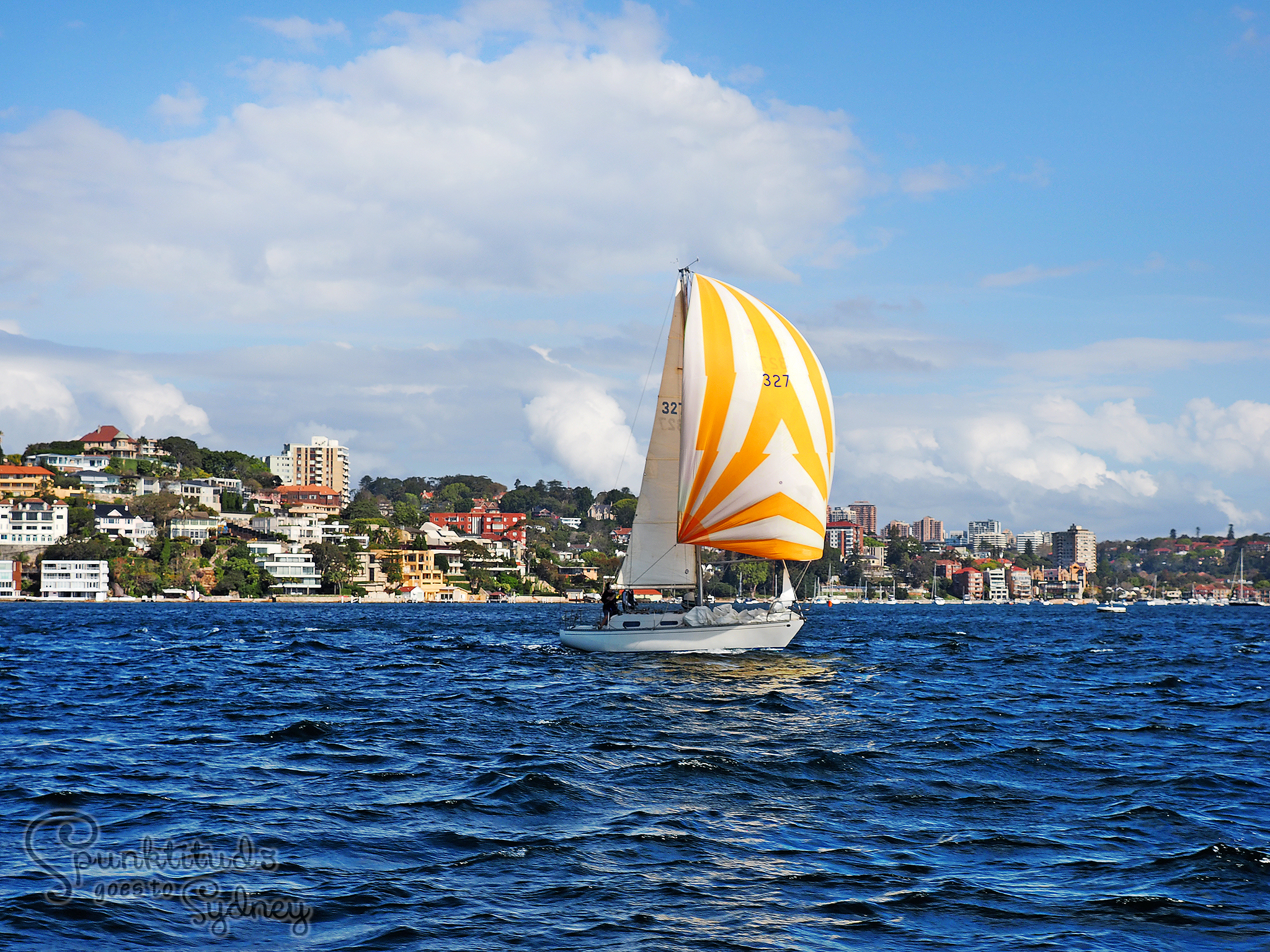 Blow, wind blow. Look how blue the water is! :) 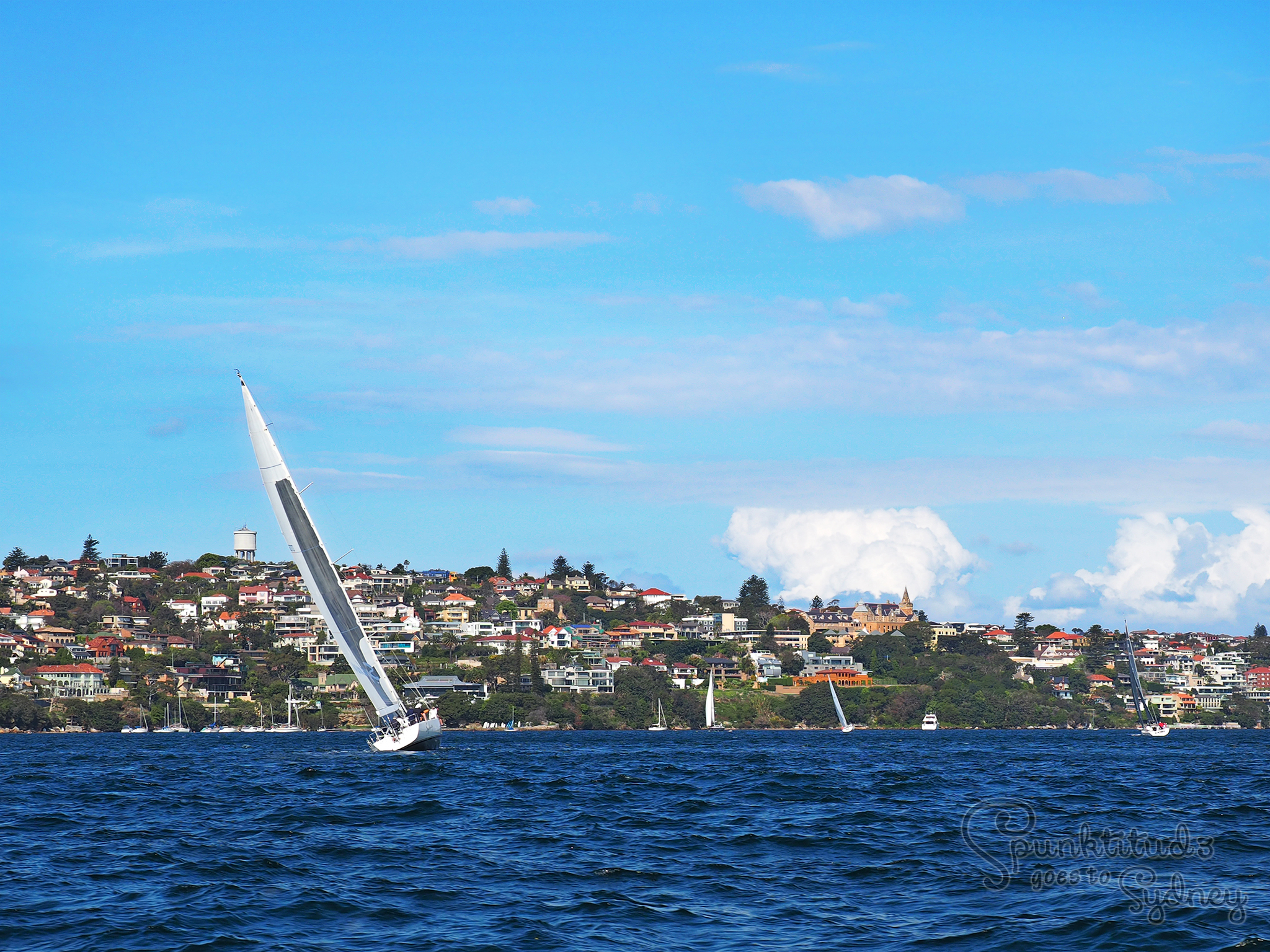 Time for some sailing stunts. I would love to have a house here… 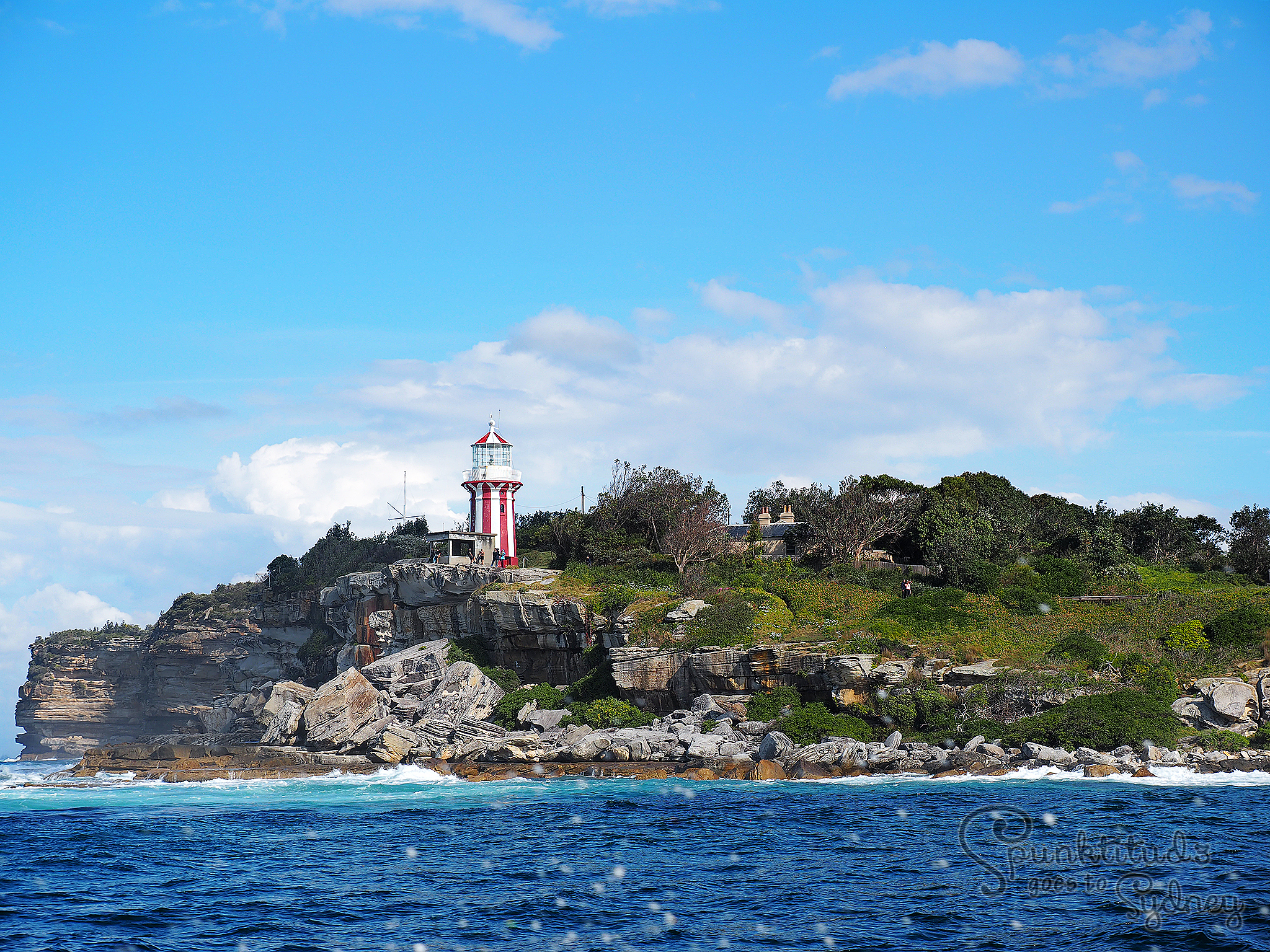 Spotting the candy-striped Hornby Lighthouse at Watsons Bay got me all excited – I remember walking the South Head Heritage trail just few months ago :) It’s also a whale watching vantage point. I will be back… 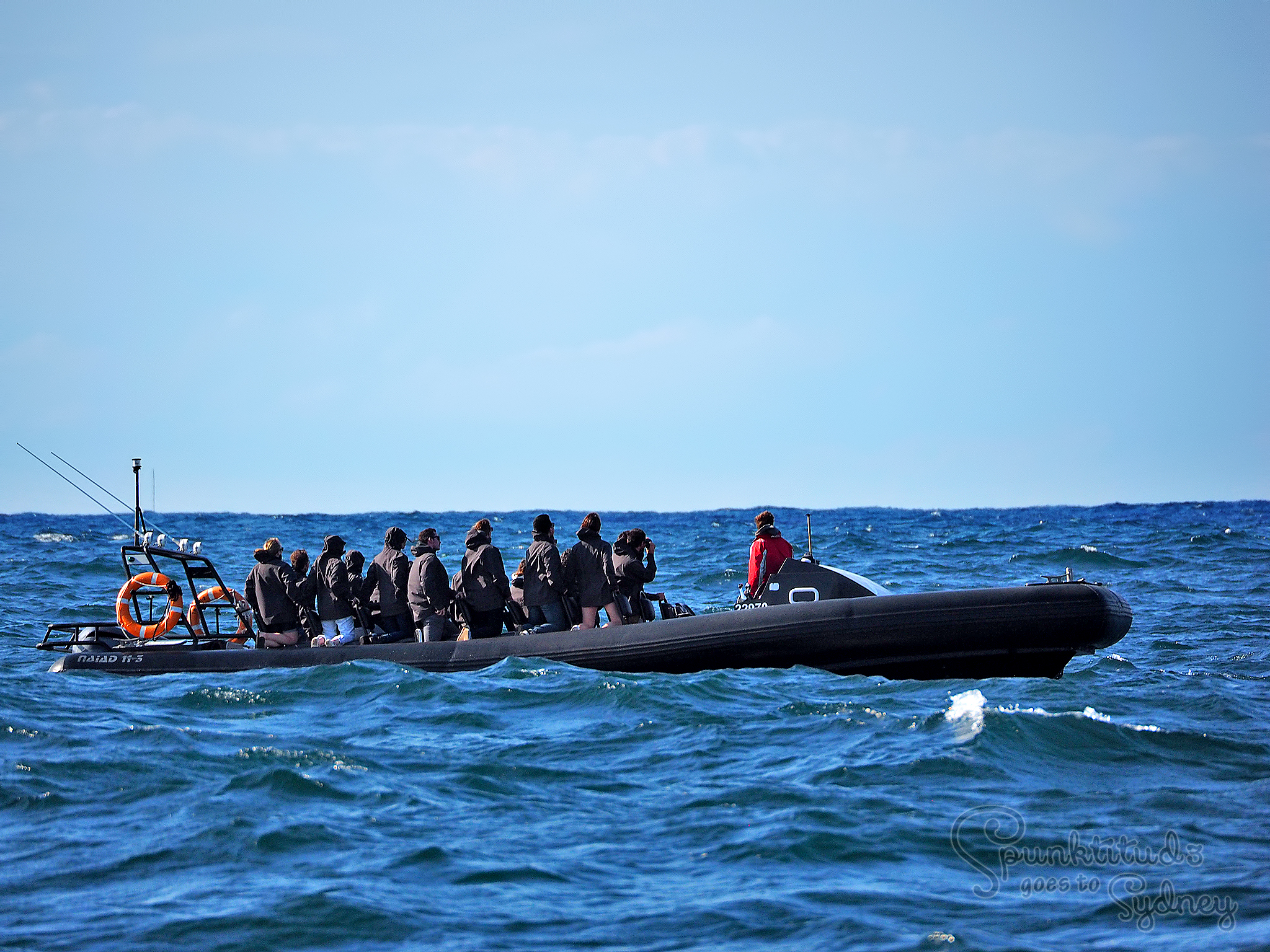 Here we are in the open sea! I was just griping about how small and rocky our little speedboat was until I saw this open boat/dinghy – I think I would have peed in my pants if the whale came up just in front of me. 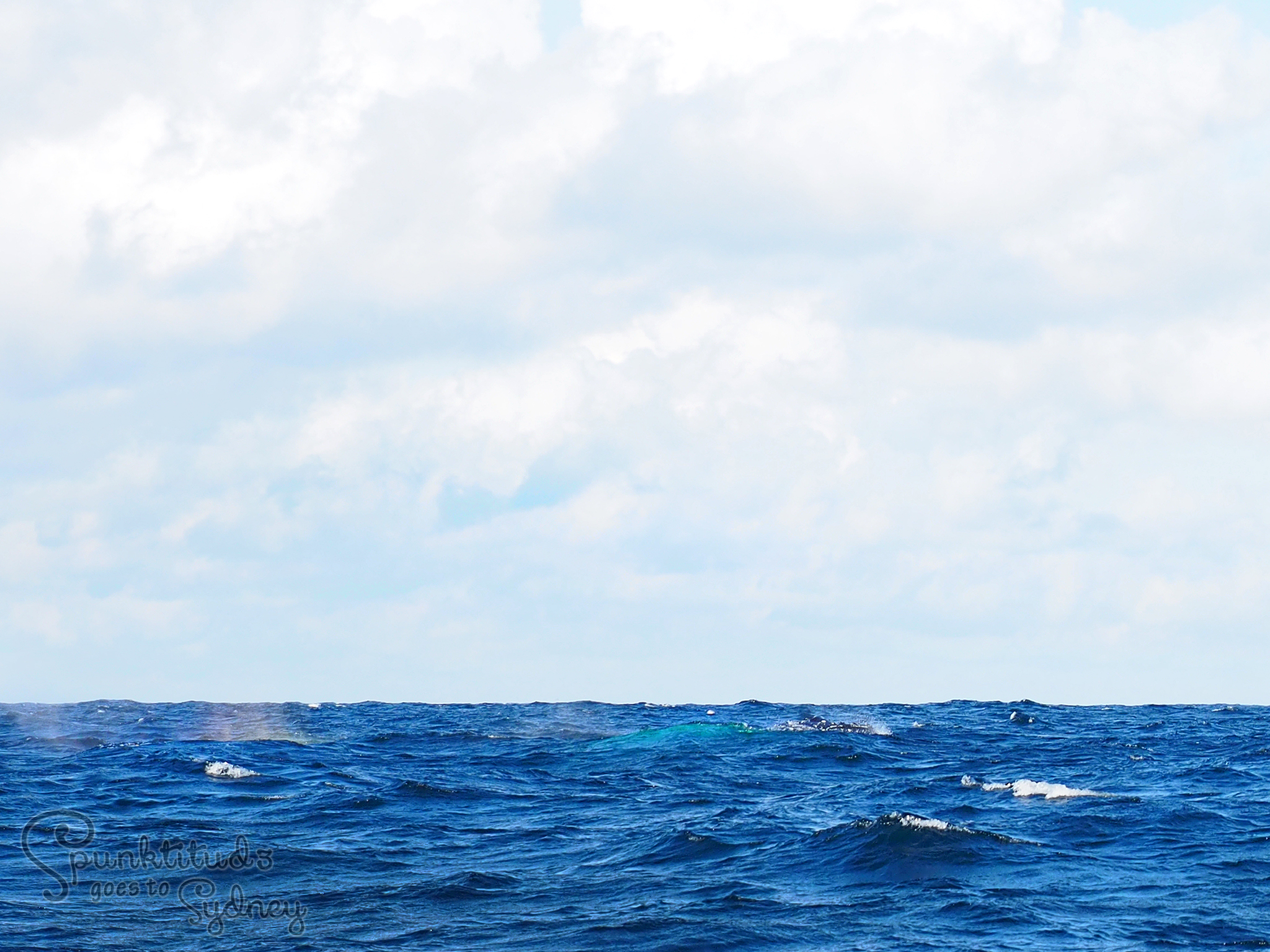 And the waiting game begins…according to our guide, the easiest way to spot a whale is to look for spouts/blows made by the whale, and a greenish shape in the water as the whale emerges (can you spot that in the photo?). Did you know the blow is distinctive to each whale species – humpback (tall, column-shaped blow); orca (bushy shaped); gray (heart-shaped!). The mammal can stay underwater for as long as 10 minutes, so you have to be verrry patient. 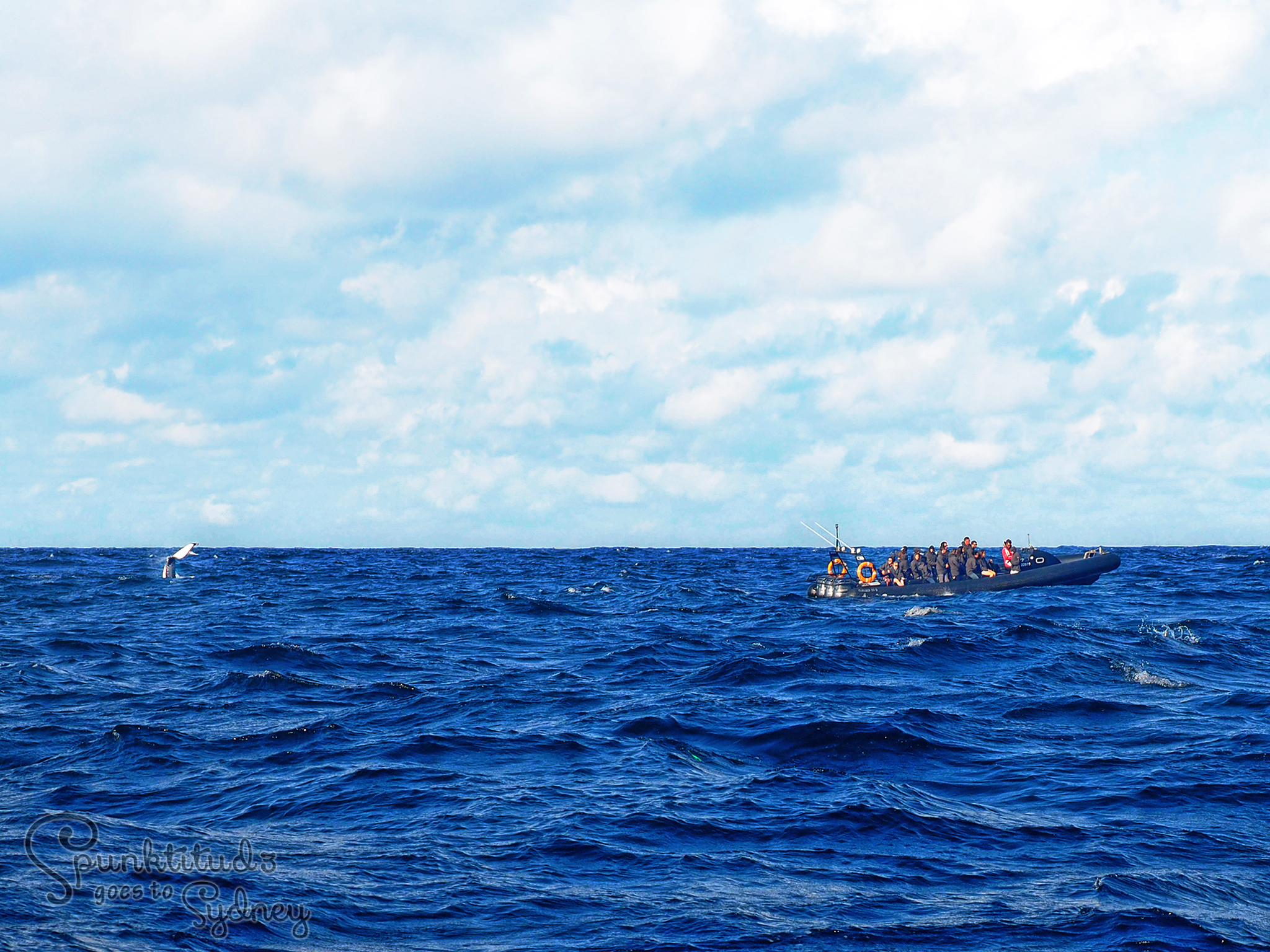 Erm guys, look behind you!! *the tail waves hello*

This was the best I could get on my virgin whale watching adventure. I didn’t even get to see your face, and I didn’t know what I actually saw until I went home to check – a rare albino humpback whale. This would be my second amazing milestone made in Sydney – the first being catching the New Years Eve fireworks : ) 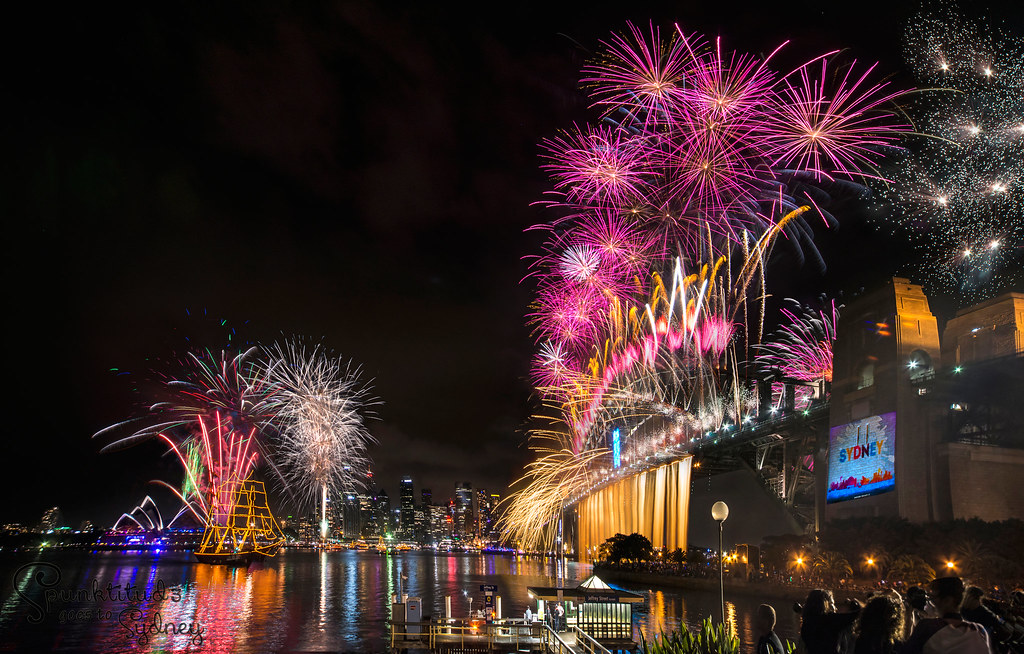 Taken from Cope’s Lookout, Kirribilli
A good place to wait out the 16 hours to see the fireworks up-close. However, you are not able to see the fireworks on both sides (there are 3 main firing points). In my opinion, Mrs Macquarie’s Chair or an elevated viewpoint would be an excellent vantage point to capture the full glory of Sydney’s annual New Year’s Eve fireworks.