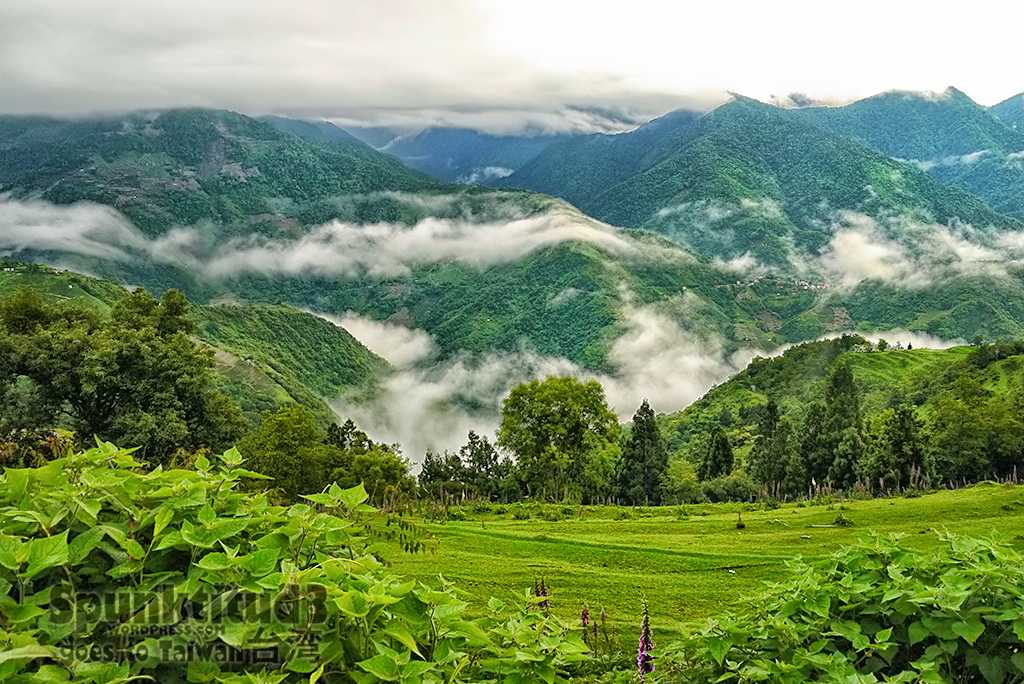 Immerse in the fresh air and the scenic greenery of Cingjing 清境 at 2000 metres sea level – it’s heavenly!

One of the must-have experiences in Taiwan is staying in a minsu (民宿), also commonly known as homestay or bed-and-breakfast. These minsu often come in different themes and décor, and there’s one for you whether on a shoestring budget or nothing-but-the-best. Minsu owners are usually very friendly, make you feel at home and are very knowledgeable about the area. The owners often drive their guests to nearby attractions for free, or help to arrange trips around the vicinity for a nominal fee. Best of all, you get a sumptuous home-cooked meal at a home-away-from-home. Minsu is highly popular in Hualian and Yilan where it is close to nature – imagine gazing at the stars through your lodge and waking up to a picturesque scene of the hills! We chose to stay at a minsu at Cingjing (Nantou南投 district) which is about 3 hours away from Taipei. 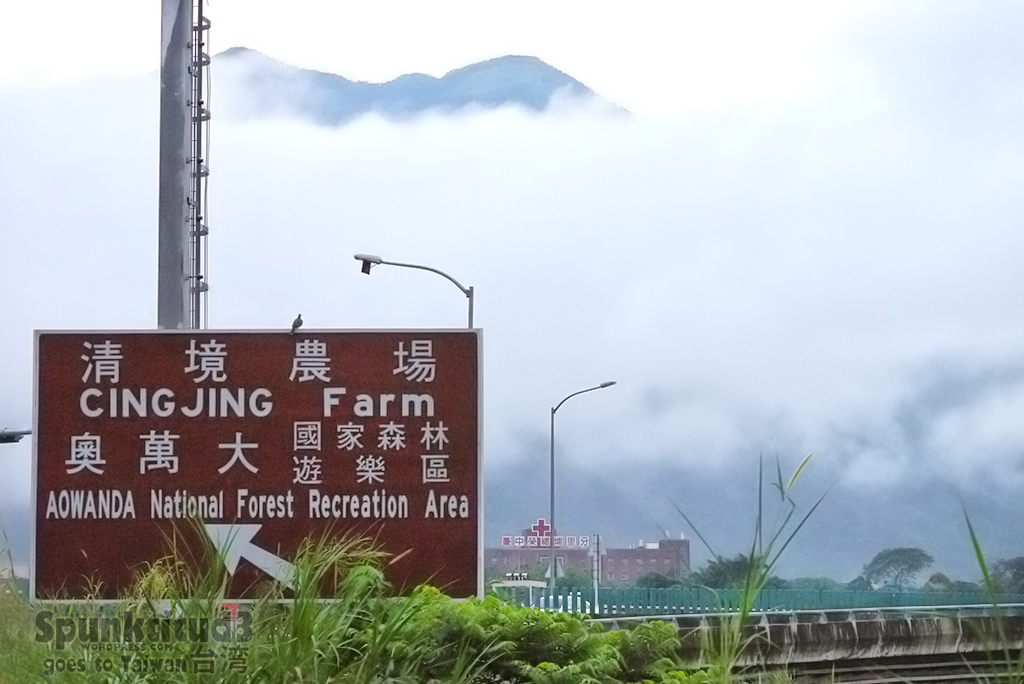 Cingjing is one of the most scenic areas in Taiwan and the views up there is simply amazing – I felt like a fairy walking on heaven! 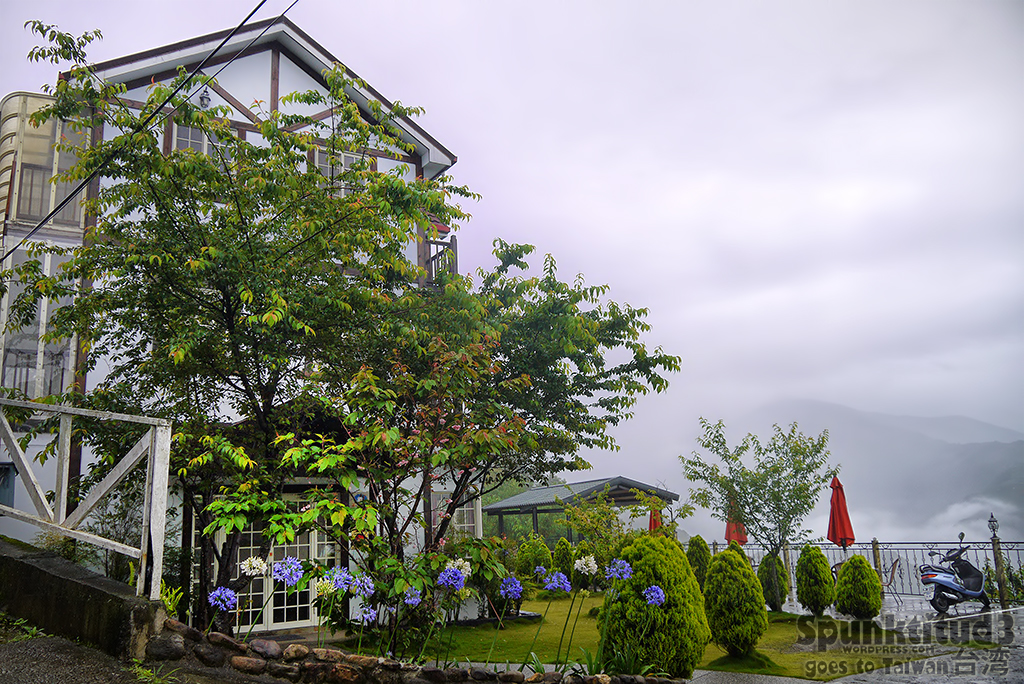 Ta da! We are at Qingjing Xiaozhu 清境小築, home up in the hills for 2 days. Cinjing is very popular for weekend trips from Taipei, just to get away from the hustle and bustle of urban living. 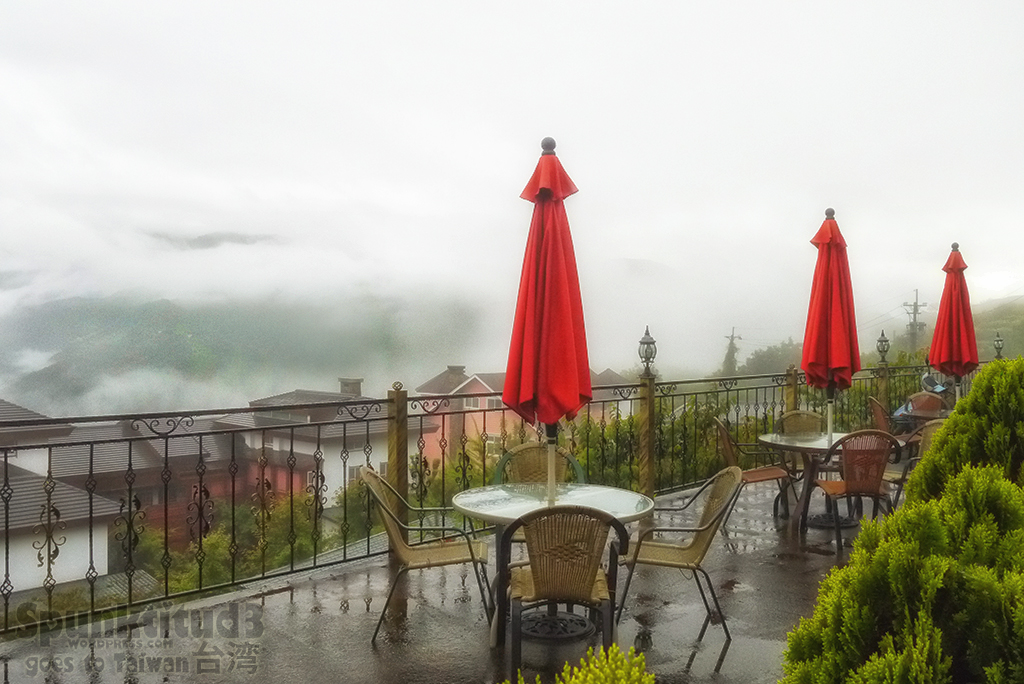 Cingjing’s view is wonderful! No matter the season, you can expect a nice 15 ⁰C. Do book a minsu which is higher up the hills for a good scenic view. Ours came with a beautiful terrace. I can imagine sipping tea and chatting leisurely about life here. 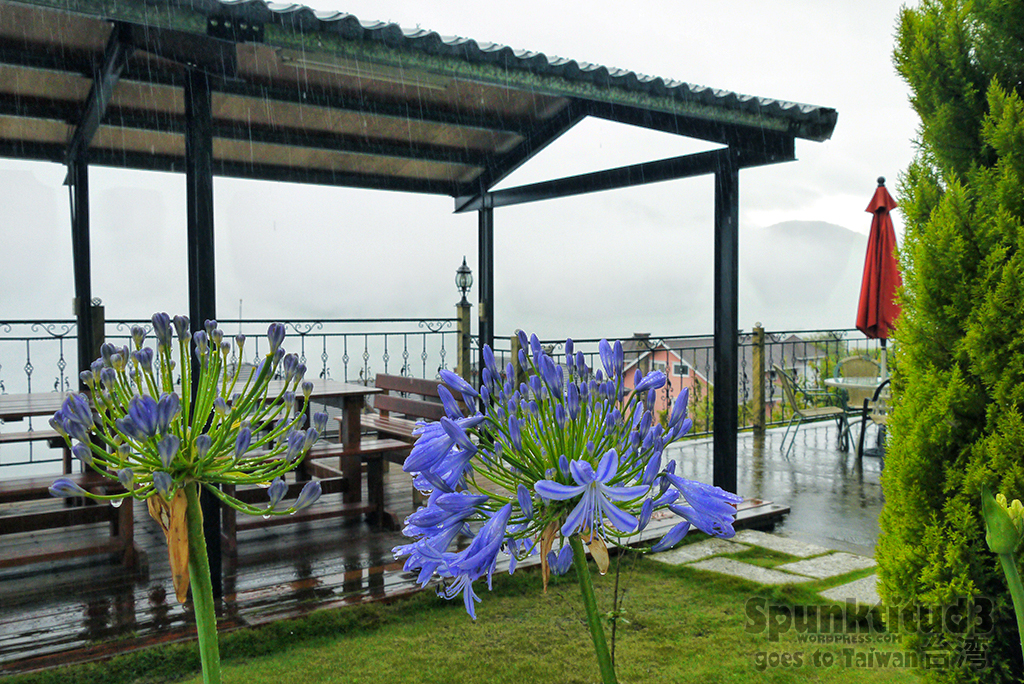 Even the flowers look especially alluring up in the mountains. 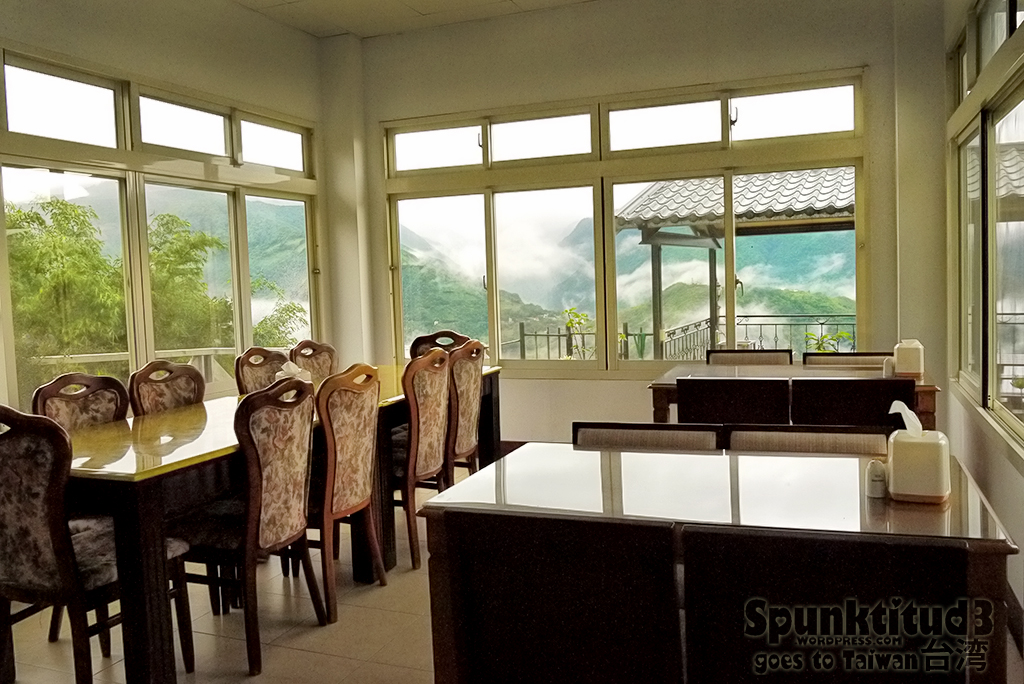 Meals are served in this cosy dining hall. 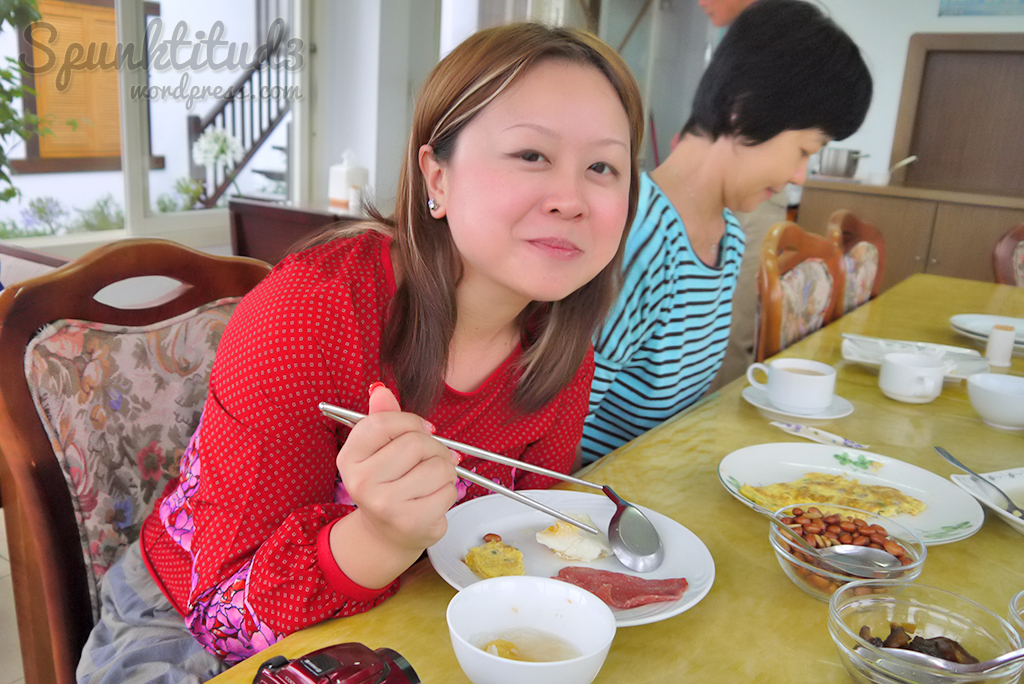 Simple home-cooked breakfast to start the day with 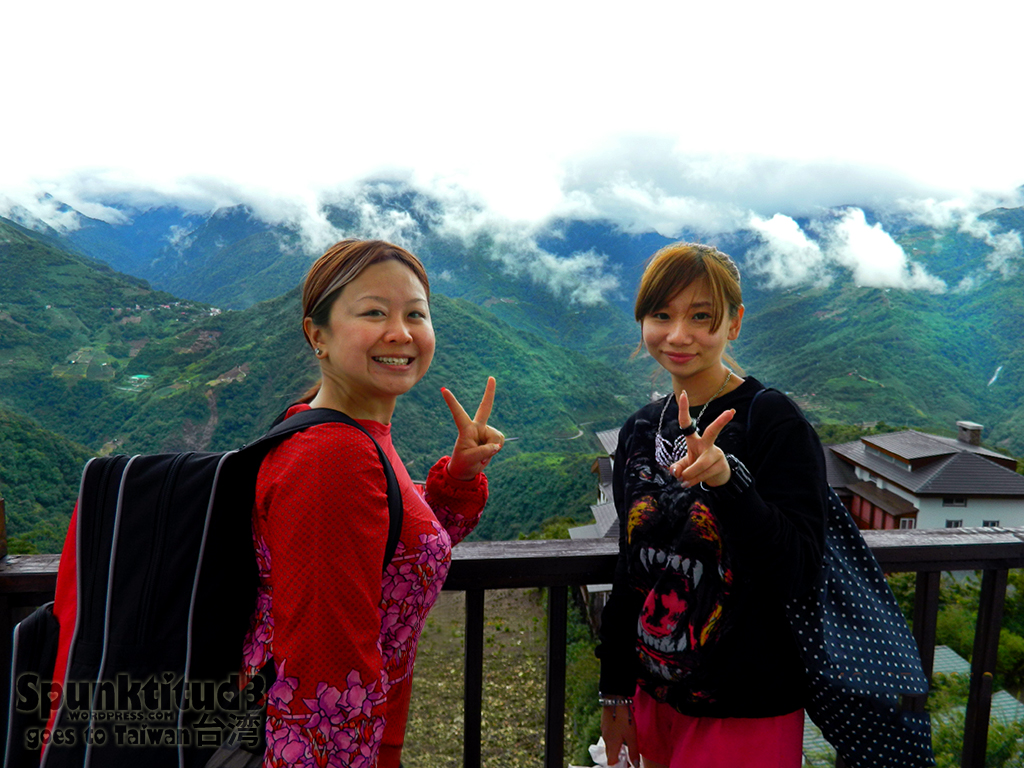 Checking out the view from our balcony – excited! 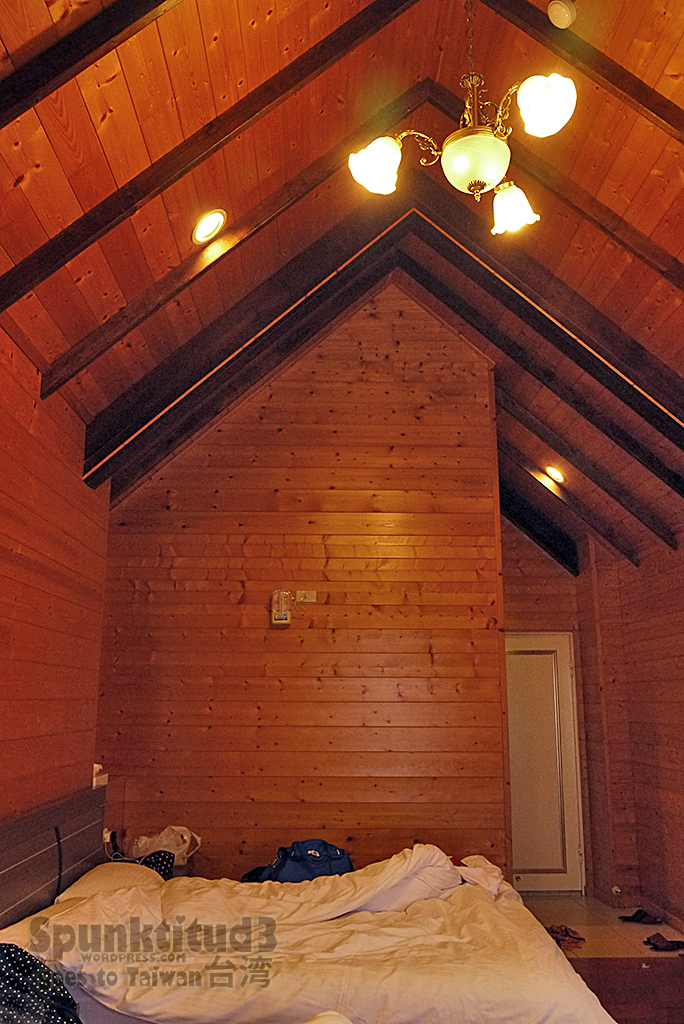 There are only 5 rooms at the minsu which can accommodate 2 to 4 guests. We took the bigger room and added a bed for 5 of us. 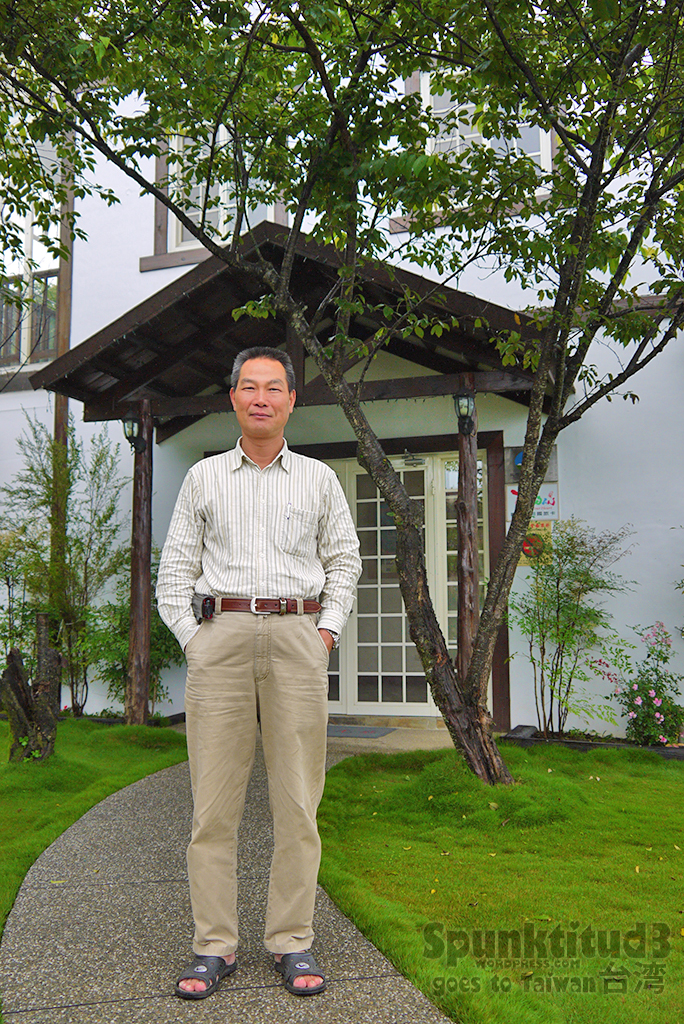 Here’s the friendly owner of the minsu 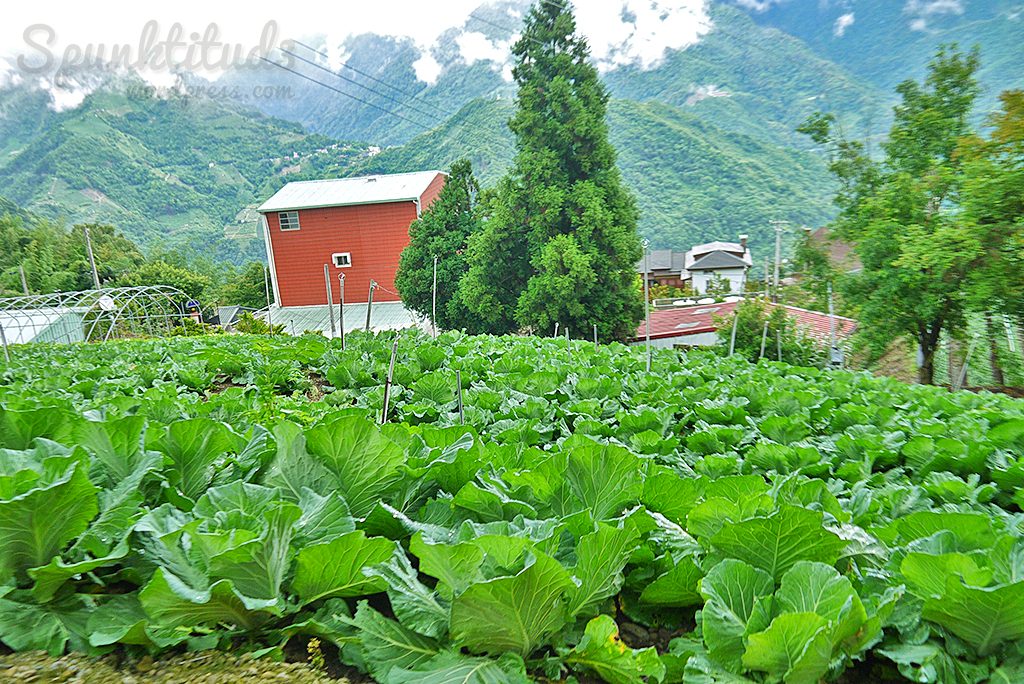 We saw many patches of vegetable plots around the vicinity (山菜), all looking so fresh and abundant! Someone quick pass me the salad bowl… 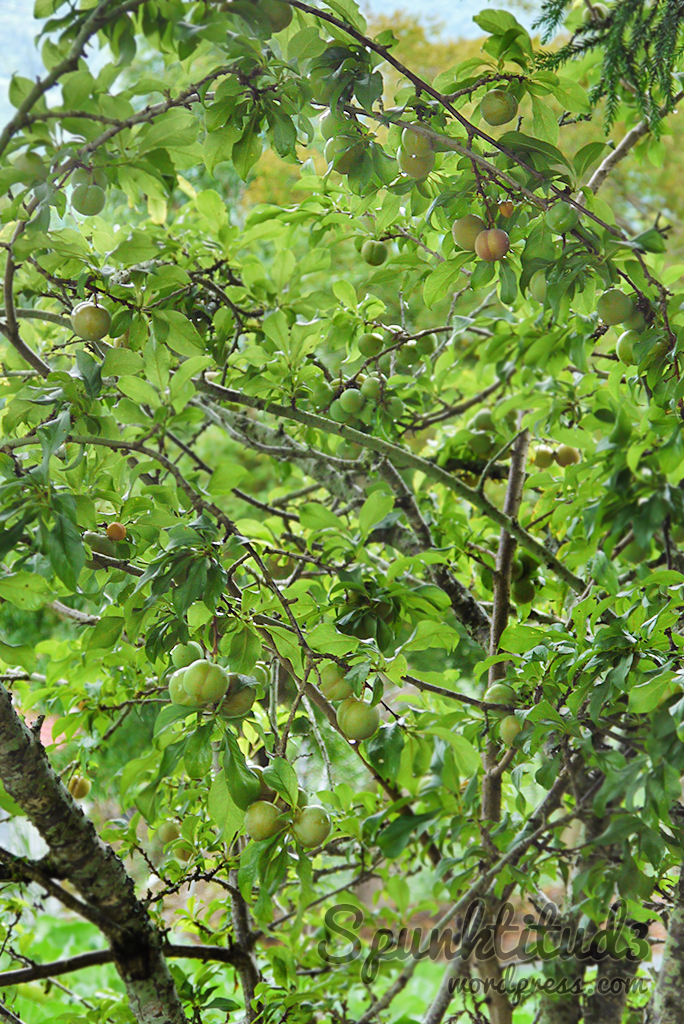 I was told this particular plant is called por4 por4 ji4 (树子), and it tasted SO GOOD when fried with mountain vegetables! 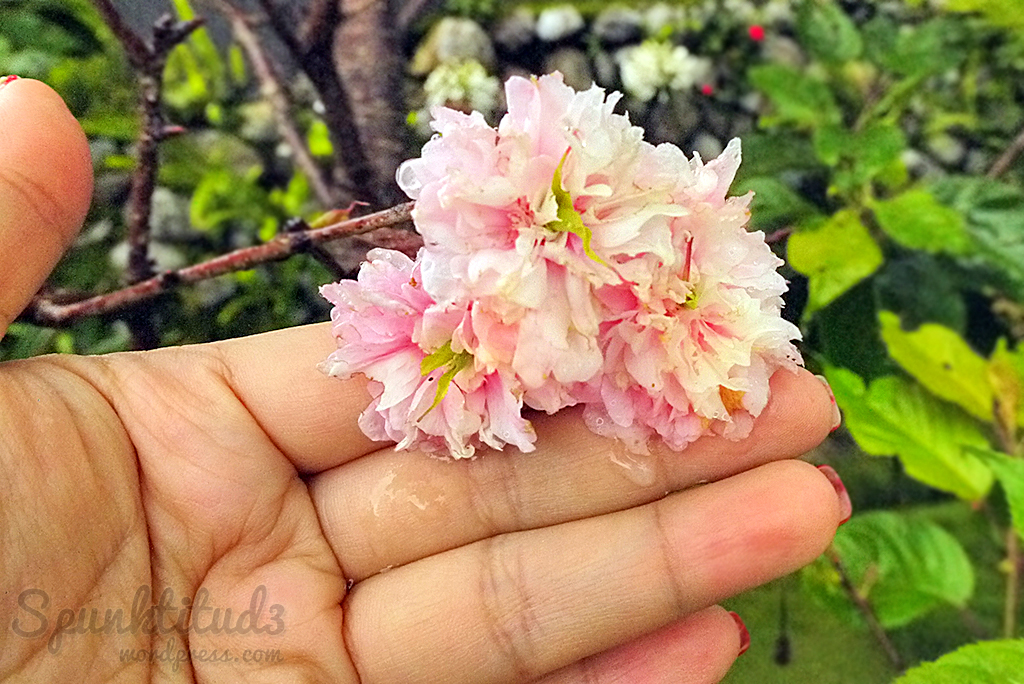 We saw cherry blossoms at the minsu too 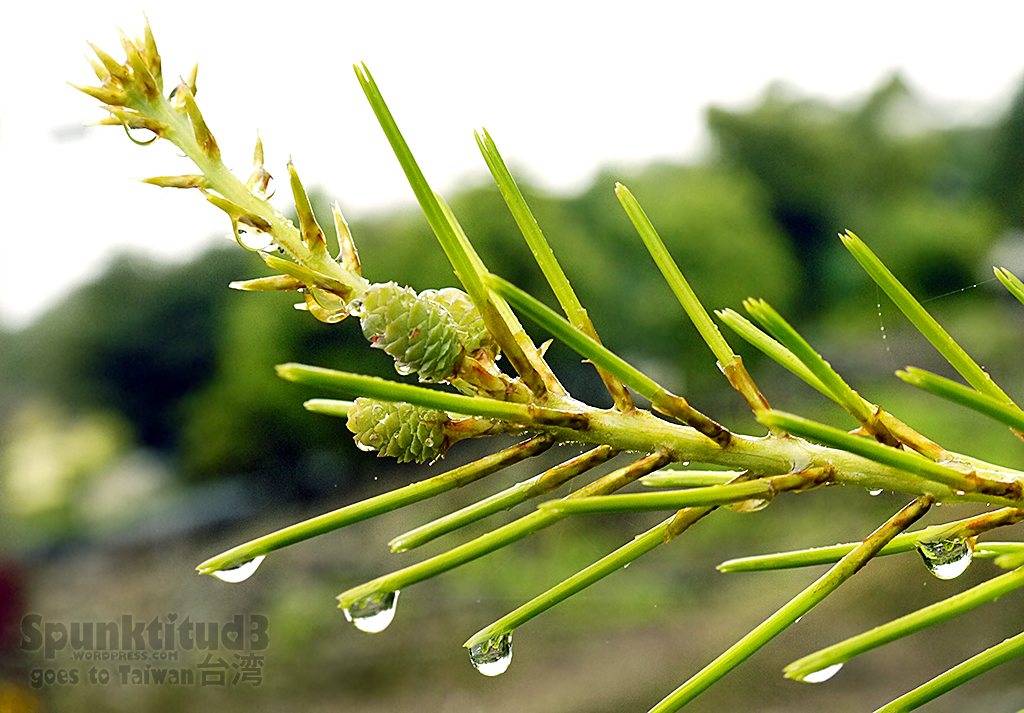 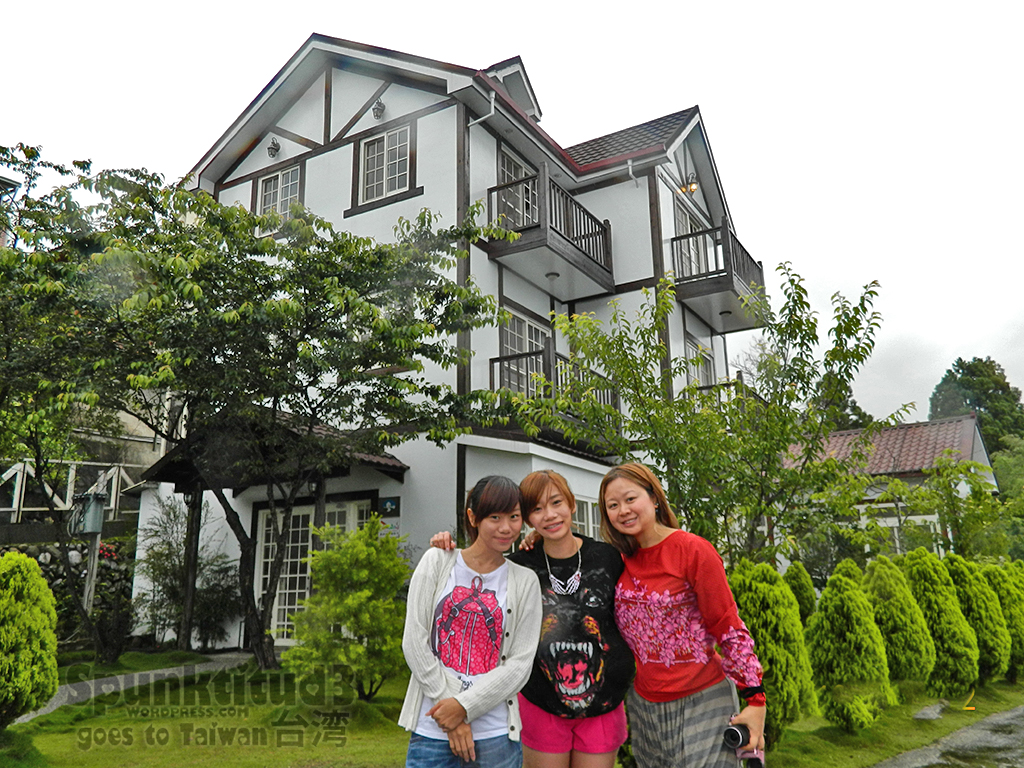 A wefie to remember our trip together ☺ We enjoyed our stay at Cingjing, we will be back! 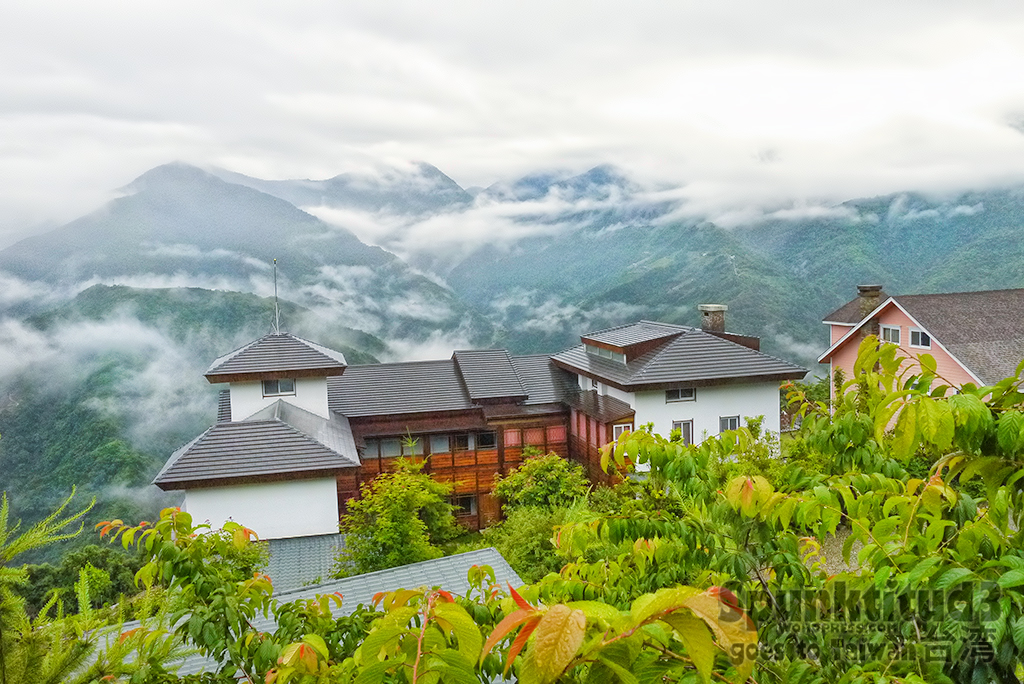 I’ll leave you with this amazing photo of Hehuan Mountains…tempting, tempting…you just have to see it for yourselves *wink*

Getting to Cingjing from Taipei
Take the HSR Train from Taipei Main Station to Taichung HSR station in about 50 minutes. Once at Taichung, take a taxi to Cingjing or go to the Tourist Information desk beside Exit 5 to purchase round-trip bus tickets to Cingjing via stopover in Puli. The bus journey takes about 2.5 hours. Stop at Cingjing Guest House bus stop (清境農場國民賓館).

I checked out artisan gourmet store Dean & Deluca over the weekend and went for the golden girl look – matches the chi chi place I was visiting!

My hair matches the golden girl theme too!

Snow White and the Huntsman is nothing like the fairytale most of us grew up with – sweet, innocent princess grows up pretty to incur the wrath of her power and beauty-hungry wicked stepmother, escapes to the woods to meet 7 dwarfs and happily lives with them until the evil queen poisons her with an apple. She is saved only when a dashing prince comes and gives her the kiss of life. And then all the birds sing, animals come out to play, flowers bloom and everybody lives happily ever after. Nah-dah. This movie is nothing like that.

Cast of Snow White and the Huntsman

Instead, the movie sports a rather dark undertone, and the main character of the story seems to be the evil queen Ravenna (played by Charlie Theron) who feels like a mental nutcase about to explode anytime. No surprises at all if you notice that she is the one in the centre of the promotional movie poster instead of Snow White.

Can I have her headdress please? Gorgeous! And check out her arm rests

You can practically see the pain in her eyes as she goes about quenching her thirst for eternal beauty and ruthlessly killing anyone who stands in her way. It seems that the director of the movie has set out to make her a sympathetic villain simply out to fulfil her destiny – being taught at an early age beauty and magic are the only ways to wrest power from men who massacred her entire family, which explains her obsession with beauty. She practically sucks the youth out of young girls to keep her youth, and I almost lost my dinner when she dug out bird innards and ate them like escargots. Ewww. Her costumes are out of this world, and jewelry simply amazing – I would wear them in a heartbeat.

The Evil One takes a beauty milk bath

The evil queen is unfortunately the only character with a more fully-developed character. The other characters seem flat, or simply a token representation of the original fairytale. William’s (Sam Claflin) – the suppoused love interest – kiss couldn’t even wake Snow White from her death sleep – a grieving widower huntsman (Chris Hemworth) did the job instead. Duh. Then again, Chris Hemworth was HOT, and his apparent grief just makes you want to give him a big hug. I was pretty surprised when he kissed Snow White cos’ that literally came out of nowhere, and she was supposedly dead. Eek.

Snow White (played by Twilight’s Kirsten Stewart) is nothing like a damsel in distress, instead she is like Xena the warrior princess able to stand on her own and fight her own war – talk about female liberation! Other than that, her character hardly stuck a chord, so much so that I have nothing much to say about her. Perhaps the movie title should be “Ravenna and the Hot Huntsman” instead.

Chris Hemworth as the Huntsman with the seven dwarfs. The dwarfs are actually established actors such as Ray Winstone, Bob Hoskins, Ian McShane, Nick Frost and Eddie Marsan made to look small through special effects.

Props-wise, the magic mirror, which is such a crucial part of the fairytale that has been overlooked so far in other versions of the fairytale, is given an ‘upgrade’ in this movie too. Instead of just a talking face, the mirror morphs into a life-size gold figure which looks like the Grim Reaper while dispensing advice to Ravenna. The other parts of the movie looks borrowed from other movies – a white stag strongly resembles Harry Potter’s guardian Patronus and the set is reminiscent of “Lord of the Rings” amongst other things. The CGI of the movie is a saving grace and the cinematography is magnificent.

Here’s some trivia about the film courtesy of IMDB:

–Angelina Jolie and Winona Ryder were considered to play Ravenna, the Evil Queen.

–Charlize dropped out from J.Edgar to play this role.

Snow White And The Huntsman (PG13)

Synopsis
In the epic action-adventure Snow White and the Huntsman, Kristen Stewart plays the only person in the land fairer than the evil queen (Charlize Theron) out to destroy her. But what the wicked ruler never imagined is that the young woman threatening her reign has been training in the art of war with a huntsman (Chris Hemsworth) dispatched to kill her. Sam Claflin joins the cast as the prince long enchanted by Snow White’s beauty and power.