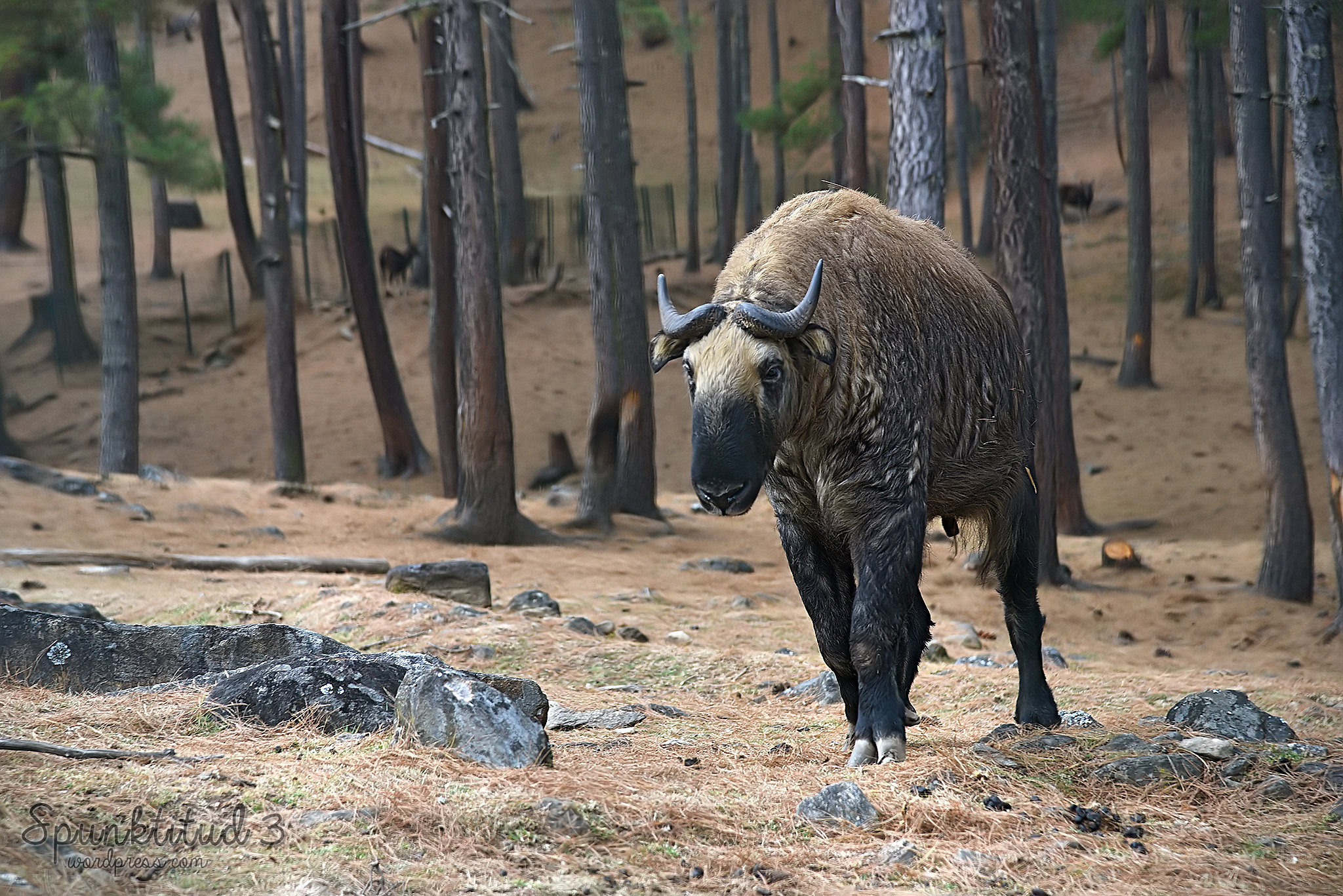 At Motithang Takin Preserve in Thimphu, you will find an interesting animal with the head of a goat and body of a cow. Its creation is linked to local mythology dating back to the 15th century. 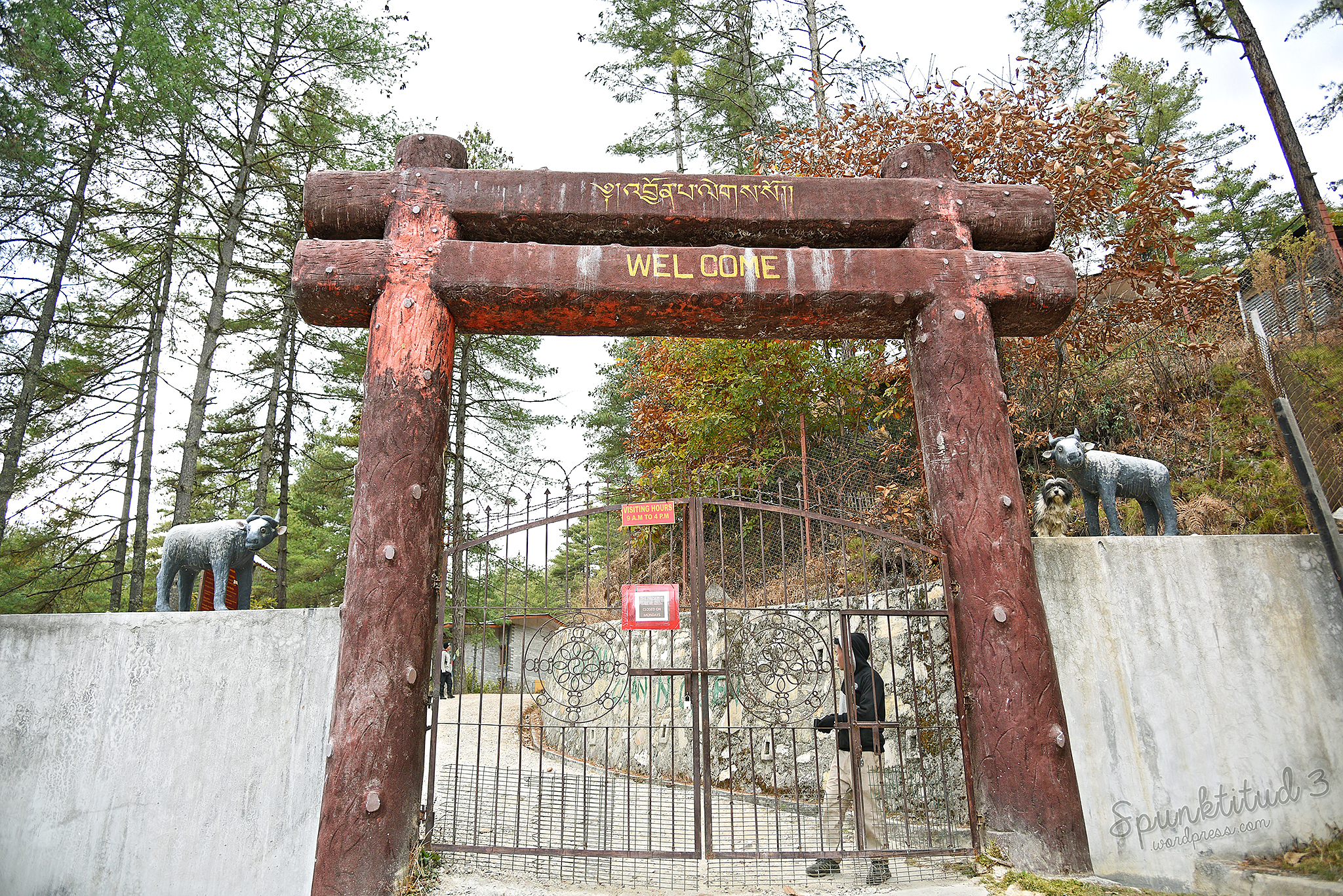 The wildlife preserve is located 15 minutes drive outside of Thimphu city, and about 40 minutes by car from Paro. Motithang was originally a mini-zoo which was closed because the King of Bhutan felt it was improper for a Buddhist country to confine animals. The animals in the zoo were released, but the gentle takin which have long been domesticated, didn’t leave the area and ended up roaming the streets of Thimphu in search of food. The 8.4 acre wildlife reserve was thus set up as a place where the takin can roam safely. 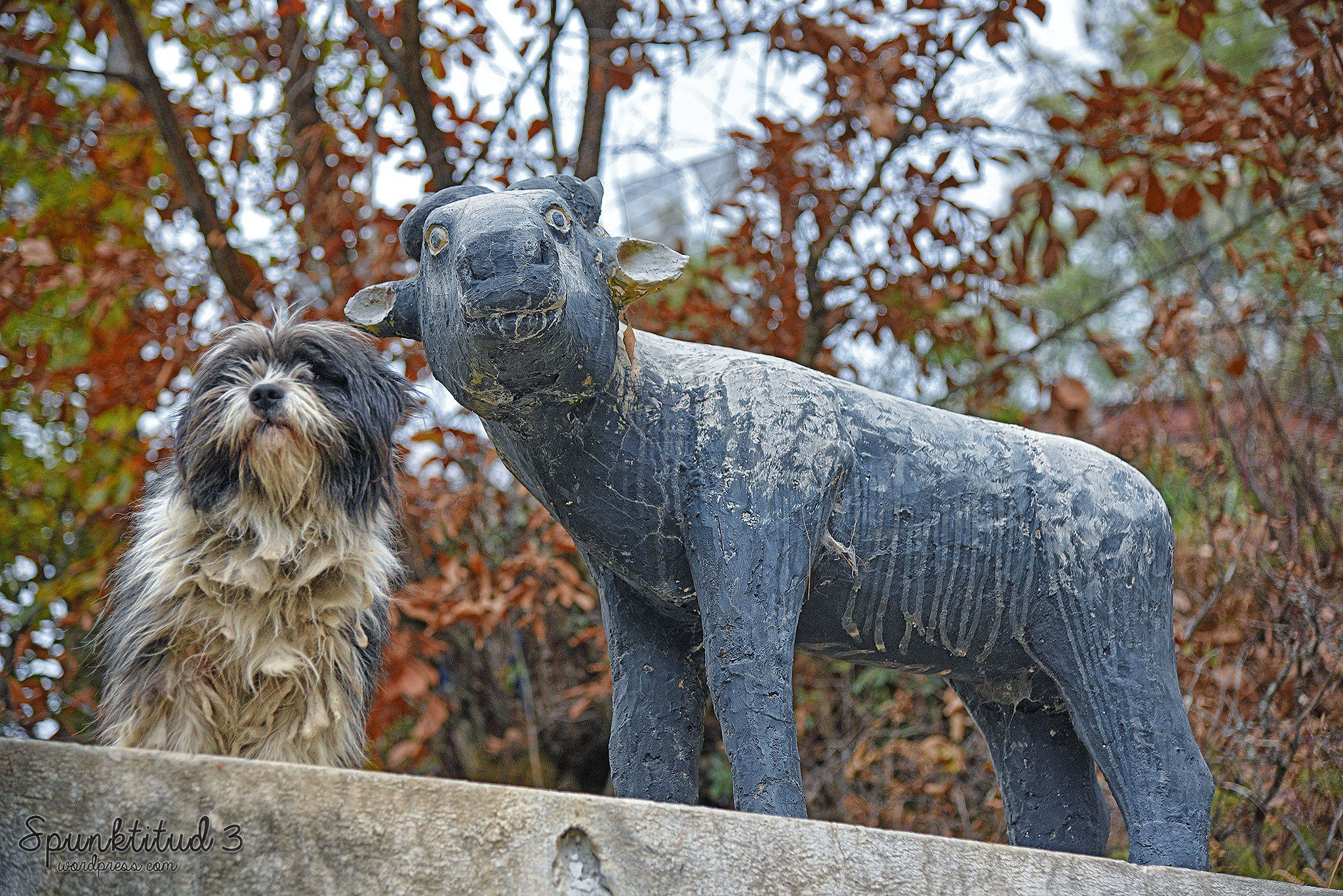 Our furry friend trying to masquerade as the mythical creature. So cute! 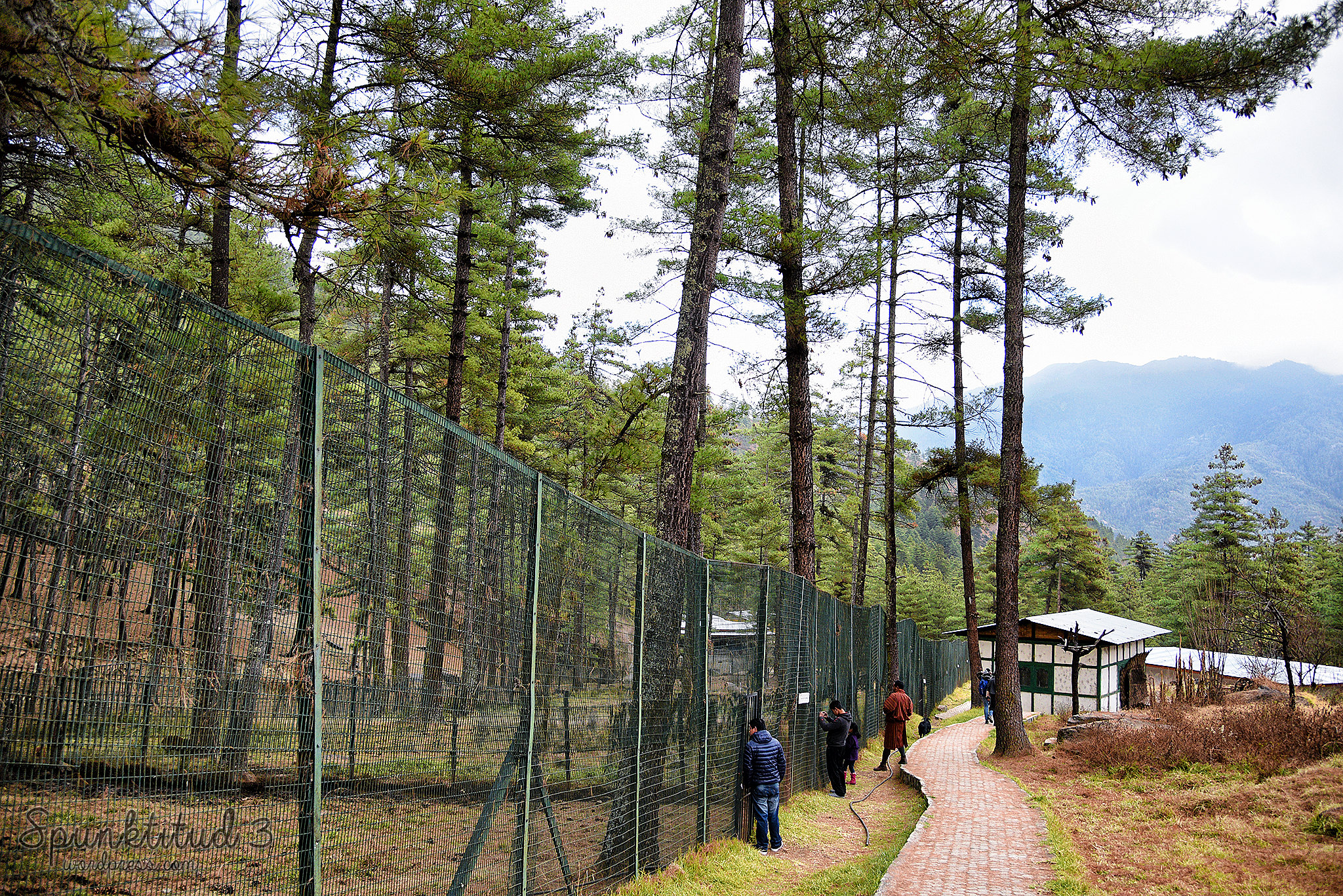 The wildlife preserve is mostly fenced up with some openings where visitors can take photos and get a clearer look. Otherwise, the privacy of the takin is highly protected. 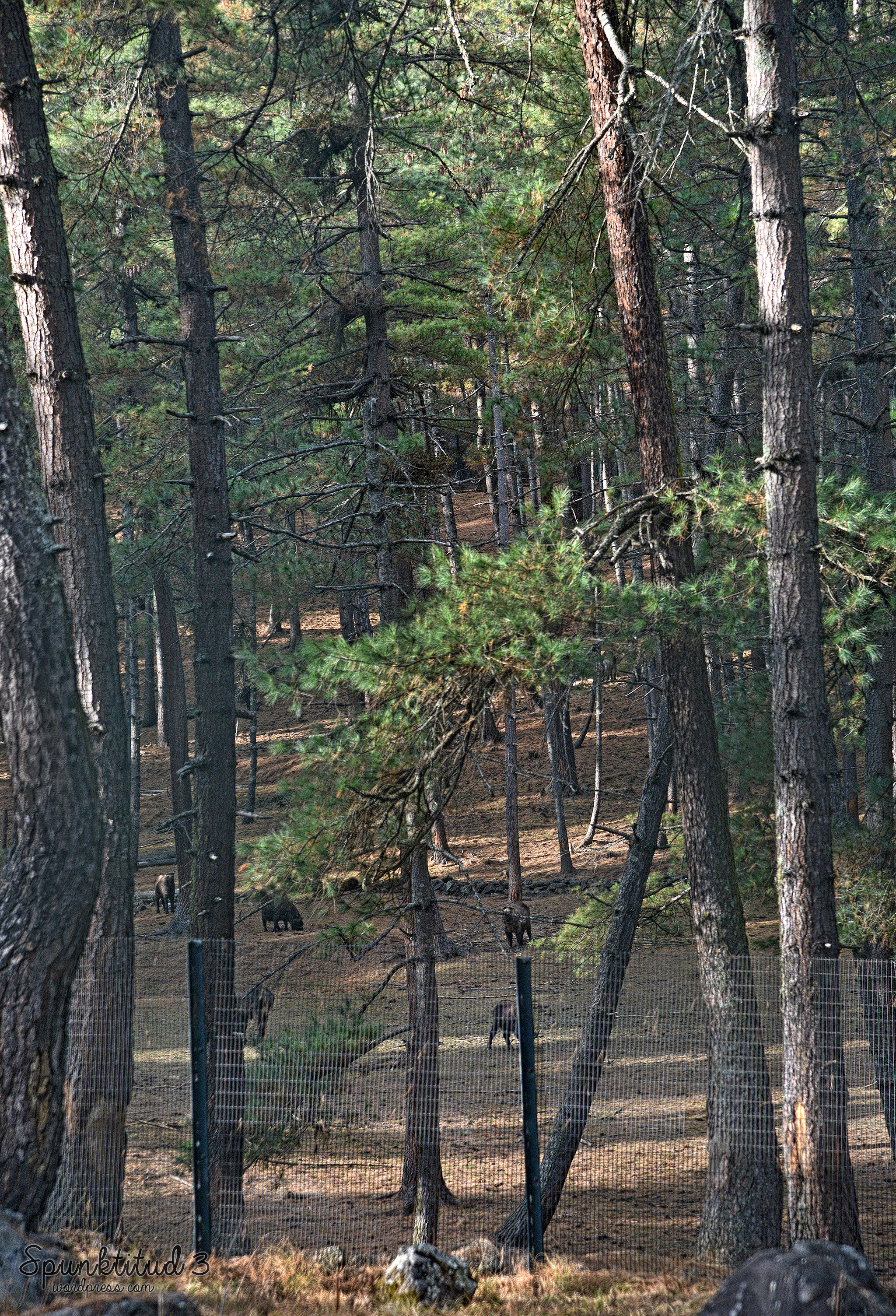 As I gazed into the far woods where the creatures were peacefully grazing, I was quite sure I would never know how they really looked like in real life. 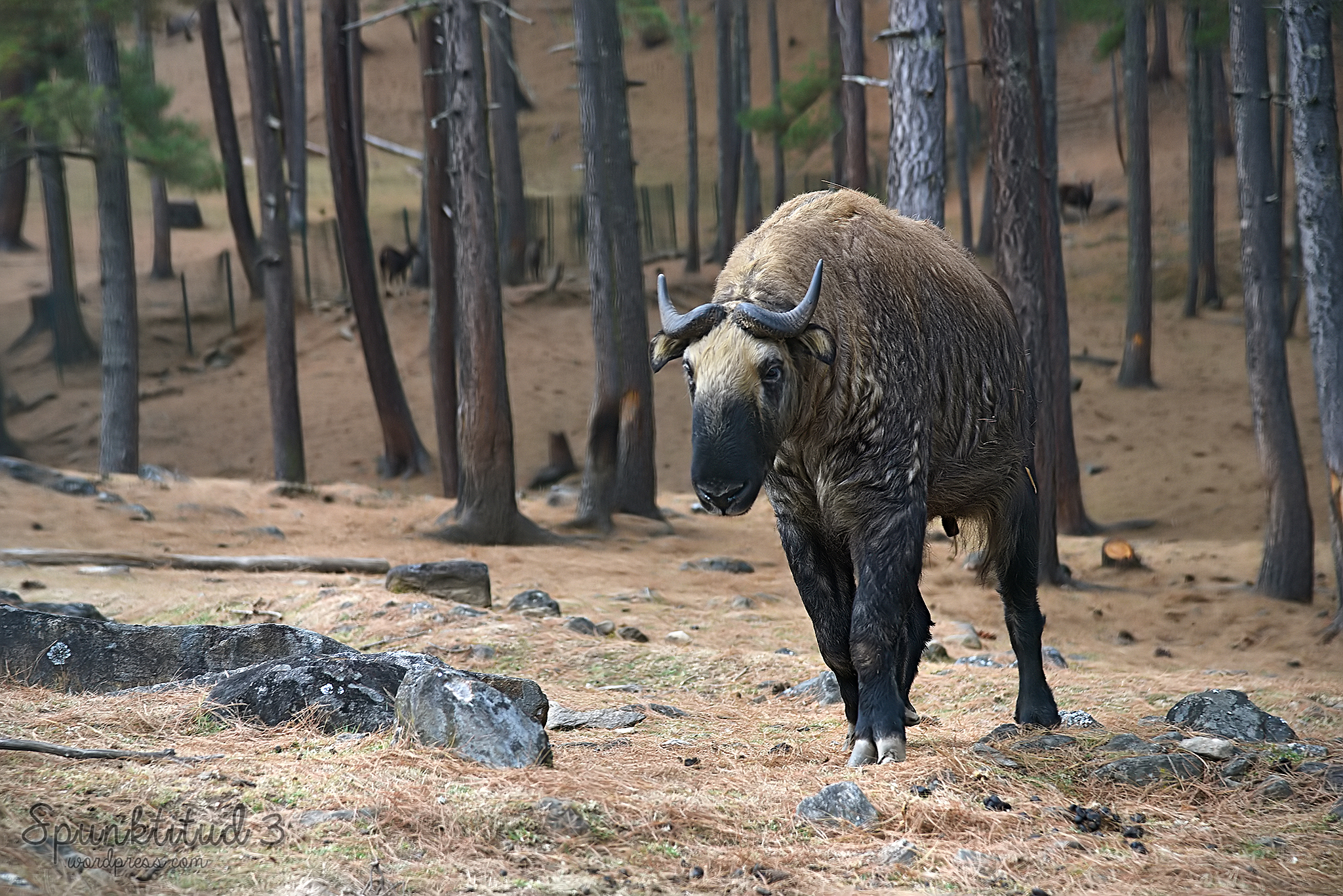 So you can imagine my uber excitement when a curious takin made its way down the woods and came near us. I could feel a tingle going down my spine! What an amazing creature, I had never seen anything like it before. My Bhutanese guide proudly told me, “Because it is so special, that’s why we name it as our national animal. It is unique just like Bhutan. ”

Folklore has it that a Tibetan saint by the name of Drukpa Kunley, popularly known as “The Divine Madman” was requested by the Bhutanese people to conjure a miracle before them during one of his religious lectures. The saint agreed to do so provided he was given a whole cow and a whole goat for lunch. After eating both the cow and goat (what a huge appetite!), the saint put the head of the goat on the skeleton of the cow and with a snap of his fingers, the animal sprang up and came to life. The animal was then given the name dong gyem tsey (takin). Since then this animal has been a common sight in the high hills of Bhutan. Because of this magical creation with highly religious association, the animal was named as the national animal of Bhutan on 25th November 1985. 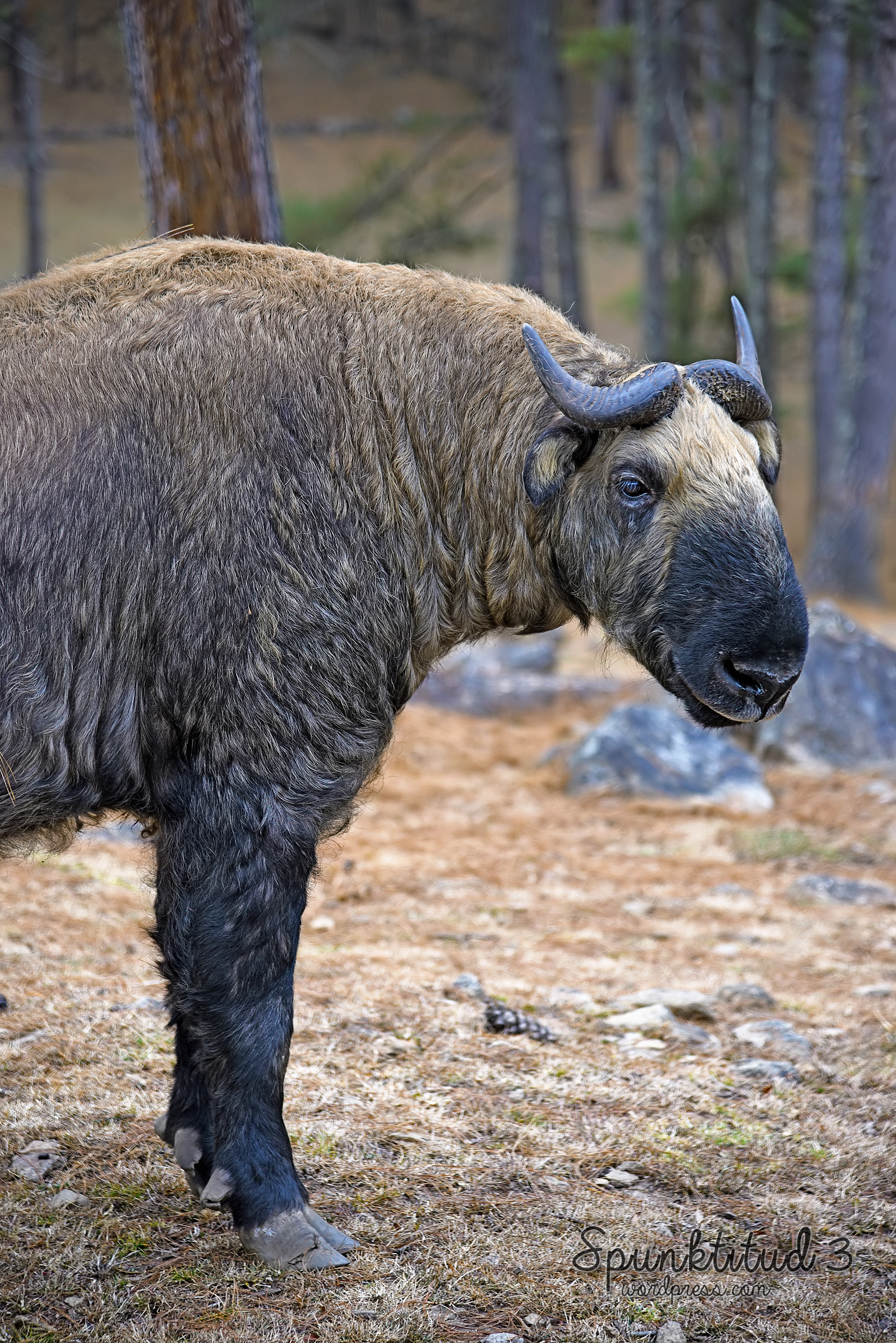 In a more realistic context, the takin (Budorcas taxicolor whitei), also called cattle chamois or gnu goat, is listed as a vulnerable species of goat-antelope native to Bhutan, India, China and Tibet. Adult takin have a golden yellow and brownish coat while calves are black in colour.

Takin are found from forested valleys to rocky, grass-covered alpine zones, at altitudes between 1,000 and 4,500 m above sea level. They are found in small family groups of around 20 individuals, although older males may lead more solitary existences. In the summer months, herds of up to 300 gather high on the mountain slopes. Salt is also an important part of their diet, and groups may stay at a mineral deposit for several days. So you may chance upon a herd of takin licking on rocks, taking in the salt found in the rocks. 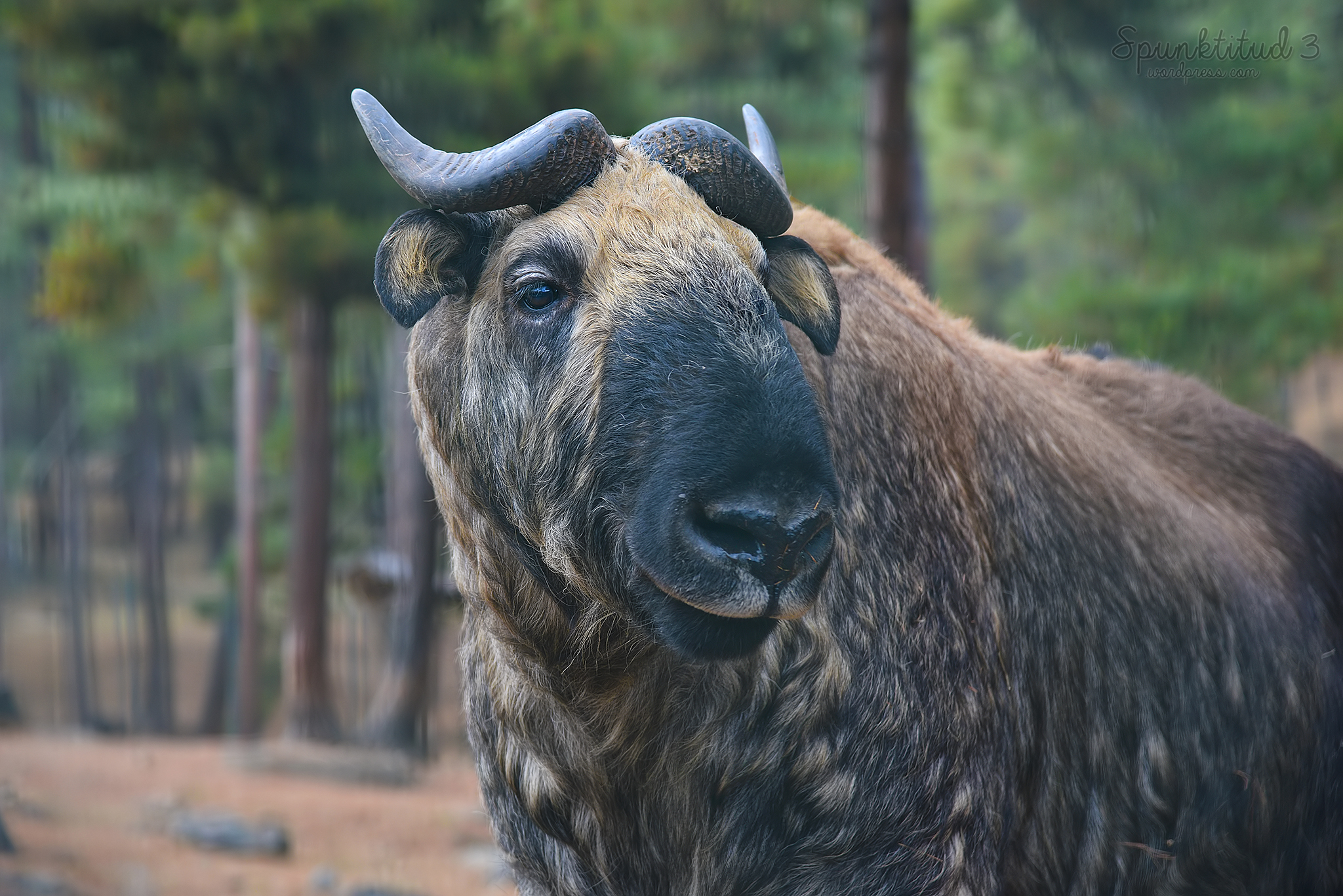 Rather than localised scent glands, the takin has an oily, strong-smelling substance secreted over the whole body which keeps them dry. This is likely the reason for the swollen appearance of its face (I must have takin genes too). Due to this feature, biologist George Schaller likened the takin to a “bee-stung moose” although research has found it to be more related to sheep, mehhh.

When in danger, the takin will give an alarm call that resembles a cough and the herd will retreat into thick bamboo thickets and lie on the ground for camouflage.

The only confirmed natural predator of takin is the snow leopard, and opportunistic Asiatic black bears and gray wolves. Humans pose a greater threat to the takin, although poaching is thankfully not common. 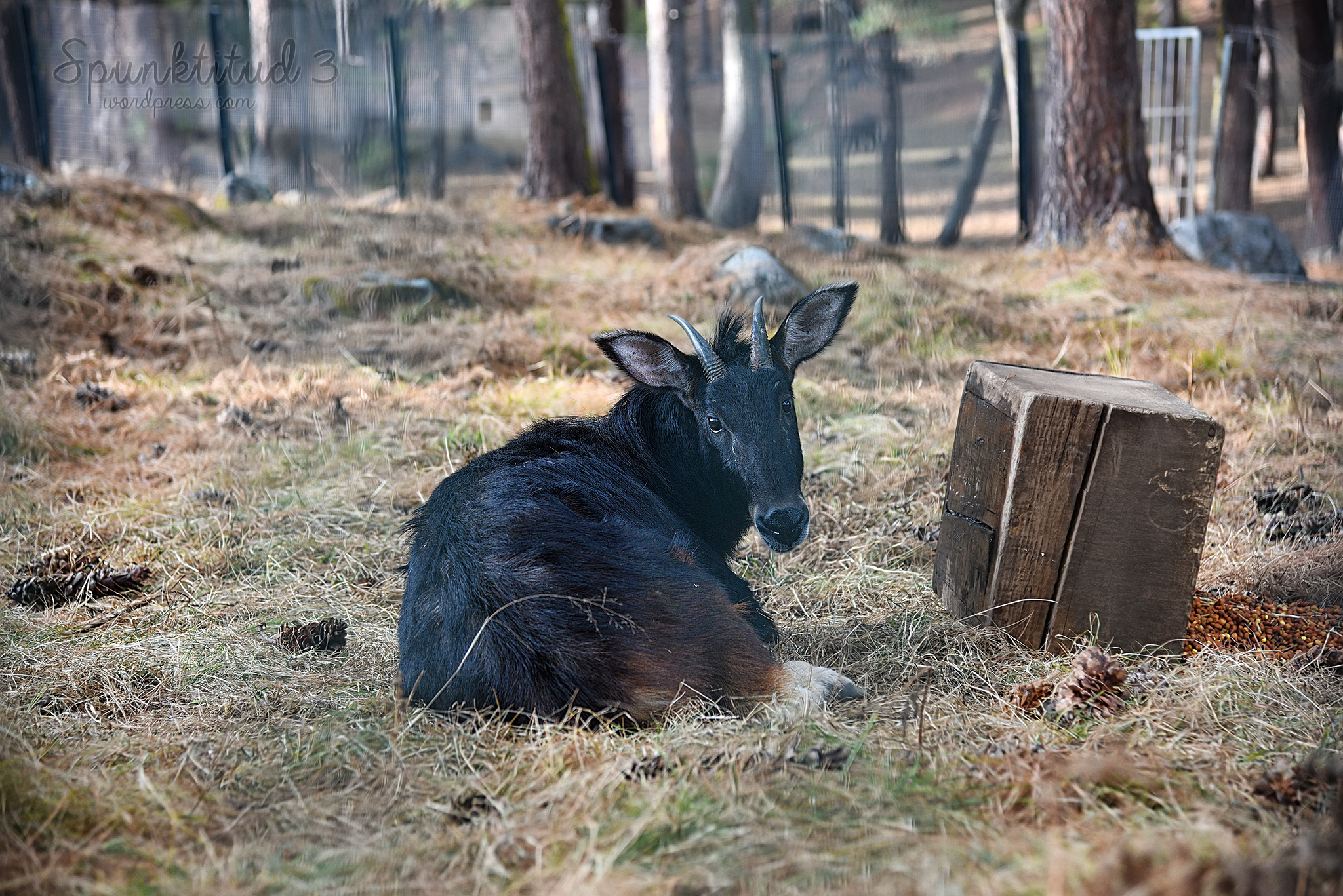 The preserve is also home to some sambar and barking deer. It takes only about 30mins to walk the small reserve, but it’s also the only place where you can see the takin (unless you are prepared to hike up the mountains and pray to catch sight of one). Coming face to face with the takin was a surreal experience especially when you hear of its mythical origin, so I would recommend dropping by the reserve for a visit.