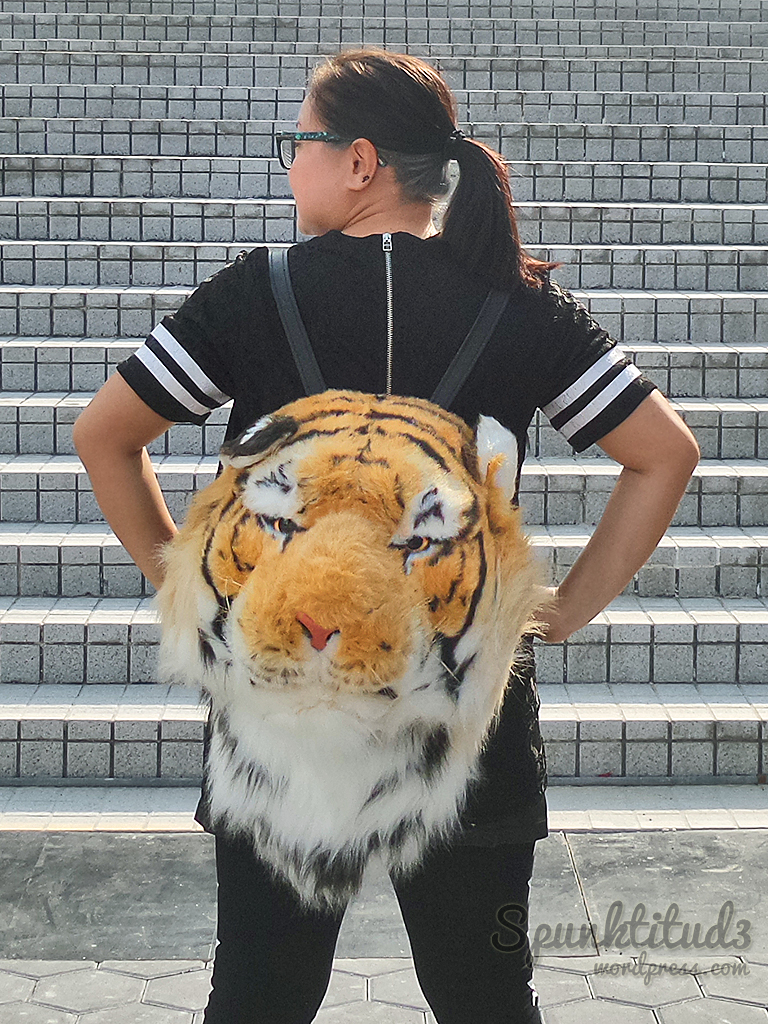 It was a day of seeing my fave kpop stars at the YG Family Galaxy World Tour, so I had to come in something swagalicious to support my most beloved of them all. No guesses who that would be ;) I must admit it took a bit of courage stepping out of the house, but once out I didn’t feel anything much except for some muffled whispers “tiger head, tiger head!” Yes it is, and it’s staring back at you. :) 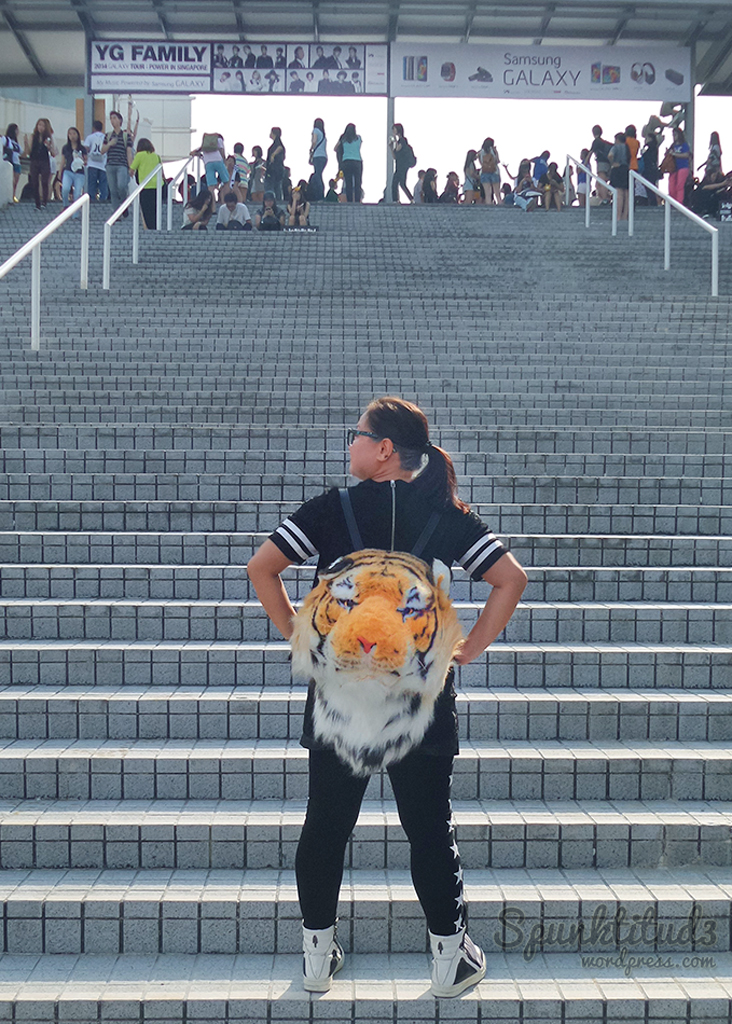 Caught G-Dragon at a music showcase during Fashion Week 2013. Although I just recently saw Big Bang during F1, I just couldn’t seem to get enough of him. So I happily shelled out $120 to listen to him sing 4 songs, and get pushed around like a star-struck teenager. I definitely wasn’t expecting the getting-pushed-around & queue-in-a-straight-line bits for what I paid, but looking on the bright side it made me feel young again :D

It was so darn difficult to take a photo, especially being vertically-challenged and squeezed together with teenage girls who couldn’t seem to stop jumping & screaming. I admire their energy level. And I hate the iPads blocking my view.

If there’s anything that can heat up the F1 night races like the thunderous noise of the race cars, it must be these four uber-cool guys from Kpop group Big Bang. And they are the reason why I am at my 5th F1 race in Singapore :D

Daesung working up the crowd. he doesn’t need to try too hard – they are already pretty excited. Some of them started queuing to get into the Fan zone from 10am that morning.

T.O.P looking suave. But honey, wrong outfit for F1 in Singapore – it’s damn hot. He did a sexy dance with Daesung later, and sent the crowd into a frenzy.

G-Dragon just needs to stand there, and he looks like a superstar already.

GD looks good even with a towel in his hand :)

Poor T.O.P. he looked so hot and was sweating like crazy. I can empathize with him since I was crushed within the boisterous crowd which at times felt like human radiators. Plus I had to hold my camera high up in the air to take photos, attempt tip-toes since I am vertically-challenged, and ended up with sore arms & sore legs the next day.

G-Dragon – Oh fantastic, baby!
In the world of Kpop where plastic dollies and flower boys predominate, there are a select few who exude their own cool factor and sing or dance well. One of them has to be G-Dragon, the leader and producer of one of Korea’s hottest groups BIG BANG (sccccream!). And one of the rare few who could make me part money for a top-tier concert ticket.

The cool dude was trained for showbiz from the age of 13, and has grown to be a key person in the Kpop music scene, writing and producing the bulk of BIG BANG’s hit songs.

Oh so cool – I want his outfit
It’s also no wonder whatever he wears is always sold out – instantly. Maybe I should ask him to wear a potato sack and see what happens.

One of a Kind is G-Dragon’s second solo concert tour and first worldwide tour. The tour consists of 26 show in 8 countries and 13 cities, kicking off on 30 March 2013 at the Olympic Gymnastics Arena in Seoul, South Korea.

G-Dragon & CL of 2NE1 whipping up a duet. Both are fantastic rappers.

He can take it slow too with a ballad

After a number of Kpop concerts, I have realised Koreans like to sing sitting down, lying down…and the fans scream when they get down.

Check out his dragon mic stand!

This dude is clearly born for the stage, looking so at home and wowing the audience with his effortless gait.

2NE1 was the guest performers for his Singapore leg – my fave girl group! woohoo!

The girls certainly look like they are having fun :)

Dara looks so cute! I am eyeing her Balenciaga booties…

Oh my gawd! Their signature pose

First time I see a sports jersey – in mink

G-Dragon – you’re definitely One of a Kind! I can’t wait to see you again! 친차대박!

2NE1 as special guests
I am the Best+I Love You

The day to see BIGBANG Alive Galaxy Tour finally arrived! I was particularly excited to watch the dynamic K-pop group in person as they seemed to be one of the hottest K-pop acts around and moreover, their fashion sense is as funky as it can get – which is so cool! Furthermore, these boys can really sing, dance and produce their own songs, unlike the ubiquitous Korean ‘plastic dolls’ that look good, act cute and sound like silicone. Ewww.

Ooh, the anticipation is building up as I entered the concert venue. I’m going into galaxy!

I went on the second day of the two-day concert on 29 September 2012. The concert started at 7pm which I thought it was early compared to the usual 8pm starting time. That said, I heard that fans started queuing up a day before outside the stadium to secure the best moshpit spots. I think I was pretty comfy with my tiered seating accompanied with my zoom lens – still can see well! And it was a night I thought I saw stars in the galaxy – five very colourful stars made up of G-Dragon (I wanna share wardrobe with you!), Taeyang (You made my nose bleed the whole night!), T.O.P (Your voice blew me away!), Daesung (I love whatever you do!) and Seungri (You are so full of crap, haha!).

Fans queuing up to buy official fan merchandise before the start of the concert. I heard the Samsung booth were giving away free hair extensions and photo prints too.

This being the group’s (who won Best Worldwide Act – MTV Europe Music Awards 2011) first-ever world tour, and Singapore being the first stop in the South-east Asian leg, I have a feeling the boys were just about as excited as their fans. They belted out over 20 of their songs from their six-year discography, and seemed reluctant to leave after the concert ended, basking in the limelight and fan adoration. The boys, especially Taeyang and G-Dragon, were made for the stage. And if you thought their concert vaguely reminded you of Lady Gaga’s, well you are right – it is produced by Live Nation, with Lady Gaga Monster Ball choreographer Laurieann Gibson as creative director.

BIGBANG continues on their world tour to Bangkok, Jakarta, Taipei, Manila, Kuala Lumpur and Hong Kong. They will also perform in Los Angeles, New Jersey, Peru, Brazil and London. Here’s wishing them an astronomically successful world tour with more concerts to come. Come back to Singapore soon! We love you!

A sea of lighted yellow crowns await the start of the concert. Once the giant white curtain dropped, screams pierced through the ceiling. And I went momentarily deaf.

As soon as the giant curtain dropped, BIGBANG appeared in five space capsules amidst fire pyrotechnics and started the night with their 2011 EP title son “Tonight”.

Wowing the fans with nifty moves

The more sedate duo Seungri and Daesung. These two are more similar to earthlings.

G-Dragon the leader with a wardrobe to die for. I want everything he wears.

T.O.P. performed in a heavily bandaged hand. He injured his hand while filming K-drama ‘Alumnus’. Awww so poor thing. He garnered the most screams everytime he sang. I must say he looked pretty charming. *swoon*

The livewire lives up to his name Taeyang = sun. Love his glittering Loubies sneakers!

The ever-friendly Daesung. I fell in love with him when I first saw him in K-drama What’s Up – his vocals are so powerful. I find his blockhead persona super cute.

Seungri, Taeyang and Daesung chatting. It was a pity they were not as good in English, cos’ the chat seemed painfully rehearsed around key English words like “Merlion”, “Marina Bay”, “Chili crab” and “Pepper crab”. It was kinda funny when Daesung said Merlion was his best friend on Facebook, and Merlion uses a Samsung Galaxy S3. Looks like Samsung got the right brand ambassadors who knew how to promote its products! LOL

T.O.P. and G-Dragon team up for a song. I thought they looked pretty cool sitting up there.

G-Dragon can sing, and in ANY sort of position – even lying down. That’s a treadmill by the way, so it was really cool to see him moving along the stage while lying there.

The many poses of G-Dragon

Seungri morphs into a Secret Agent for his solo performance

Here’s a song for you:

I think T.O.P. is trying to hide his charm behind those geeky glasses. Look at the poor guy’s bandaged hand. It must have hurt a lot…

What’s a pink dinosaur doing at the concert?!

Taeyang sends the girls into a frenzy when he tore up his shirt to expose his upper torso. Oh Adonis, you make me drool!

Daesung getting teased about his leather body harness by the boys. T.O.P. tried to take the leather ‘bra’  off a giggling Daesung. Great to see the boys enjoying themselves.

I took the most photos of Taeyang that night, cos’ the guy really knows how to pose.

Seungri doing a Gangnam-style dance. He was full of crap that night!

Someone threw a panda toy up, and Seungri happily played mummy to it.

This guy obviously doesn’t like to wear clothes. He took off his top at least three times that night. If I fainted from dehydration, I would send him my medical bill, cos’ he made me drool all night! I love a guy with a cross, so sexy…

G-Dragon loves the treadmill, lying down on it again.

Daesung takes a sip of water, and splashes it towards a screaming audience.

Awww…the concert came to an end after two hours.

Everyone took a photo to remember the evening by…this dude probably felt on top of the world after seeing his idols!

Fuchsia haversack with wings. G-Dragon would have been proud!

Thank you Samsung, for sponsoring BIGBANG and bringing them to Singapore! If martians looked that good, I am migrating to outer space!