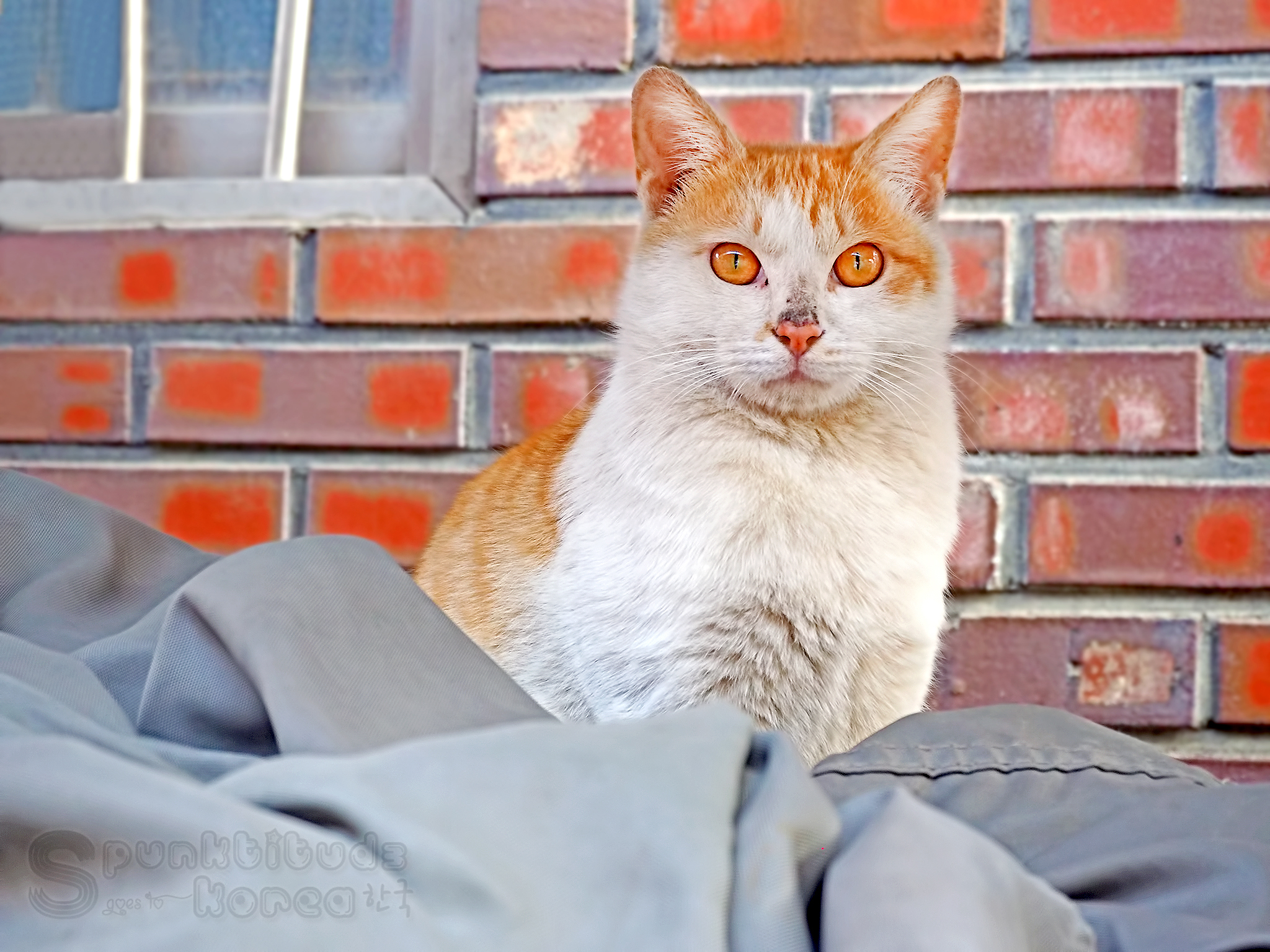 With that intense gaze, this kitty could be the feline version of Steve McCurry’s Afghan girl. In actuality, she was wary of foreign intrusion in the form of a nosy visitor (me). All rightey kitty, the alley is yours. 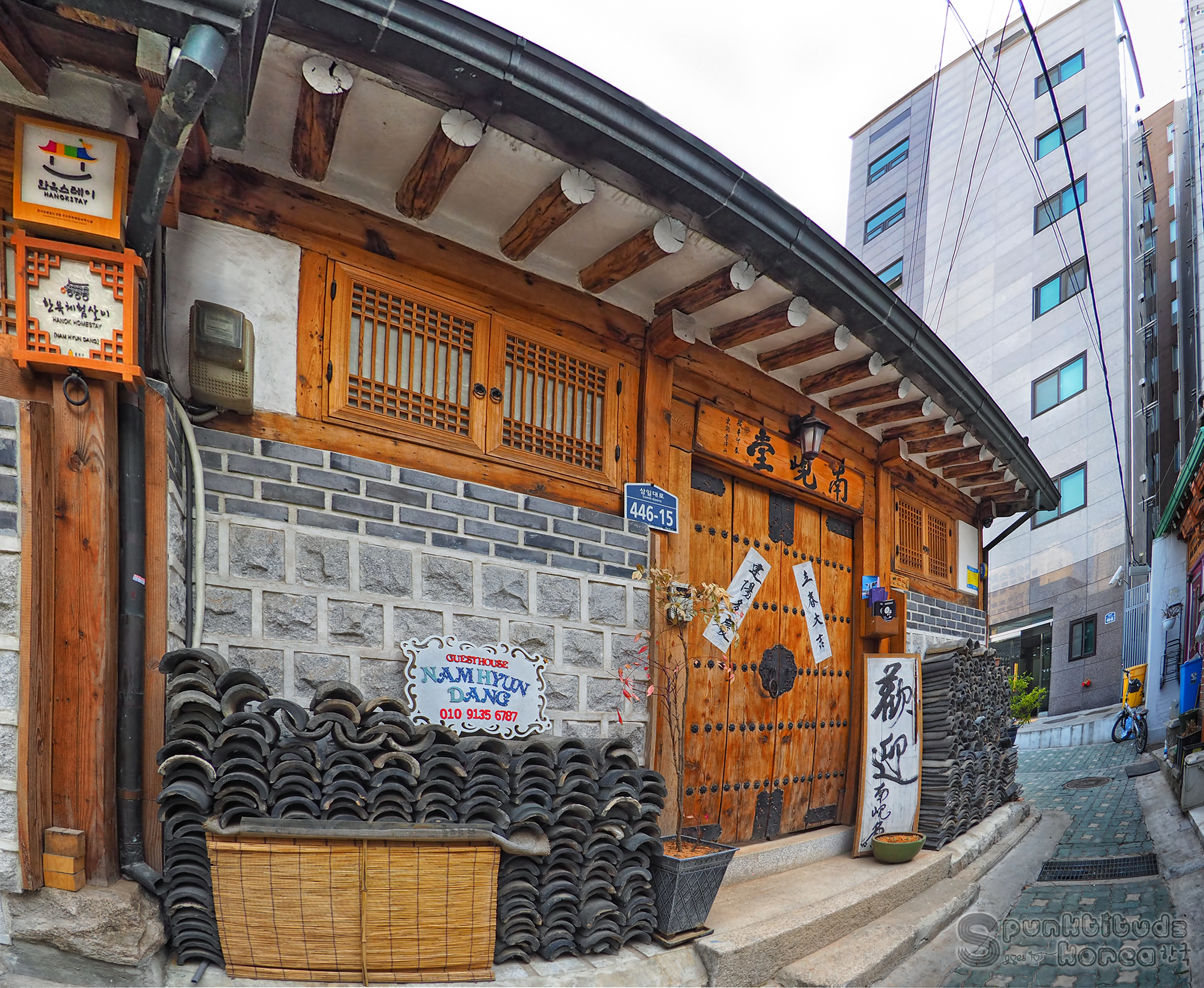 One of the best ways to experience a foreign culture is to live and eat like a local. On my first trip to Korea, I chose to ditch the modern hotel room to stay in a traditional Korean ‘hanok’ in Seoul. Referred to as living museums, hanoks contain in their layout and structure the history of ancient Korean architecture and society, and the warm hospitality of a Korean family that I experienced at Namhyundang. 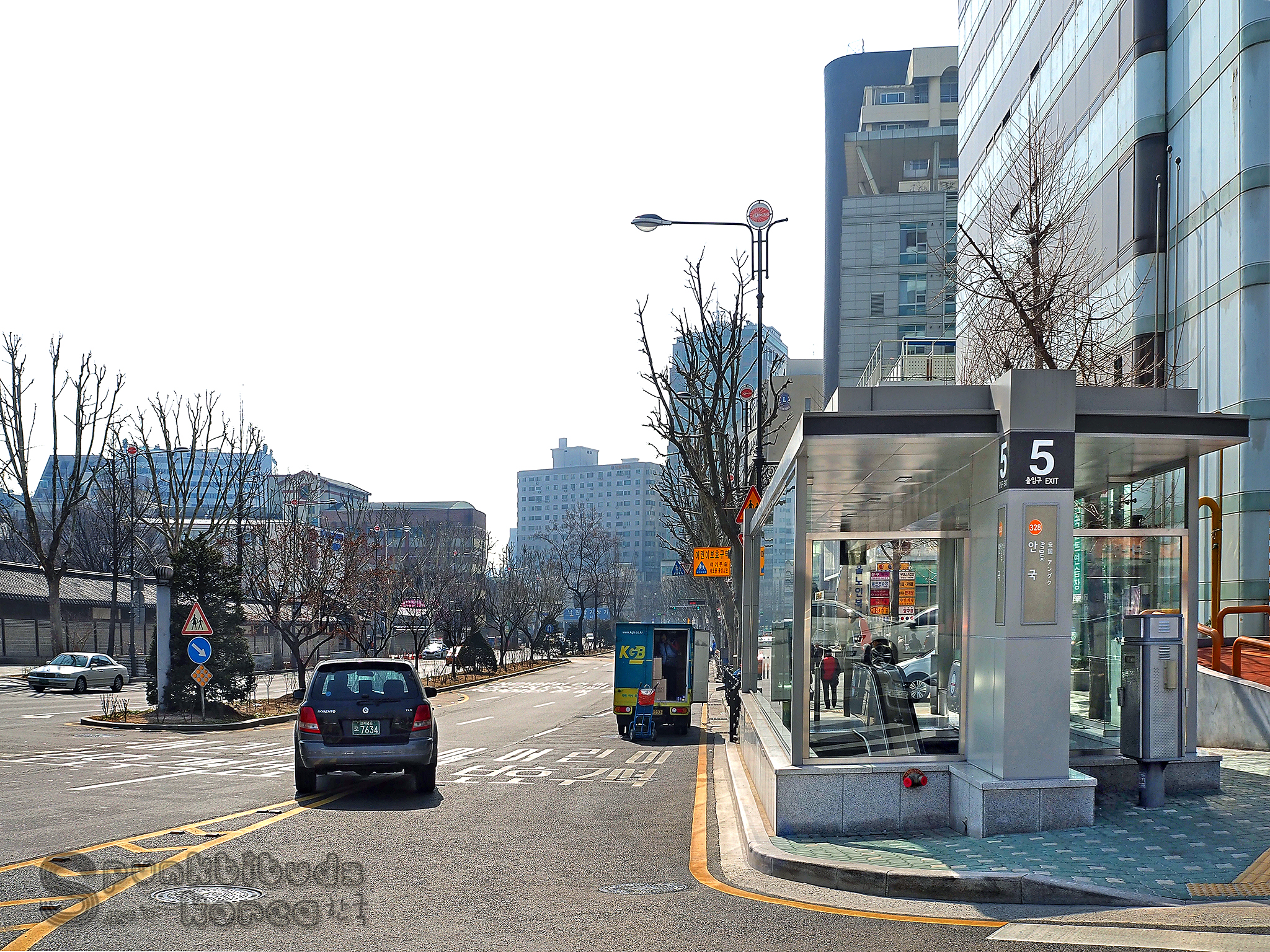 Hanoks are gaining in popularity both as day-trip photo-ops or actual accommodation. Usually located near cultural attractions, traditional hanoks are great places to stay if you are planning to visit the palaces or museums. Namhyundang is located in the Anguk area near Exit 5 of Anguk train station. 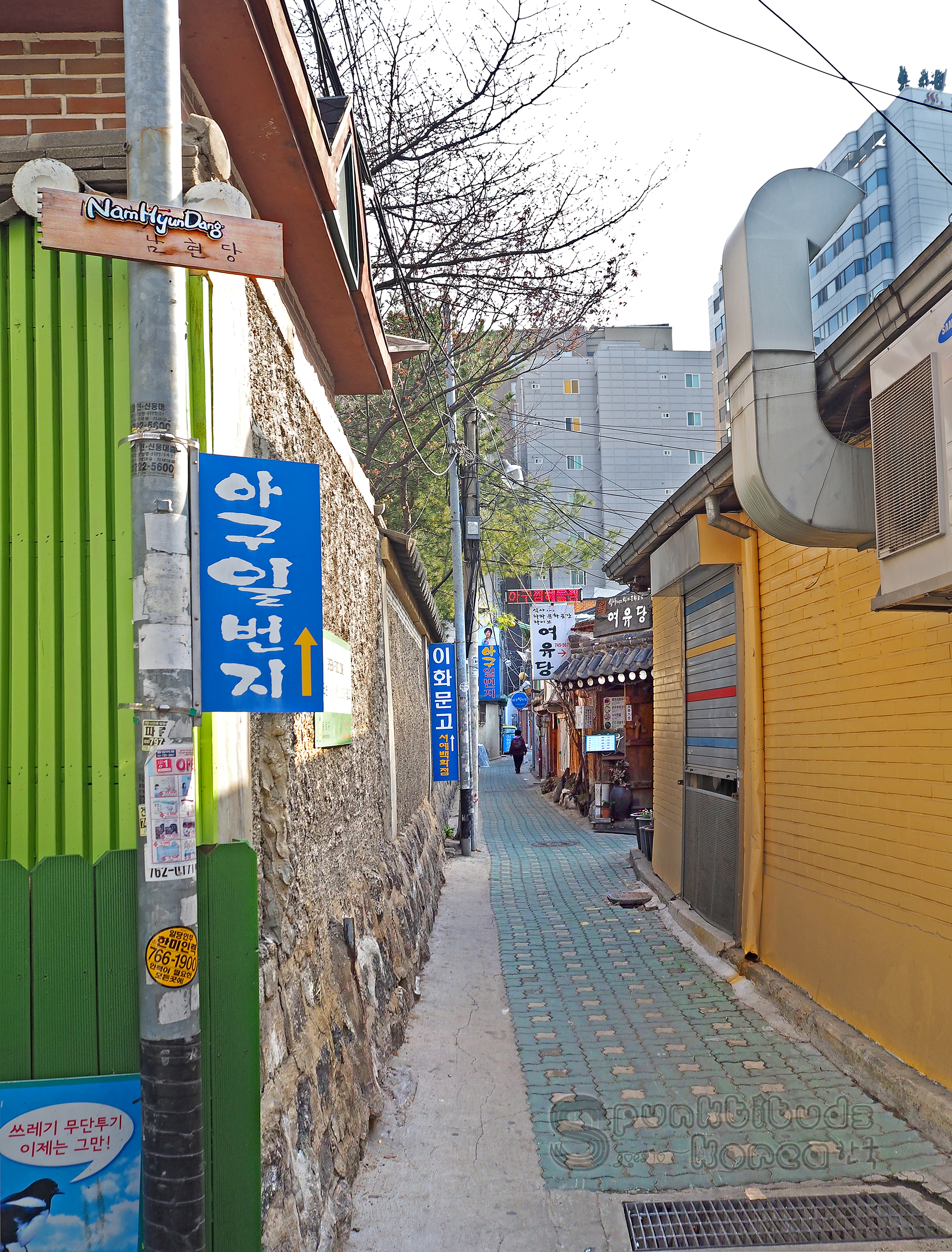 Tucked away in a quiet alley of the neighborhood of Gyeongun-dong just beside Kyodong Elementary School, Namhyundang is well-placed for an exploration of traditional Korean culture – it’s a mere 10 minutes’ walk from the neighbourhood of Insadong (the very heart of traditional Korean culture) and close to several palaces and shrines including the main Gyeongbuk-gung and Changdeok-gung, Unhyeongung (which Namhyundang was named after) and Cheondogyo Temple. Food is aplenty, and 경동시장 Kyungdong Market is also nearby. 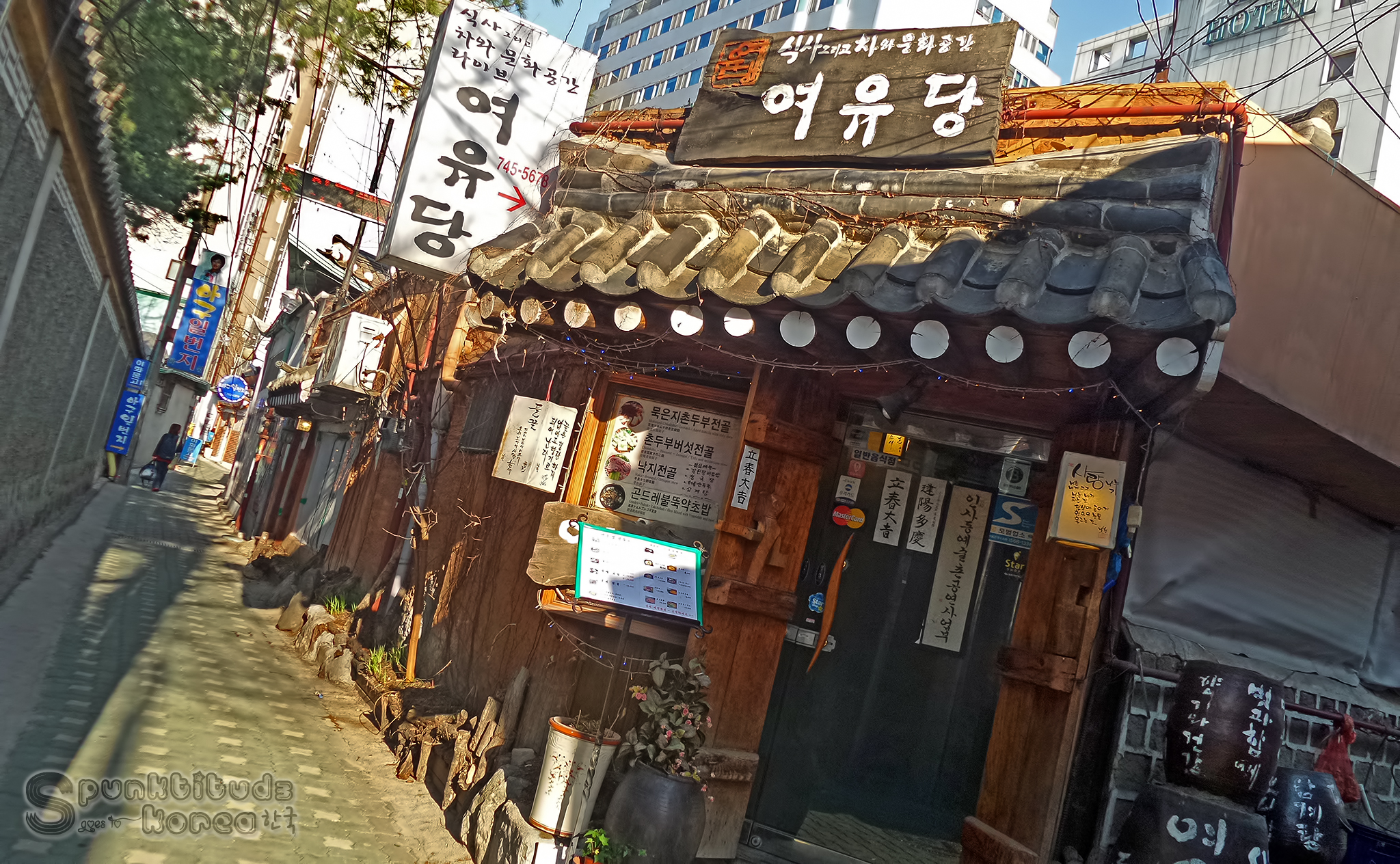 There are two Korean restaurants conveniently located along the same alley as Namhyundang, so no worries about satisfying hunger pangs. 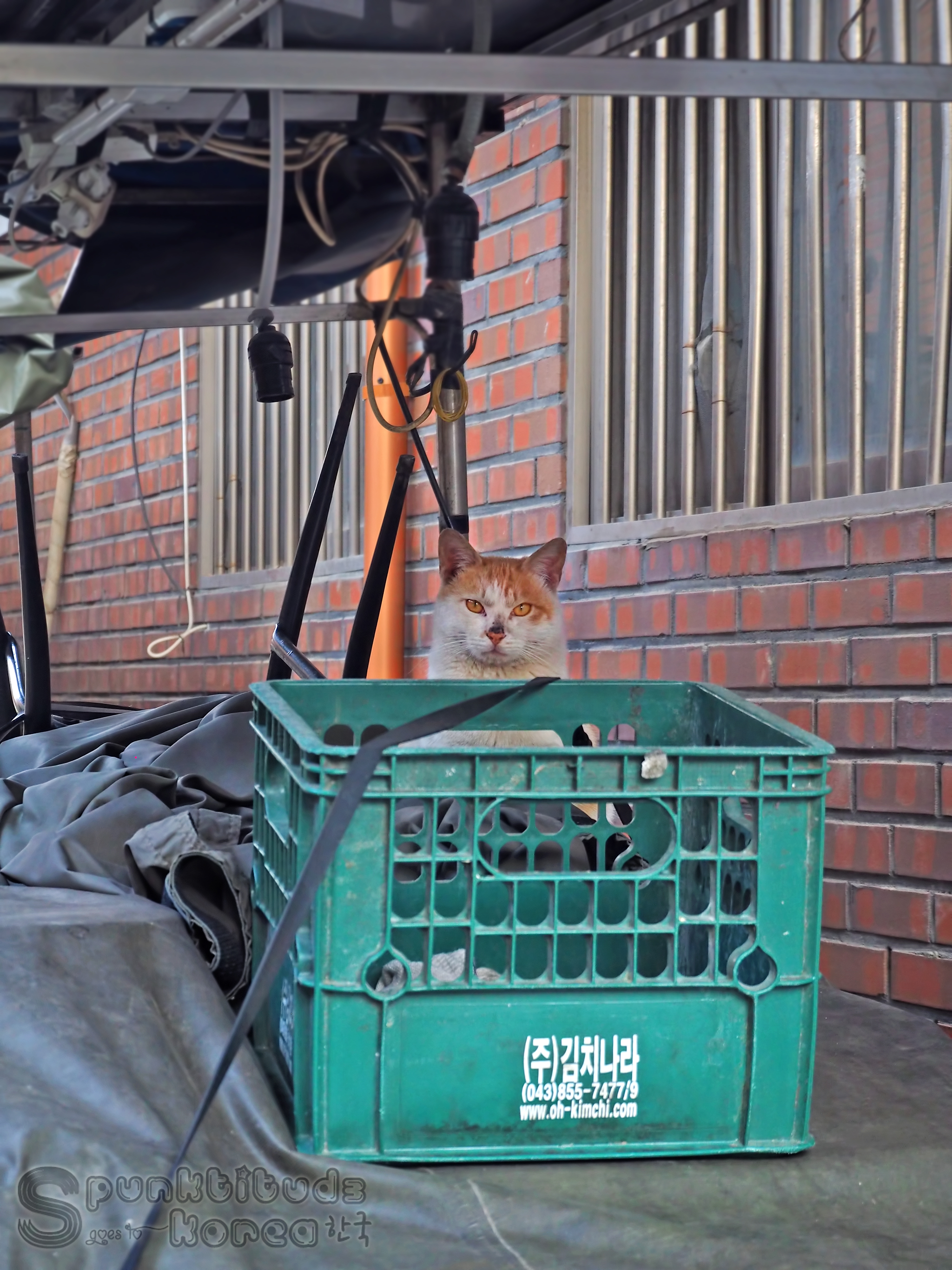 We met a dour-faced kitty on the way…oopsie, sorry to disturb your nap :p 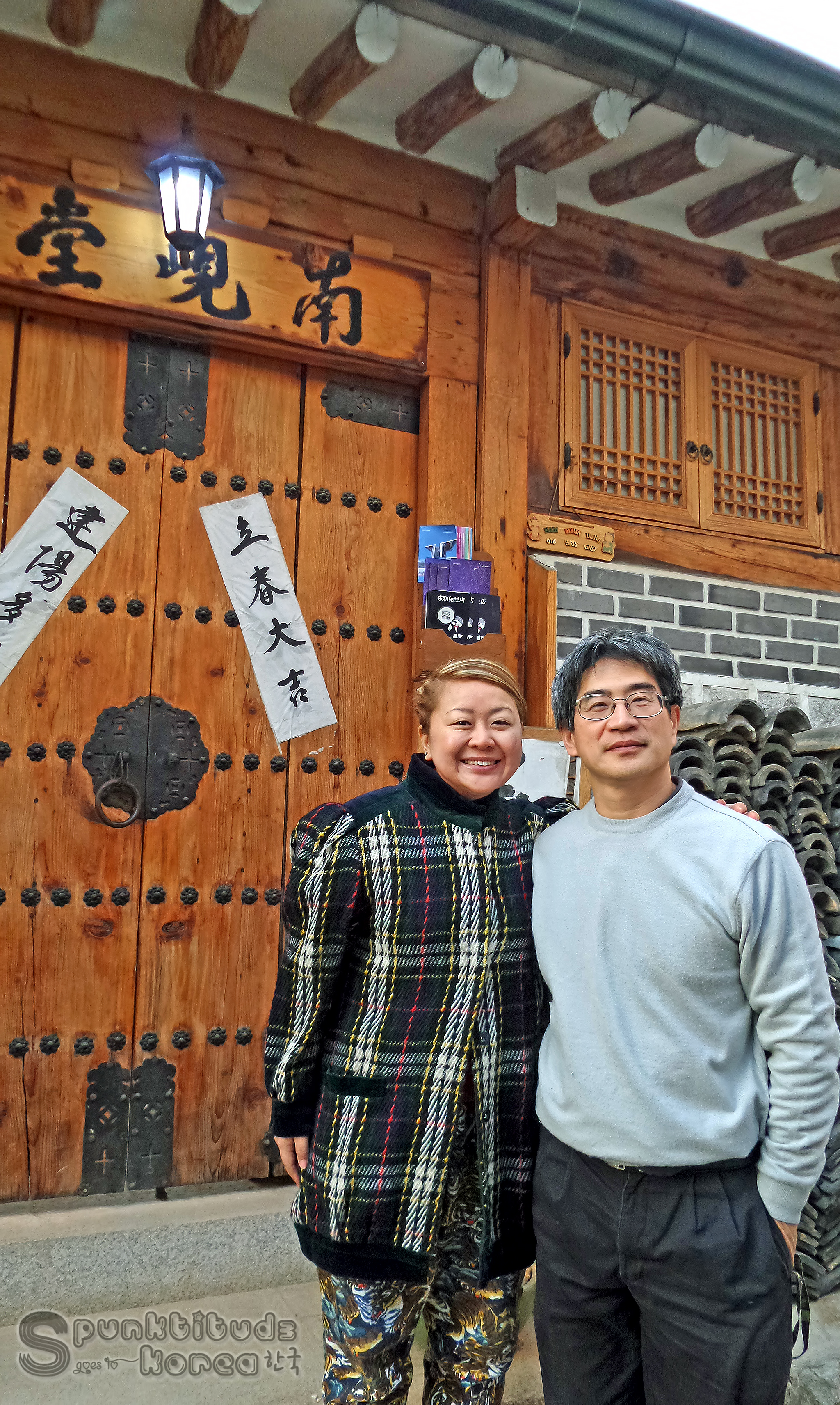 Namhyundang’s owner Mr Lee Sang-Am welcomed us warmly. He took the effort to chat with us so as to get to know his guests better, and shared with us a bit more about the history of the hanok we will be staying in. We were relieved that he speaks good English and understands Chinese and German (he even taught me how to pronounce my name in Korean!). 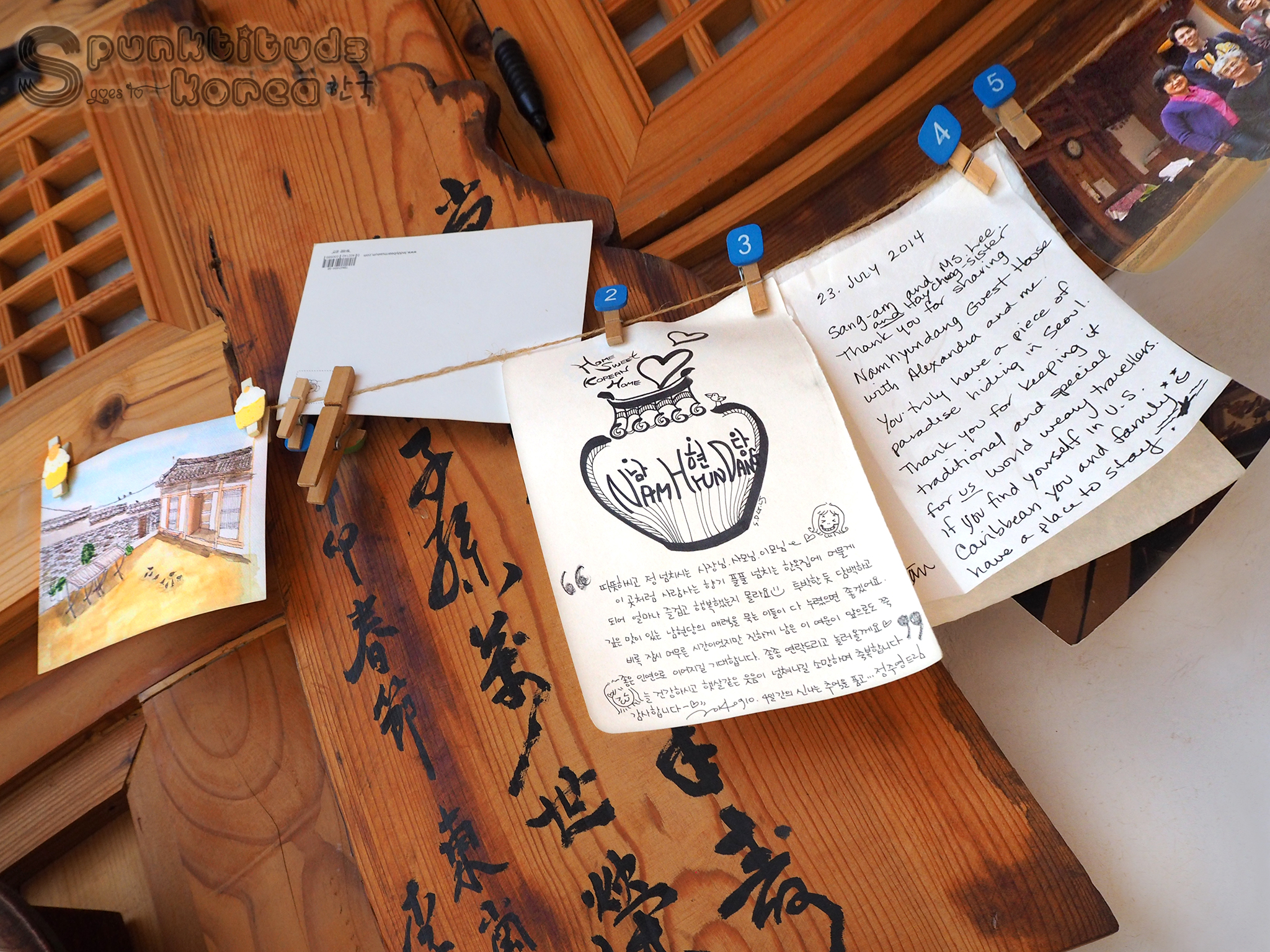 Look at all the lovely messages sent by his previous guests! 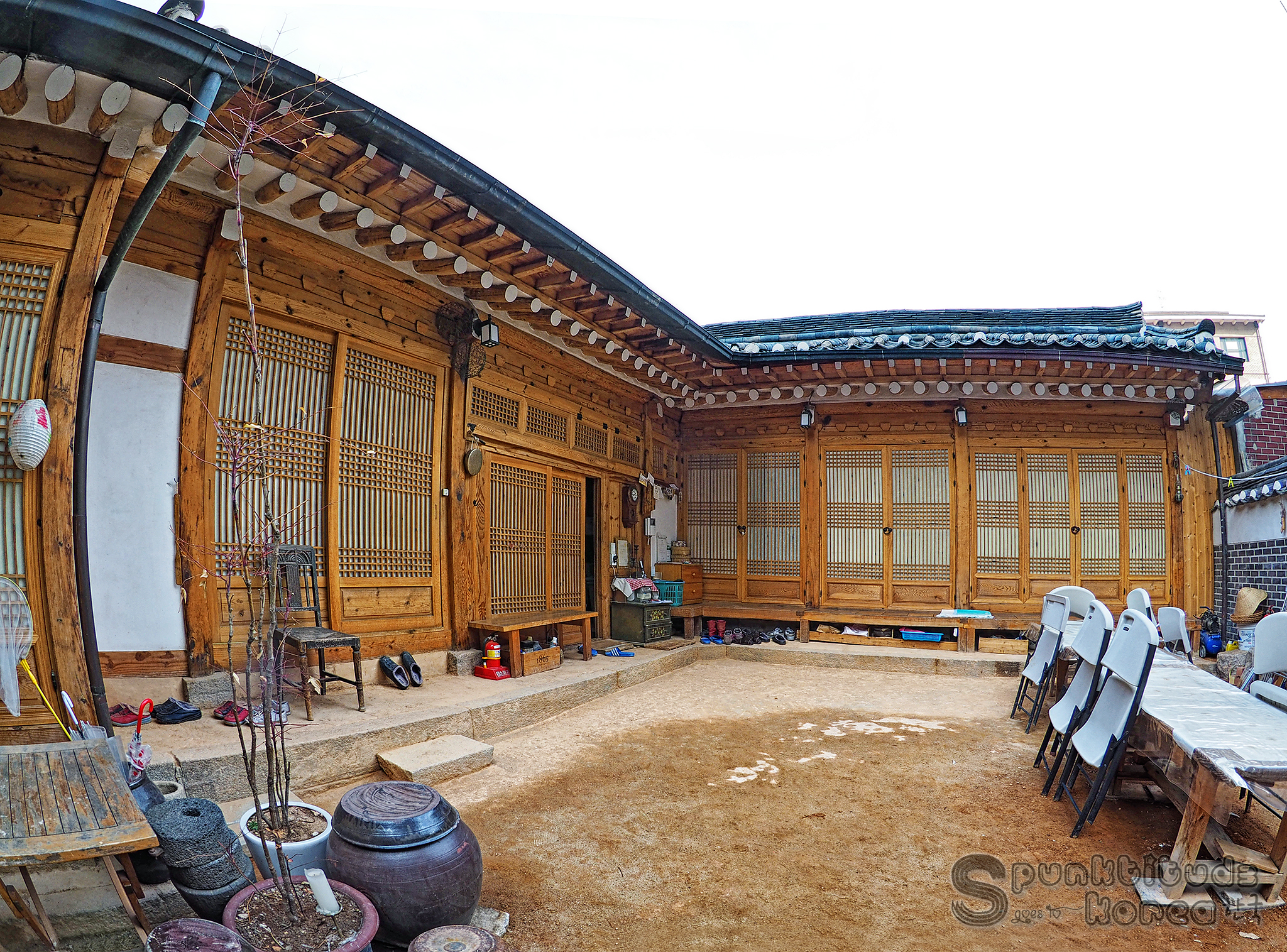 A typical hanok is characterized by wooden pillars, mud walls, paper-pasted windows, a daecheongmaru (wooden floor) for temperature control during different seasons, and a courtyard/garden. Namhyundang is a typical hanok built over a hundred years ago, and recently renovated in 2011 into a traditional homestay. Guests can choose from the 5 rooms available (yes, only 5 so book early). 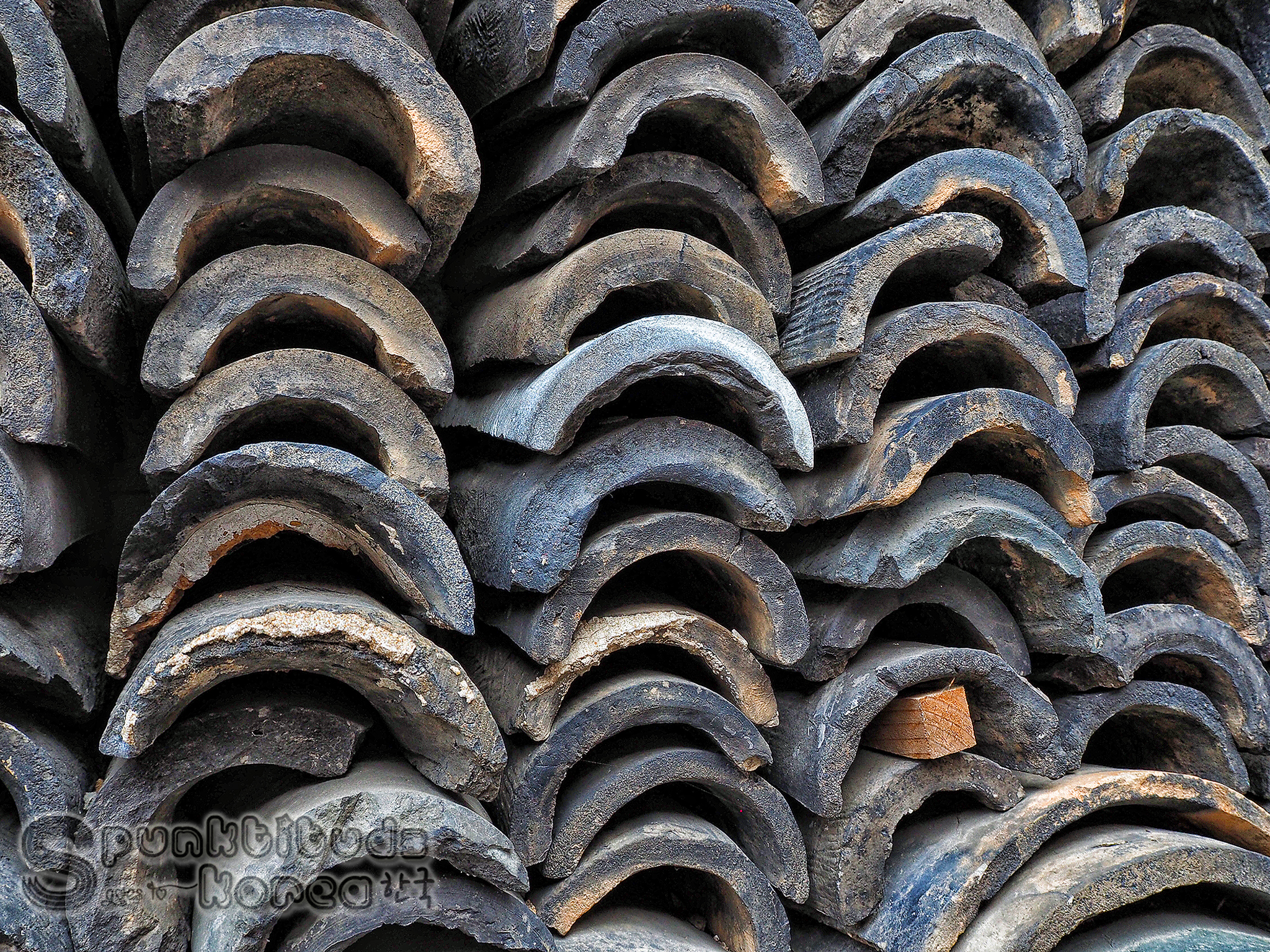 Traditionally, only nobles (yangban) were allowed to use clay tiles for their roofs, while the rest of the population had to make do with thatch. 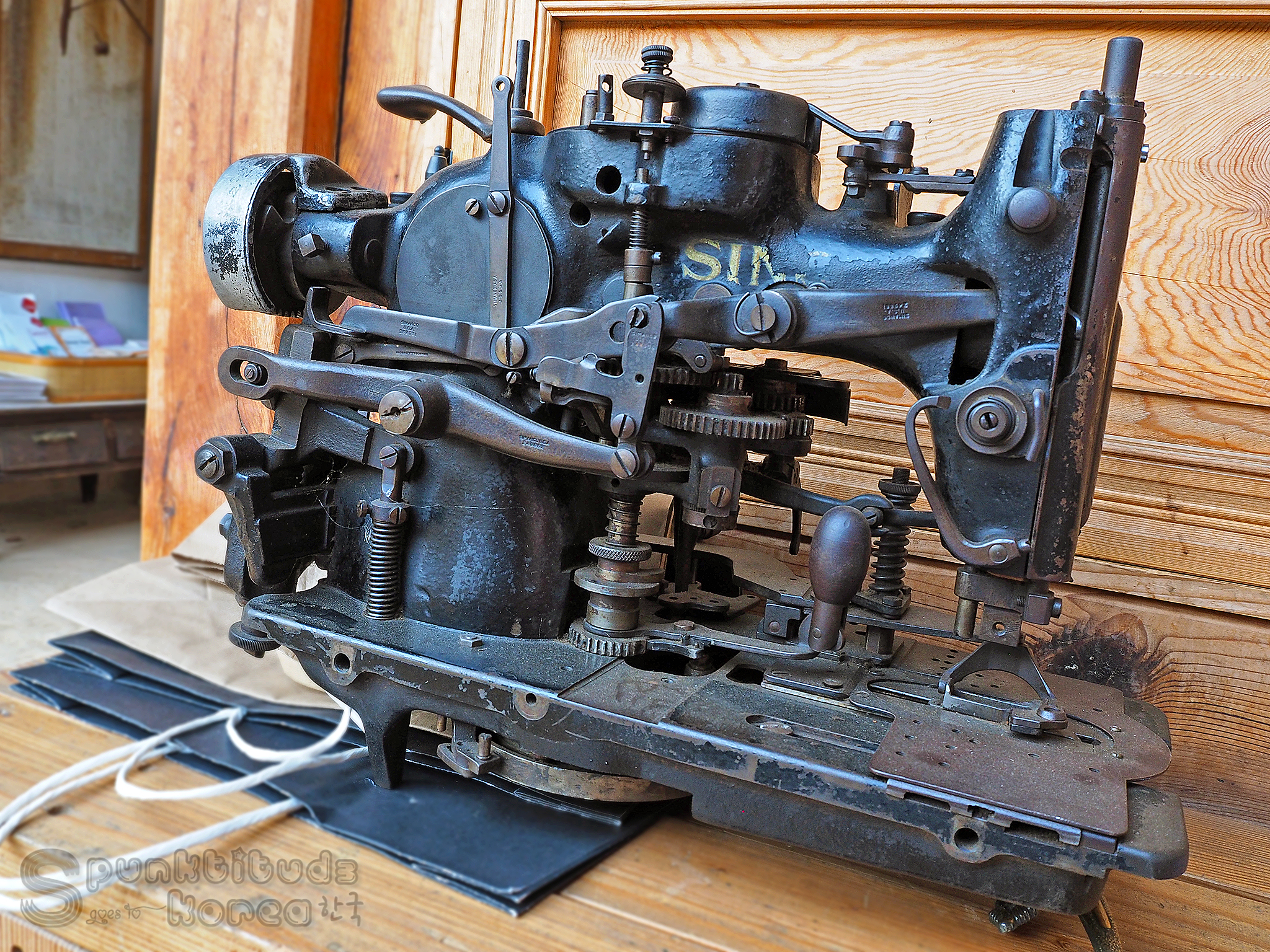 What a cool-looking sewing machine! 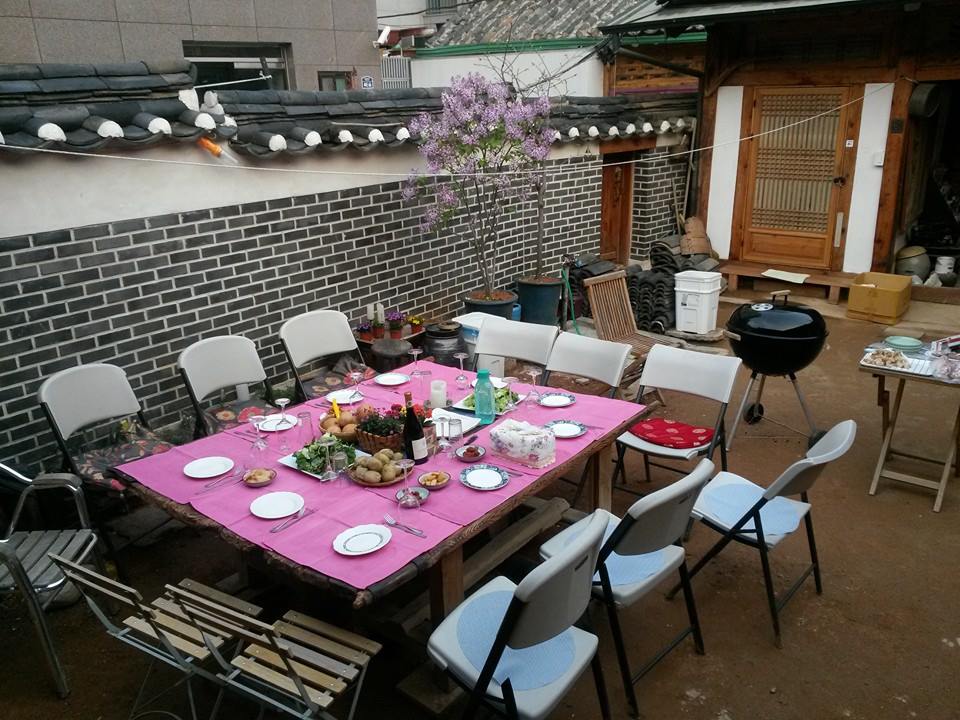 The homestay is suitable for all types of travellers from single travellers to small families. The courtyard can be used for a cosy family meal. (Photo from Namhyundang) 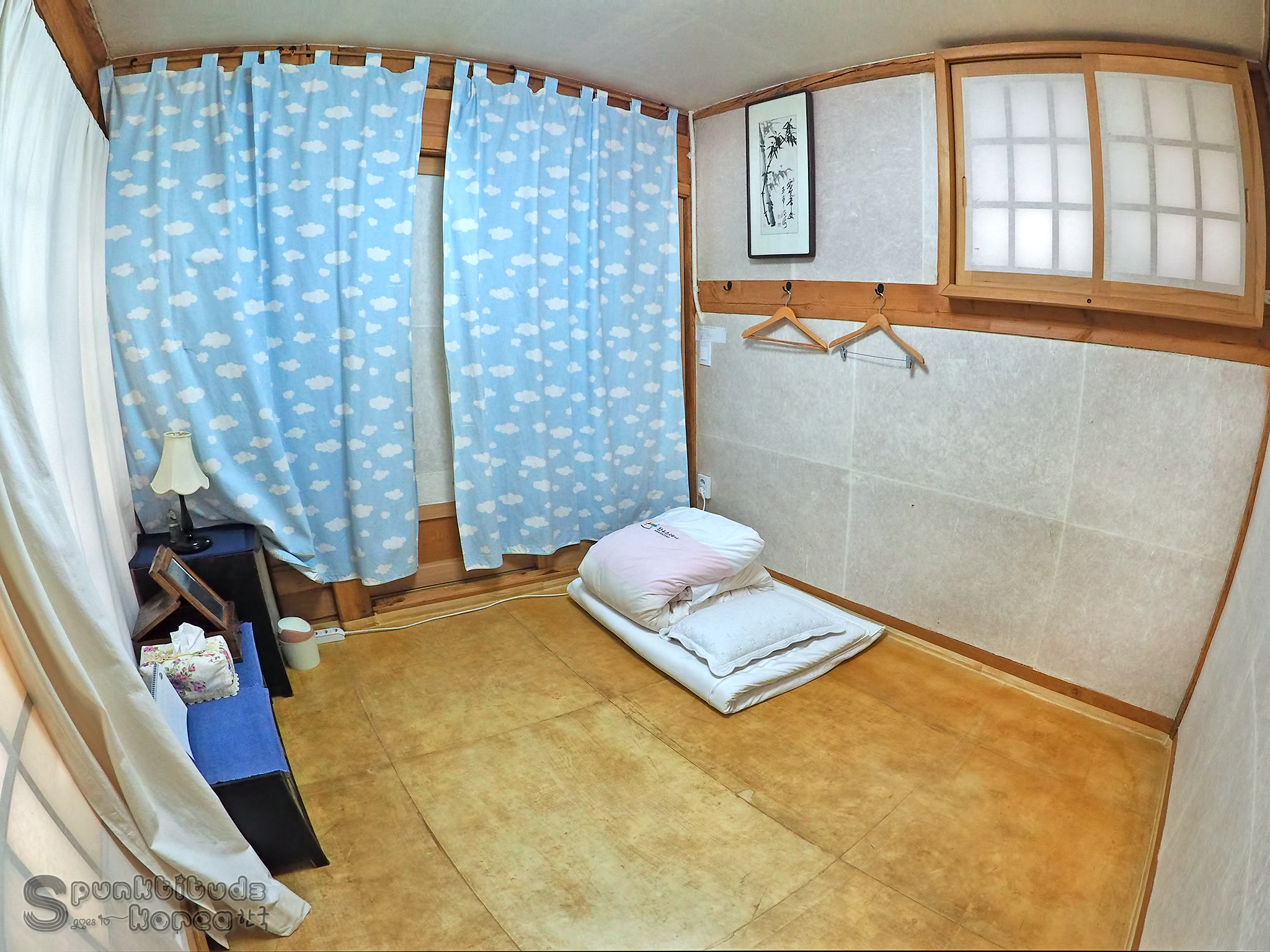 Here’s what a typical hanok room looks like. My first thoughts were – where’s the cupboard and TV? LOL. It was quite amazing how our Korean ancestors managed to live so simply, and it made me think what I have been taking for granted. Thankfully, modern ‘necessities’ such as electrical sockets, air-conditioning and wifi have been added for the convenience of today’s guests. 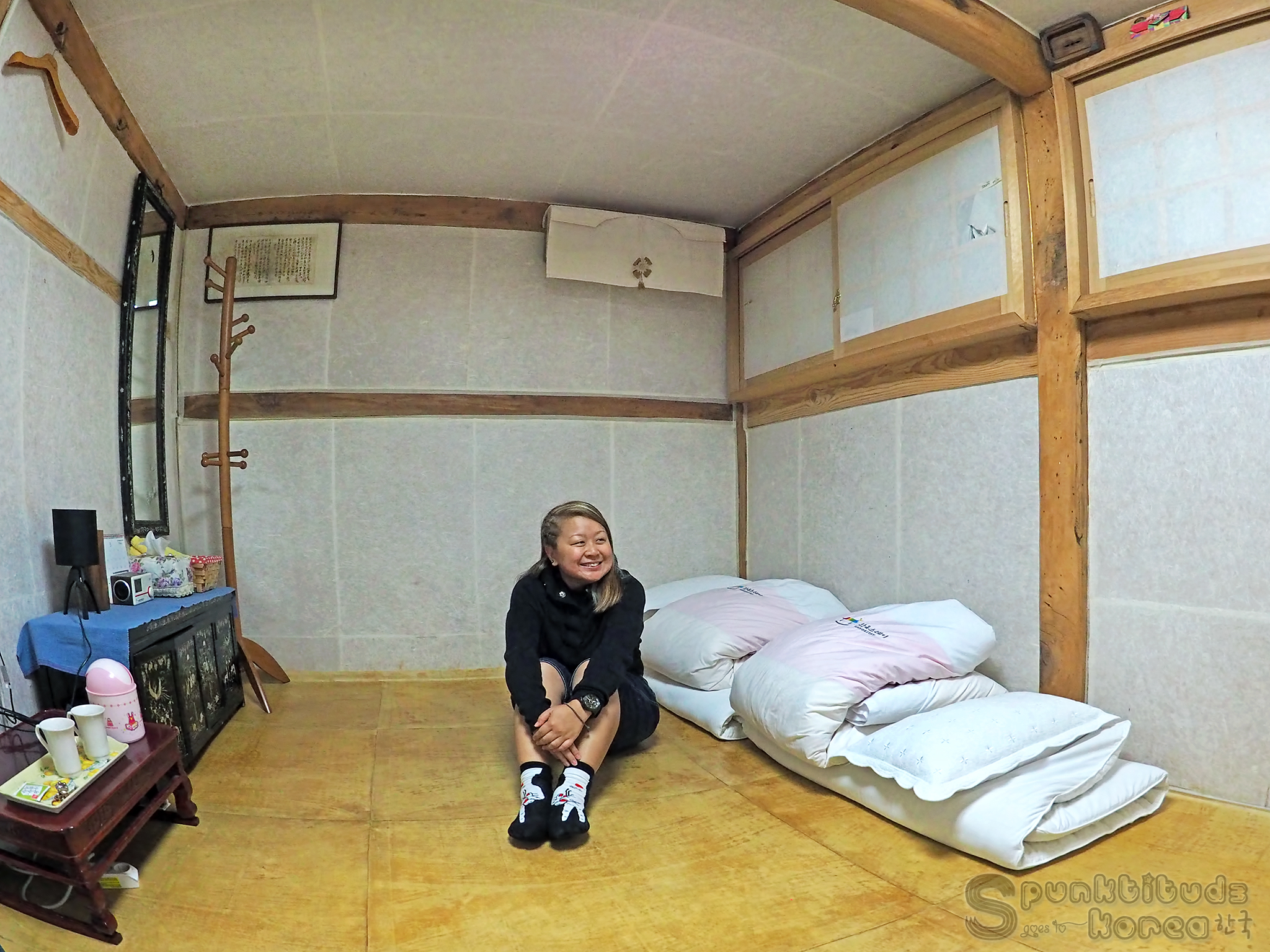 Excited to play Korean for the week :) We had the slightly larger family room for the first night, courtesy of Mr Lee who extended his kindness to upgrade us who arrived exhausted and pretty late in the night. 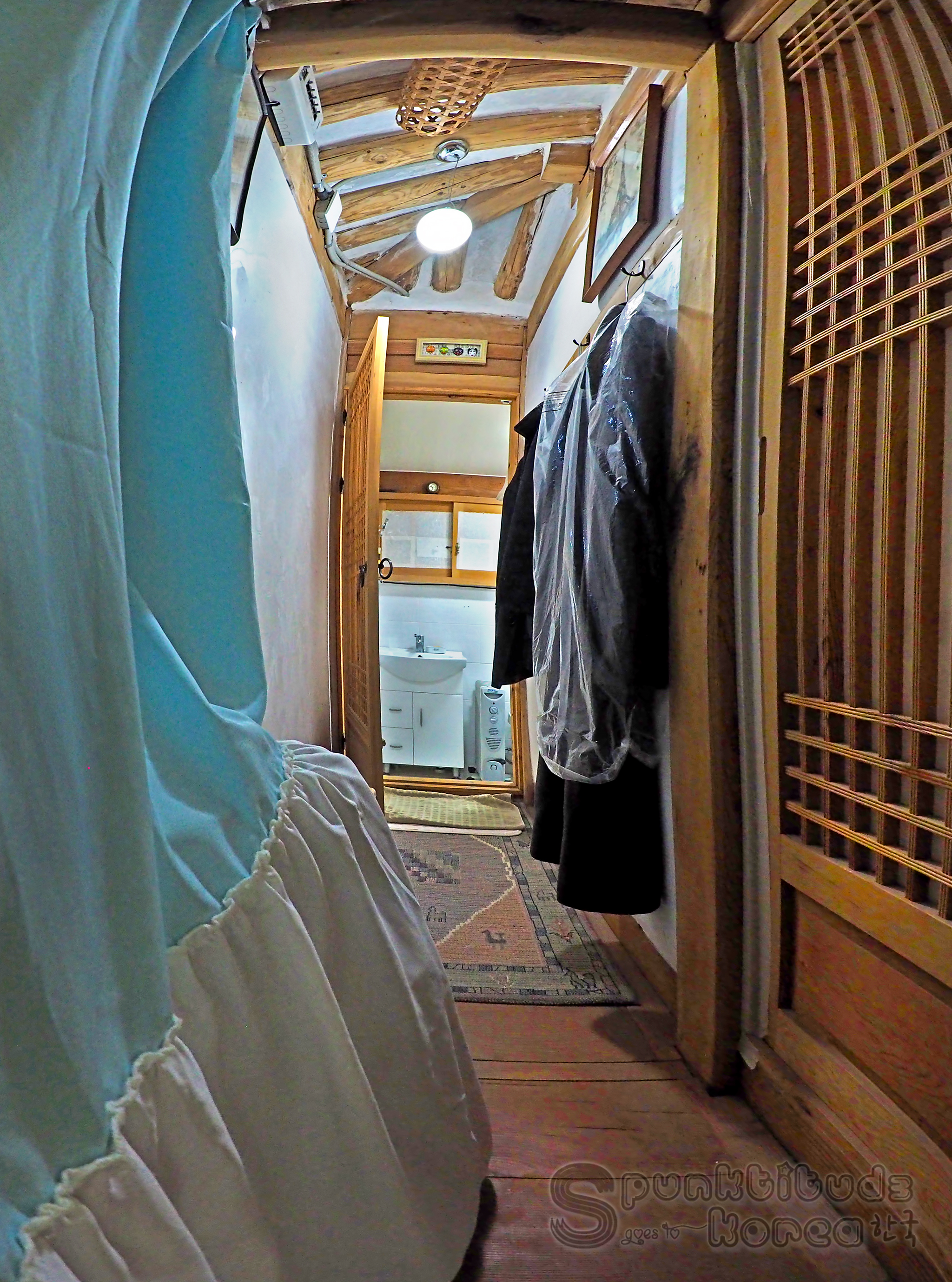 Walkway to the bathroom…will I have to dig my own poophole and boil my own bath water? 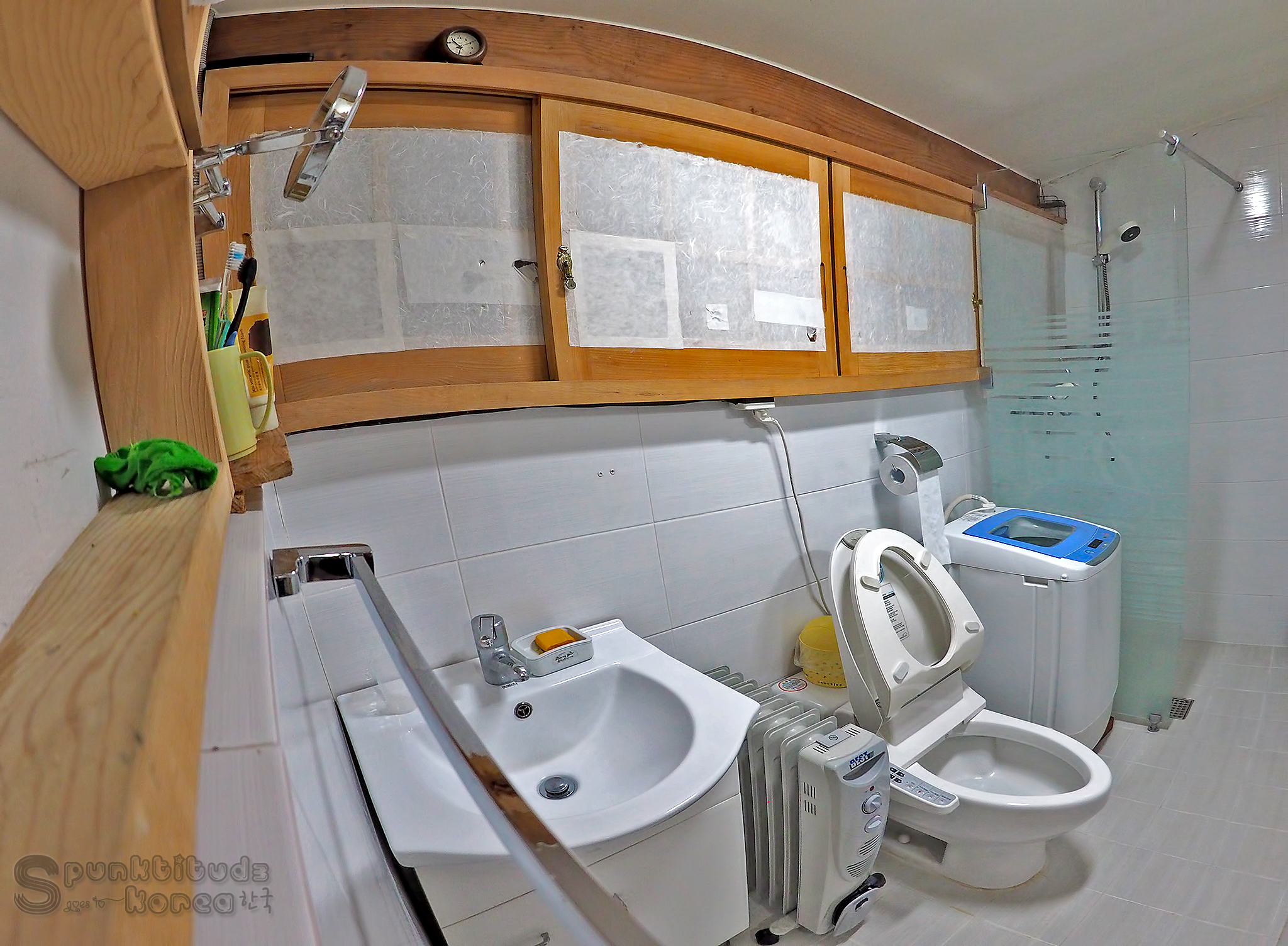 The bathroom was clean with all the modern amenities you can think of – heater, washing machine (free for guests to use), hot shower, and even a toilet seat warmer! Woohoo! 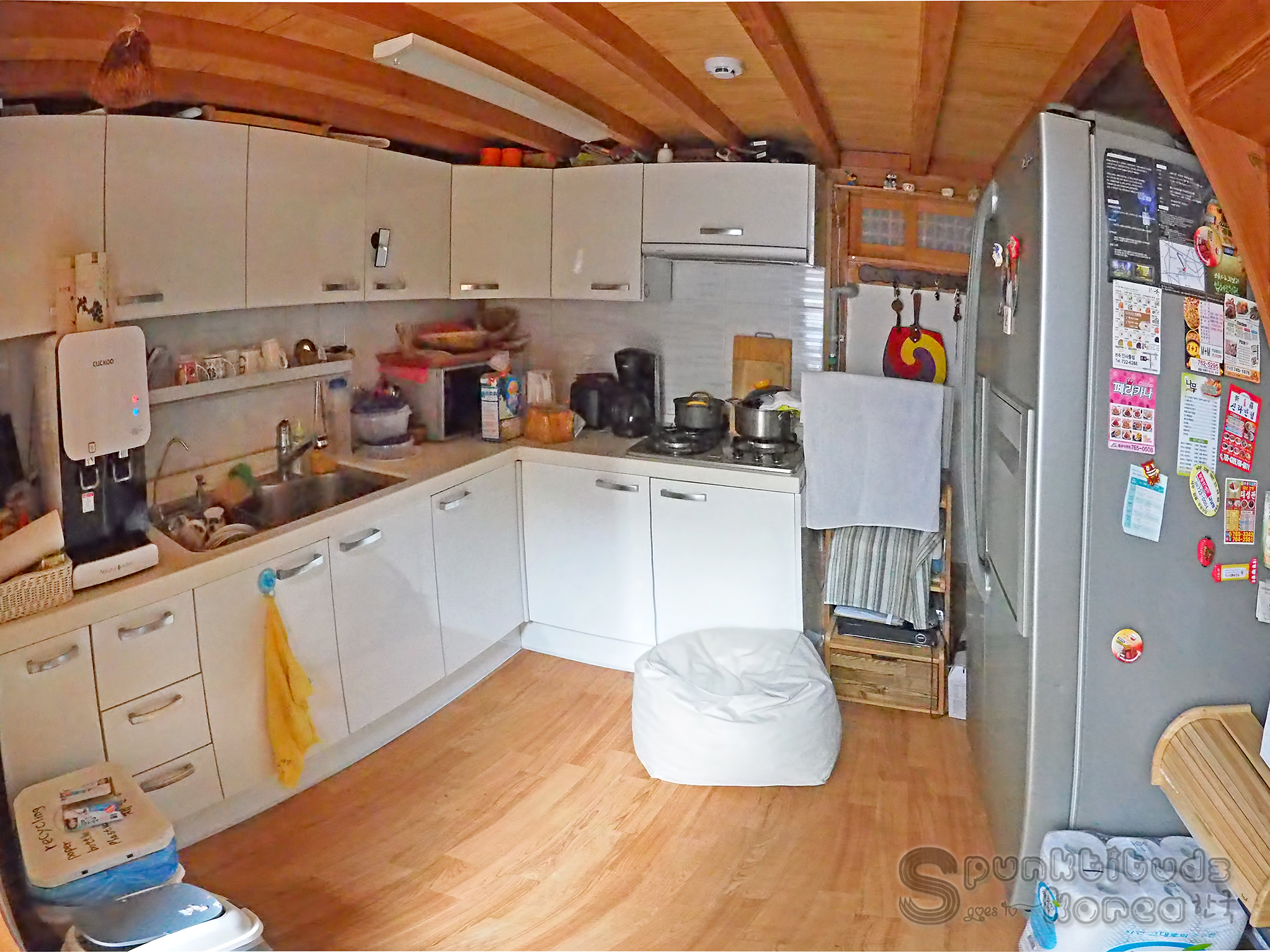 The kitchen is also available for guests to use. The owner has also thoughtfully stuck the contacts of nearby takeaways for guests who want to order in. Keep the Korean fried chicken takeaway away from me, temptation! 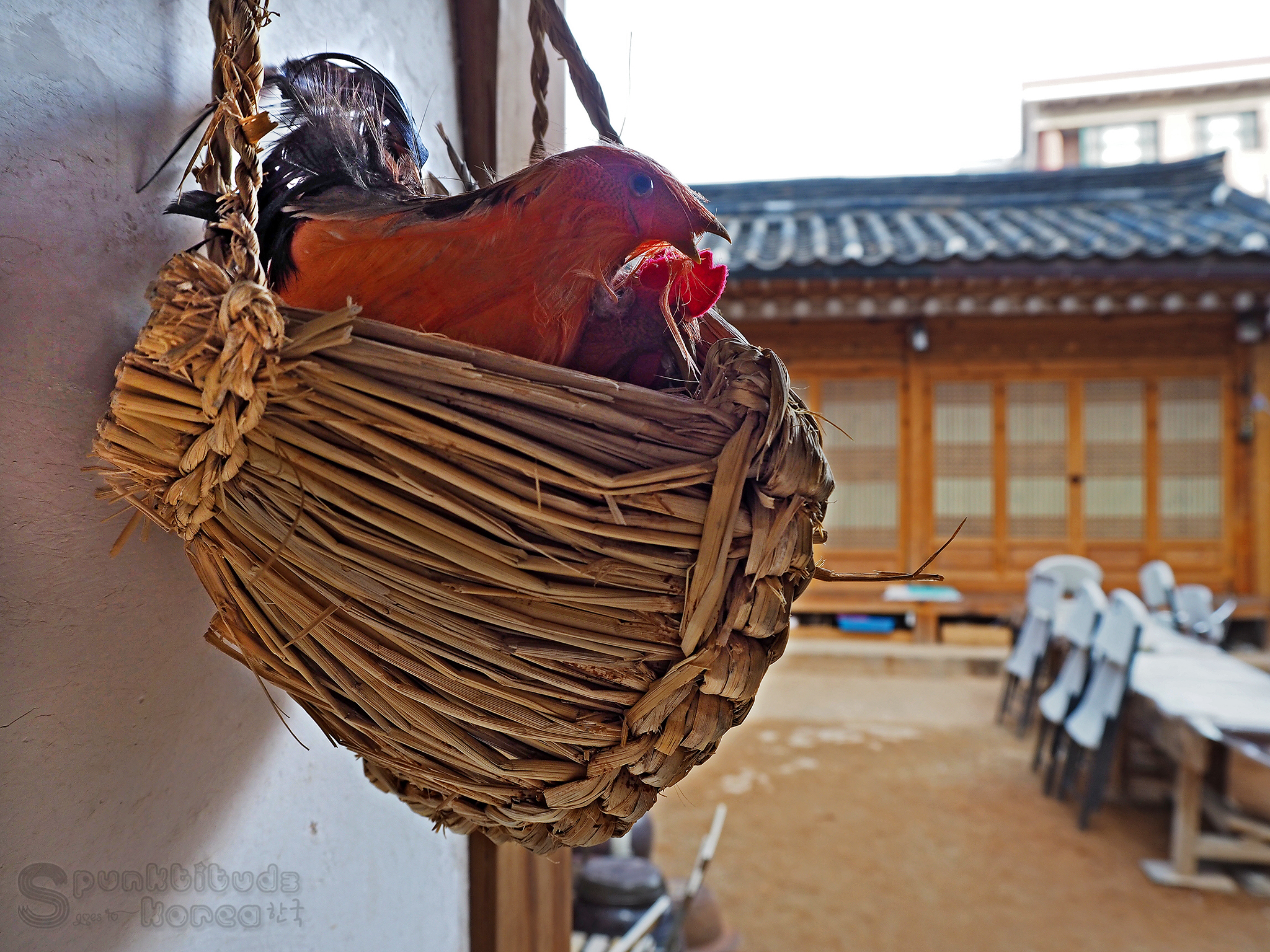 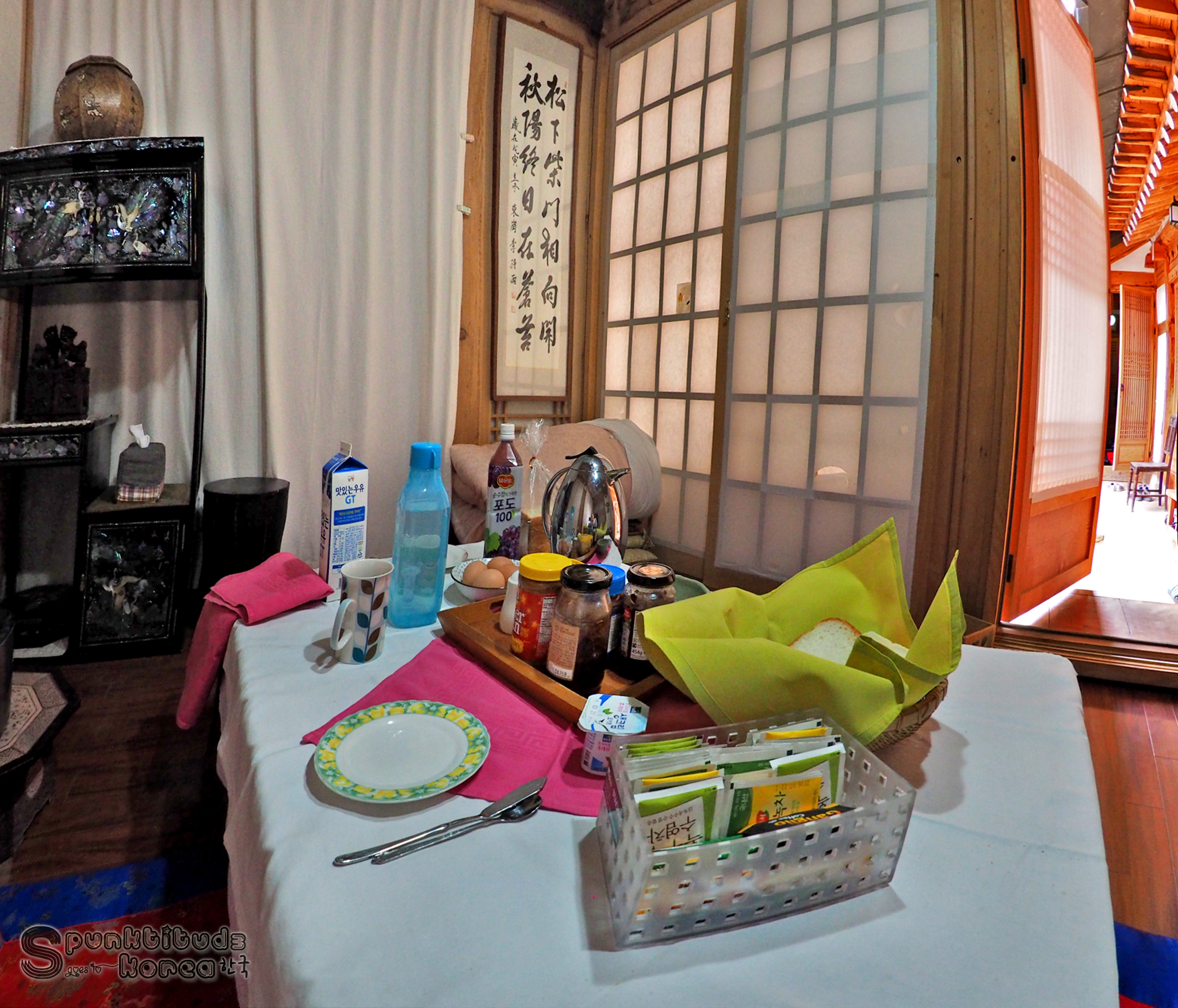 A simple breakfast of boiled eggs, bread and yoghurt, which is included in the room rate, is served daily in the main living hall. We were rushing out one morning and didn’t have time for breakfast, so Mr Lee packed some milk and bananas for us to eat on the go. It was a small gesture, but I was touched.

Mr Lee and his wife were amazingly kind hosts – they let us leave part of our luggage at the hanok when we went away to Jeju (not that the hanok was THAT huge to afford much space), and on the day that we left, Mr Lee made us tea and even drove us to our next destination nearby. Namhyundang felt safe and comfortable like family, and I would visit Namhyundang on my next trip to Seoul. 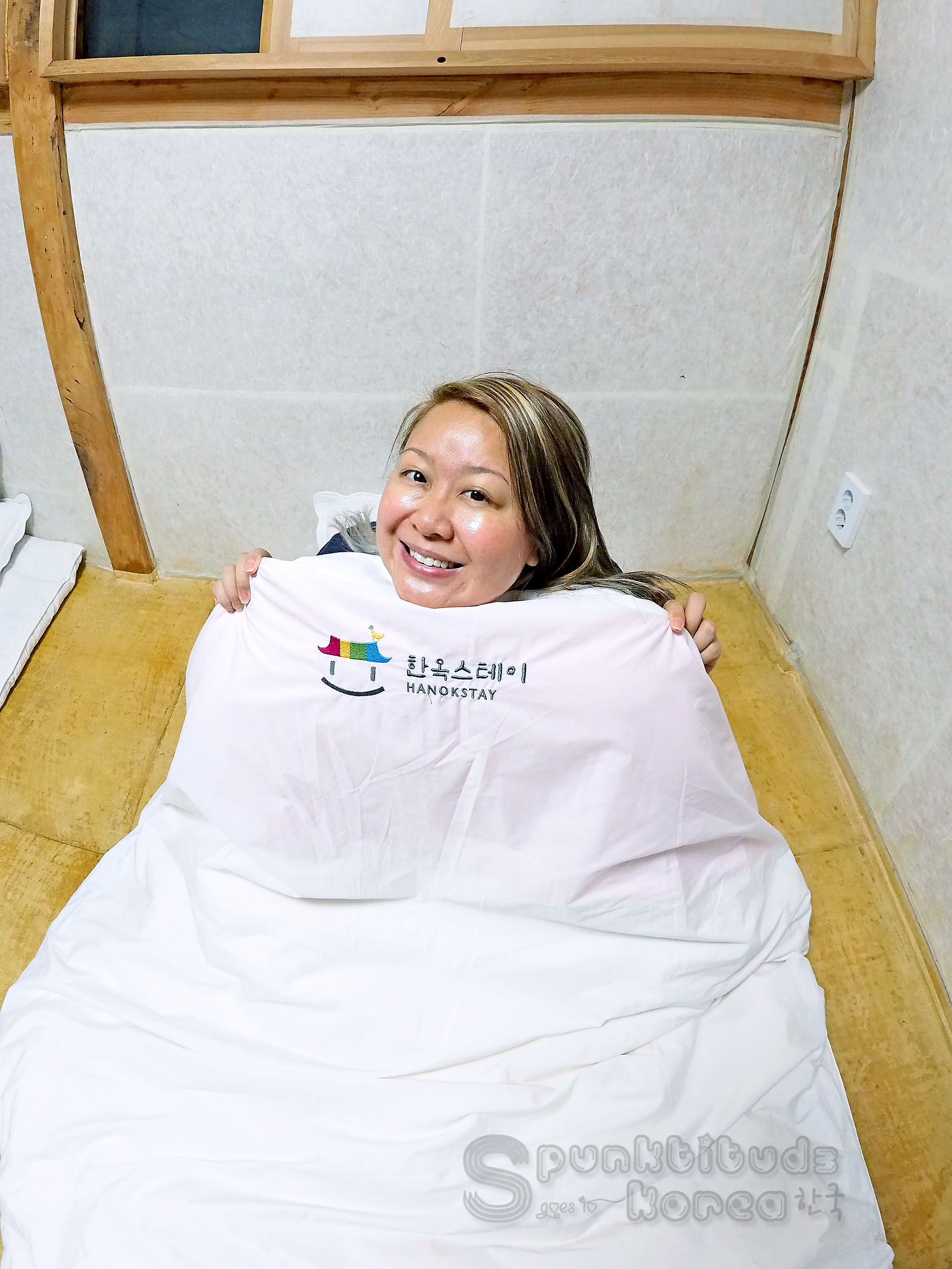 I enjoyed my initial experience with a Korean homestay, and would highly encourage you to stay in a hanok on your next trip to Korea.

A key part of Korean culture, hanoks today are preserved in hanok villages (hanokmaeul), with famous ones being Jirye Art Village, Yangsajae, Jeonju Hanok Village, Rakkojae, and Bukchon Hanok Village. With affluent neighborhoods like Bukchon, it’s hard to believe that hanoks were once a sign of poverty, considered old-fashioned and uncomfortable. For the ultimate hanok indulgence, stay at RakKoJae in Seoul – a night’s stay at the hanok starts from 180,000 won to more than 400,000 won.

When choosing your homestay, in addition to room size and rate, you can also consider its proximity to nearby attractions, availability of Korean-style meals (and modern amenities just in case some can’t live without a television or air-conditioning) and if they offer cultural activities such as tea ceremonies, pottery making and traditional Korean folk games. A number of Korean homestay website listings are available, and do check out reviews on Tripadvisor to make sure you know what you are in for – it may not come with chairs, televisions or beds, but it sure comes with warm Korean hospitality and the opportunity to experience a piece of Korean history :)

Getting there:
BUS: Take the Airport Limousine bus (No. 6011) at Incheon International Airport to Anguk Subway Station (around 60 minutes; slightly more expensive but you do not need to change train lines and can snooze all the way).
OR
SUBWAY: Alight at ANGUK STATION
Depending on which subway line you take, exit at:
Line 1 Jongno 3 (sam)-ga Station. Exit 5 OR Line 3 Anguk Stn. Exit 4. (transfer from Incheon Airport)
Line 5 Jongno 3 (sam)-ga Station. Exit 5 (transfer from Gimpo Airport)

At Anguk Station, walk towards Unhyeongung (small palace about 3 minutes’ walk away), and you will shortly reach the main entrance of Kyodong Elementary School. Turn left into the small alley and you will pass by a restaurant and bookstore on the right. Namhyundang is on the left side at the end of the alley. See here for detailed directions with photos.