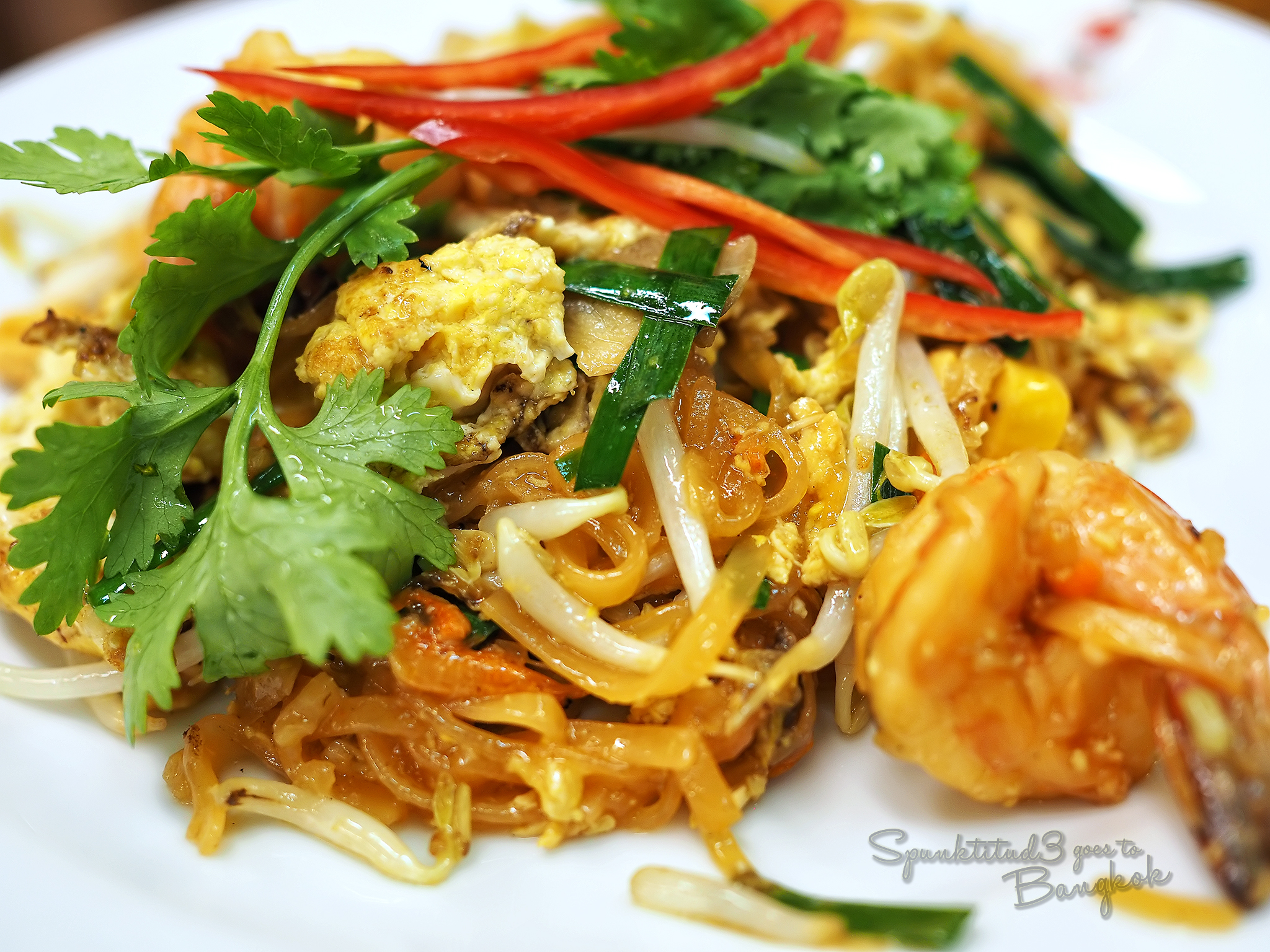 Pad thai, apart from tom yum soup, is one of the most famous Thai food, and not trying it while in Thailand is like not having chicken rice in Singapore. My quest for the best pad thai in Bangkok brought me to Thip Samai, which has been around since 1966. 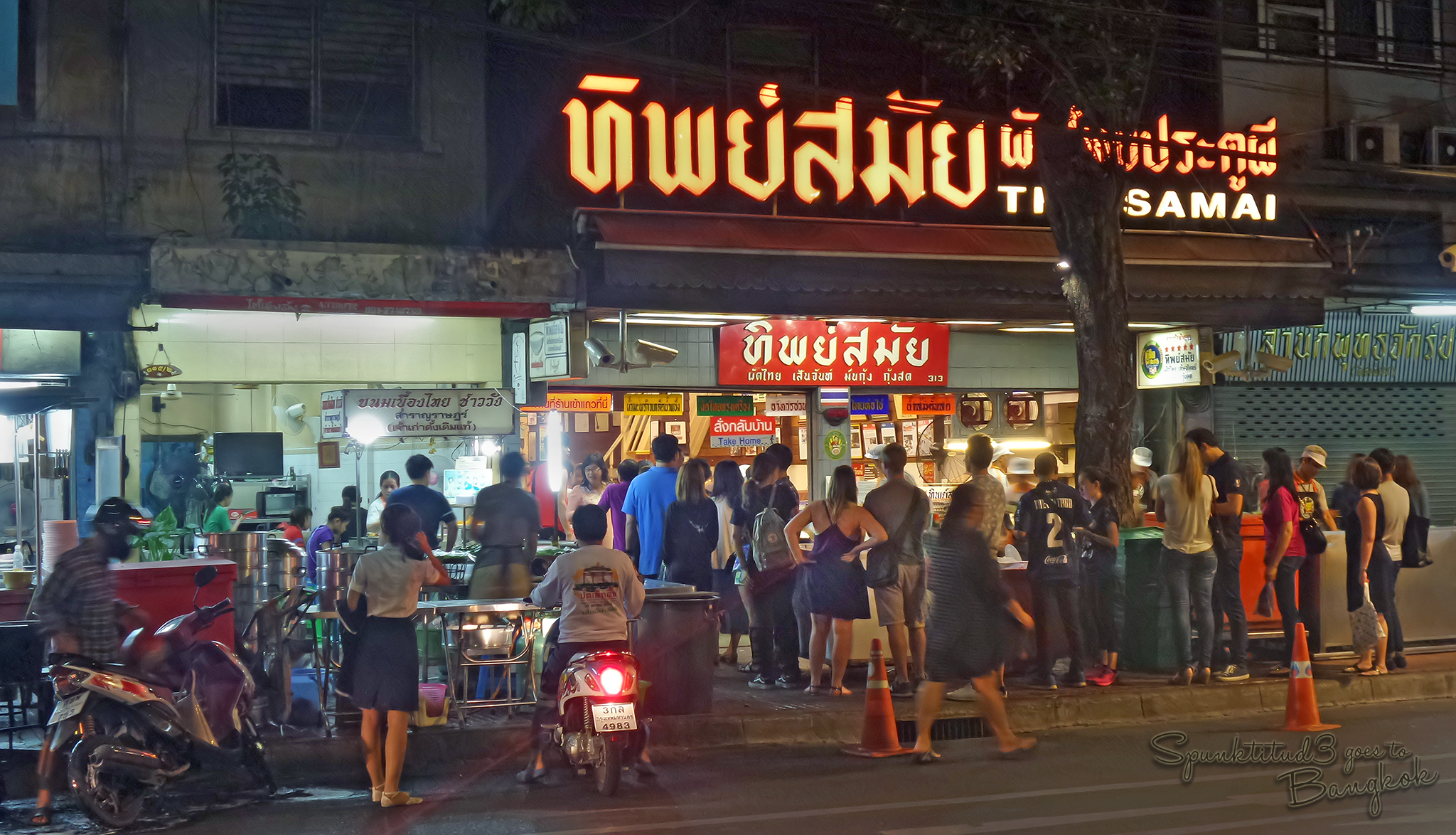 Located just minutes away from the The Giant Swing (Sao Ching Cha), is it not difficult to spot the stall with the perennial long queue outside as it is popular with tourists and locals alike. Locals know the place as Pad Thai Pratu Pi (Ghost Gate Pad Thai) because it’s located near by the gate of The Golden Mountain, which houses the dead body of Wat Saket. Be prepared to queue about 10 to 30 minutes, unless you get to the stall once it opens at 5pm. 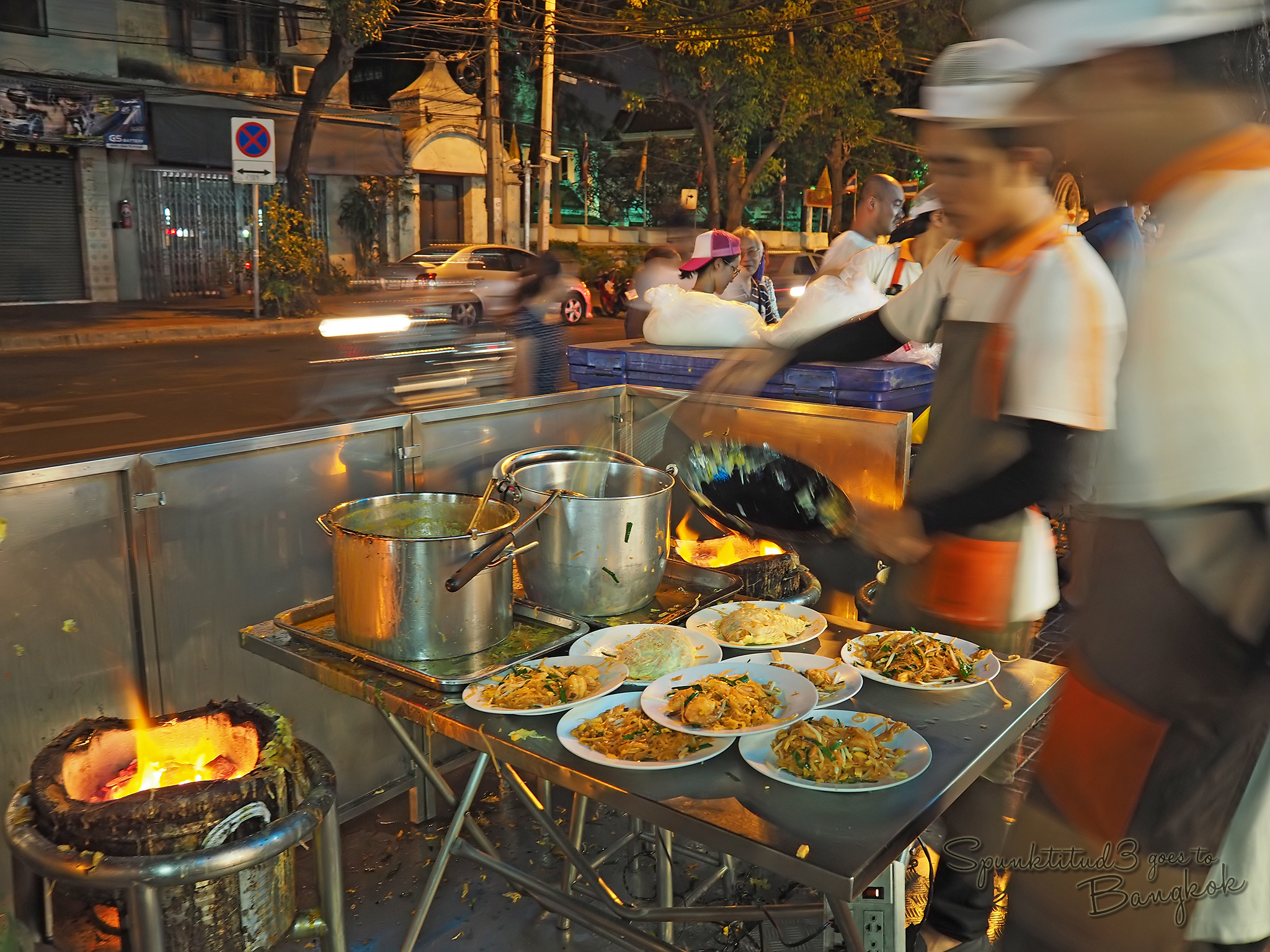 Cooking is done on the sidewalk outside the stall, so be entertained and tempted with smells while you wait in line. I was a bit doubtful whether if it would be as good as its reputation with the clockwork-like cooking. That said, I noticed that they used charcoal stoves to attain the coveted ‘wok hei’ flavour. 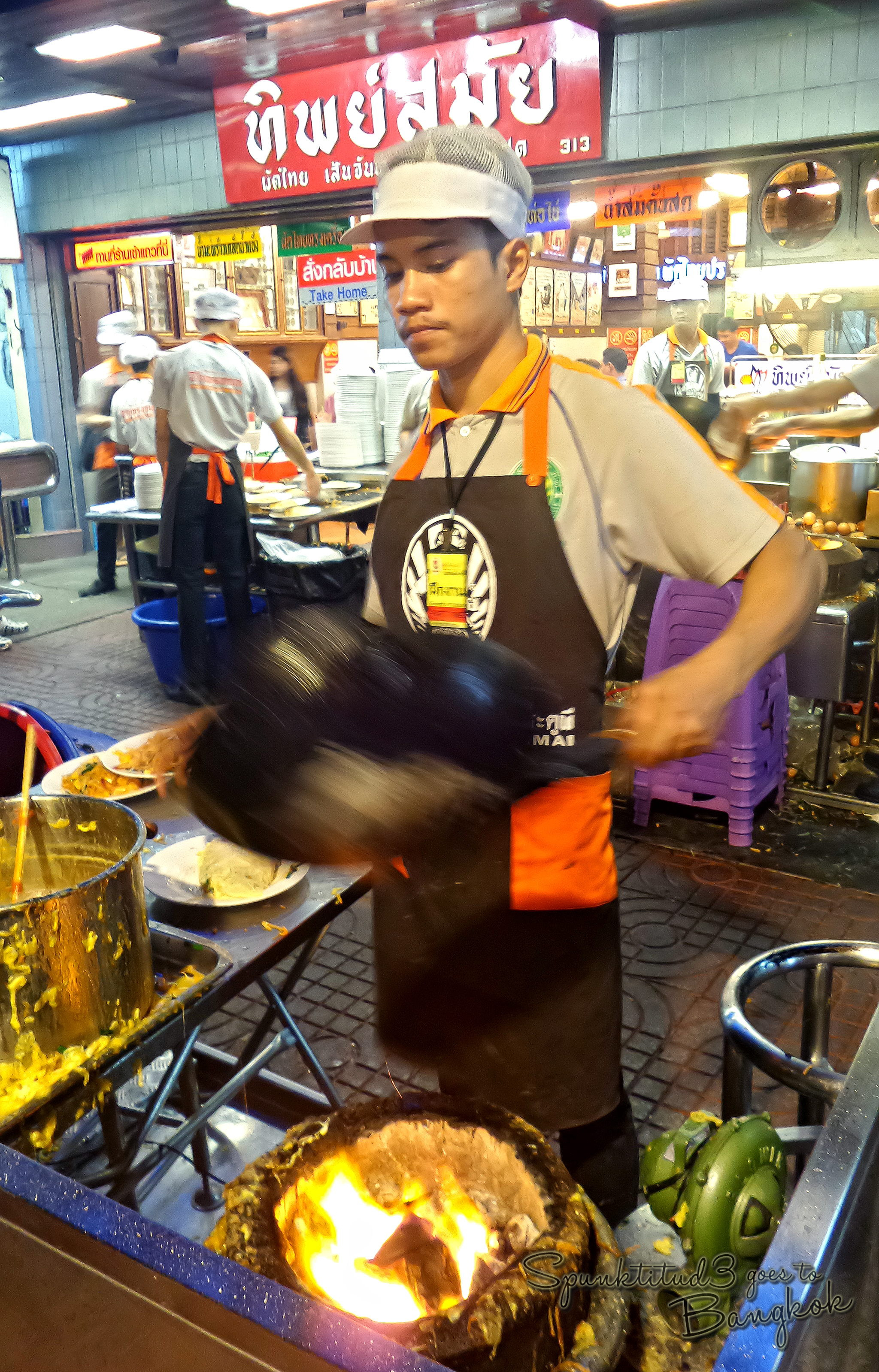 He must have been doing this for a long time judging from the fury of his pan flipping. The heat was also scorching hot; it must be tough standing in front of the sauna stove for hours. 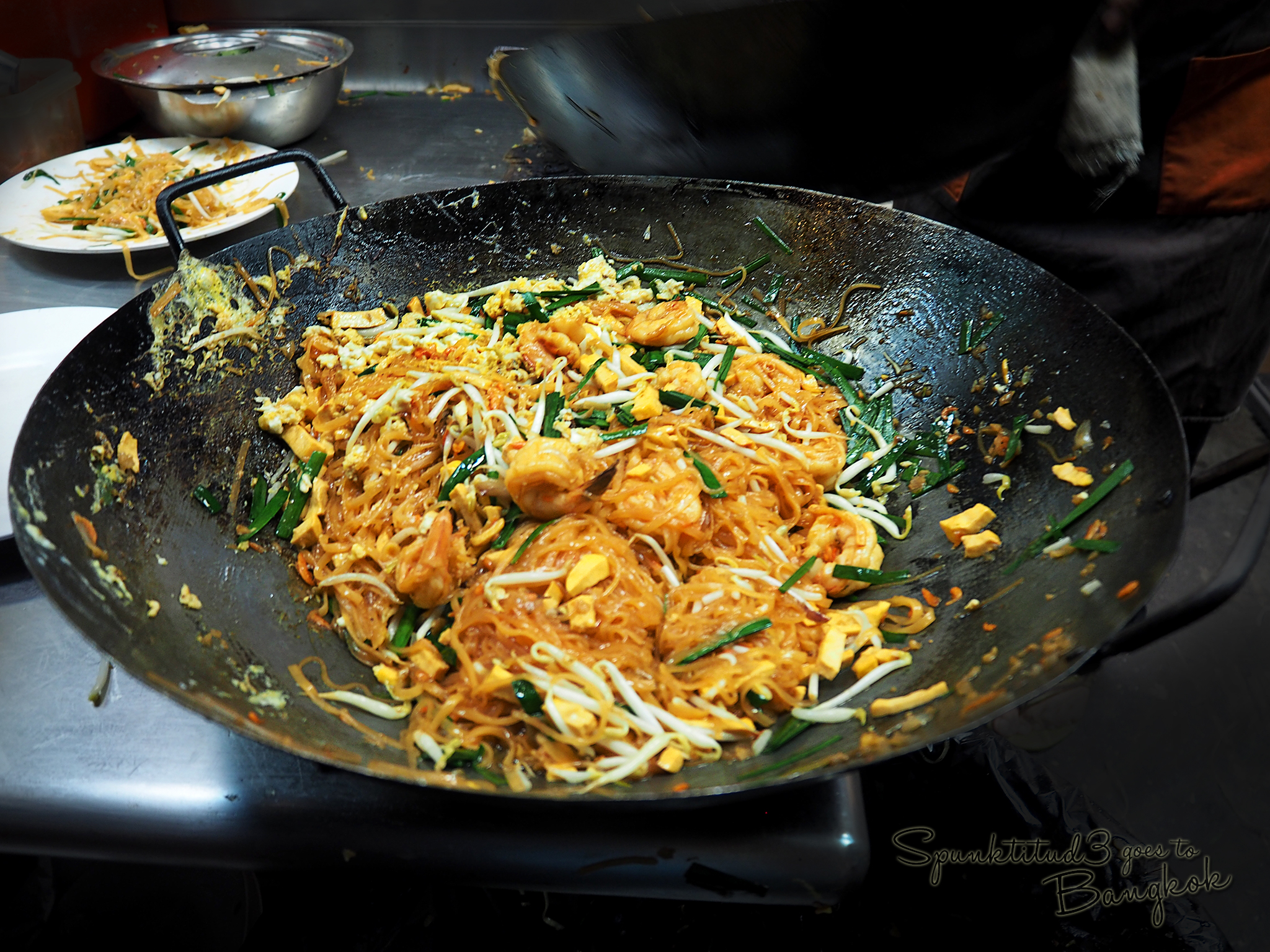 Yumz! What a tantalizing wok of phad thai! Someone pass me a pair of chopsticks…At its most basic, pad thai is thin, flat rice noodles fried with tofu, preserved radish, dried shrimp, and seasoned with dried chili, tamarind pulp, sugar, and fish sauce. Egg is fried together with the noodles or, increasingly, wrapped around them in the form of a thin omelet. 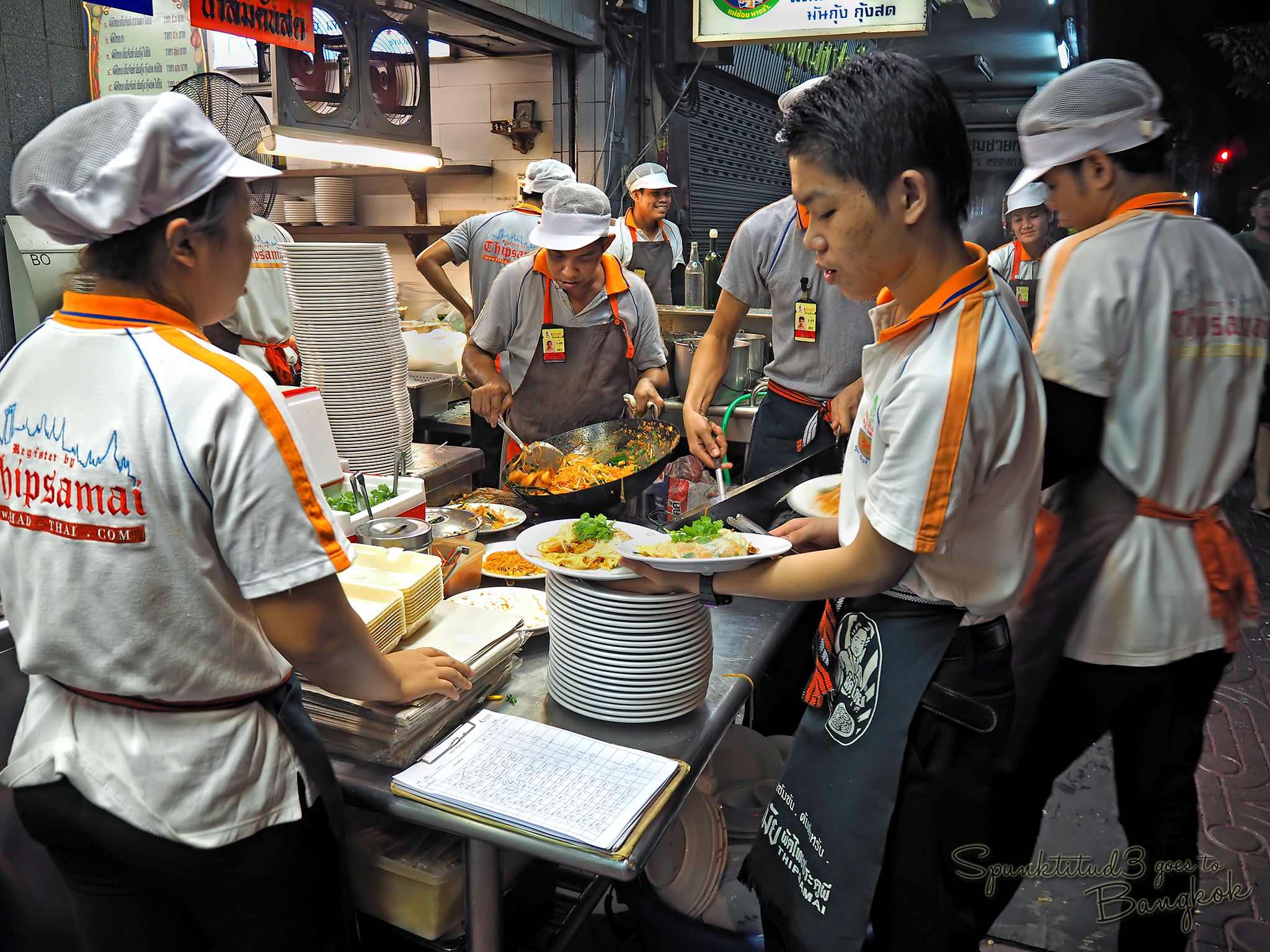 Despite its nationalistic-sounding name, pad thai was only introduced in the 1930s. Few versions of its origins exist. One version that is often heard is that pad thai came from Vietnam, where it is known as pho sao. The Vietnamese made this dish during the Ayutthaya period and, at the time of World War II, the Thais adapted it and named it pad thai.

Another version claims the street dish came into being during Field Marshal Plaek Phibulsonggram’s stint as prime minister between 1938 and 1944. Due to the bad economic situation during these war years, the government encouraged Thais to eat noodles as it was cheap, filling and nutritious when fried with pork and vegetables. Recipes were distributed to teach the people how to cook it. Others also claim that pad thai originated from the Chinese owing to its stir-fry method and use of local ingredients such as tamarind pulp and fish sauce. 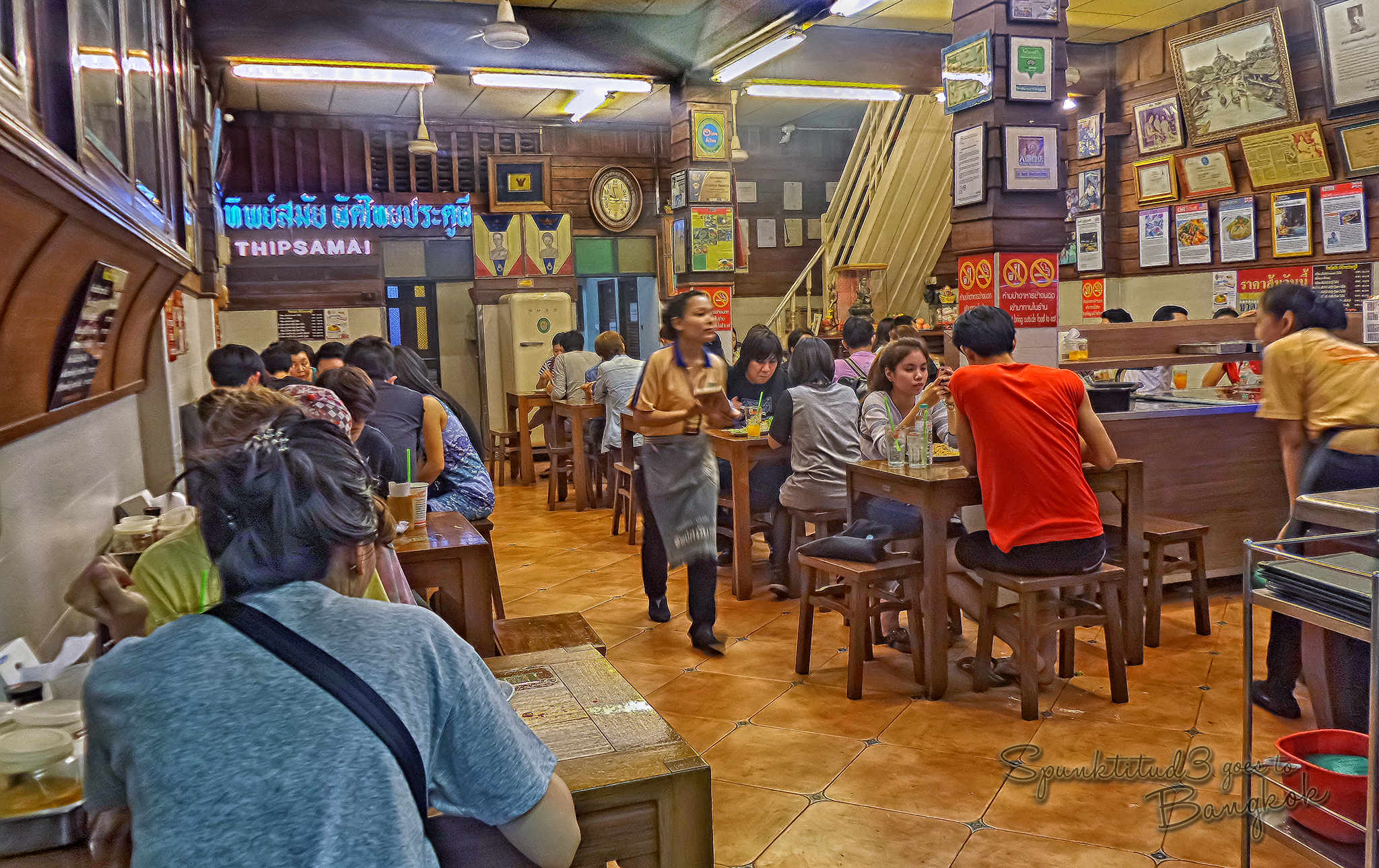 Finally seated! The ambience felt traditional and it was reassuring to see many locals around. 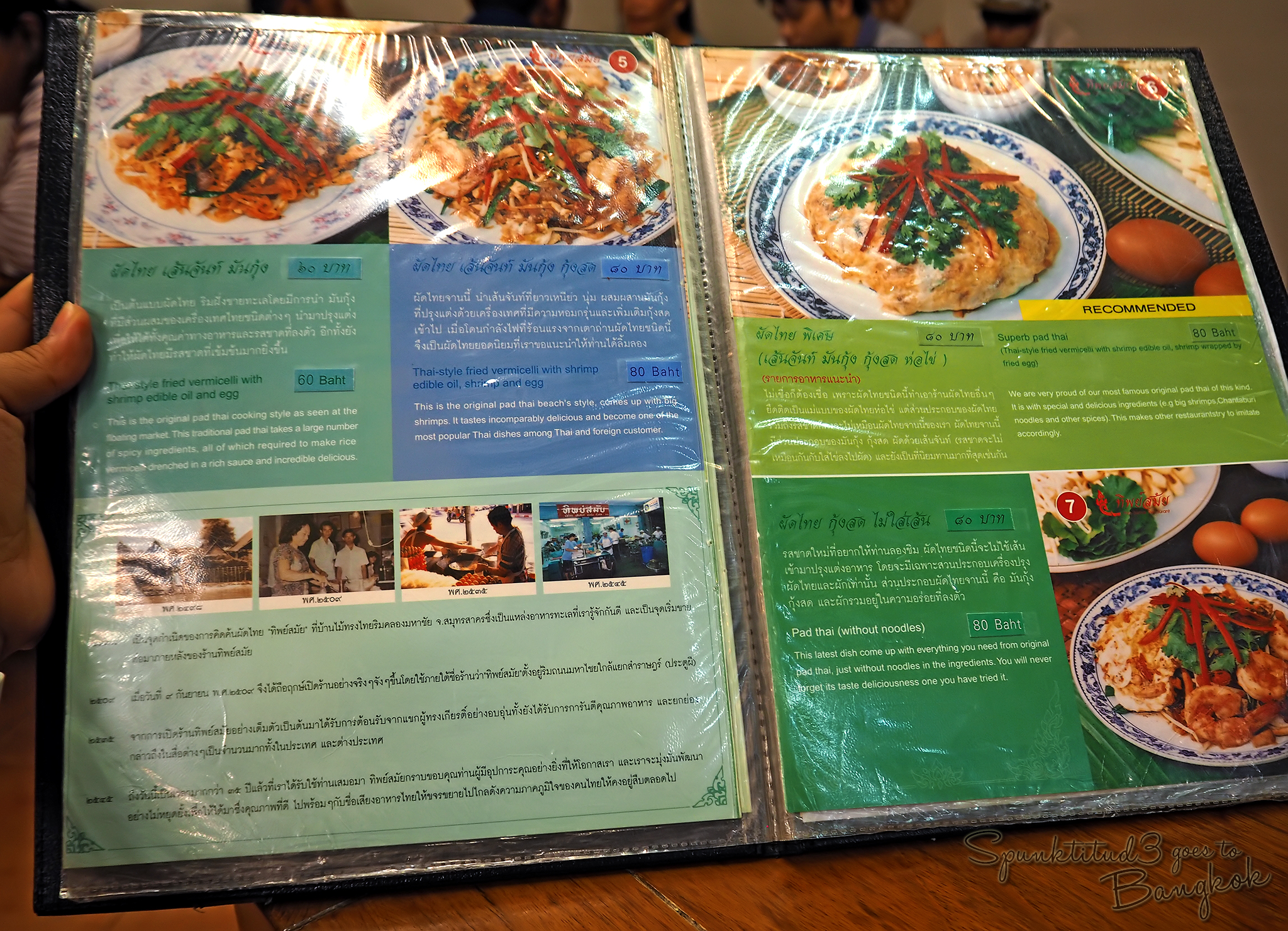 The menu is quite a no-brainer – just pad thai. The original pad thai comes in 2 sizes, and they also offer Superb Pad Thai/Pad Thai Haw Kai Goong Sot (ผัดไทห่อไข่กุ้งสด) which is pad thai wrapped in egg omelet, and Pad Thai Sen Jan Man Goong (ผัดไทเส้นจันมันกุ้ง) which is noodles fried with juices from the head of the jumbo shrimp (oh cholestrol! but sinfully good). 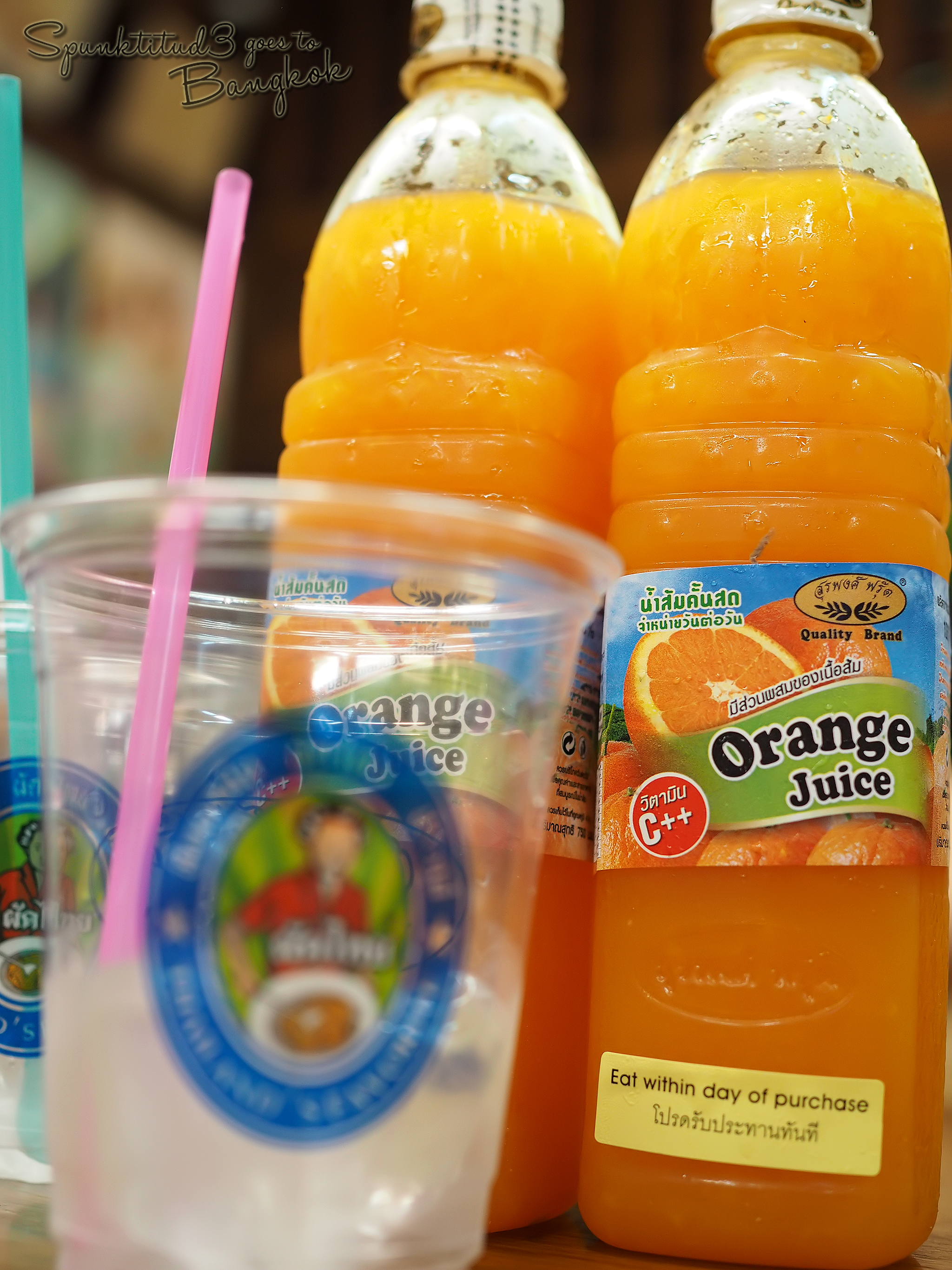 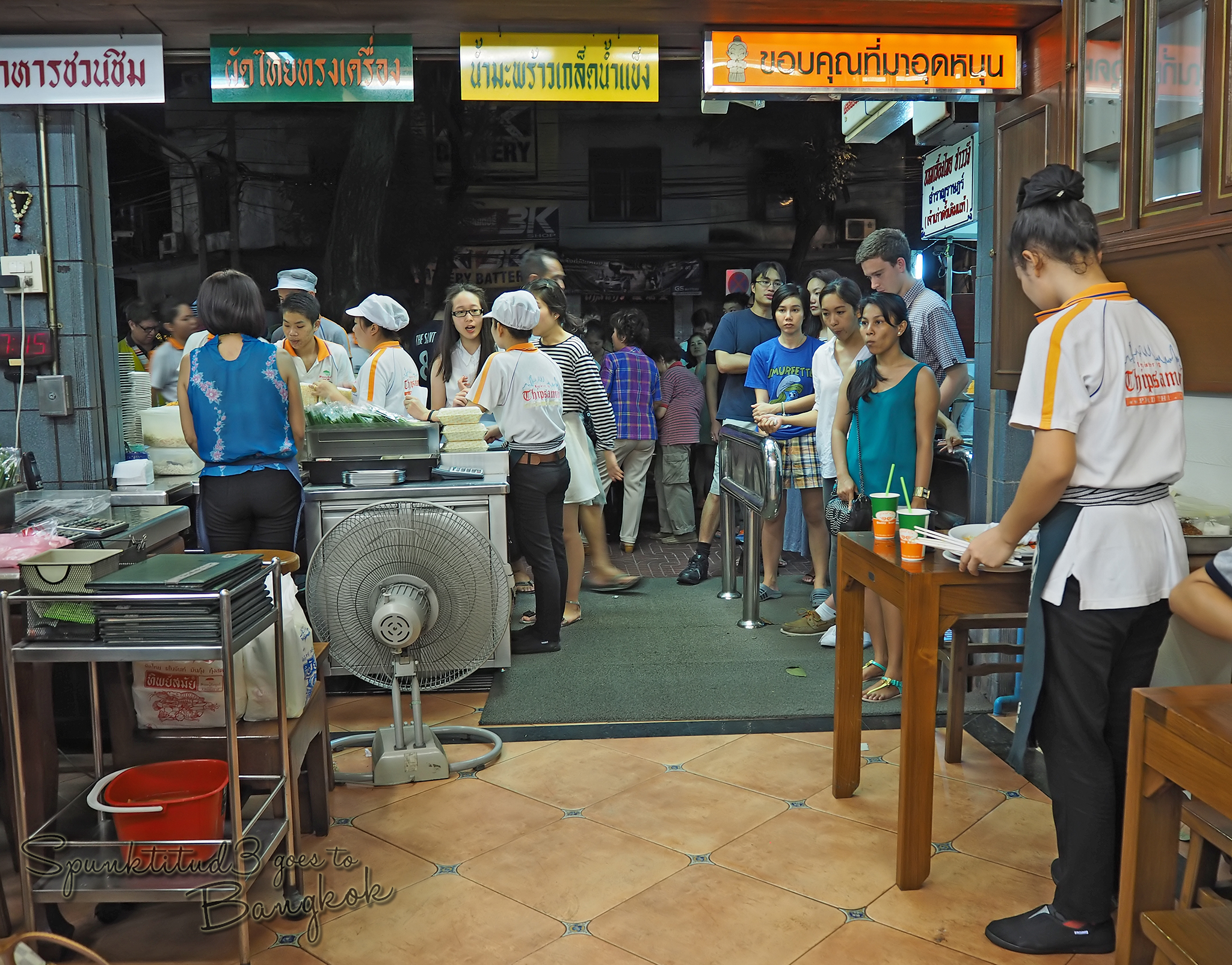 I sipped on my orange juice and watched the crowd as I waited for my pad thai to arrive. 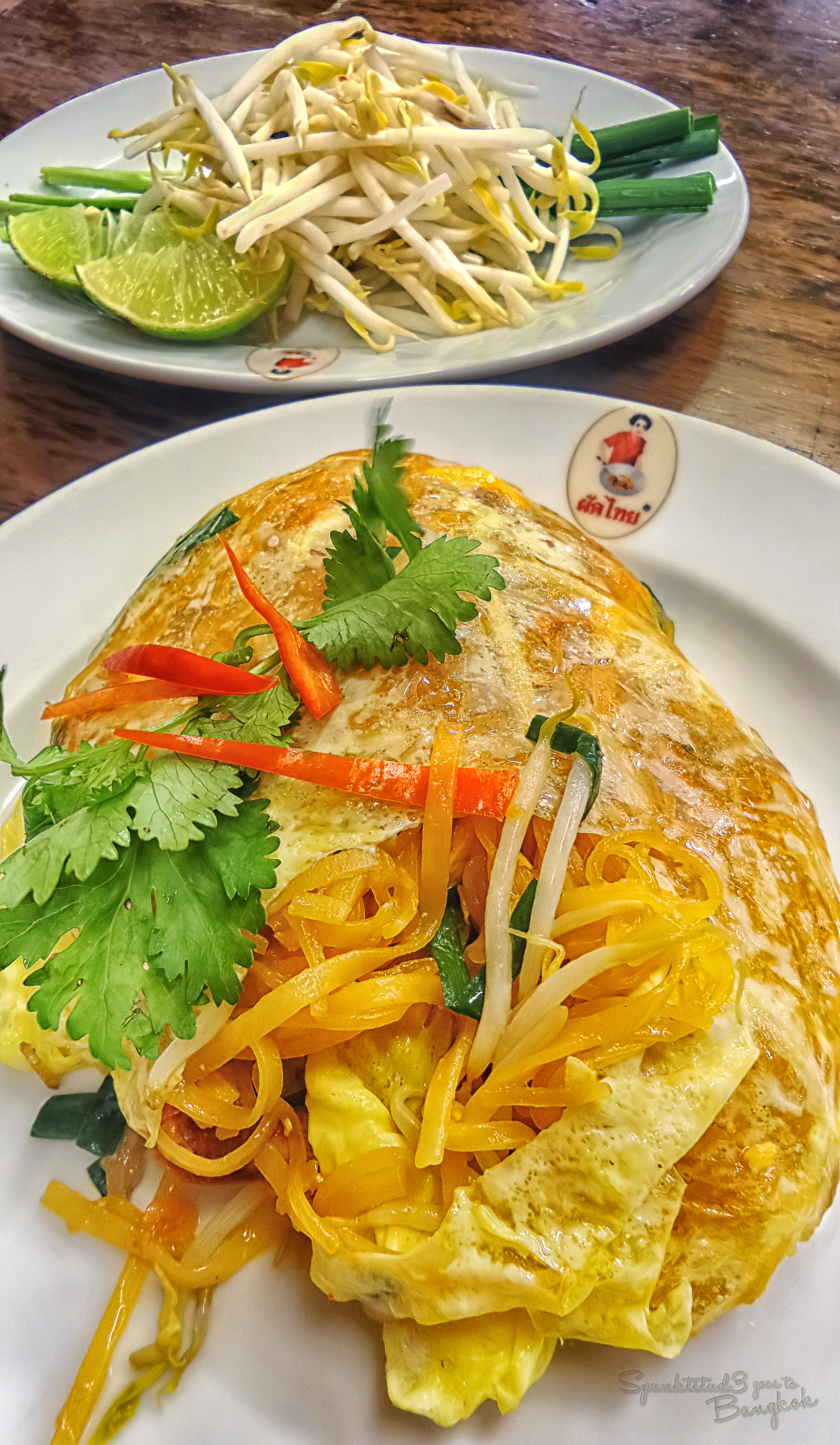 Ta da – le Superb Pad Thai! I never knew fried egg could smell this good, and I felt like I was opening a treasure box. The dish comes with lime wedges, raw bean sprouts and garlic chives which you can mix into the noodles. 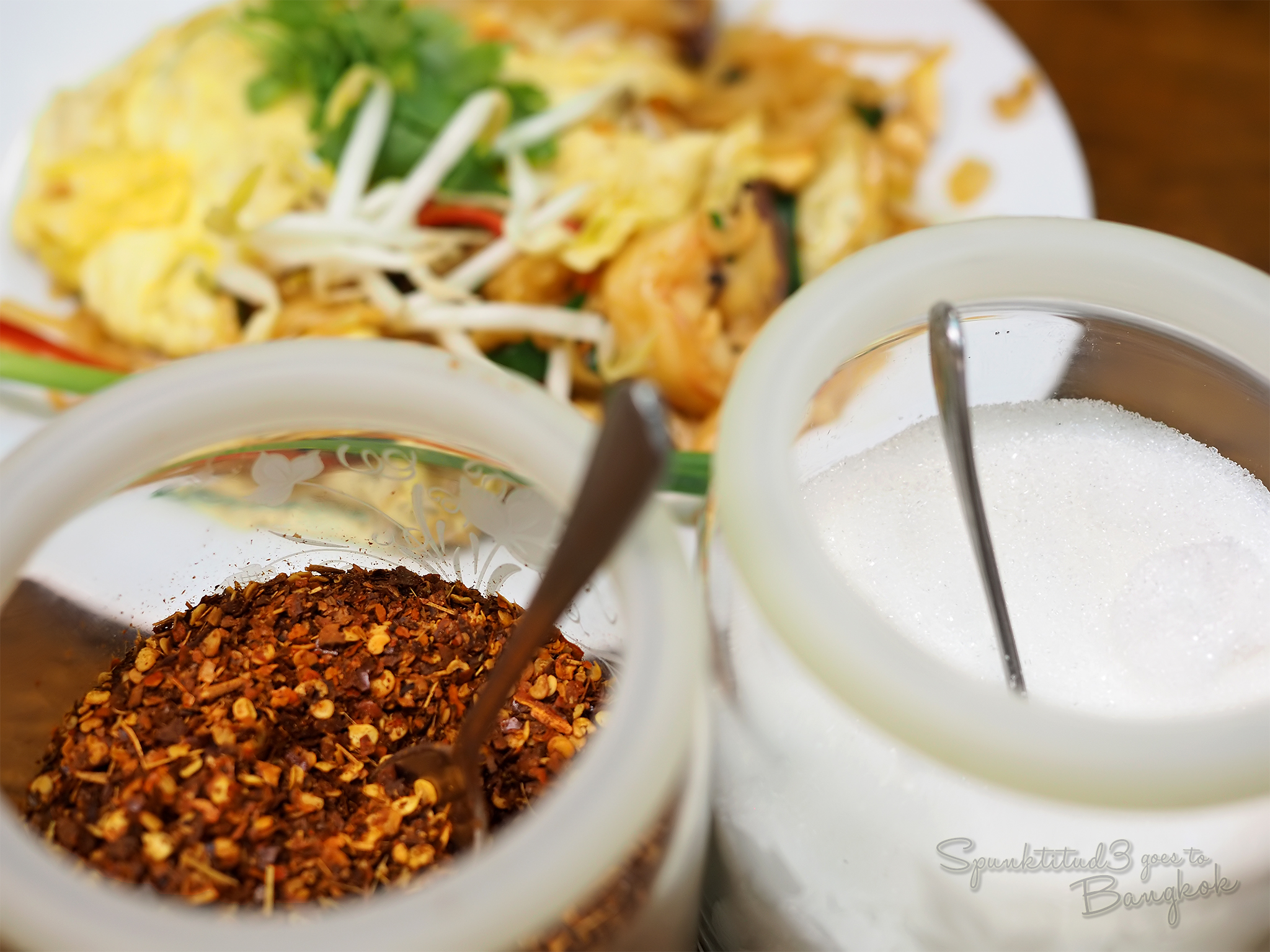 Add chilli flakes and a dash of sugar for extra oomph. For me, as-is was good enough. It was memorable enough to make me return for a second visit on my next trip. This time, it wasn’t as good as the first time I had it as the noodles were a little soft for my taste. Be nice to the staff, cos’ they gave me a Thip Samai sticker as souvenir when I left, haha. 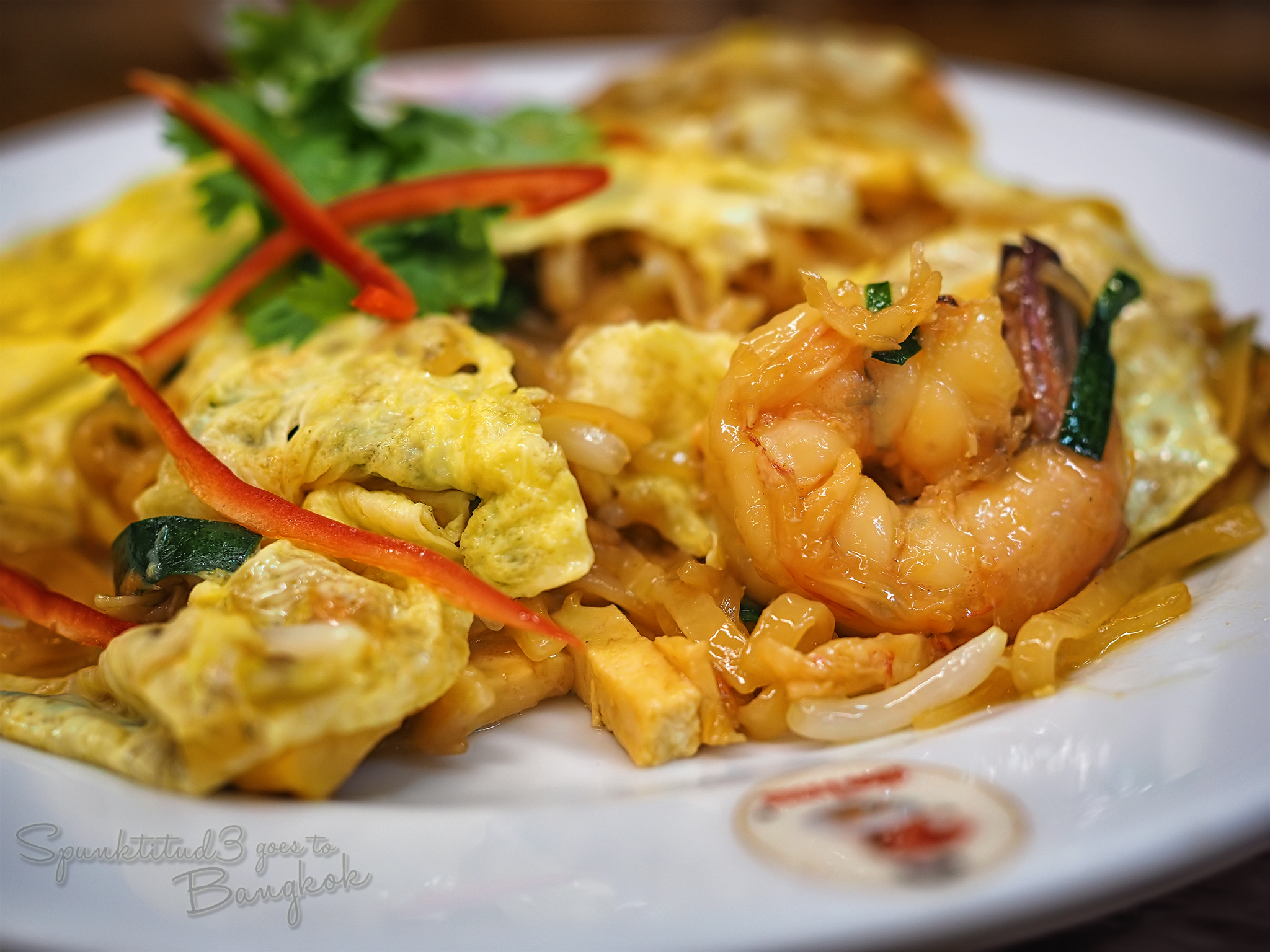 I would probably give other pad thai stalls a try in my quest for the most authentic and delicious pad thai the next time I am back in Bangkok. Thip Samai would still remain my recommendation if friends ask for a pad thai place in Bangkok. Afterall, it is an institution for this particular street food loved by locals and foreigners.
Pad Thai Thip Samai (Pad Thai Pratu Pi)
Address: 313 Maha Chai Road, Samran Rat, Phra Nakhon, Bangkok 10200 Thailand
Hours: 5:00PM – 3:00AM daily
Phone: +66 2 221 6280

Getting There
Take a taxi. There is no nearby BTS not MRT. It is quite close to downtown Bangkok so it should cost less than 100 baht by metre. Plan your visit together with the following places of interest in the late afternoon (remember they only open at 5pm) – about 15 minutes walk from Khaosan Road, few minutes walk from the Giant Swing / Democracy Monument / Golden Mountain (Wat Saket). I used Google Maps to guide my walk.

If you really wish to take the train, you can take the Silom Line to Saphan Taksin Station (S6 Station), go out through Exit No. 2, take Chao Phraya Express Boat to Ta Chang Pier and take a taxi or tuk tuk to Thip Samai. That is, if you have loads of time to kill.