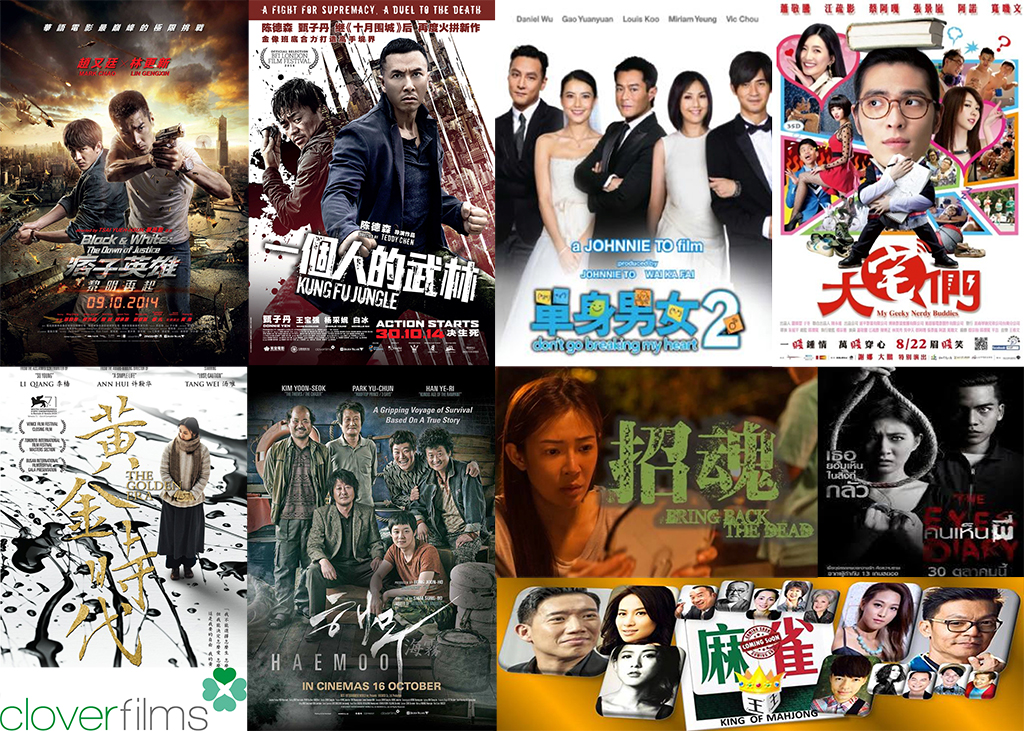 Visiting the movie theatres is almost a national hobby in Singapore so it’s always great to know what upcoming movies I can look forward to. While most people would choose to watch Hollywood blockbusters, I like to support good Asian movies as well. 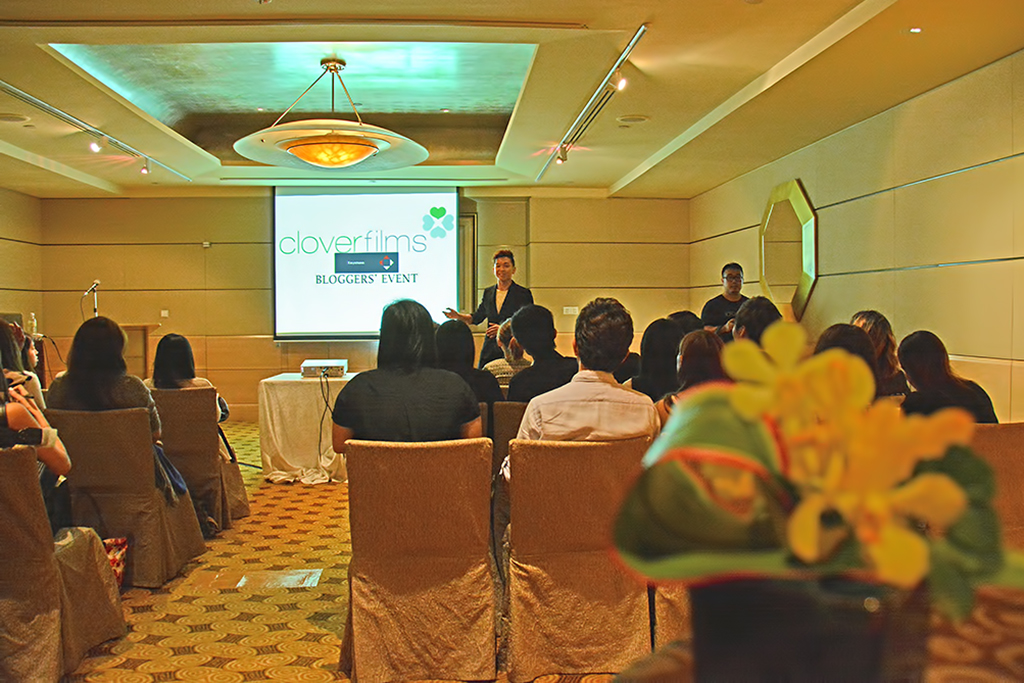 So thanks Clover Films for giving me a sneak peek at the upcoming films they will be releasing from now till March 2015. There is a good mix of genre, so there is definitely a movie to interest everyone :) 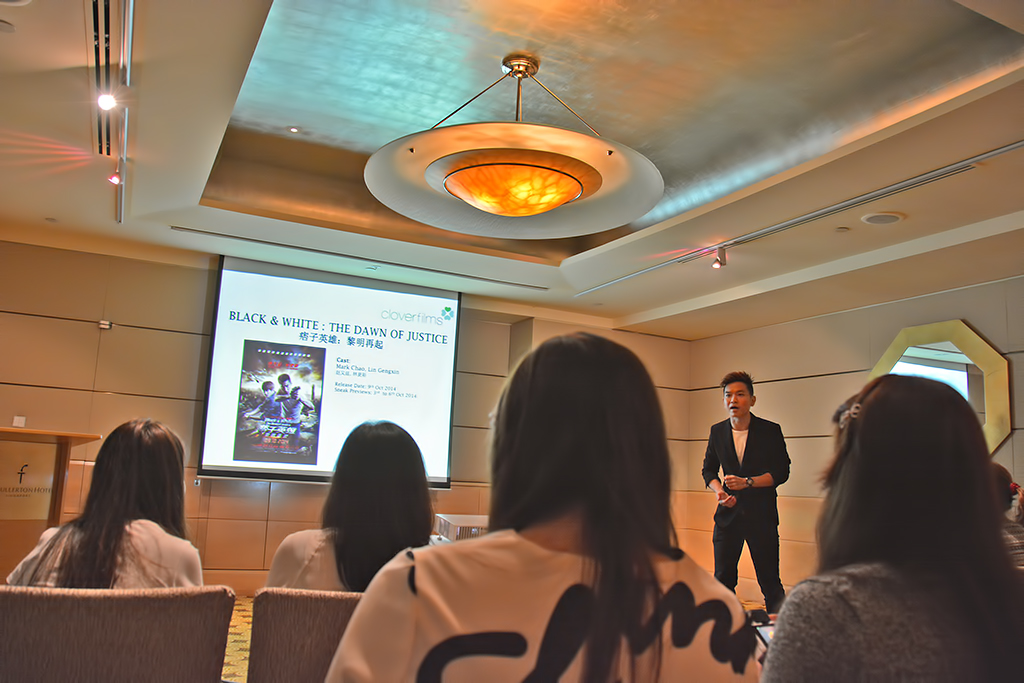 That’s the ever-suave Kevin from Clover Films unveiling the upcoming movies to the bloggers. Out of the presented movies, these few caught my attention… 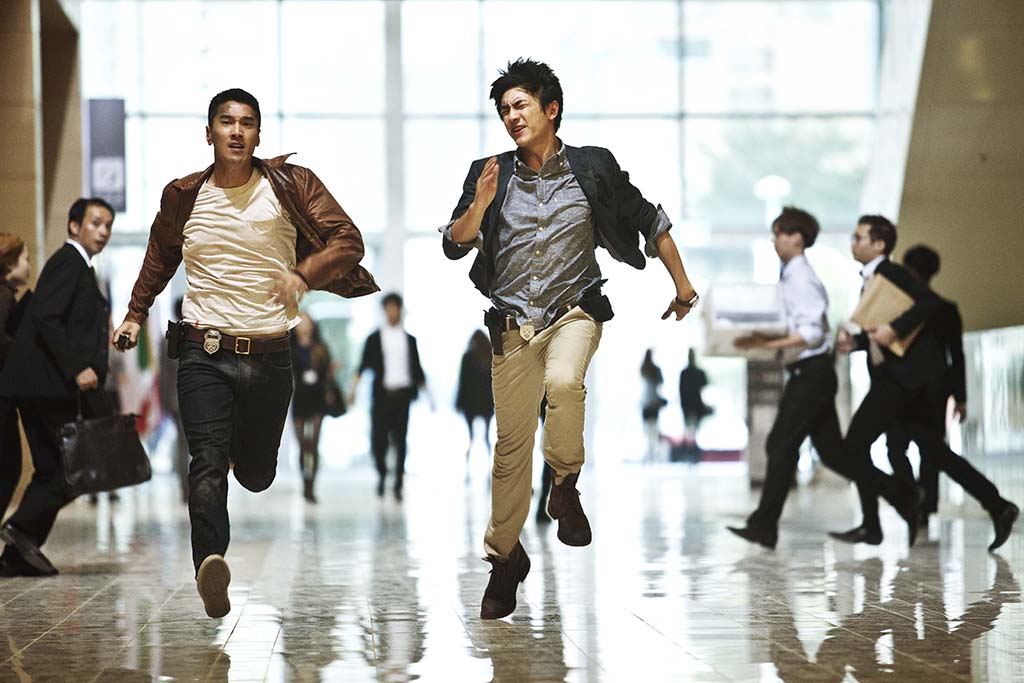 I always had a thing for  police action flicks, not to mention one with such cute actors, heh. The original drama series won numerous Golden Bell awards including Best Leading Actor for Mark Chao, so this would definitely be a movie I will be watching.

BLACK & WHITE : THE DAWN OF JUSTICE
痞子英雄:黎明再起
Singapore Release Date: 9 October 2014
Synopsis:
Panic spreads the whole city as a series of bomb explosions happen within hours and this is just the beginning of a tight-knit conspiracy. Righteous and impulsive, Wu Ying-Xiong is paired up with the intelligent but arrogant loner Chen Zhen to track down the mastermind behind the bombing incidents. Soon Wu and Chen will discover that the bombings are just the prelude to a massive destruction. Stolen military missiles are now aimed at the Harbour City; moreover, a deadly virus is about to breakout, which is so highly contagious that it can devour the whole world in 14 days. All the chaos is planned by the Nightwalkers—a secret assassination squad which used to serve the highest government officials…
吳英雄和陈真发现,所有的炸弹客身份与重大通缉犯吻合,按順序接下來就是— 徐達夫 。這一次,吳英雄和陈真要面对的,是整個城市的瞬间毀坏,海港城陷入 空前危机。
他们真正的挑战还不只是这些,全城八百万市民之中,其中一人的身上种下了最 新的病毒“伊魯康及”,15 小时后在体內演化完毕,就会变成高傳染力的病 毒,开始在海港城進行大量的传染,14 天后世界都将陷入新世代“黑死病”…
Cast: Mark Chao, Lin Gengxin 赵又廷, 林更新 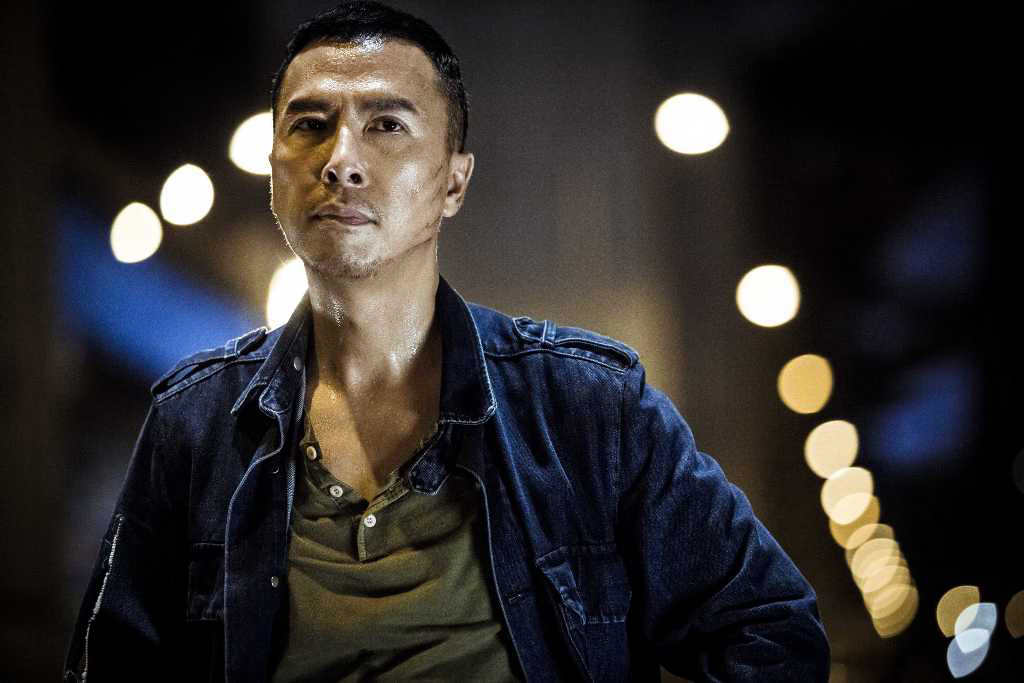 Kungfu action lovers can look forward to Donnie Yen’s new movie. There was so much action, the trailer alone left me breathless. The movie has been selected to be shown at the BFI London Film Festival 2014. 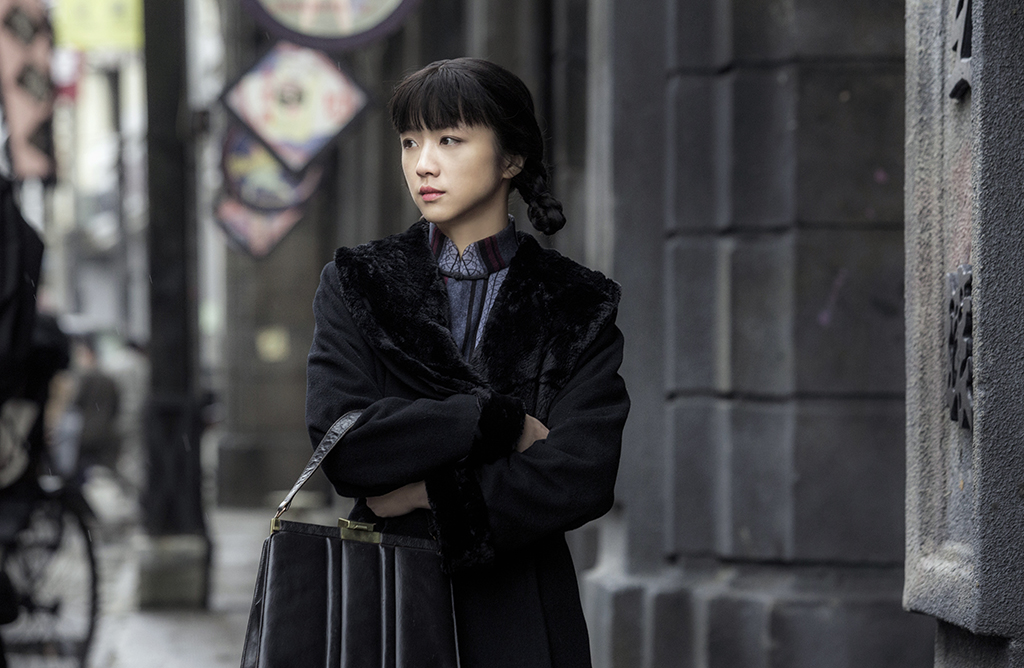 THE GOLDEN ERA
黄金时代
Singapore Release Date: 16 October 2014
Synopsis:
The writer we now know as Xiao Hong was born Zhang Naiying on the day of the 1911 Dragon Boat Festival (June 1st) in Manchuria, north-east China. Her mother died when Xiao Hong was young and her estrangement from her tyrannical father sparked a long quest for an independent and emotionally satisfying life. She was rescued from destitution by hard-drinking fellow writer Xiao Jun, but their fraught and competitive relationship brought her more heartache than joy. She found a kindly and considerate surrogate father in the great writer Lu Xun.
While evacuated to safer inland areas to escape the Japanese invasion of China – and on the rebound from what turned out to be the definitive break with Xiao Jun – she married another novelist from the North-east, Duanmu Hongliang. They fled together to Hong Kong in 1940. A month after Hong Kong, too, fell to the Japanese on Christmas Day of 1941, Xiao Hong died of tuberculosis at the age of 31. But several key episodes in her life remain obscure and disputed, even now.
上世纪二十至四十年代的中国，那是一个民气十足、海阔天空的时代，一群年轻人经历了一段放任自流的时光，自由地追求梦想与爱情，有人在流离中刻骨求爱，有人在抗争中企盼家国未来……萧红，一个特立独行的女子，一路流亡，从北方到南方，从哈尔滨到香港，一边躲避战乱，一边经历着令人唏嘘又痛彻心扉的爱情与人生。对生的坚强对死的挣扎在她笔下穿透纸背，她的人生亦是如此
。 Cast: Tang Wei 湯 唯, Feng Shao Feng 馮紹峰 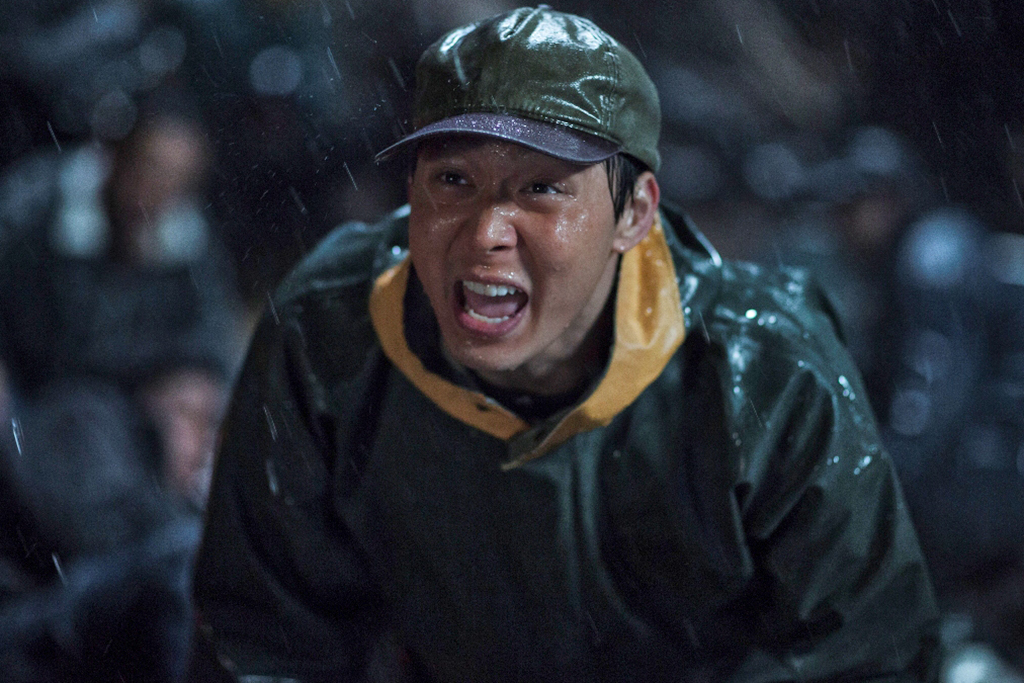 This movie starring the cute Rooftop Prince actor & JYJ member Park Yoochun is also one to look out for. It’s selected as Korea’s entry for the 87th Academy Awards Best Foreign Language Film, so I expect a good fight with The Golden Era. Who deserves to win? I will tell you after I watch both movies :)

HAEMOO
海雾
Singapore Release Date: 16 October 2014
Synopsis:
Based on true events, is the story of a group of fishermen who are driven into madness when their attempt to smuggle illegal migrants ends in a horrible tragedy.
Six crew members –led by the captain, is the kind-hearted chief engineer ‘Wan-ho’ (Moon Sung-geun) who had an eventful life and lives hidden on the boat. To the naive and youngest crew member ‘Dong-shik’ (Park Yoochun) who just started working aboard the ship recently– begin their dream of having their boat with a full load of fish. However on the open sea, they are transporting something, it is not meat but human beings!
To protect the ship and their livelihoods, Captain ‘Cheol-ju’(Kim Yoon-seok) suggests to his crew members the job in helping to smuggle [stowaways]. Numerous of stowaways who risks their lives and comes across the sea, and the six crew members who are on board a fated boat. Amid that, an unknown ‘sea fog’ to which they cannot see what’s in front of themselves comes down and they become swept into an uncontrollable accident…
《海雾》是以2007年首演的话剧原作为基础，刻画了走私船上人们的悲剧故事。一尺之外都看不清楚的海雾…“海雾”涌现的瞬间，所有的一切都变了！有一段时间在丽水海上纵横的“前进号”再也不能满载而归了，它成为了监测事业的对象。面对失去船只的危机，船长哲洙（金允石饰）认为这是最后的机会，他和船员一起搭上了旧渔船”前进号“。以船长为首，隐身在船上、为人淳厚的机关长宛浩（文成根饰），不声不响地听随船长命令的行动派甲板长浩英（金尚浩饰），认为钱是世界上最好的东西、性格粗鲁的滚轴手景求（刘承睦饰），无论何时都忠实于需求的船员昌旭（李熙俊饰），刚开始船上工作的淳朴老幺船员东植（朴有天饰），这六名船员怀抱满载而归的梦想出航。但是在茫茫大海之上，他们运的并不是鱼而是人！船长哲洙为了保护生活根据地——船只，而向船员们建议帮人偷渡。冒着生命危险远渡大海的无数偷渡者们，以及命运般地同坐一船的6名船员。他们在让人连前方一尺都看不到的”海雾”出现之后被卷入了他们无法控制事态发展的事件中…
Cast: Kim Yun-Seok, Park Yoo-Chun, Han Ye-Ri, Moon Sung-Geun, Kim Sang-Ho 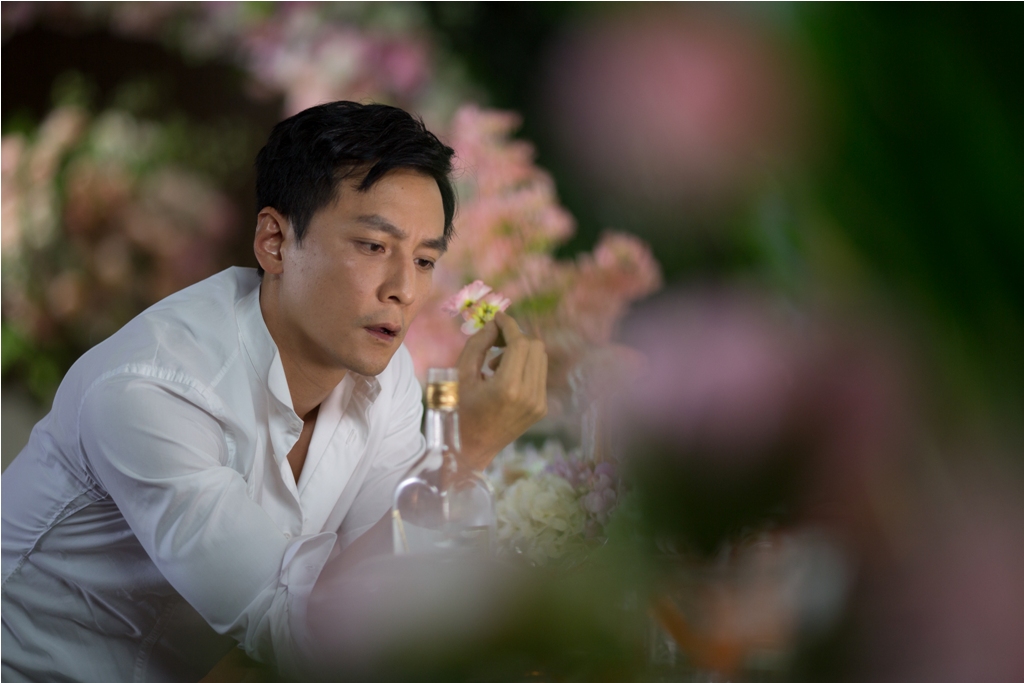 Those who like romantic dramas will enjoy the sequel to Don’t Go Breaking My Heart. Will theprotagonists find new love, or end up with their old flames? The strong cast (and eye candy) is also a crowd puller. 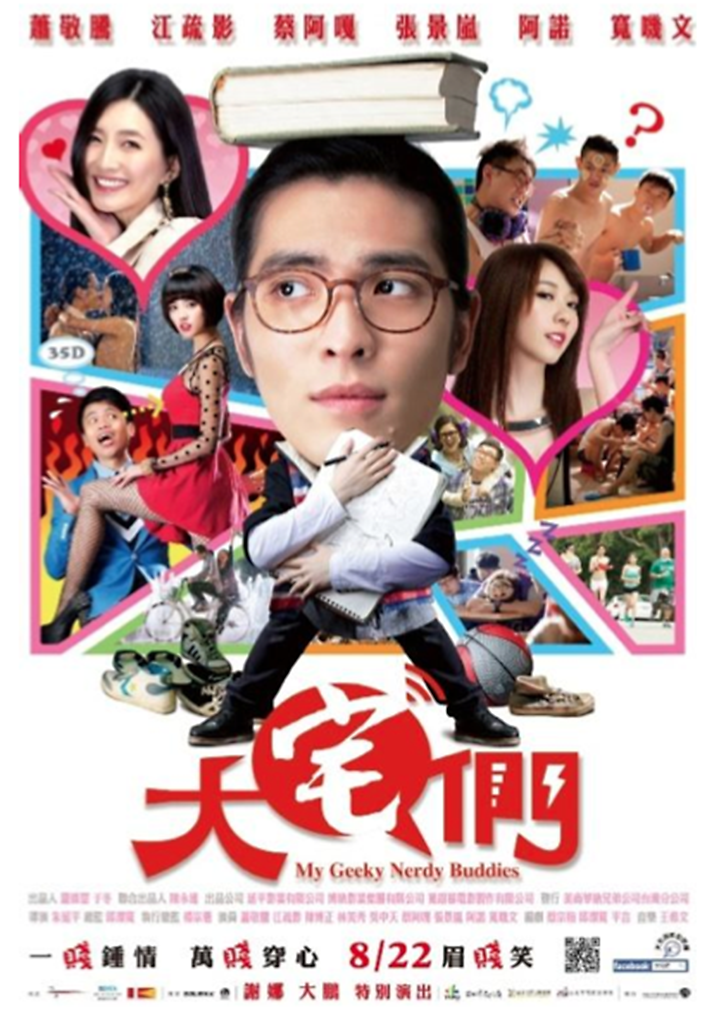 Jam Hsiao is the perfect person to play an otaku. Coupled with the absolutely hilarious (albeit a little cheesy) dialogues, this romantic comedy is great for laughs and some fun time with a date or friends.

MY GEEKY NERDY BUDDIES
大宅男
Singapore Release Date: 30 October 2014
Synopsis:
Otaku (Jam Hsiao) and his roommate Mr. Cheap (Da Peng) as known as the ultimate geeks of their university. However, like any normal guy, their goal is to fall in love with their girls of their dreams. To get close to his goddess Mei (Xie Na), Mr. Cheap pretends to be a spoiled rich kid, appearing everywhere she goes. Meanwhile, the introverted Otaku tries to create a chance to talk to class beauty Ling (Maggie Jiang) by running into her in the hallway, only to have his plan fail awkwardly.
The school’s legendary couples party is fast approaching, and the only person to show up without a date will be etched on the “pillar of shame” and be mocked forever. To avoid this catastrophic fate, Otaku and Mr. Cheap decide to put away lame disguises and try winning their goddesses over by being sincere and earnest. With the dignities of geeks everywhere on the line, a fierce battle for love is about to kick off….”
阿宅和他的四位室友是标准的大学宅男。四个人都没有恋爱经验，不懂得和女生相处，但是积极的想要在大学毕业之前告别单身，可是完全不知道女生在想什么，自己幼稚的行为闹出了许多笑话，但他们依然执著努力的继续追爱。
“文艺宅男”阿宅（萧敬腾饰）和他的室友“屌丝宅男”抠男（大鹏 饰）是大学里的“铁血纯屌丝”，他们最大的梦想就是可以献身女神。抠男为了接近他的“太阳女神”川美（谢娜 饰），假扮富二代，在川美身边神出鬼没，闹出很多笑话。而不善于表达的阿宅则通过“计算与奔跑”努力制造出一次次走廊偶遇，来与“宅男女神”雅玲（江疏影 饰）搭话，但他这些伎俩总会被高冷的雅玲看穿，最后尴尬收场。
一场建校以来最大的情侣PARTY举办在即，作为惯例，大家要成双入对出席，这一晚仍单身的人，他的名字就将会被刻在学校的“耻辱柱”上，成为笑柄。在这个危急存亡的关头，阿宅和抠男决定背水一战，化被动为主动，想尽方式求爱献身，于是，一场角逐的“女神杯”大战降临。
Cast: Jam Hsiao 萧敬腾, Maggie Jiang 江疏影, Xie Na 谢娜, Da Peng 大鹏 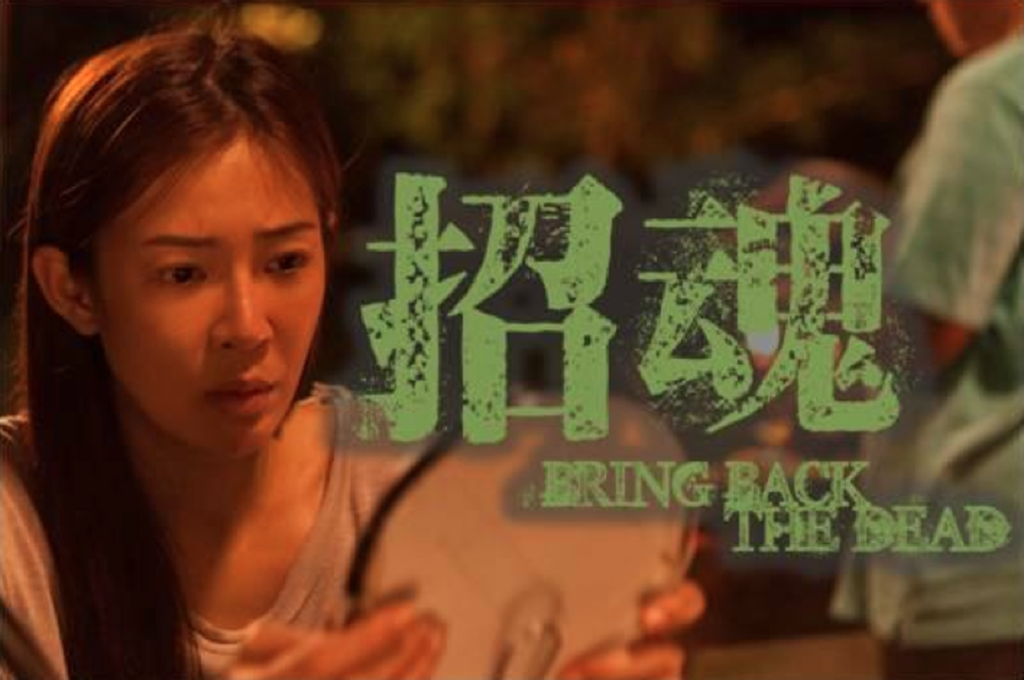 Horror fans may want to catch local production “Bring Back the Dead” starring Singapore’s local talents. Jesseca Liu is a good actress and Seventh-Month personality Liu Ling Ling would be interested to watch too. If, I can find the guts to watch it. :p

BRING BACK THE DEAD
招魂
Singapore Release Date: January 2015
Synopsis:
When her seven-year-old son dies in a tragic road accident, a grieving mother, Jia En (Jesseca Liu), seeks the help of her former caregiver, Mdm Seetoh (Liu Ling Ling), to bring back his soul so he can be ‘by her side’ at home.However, after several strange and deadly occurences in the house, she begins to suspect that there is something amiss with the soul she has brought back. In discovering what has really happened, she unravels the horrific truth … a truth which may cost her her life and the lives of those around her.
当她的独生子因遇车祸不幸丧命时，一个伤心欲绝的嘉恩（刘子绚 饰）因为沉浸于失子的悲伤，决定请小时候照顾她的保姆，司徒姐（刘玲玲 饰）协助她把儿子的灵魂招回她身边。
经过一连串的奇异事件，嘉恩开始质疑自己之前所做的决定。当她渐渐发现迷离事件的真相时，自己与周围的人却早已身处险境。一切是否还有挽回的余地？
Cast: Jesseca Liu (刘芷绚), Jacko Chiang(蒋伟文), Liu Ling Ling (刘玲玲), Eelyn Kok (郭蕙雯) 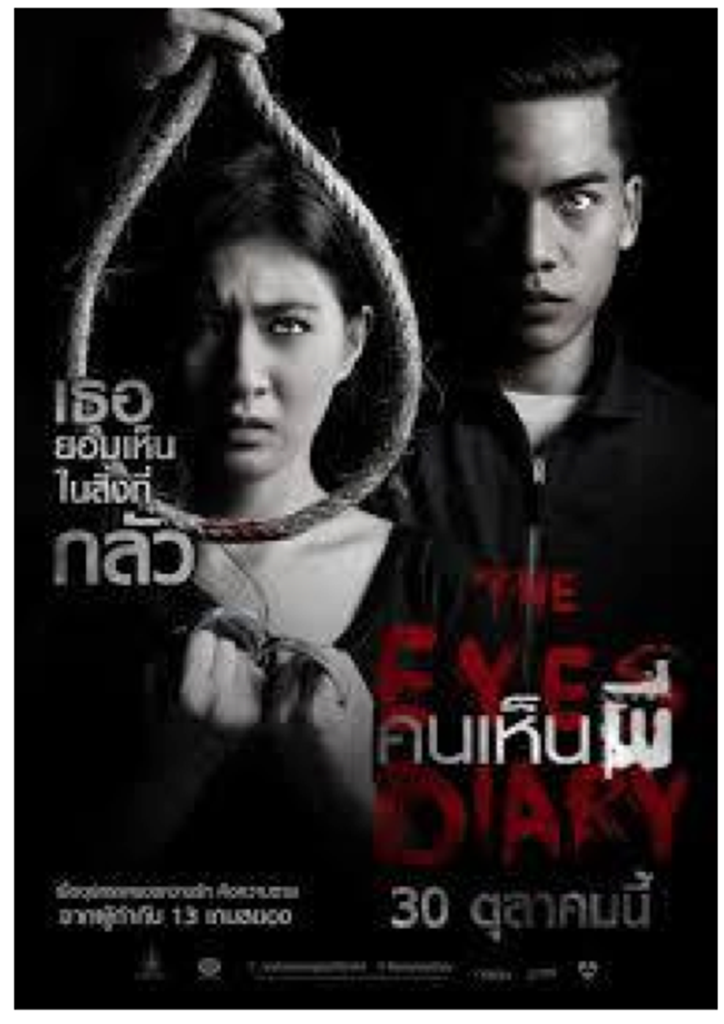 Thai horror flicks are known to be scary, so I am sure horror fans will be looking out for this movie. Now let’s see if I can find my own ‘victim’ to go watch this with me, I think my screams will be just as horrifying :)

THE EYES DIARY
Singapore Release Date: 11 December 2014
Synopsis:
It has been three months since Nott (Punjan) lost his beloved girlfriend, Pla(Focus) in the motorcycle accident. His heart is full of guilt and sorrow and the only way for him to get through this is to meet Pla again in her after life. He tries to find a way to find back Pla’s soul and decides to join the emergency crew volunteer which he has to secretly picked up the belongings of the dead ones himself. He thinks that by doing that he will be able to find back Pla’s soul. However, things are not that simple.
John (Jack) his friend at the volunteer foundation tries to tell him not to ask for problem, seeing spirits are not things to be taken lightly. Nott does not listen and continues to confront the haunting spirits hoping that they may be able to lead him to Pla. Will he be able to meet Pla ? Will he be able to tell Pla what he wants to? He has never expected that everything that is happening is actually under Pla watchful eyes…
Cast: Focus Jirakul, Chonnikan Netjui, Kittisak Patomburana